A Pair of Similar Transactions in Three Metaphors

It is a strange feeling to have your preconceived notions challenged and proven false. I used to believe that Johnson was unreliable or risky thanks to his recent rough times with Oakland and Los Angeles. But since the start of 2011, he’s thrown an average of 69 innings per season and over 1.0 WARP per season. He was very bad in 2014–that 7.09 ERA and nearly six walks per nine innings weren’t excusable–but it was a blip, not the performance level he’s had before or since.

This season was a blip too, but in the other direction. Johnson was always–fairly or not–derided for having a low strikeout rate compared to other high-leverage relievers. In 2016, his age-33 season, he spiked his strikeouts per nine by more than three strikeouts over his career mark. His 9.5 strikeouts per nine were well above anything he’d done before, and provided a final complement to his ability to induce ground-ball contact.

How he’s done it is a little bit of a mystery, but could be tracked back to an increased emphasis on throwing his curveball. Over his career, the bender has been his most effective pitch in terms of getting swings and misses. In 2016, he started leaning on it a bit harder at the expense of his grounder-getting sinker. 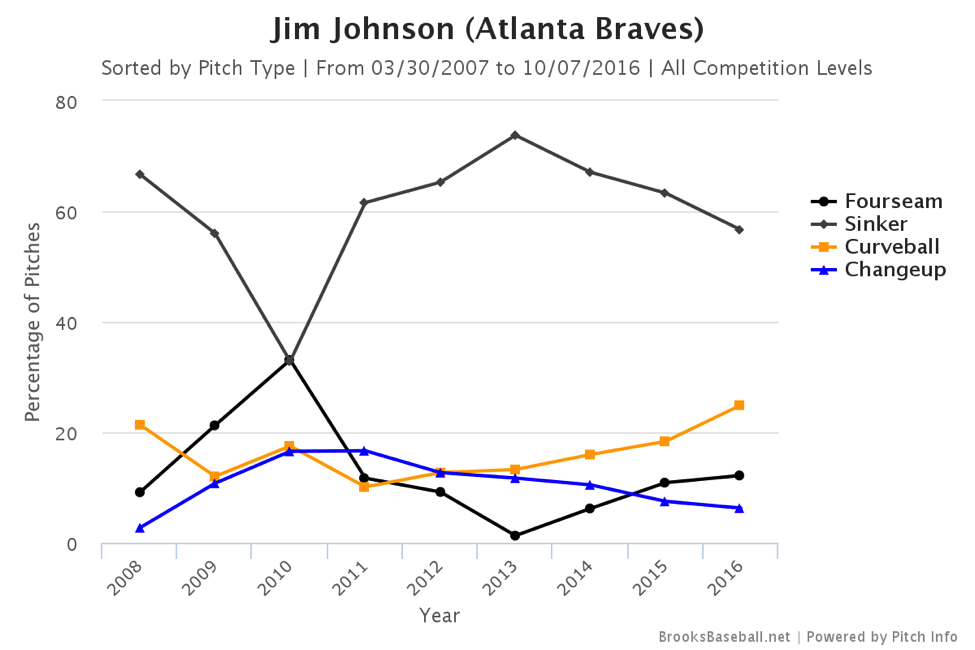 I’m not sure I’d expect this strikeout rate to continue to climb–or even stay as high as it was in 2016–but his pitch selection choice seems to have paid off this past year. Best of all, when the move is a choice rather than simple dumb luck, there could be a better chance that the performance bump may improve. The important point here, though, is that even if he regresses, even if age takes its toll, there’s the chance that he’ll continue to do what he’s done–stay effective in the later innings–even as time marches on.

Stop me if you’ve heard this one before, but I think this is a nice move for the Braves because it gives them the ability to have a solid bullpen arm in the short term, and a worthwhile trade chip in the long term. Perhaps the perception that I have/had of Johnson may depress his value on the trade market, or perhaps the Braves will hold out for too much value and mistakenly hold onto him even as the team continues to flounder. And of course, the money matters–if this restricts them from making moves to improve their god-awful position-player depth, then that’s bad. But Johnson’s reliable in at least one sense, so I do like this as a short-term investment.

This is what it looks like when a prospect “fails,” right? Alcantara was supposed to be golden, the second baseman or super-utility player that helped guide the Cubs into their next phase as a perennial contender, using a blend of speed, power, and versatility to fill in all gaps. In actuality, Alcantara never blossomed in the way many of us imagined, and instead of looking like the “next Ben Zobrist” the Cubs simply went out and got a much more productive player: the real Ben Zobrist. A much higher-ceiling prospect–Javier Baez–has ended up filling the imagined Alcantara role in Chicago.

So what happened to Arismendy? To put it bluntly, his approach in the major leagues has been god-awful, and he was unable the reach the “heights” of his .254 OBP from 2014 in limited action with the Cubs and Athletics over the past couple of seasons. In Triple-A? He’s been fine! Iowa and (especially Nashville) seem to be no big whoop for him, the contact ability plays up in the minors and he’s able to get on base enough to put up solid numbers. But now, even the Athletics–who make their hay on rolling the dice on deeply flawed players–aren’t able to carry his weight on the 40-man roster. So off he goes, into the sunset (read: Cincinnati).

Do we dare try to identify the precise point where prospect-dom dies? Is it worth it to capture the exact moment a player moves from full of potential to an afterthought? I think so, as sad as it may make us. The number of times a “prospect” changes teams may matter the most. Research tells us that if a player doesn’t switch teams, they may be more likely to perform better than a journeyman, and that makes sense. After all, the party with the most information about a player can probably make the best value judgment. If a player moves to his third team, that’s the red-flag zone. If one of those moves isn’t result of a trade, that’s even worse. Alcantara, dealt from the Cubs to the Athletics for a slumping (at the time) Chris Coghlan this year, is now with the Reds, his third team this year.

Age matters, too. T.J. Rivera of the Mets is hardly a prospect despite his hitting performance at all levels of the minors because he is 27 years old. Potential is an important part of prospect-dom, because prospect-dom is about hope and longing and the long view. If you’re one step beyond your age-23 or age-24 season, the shine is either gone, or WAY GONE. You’re either a post-hype prospect, or a post-prospect, depending on the other factors. And then there’s the MLB performance. Running a -0.8 WARP in 351 plate appearances (thanks to a .216 True Average) tells us that something needs to change. If the team has changed, and the development time is running out, checkmate. You’re no longer a prospect. You’re something else, something lesser. You’re an Arismendy.

This is it. This is the two-roads-diverged-in-the-woods moment for Arismendy Alcantara. Welcome to the Kila Ka’aihue zone, the life of the Triple-A player. There’s no shine, no prospect status, no per diem, but there’s still hope. Sometimes these guys pull themselves out of their hole and become productive MLB regulars later in life–just look at Jake Marisnick or Steve Pearce or new teammate Dan Straily or (maybe) Tommy Joseph. By my standards, today was the last day of Alcantara’s run as a failure to become the “next Ben Zobrist” or a critical piece of the first Cubs World Series team in over a century or another magical Billy Beane acquisition. It’s the first day of the rest of his career. Let’s see what else he’s got.

You need to be logged in to comment. Login or Subscribe
jfranco77
If the Reds didn't play in the Great American SmallPark, a team of light-hitting, speedy Swiss Army knives (see also Jose Peraza, Dilson Herrera) might make more sense. Can they move the fences back 100 feet?
Reply to jfranco77
onegameref
Is there any logical explanation for the re-birth of Straily? He bounced around more than a keno ball in a spinning basket and here he is making 31 starts as the nominal ace of the staff. Where did it come from this time?
Reply to onegameref