Off the field, the Cubs had a great day. They signed Theo Epstein, Jed Hoyer, and Jason McLeod to contract extensions, and have made sure that the front office that rebuilt the Cubs into the monster they are today will be around for the foreseeable future. On the field, Wednesday was rough. The Pirates knocked Jake Arrieta around, and the major blow that got things going for the Pirates was a home run by John Jaso that made it 4-1 Bucs in the fourth inning.

Yes, the same John Jaso who went into this game with .125 ISO on the season went deep on Arrieta. As a matter of fact, Jaso wasn’t finished putting Arrieta’s feet to the coals on the evening. In the very next frame, Jaso hit a two-out double to bring in Sean Rodriguez and make it 5-1 Pirates.

Rodriguez was a trend-setter in this regard because after he hit a double, Jaso hit a double of his own. Then David Freese confirmed the trend by hitting an RBI double of his own, and then Eric Fryer hit a single to tack on another run for Pittsburgh. Just like that, the Cubs were down six and, while Arrieta did make it out of the inning on his own instead of receiving the hook from Joe Maddon, it was clear that Arrieta wasn’t going to be long for the evening. This is now the third time that Arrieta’s given up six or more runs to the Pirates this season, so he’s probably pleased that he won’t be seeing Pittsburgh again in October. 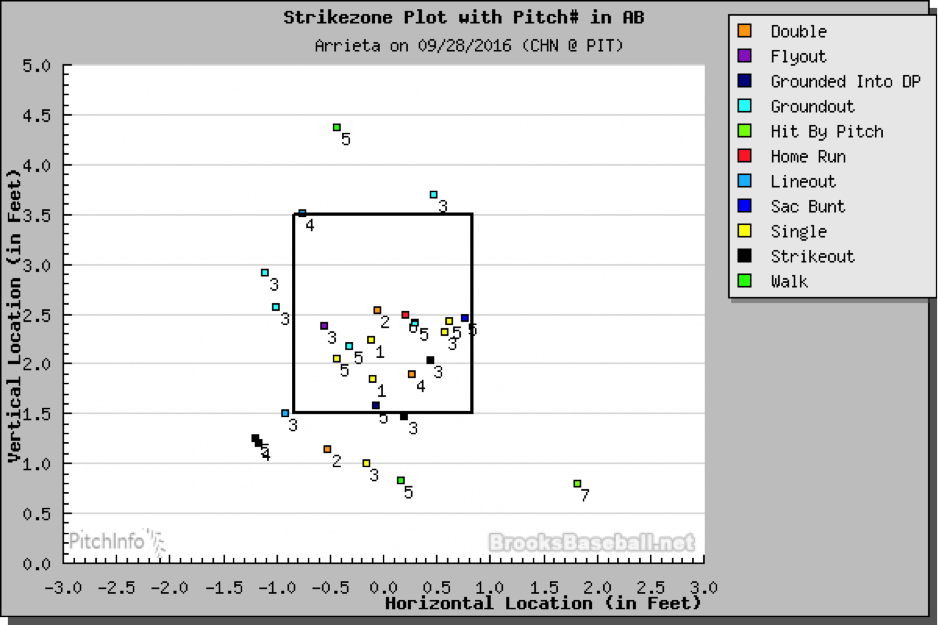 Also, congratulations to PECOTA for coming very close to nailing Arrieta’s ERA on the season.

PECOTA looked silly when it projected a 3.17 ERA for Jake Arrieta. He will finish at 3.10.

While Arrieta may have been done for the evening, Jaso wasn’t done. One thing I didn’t mention earlier was that Jaso had hit a single in the second inning. Thanks to the three-run dinger and the RBI double, he was now a triple away from the cycle. In his fourth at-bat of the evening, Jaso smacked a 95 mph fastball from Pedro Strop into dead center field. It’s as if the ball itself knew what was at stake, because it landed smack dab at the base of the center-field wall, and Jaso scampered to third base and into the PNC Park record book as well–this was the very first cycle in the history of that beautiful gem of a ballpark.

In the long run, this game won’t matter a great deal. The Cubs are probably thankful that Arrieta is getting this out of the way before the games start counting again, and the Pirates will just be happy that they’ve ended a losing streak and still have a chance at finishing the season .500 or above. With that being said, I’d love to meet the person who predicted that John Jaso would be the first player to hit for the cycle at PNC Park. That would be a life-changing conversation.

Jaso wasn’t the only unlikely non-power hitter on Wednesday evening. Hyun Soo Kim had a .113 ISO and a whopping five dingers through 90 games this season for the Orioles. He came off the bench in the ninth inning of their extremely important game against the Blue Jays and this was an extremely opportune time for him to hit his sixth homer of 2016.

The events that unfolded in Toronto meant that no matter what happened in the Bronx between the Yankees and the Red Sox, the crew from Boston would be dousing each other in champagne and celebrating a divisional title as soon as they hit the dugout.

However, the champagne may have had a tiny bit of bitter taste to it because the Red Sox managed to turn a 3-0 lead in the bottom of the ninth inning into a dangerous situation. Craig Kimbrel loaded the bases up, and walked in New York’s first run of the game. For the second time this season, Kimbrel was pulled from the game after running into trouble against the Yankees. 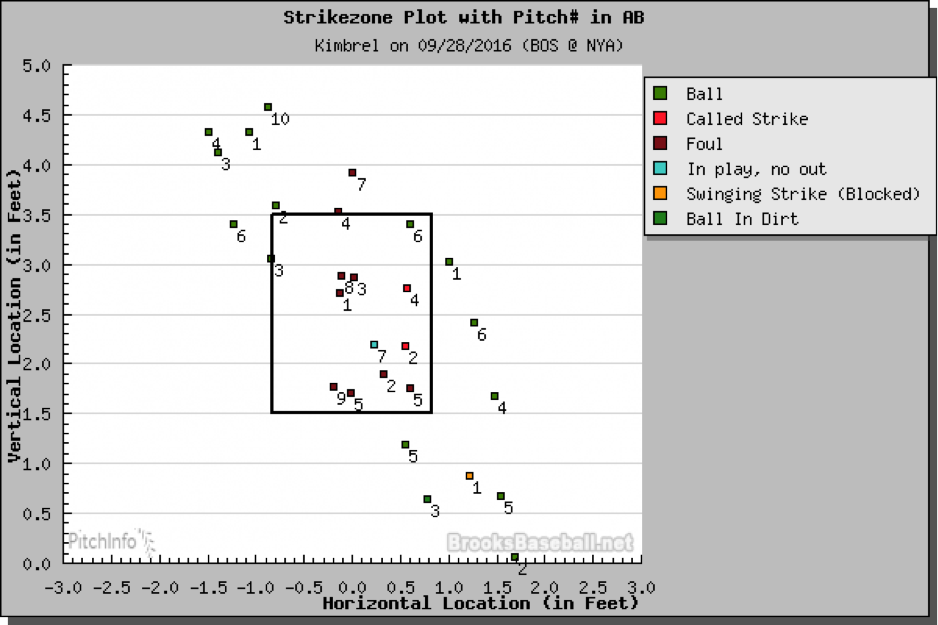 The first time this happened, Matt Barnes was able to get the save by striking out Mark Teixeira. The second time around, it was up to Joe Kelly to ring up Teixeira as out 27 of the night. The Red Sox stayed on 26 outs for the night.

One team who kept a close eye on the complete and utter chaos in the AL East was the Seattle Mariners. They spent the evening watching all of this unfold after picking up a massive 12-4 win over the Houston Astros. Houston’s loss was probably the dagger in their postseason hopes, and Kyle Seager’s three-run shot was the icing on the cake that kept Seattle alive in the Wild Card race for another day.

Tim Anderson is an infielder. He fielded this ground ball in the shallow outfield. He got the runner out at first. These are all facts and I have the visual evidence to prove it.

Once again, all eyes will be on the AL Wild Card tomorrow, as the top two teams in that race will square off against each other and the two remaining dark horses are playing in different towns and are both in must-win situations. The Tigers still have to deal with Cleveland after a long, rain-delayed night on Wednesday, while the Mariners will have a somewhat easier task on their hands as they’ll be taking on the A’s.

Meanwhile, the Orioles and Blue Jays will be wrapping up their season series above the border. There’s already plenty of drama surrounding this game, but if you want the drama factor maximized for the various weekend series that are ahead then you might want to root for Ubaldo Jimenez (4.24 DRA, 106 cFIP) and the O’s. It’s tough to imagine that the Blue Jays will want to stick to that narrative, so it’s safe to say that we’re going to see Marcus Stroman (3.34 DRA, 86 cFIP) and the Jays try their best to create some more breathing room at the top of the AL Wild Card standings.

You need to be logged in to comment. Login or Subscribe
bhacking
I'd argue for maximum drama you want a Baltimore loss and wins by Detroit and Seattle meaning there are 3 teams within 1 game for the final wild card and the Yankees stay alive for one more day. But as you might guess I'm a Blue Jays fan so it's probably just me.
Reply to bhacking