Playoff races, award chases, and all other September baseball storylines took a backseat over the weekend, as news broke early Sunday morning of Jose Fernandez’s tragic death in a boating accident. Our own Mauricio Rubio wrote about what Fernandez meant to the game, on and off the field, on Monday, before the Marlins returned to the field, all wearing no. 16 in honor of their late ace, to host the Mets.

preceded one of the most special moments of the season—perhaps of any season—when the home team came to bat in the last of the first.

Dee Gordon, a left-handed hitter, stepped to the plate with no walkup music, and dug in from the right side to honor Fernandez. After the first pitch, he swapped out his helmet and moved to his customary left-side batter’s box. Two pitches later, he hit the longest drive he can remember ever coming off his bat:

Tears welled in Gordon’s eyes as he rounded the bases and was greeted by a row of hugs from his teammates. It was the first of four hits on the day for Gordon, the first of seven runs for the Fish, and, most importantly, a moment Gordon and the fans in attendance will never forget.

Like their leadoff man, the rest of the Fish batted without their requested songs, leaving Marlins Park eerily silent at times, as everyone present remembered the one who wasn’t there. The Mets embraced the moment, too, offering their support to Marlins in need, showing the class and kinship that unites the baseball fraternity at the toughest of times.

After the 7-3 win, the Marlins formed a circle and placed their hats on the mound,

which bore Fernandez’s no. 16 on its hind slope during a game he was supposed to start.

It’ll be a long time before Marlins homers, Web Gems, and wins feel right without Fernandez dancing and smiling in the dugout—before baseball in Miami is fun again without the 24-year-old who made it so every day he laced up his cleats.

When the month of September began, Jean Segura had two multi-homer games in his career. Now, with almost a week left in the month, he has five.

Segura turned in a pair on consecutive days, punishing the Rockies on September 13-14, and yesterday, he was at it again, this time in the nation’s capital. In the fourth inning, Tanner Roark’s 3-2 challenge proved to be no challenge at all

as Segura launched the 93-mph fastball into the stands in right-center. He went that way again against Lucas Giolito in the eighth,

by which point those stands held about as many Segura souvenirs as they did fans.

Segura now has 19 home runs on the year, to go with 40 doubles and 30 steals. While his power had come and gone before peaking this month, he’s been remarkably consistent in the hit department more generally, entering play today one shy of having 30 knocks in every month.

The D’backs went on to rout the Nationals, 14-4, with Mitch Haniger, Jake Lamb, and Yasmany Tomas contributing one big fly apiece to go with Segura’s two.

The Cubs also booked double-digit runs Monday, dropping a dozen on the Bucs, on a night when fewer would’ve sufficed. But hey, a franchise reaching 100 wins for the first time since 1935 might as well do it in style.

While Javier Baez and Kris Bryant powered the offense, the former with a grand slam and the latter with his 39th blast of the year, Kyle Hendricks took care of the pitching. The right-hander tacked on six shutout innings to his season line, shaving his ERA down below 2.00, to 1.99. He’s one start shy of joining Jake Arrieta as the only Cubs starters to finish at 1.99 or below since 1920.

Arrieta, of course, bagged the National League’s Cy Young Award for his excellence last year. Hendricks is putting forth quite the case to follow suit.

While Arrieta dominated primarily with stuff, Hendricks is stifling foes with command. He threw 93 pitches Monday and barely missed a spot:

Hendricks aimed for the knees and hit those targets with uncanny discipline. His changeup earned seven whiffs in 31 tries. And he struck out five without issuing a walk. That was more than enough for the Cubs to roll, 12-2.

The Indians clinched the AL Central division for the first time since 2007 on Monday, but it wasn’t all smiles on the southern shore of Lake Erie.

Long before the win was secured, Cleveland’s ace, Corey Kluber, departed with tightness in his right groin. The move was classified as precautionary, but you’ll forgive fans in northeast Ohio for holding their breath to see how the right-hander’s leg feels today. They might also fret a bit about third baseman Jose Ramirez, who fouled a pitch hard off his foot but finished the game.

While the Tribe hoped to hear that Kluber and Ramirez are, indeed, all right, the bullpen took care of business in the division clincher. Four relievers combined to record the 15 outs Kluber left on the table, led by Andrew Miller, who got five, four via the strikeout, while throwing 19 of 21 pitches for strikes.

With Lance Lynn and Tyler Lyons sidelined, it hasn’t been easy for Cardinals manager Mike Matheny to settle on a fifth starter this season.

Jaime Garcia got the call Monday and didn’t impress the Reds. He was in a hole early, after an oppo taco from Joey Votto,

immediately followed by a homer from Adam Duvall. Besides flexing their muscles, the Reds also showcased their speed with Garcia on the bump, but their three first-inning steals didn’t yield a run. Jose Peraza, who singled and swiped second to begin the game, was caught stealing third. Brandon Phillips, who singled after the early dinger derby, stole second and third but was stranded 90 feet shy. Nonetheless, per the Baseball-Reference Play Index, Garcia became the first starter to surrender two or more homers and three or more steals in the first inning since Benj Sampson in 1999.

Michael Wacha was called upon to serve in relief of Garcia, and his evening went even worse. It featured nine hits and seven runs in just 2 2/3 innings, including this solo shot by Steve Selsky,

part of a 5-for-5 night for the rookie outfielder.

Then, it was Luke Weaver’s turn, and he fared worst of all. The Florida State product was banged around for five runs in just two-thirds of an inning, which featured two hit batsmen along with four hits, one of them Duvall’s second round-tripper of the day:

The Cardinals fell to a game back of the idle Giants for the NL’s second Wild Card spot. They’ve got work to do to reach the playoffs, but, the good news is, they won’t need to worry about their fifth starter if they get in.

While most of the United States was fixated on the Trump-Clinton debate, our neighbors to the north were free to watch a thriller between the Yankees and Jays. Toronto led 3-2 heading into the top of the ninth, only to blow that lead and then some, as the Bombers scored five times against Jason Grilli and company, aided by long flies from Mark Teixeira and Aaron Hicks. Then, all that good work at the plate threatened to be undone by their own closer, Dellin Betances, who walked two, threw a wild pitch, and botched a bunt play before Tommy Layne came to his rescue, not only with his arm, but also with his glove:

The southpaw’s outstanding effort to get the force at a vacated home plate on a swinging bunt by Russell Martin was critical in allowing the Yankees to hold on, 7-5.

The major-league season is a grind, particularly as the playoffs approach, as players eclipse their career highs in games played, as the pressure mounts for clubs on the periphery of continuing their campaigns into October. After an uneven first three weeks of September, the Orioles rebounded over the weekend to sweep the Diamondbacks and solidify their hold on a Wild Card spot. One of their players, though, is still searching for a second wind to lift him out of a prolonged slump.

Jonathan Schoop is the league’s leader in games played at 156, which, with six to go, means he hasn’t missed one yet. The Orioles took the field 17 times in 17 days before taking Monday off, and each time, Schoop was in the starting nine. But with each passing day, the second baseman sank deeper and deeper into his ongoing rut. He went 0-for-12 during the weekend sweep over the Diamondbacks and has just 11 hits in his last 67 at-bats. His slash line over that stretch is .164/.176/.328. It includes just one walk.

The 24-year-old has never shown much plate discipline, striking out nearly seven times per walk on the season, but he’s generally compensated with power, cranking 36 doubles and 24 home runs. When Schoop is on, he feasts on mistakes middle-middle and high: 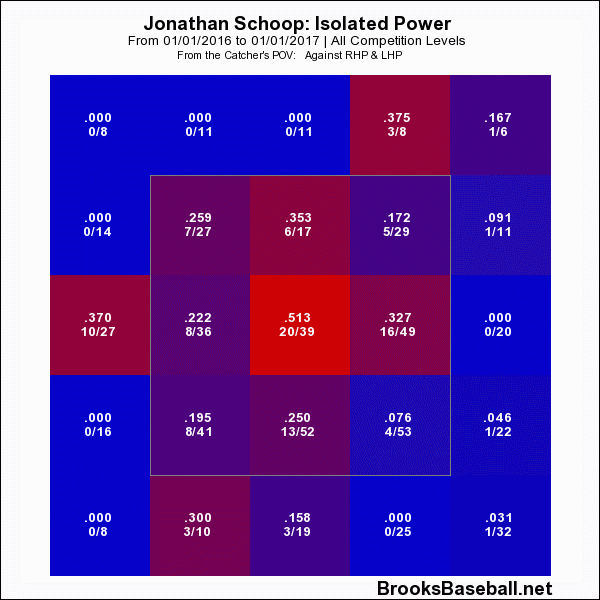 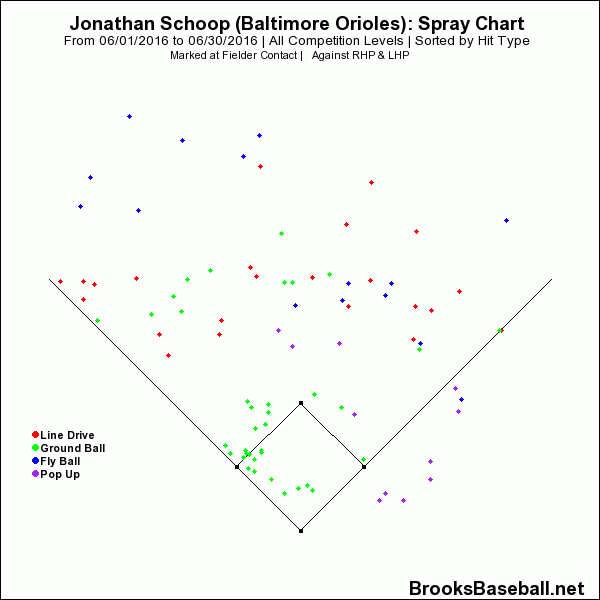 September Schoop hasn’t been doing much of that: 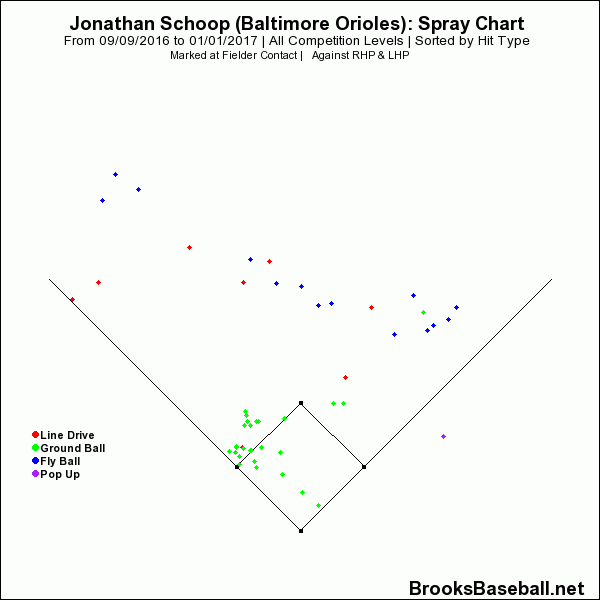 Instead, he’s spent the past two-and-a-half weeks hitting rollover grounders and shallow pops to right. Schoop’s line-drive rate for the month is 10.3 percent; his ground-ball rate is 54.4. Both are well astray of his norms and ideals. And with the playoffs right around the corner, the Orioles need their keystone-minder back on track.

We’ll find out tonight if the rest day helps Schoop to muster up the energy to finish strong. The Orioles are a game up on the Blue Jays as they begin a three-game series at Rogers Centre with Kevin Gausman and Aaron Sanchez squaring off tonight (7:07 p.m. ET).