The Tuesday Takeaway
Meaningful baseball has been relatively scarce for the A’s this year, as is typically the case for a team whose playoff odds have been below the 5 percent mark since early June. But there was meaning aplenty in Tuesday’s game, if only in a symbolic sense: from the third inning on, Oakland was playing under protest.

Baseball under protest is weird in that it looks exactly like baseball without protest (baseball over protest?) and, far more often than not, it ends up not being baseball under protest at all—many teams decline to formally file the necessary paperwork, and even when they choose to do so, their protests are basically never upheld. Per Project Retrosheet, there are just 15 examples of games continued after a successfully overturned protest, and there is but one from this century.

After the game, it became clear that Tuesday’s A’s will not join that set, as manager Bob Melvin said that the protest had been rescinded. The play in question: in the top of the third, with Teoscar Hernandez on first base and no one out, Yonder Alonso fielded a Jake Marisnick bunt on a bounce—seemingly tagging Marisnick as he dove toward first, and then Hernandez, who had not made a run for second and stepped off the bag as Alonso made the tag of Marisnick.

Or not. Everyone was confused. 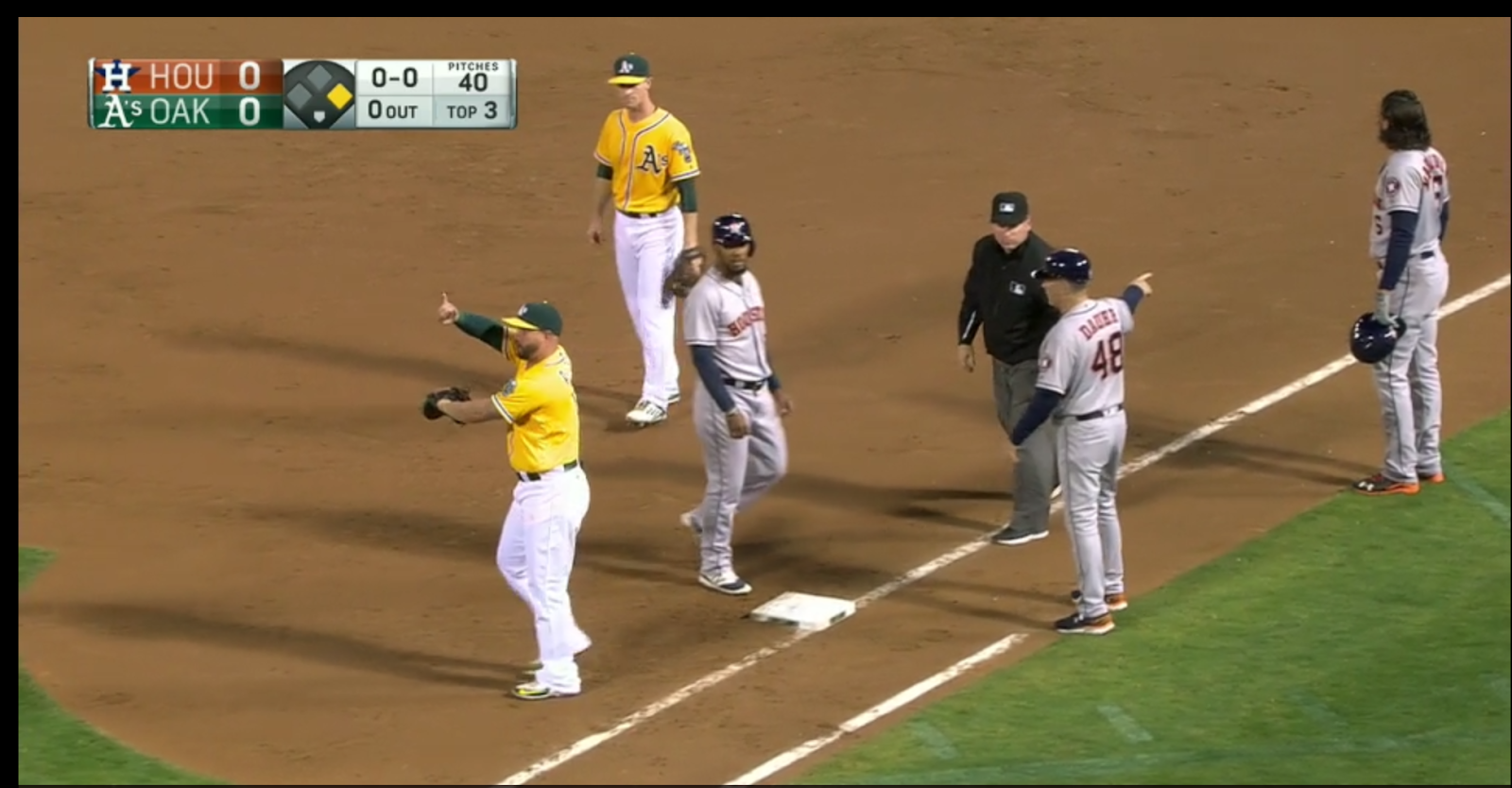 Marisnick was called safe, leading A’s manager Bob Melvin to challenge. A replay review brought a reversal, but not the one Melvin had been looking for—under the new call, Marisnick was in fact out, but Hernandez was safe, with the replay official saying that Hernandez had been reacting to the incorrect call on Marisnick and therefore should be awarded first base. Oakland did not agree, and so—

The A's are playing this game under protest. pic.twitter.com/2yx6qIn4fV

Ultimately, the baserunner didn’t matter, as Sean Manaea got Yulieski Gurriel to ground into an inning-ending double play two batters later. The A’s didn’t get their first hit off of Astros starter Joe Musgrove until the sixth, but the one run they scored in the inning for a 1-0 lead was matched by Houston in the very next frame, and the game remained tied long enough to call for extra innings. But an Astros run in the top of the 10th went unanswered by the A’s, who loaded the bases and left them that way, and Oakland took a 2-1 loss along with their revoked protest.

Quick Hits
Terry Francona’s willingness to defy convention with his use of closer Andrew Miller is no secret, and he continued to do so Tuesday. For the 15th time in 21 appearances, Miller was brought out before the ninth—this time with one out in the eighth in a 1-1 game against the Royals.

It paid off for Cleveland, as it so often has, with Miller being predictably lights out and making Kansas City look very silly indeed on three strikeouts.

In the bottom of the ninth, Brandon Guyer backed him up with a single to score Coco Crisp and walk it off for Cleveland—their best-in-baseball 11th walk-off win, dropping their magic number to six.

David Ortiz added a bit more to the glory of his last season with his 36th home run of 2016 (breaking the record for the most by a player in his final year, assuming this remains his final year). The three-run shot helped push the Red Sox to a 5-2 win over the Orioles, along with a strong performance by starter Eduardo Rodriguez. Now riding a six-game win streak, the Red Sox have a magic number of eight to win the division, while the Orioles still hold the second wild card spot.

The Giants’ bullpen with a one-run lead has been a rather frightening thing of late. So Brandon Belt added a little insurance with a solo shot to give San Francisco a 2-0 lead over L.A. in the top of the ninth…. and this time, it held up. A 1-2-3 inning by Sergio Romo gave the Giants the win, putting them in a three-way tie for the two wild card spots with the Cardinals and Mets, along with making their record with a ninth-inning lead this September a bit more respectable (seven wins, five losses).

The Marlins’ win over the Nationals was close (1-0) and efficient (just two hours and 11 minutes), powered by strong nights from each of Miami’s biggest stars. In eight shutout innings, Jose Fernandez walked none and struck out 12, while Giancarlo Stanton provided the game’s only offense with a solo shot.

The behind-the-back grab was the first half of a double play and part of an eventual 5-4 Rangers victory over the Angels, which led to this glorious Mike Scioscia face.

What to Watch on Wednesday
Monday, Rick Porcello added to his Cy Young case with a 89-pitch complete game; Wednesday, three of his closest competitors for the award will have a chance to answer. Chris Sale, Masahiro Tanaka and Corey Kluber will all be in action—against the Phillies at 7:05 EST, the Rays at 7:10, and the Royals at 7:10, respectively.