The date was July 6, 2016, and Wil Myers’ OPS cracked .900 for the first (and only) time this season. At that point Myers was hitting .295/.360/.543 with 19 homers and 19 doubles through 83 games, having ridden an 11 home run June to put his name squarely in the running for the league’s best all-around first baseman. An 0-for-5 on July 7 put the OPS back under .900 for good, and a post All-Star break slump plus an inexplicable stretch in mid-August where Myers struck out 20 times in 38 plate appearances conspired to put Myers’ current slash line at a more pedestrian .260/.334/.459. In the second half, Joey Votto has pulled an anti-Myers, hitting .412/.498/.649 (whoa!) while Paul Goldschmidt and Freddie Freeman still exist, despite their respective team’s tailspins. And there’s Anthony Rizzo, too, whom Padres fans know as “The Guy We Once Traded to Make Room for Yonder Alonso.” Myers, steadfastly slumping since his scorching June, is no longer in the running for the league’s best first baseman. But what—exactly—should Padres fans expect from their gregarious power hitter going forward?

The easy answer, of course, is that he’ll probably perform in the future something like he has in the past. On the surface, Myers doesn’t even look like a particularly perplexing case: His TAv this season (.291) is just three points higher than his TAv from last season, 11 points higher than his career TAv, and 16 points higher than his rest-of-season PECOTA projection. According to the numbers, this is just Wil Myers being Wil Myers—in fact, he’s actually surpassed expectations some, and at just 25 years old, he’s a solid bet to keep this up for a few years. Then again, it’s hard not to clamor for something more, at least once you recall the prospect pedigree and the injury-riddle past and the breakout rookie season in Tampa Bay and the occasional bouts of brilliance so far in San Diego.

Streakiness
This is dangerous territory. All hitters are inherently streaky, to some degree, and if you break down their seasons into small, bite-sized segments you’re bound to unbury some quirky stuff. But Myers might be taking it to another level. Here’s a smattering of his worst (non-overlapping) stretches of at least 30 plate appearances this season:

That stretch in May can probably be excused as just a guy hitting into some bad luck, mostly. Nothing about Myers’ secondary stats over that stretch indicates much more, and even his exit velocity (per Baseball Savant) during that period was 88.1 mph, just a click below his 2016 average of 89.2.

But it’s hard to imagine a player of Myers’ caliber performing worse over a nine-game stretch than that mid-August slumber, where Myers K’d at least twice in seven different games (including, at one point, seven straight whiffs) while dropping his OPS 35 points . . . in the middle of August, some 500 plate appearances into the season. What’s concerning about Myers’ slumps—besides the one in May—is that they aren’t forming solely due to bad luck on batted balls or the random downturns of a long season. Instead, it’s like he just forgets how to hit for a couple weeks at a time, which is the kind of thing that eventually starts to drag down overall numbers. The strikeout rates skyrocket, the walk rates crater, and the power disappears. In that Tampa Bay series, here’s Myers swinging through a 2-1 fastball down the heart of the plate:

And, a few pitches later, a 3-2 fastball in pretty much the same location:

Myers can be excused for swinging through 95 mph heat up in the zone, but there’s a pattern to his slumping at-bats that’s not unfamiliar to the struggling hitter: He’s taking the pitches he should swing at, swinging at the ones he shouldn’t, and missing or fouling off the ones where he guesses right.

Strikeouts
The old standby for a first baseman is a slow-footed three true outcomes slugger. Those guys still exist, certainly (Chris Davis and Mike Napoli say hello), but there’s a new breed of first sackers who count contact as a valuable skill. Compare Myers’ strikeout numbers to the previously mentioned quartet of National League first basemen (and throw in Matt Carpenter to boot):

Of the group, only Freeman is striking out as much as Myers this season, and he has 30 home runs and 76 extra-base hits. What’s most concerning about the whiff is that it’s been taking over Myers’ game of late, as his strikeout percentage jumped from 20.6 percent in the first half to 29.9 percent in the second half. Only four qualified hitters—Davis, Napoli, Steven Souza, and Chris Carter—have survived the season with a 30-plus percent strikeout rate, and it doesn’t look like Myers is the rare breed of hitter who can flourish while striking out nearly a third of the time.

It also pays to put the ball in play (now more than ever), as players like Brian Dozier—yes, that Brian Dozier, the second baseman listed at 5’11,’’ 200 pounds—have taken advantage of baseball’s new offense-friendly era to top the 40-homer mark. Depending on how the last few weeks of the season shake out, 10 or more players could crack 40 home runs, which would be seven more than in 2013 and 2014 combined. Myers, stuck on 25 homers, will likely have to put the ball in play more frequently if he’s to reach Dozierian power totals.

Take a closer look at his back leg: 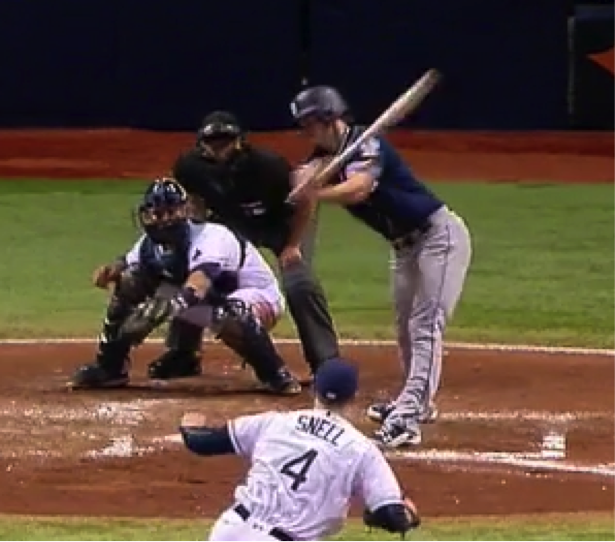 Okay, so that’s a really ugly swing, and Myers was fooled on an outside pitch. Maybe it’s just a one-time thing.

Maybe not. Here’s a slo-mo of a Myers double, first noted by Chris Bauer at Padres Public:

It turns out that Myers has what one might define as “strange back leg mechanics” on a bunch of his swings. Here are images of a pulled double right at contact and just after: 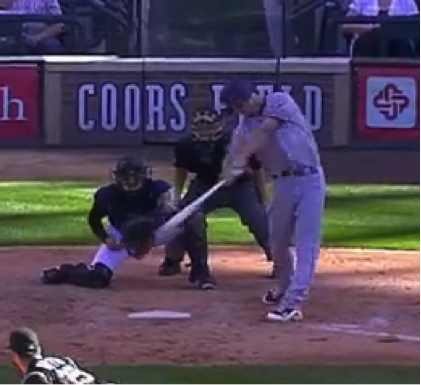 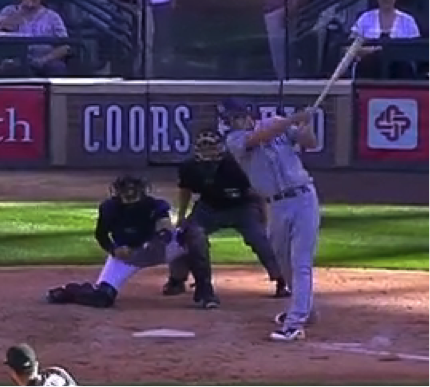 Here’s Myers on a June homer, just after contact: 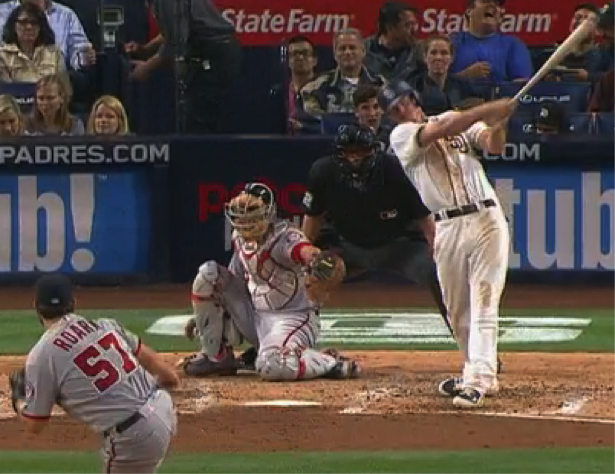 And, finally, another side view on a foul tip: 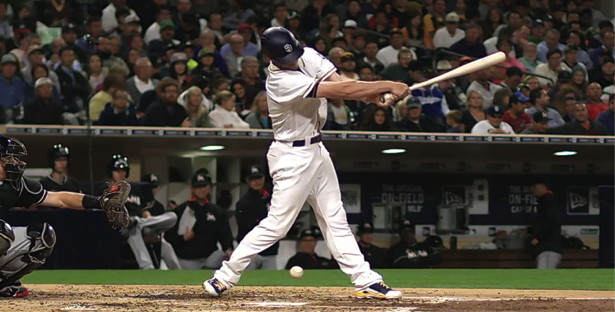 In the conventional major-league swing, at contact, the back foot is usually pointed straight down and often just barely touching the ground. Compare, say, Albert Pujols to Myers: 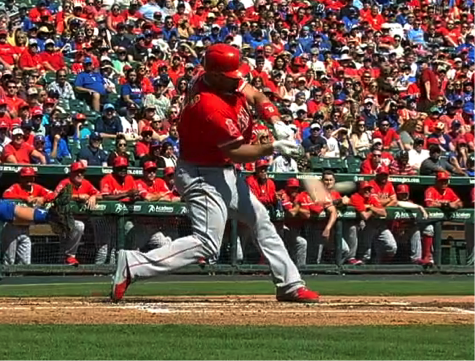 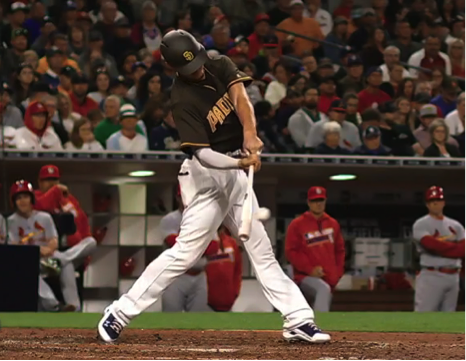 Note how Pujols’ back leg—and his entire backside—is into the swing. Myers is all upper body, seemingly too stiff and upright and arms-y, losing valuable pop by neglecting to use the full rotational force of his lower half. There have always been some concerns about the finer points of Myers’ swing, though he’s also largely succeeded with it. If he’s going to tap further into his power potential, though, his swing—and plate approach, in general—could probably use an offseason tune-up.

Thing is, Myers is still a good ballplayer, even without further refinement. He’s transitioned to first base wonderfully, with most defensive metrics rating him well above average, and he’s quietly stolen 25 bases in 31 attempts (he ranks 28th in the majors in BRR). He’s also a late-season hot streak away from posting a .300-plus TAv and a 4 WAR(P) season, and even if his batting line doesn’t budge over the season’s final couple weeks, his TAv will finish within spitting distance of players like Adrian Gonzalez, Jose Abreu, and Hanley Ramirez.

Of course, we always want more. While Myers is still a ways off from making Padres fans forget about Anthony Rizzo—or even Trea Turner—he’s also this close, seemingly, to having everything click. He’ll turn just 26 in December and he’s already shown the ability to adjust, and quickly—from a laughably bad center fielder in 2015 who posed no threat on the bases to a fine defensive first baseman with legit base running cred in 2016. His most important adjustment will come next, however, and we’ll see whether Myers can turn from a good hitter into a great one, fulfilling the last ounce of the wild expectations we placed on him.

You need to be logged in to comment. Login or Subscribe
Wecdsb
excellent article, one of the best I've read this year
Reply to Wecdsb
dutt22
Thank you. Glad you enjoyed it!
Reply to dutt22