There are numbers in baseball that may live forever, records that will almost assuredly outlive us. Ripken's 2,632, DiMaggio's 56, Ryan's 5,714, Vander Meer's 2: they're all achievements so prodigious, so incomparable that they don't need units.

But there are also records that linger not because they can't be broken, but because the game turned away from them. They're the outliers of bygone eras, vestigial accomplishments, like inherited stamp collections. Jack Taylor holds the record for most consecutive games without being relieved, at 202. It's a record that says more about Taylor's era, 1901-1906, than it does about the pitcher itself. The same is true for the 101 road losses of the 1899 Cleveland Spiders. These events are so out of frequency with what we now partake as "baseball" that they're no longer records, any more than "some" is the record for dinosaurs born in a year.

There is one "unbreakable" record included among these that was set in very modern times to great fanfare. It was one of my favorite baseball numbers, because it belonged to my favorite baseball player as a boy: 130, the number of stolen bases by one Rickey Nelson Henley Henderson in 1982.

It's not even the record people think it is: 130 isn't the most stolen bases in a season in major league history. That mark belongs to Hugh Nicol, who stole 138 bases in 1887. His one weird trick: advancing an extra base on a hit back then was enough to count as a stolen base. (Before you make any hasty reassessments to your worldview, please note that Rickey advanced an extra 22 bases off singles and doubles in 1982.)

But at the time, exciting as it was, there was no reason to think that 130 would be a permanent fixture in baseball's statistical attic. The previous modern record, Lou Brock's 118, was less than a decade old, and not only was it supposed that Henderson could top it himself, he was also surrounded by a fleet of like-footed comrades in Tim Raines (71 stolen bases in a strike-shortened 1981) , Ron LeFlore (97 in 1980) and Willie Wilson (83 in 1979). But as Rob Mains detailed in an excellent recent article, Henderson's next challenger, Vince Coleman, couldn't get on base often enough to threaten the mark. And after that, the Loftons and Grissoms (and eventually, the Hamiltons) that came after were taught to be a little more responsible in their footwork.

One of the anti-fun facts of the early sabermetric revolution was that Henderson's stolen bases hardly amounted to any value at all. The venerable Baseball Between the Numbers cited the value of all 172 stolen base attempts at a net of 1.6 runs. That number has been since revised to 5.3, and fails to mention all the other baserunning value, the Hugh Nicol specials, that actually made Henderson's 1982 the third most valuable season on the basepaths measured.

But let's not get wrapped up in value; Henderson's in the Hall and the 1982 Athletics aren't going anywhere. So what did this strange, anachronistic season look like? I dug into Henderson's numbers to see exactly how 130 came to be, and exactly how real that number was.

First, a breakdown of his stolen base attempts, compared against the number of times he had an open bag in front of him:

The table above omits certain things. It disregards situations where the base ahead of Henderson is home plate, given that stealing home was dead by Henderson's time. (In fact, the sole straight steal of home in Rickey's career came on 7/26/82.) It also disregards the ten (!) times Henderson was picked off first that year, a full quarter of his times caught stealing, since the out was made before really having an opportunity to run. And finally, since Retrosheet lacks pitch count data from this far back, it fails to incorporate events in which Henderson failed to steal second because the batter swung at the first pitch.

With those provisions, Henderson attempted a steal on more than half of his opportunities, and almost two-thirds when he was heading to second. Interestingly, the extra caution that Henderson showed toward stealing the more difficult base failed to improve his chances of success. 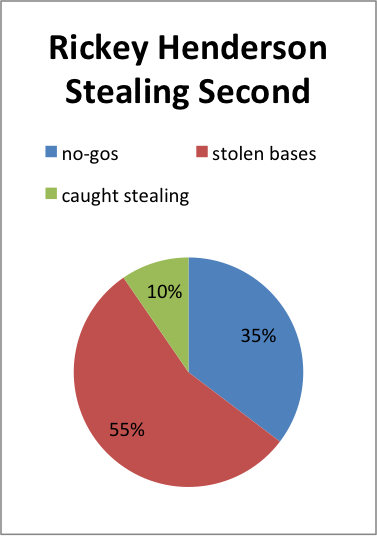 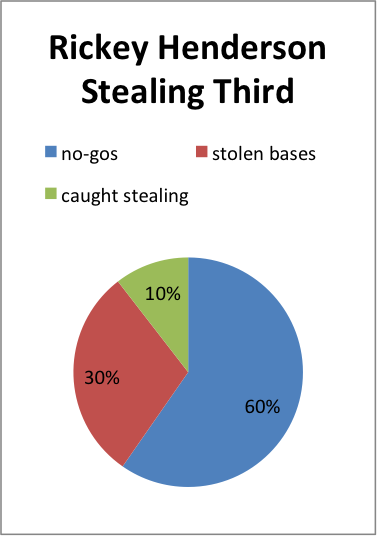 But the primary purpose for this research is to ask: Were the unwritten rules a factor in the number 130? The stolen base record carries a stigma absent among hitter and pitcher performances: there are times when the runner is expected not to run. Many people at the time saw the exponential growth of steals in the late 70s and early 80s and assumed that it was the kids who were to blame. It wasn't that runners were better or that there were generational talents; it was that, unlike the good old days, guys were just stealing when they weren't supposed to.

If this mentality seems like a relic of a tobacco-stained, stagflation-haunted era, please disabuse: the Rays and Red Sox enjoyed a brawl just two seasons ago when Yunel Escobar stole third base with his team up five runs. The exact differential that serves as the tipping point, as well as whether the integers in question must be positive or just an absolute value, remains up for debate. But it was an important enough factor that Ron Fimrite of Sports Illustrated, in his cover article recapping Henderson's achievement, devoted several paragraphs to the philosophical problem. Its fiercest defender, Sparky Anderson, gave this definition: "All I know is that Joe Morgan never stole a base when it didn't mean anything and never when we [the old Cincinnati Reds] were either ahead or behind by four runs. If you're losing 7-0 and steal a base, what's that got to do with the game? I wouldn't count those."

The story of Henderson's quest for stolen base no. 119, told in the link above, is wonderfully chaotic and purely baseball. To summarize, the A's faced the Tigers in the last contest before a 10-game road trip, and manager Billy Martin desperately hoped that Henderson could set the mark at home. In his last plate appearance Henderson did reach, but his destination was blocked by the lead-footed Fred Stanley, who previously had walked on four badly-missed pitches. Stanley obliged by letting himself get picked off, clearing the path ahead, only to have Henderson gunned down on a pitchout.

According to a second source, Fimrite doesn't do the comedy justice: Martin ordered Stanley, owner of 11 career stolen bases, to steal third. Stanley decided to do this by taking a walking lead and to not stop walking. Bad game theory ensued: Sparky, intent on keeping Henderson's destination occupied, called out to his fielders not to tag him. But Stanley trudged on, and it became clear that second was soon going to be open regardless.

It led to a wonderful quote:

But Anderson was the most outraged of all. Stanley, he said, had "discredited the game" by, in Anderson's opinion, allowing himself to get picked off. "This has to stand with the Black Sox scandal," said Anderson. "Stanley should have to pay for it. The commissioner should give him the biggest fine ever. I don't see how that guy can live with himself."

Baseball somehow survived Fred Stanley, and Henderson quickly stole the key base in Milwaukee. But was Henderson simply ignoring the unwritten rules for selfish profit? A breakdown of Henderson's stolen base opportunities, by run state: 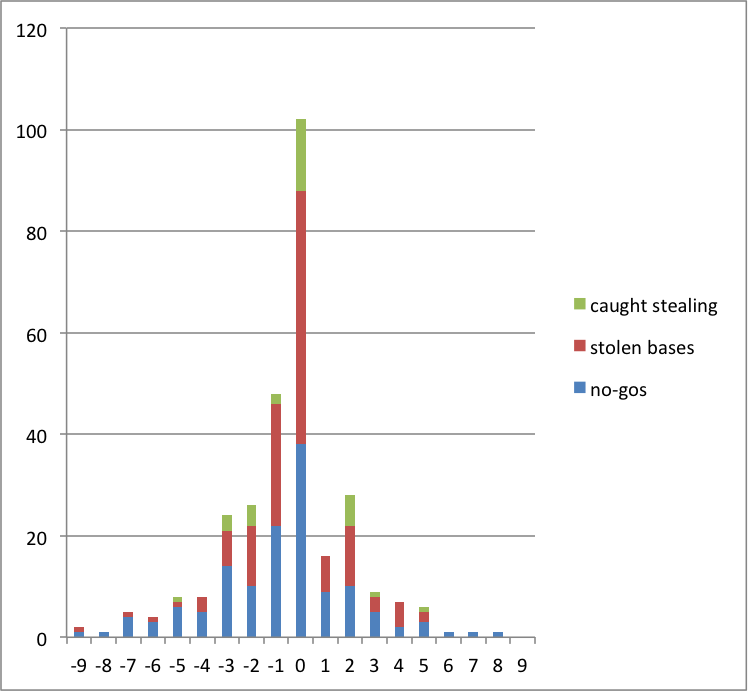 It turns out that if you take away all of Henderson's stolen bases outside of the three-run window, he would have stolen a mere 116 bases on the season, two shy of Brock's mark, not that it would have been Brock's mark either with such ridiculous constrictions.

But my thought process went the opposite direction: Were there untapped opportunities that Henderson passed up to avoid angering old men? If 130 is what happened, what would the true number be if Rickey just flouted societal norms? It turns out that the answer is underwhelming. After all, the 1982 Athletics were a terrible baseball team, with only unheralded Dwayne Murphy and part-time DH Jeff Burroughs standing in as even above-average hitters. Of Henderson's 297 stolen base opportunities, only 16 came with his team up four runs or more, and only three when the A's were truly blowing out an opponent. So the magical 130 could have been… 133. When you look at it that way, 130 looks nicer anyway. Cleaner.

Last week I wrote about numbers and how they can obfuscate or even impair change; if there's a lesson to be learned from all this analysis it's that they're equally bad about implying certainty. The numbers that come to us arrive out of a host of possibilities, some more likely than others, others more repeatable. This difficult, often forced incorporation of probability theory is what gets us #process T-shirts. But it can also be applied to the past, and remind us that what we know is only a tiny fraction of what we could have known, had things been a little different. Rickey's 130 could well have been 133, or 116, or 152. Maybe Rickey doesn't pull his hamstring in early September and miss two weeks. Maybe Rickey picks football. Maybe Rickey steals no. 119 in front of the home crowd that day, and something changes. Maybe Dwayne Murphy swings at some first pitches he really likes to help his own batting average.

Numbers are so specific that they sometimes feel fated, as though what happened also had to happen. We don't have time to mess around with all the hypotheticals, but sometimes looking at what didn't happen makes it easier to appreciate what did.

You need to be logged in to comment. Login or Subscribe
jdaniel17
Here's another one that won't likely be broken. In May of 1980, Rickey and the A's stole 20 bases of John Wathan.
Reply to jdaniel17
LlarryA
Remember also, Wathan was no slouch on the basepaths himself. He stole 36 in '82.
Reply to LlarryA
poorlittlefool
Well done, Patrick. Informative AND entertaining - thank you.
Reply to poorlittlefool
jdeich
Rickey thought it was policy that articles written about Rickey would eschew all pronoun and surname references that could be replaced by "Rickey".
Reply to jdeich
danrnelson
Loved the article, love Rickey, hate this:

"All I know is that Joe Morgan never stole a base when it didn't mean anything and never when we [the old Cincinnati Reds] were either ahead or behind by four runs. If you're losing 7-0 and steal a base, what's that got to do with the game? I wouldn't count those."

By that logic, if you're losing 7-0, you might as well forfeit altogether. So, so, so incredibly stupid.
Reply to danrnelson