It’s tough to make the playoffs—let alone win your division—if you sink to 12 games underwater against one opponent.

The Astros were trying to avoid that fate last night, and for a while, things were going swimmingly. Brad Peacock turned in six strong innings, holding the Rangers to an Adrian Beltre special that, thankfully for Houston, came with nobody on base:

Jose Altuve, who’d been mired in a 12-for-73 skid since August 24th, busted out of it with three hits, including this game-tying solo shot,

and after Jason Castro went yard in the sixth, the Astros were ahead 2-1.

Will Harris and Luke Gregerson saw that margin through to the ninth, where Ken Giles was waiting for duty. After some early-season long-ball woes, Giles had settled into a groove. In 25 1/3 innings dating back to the start of July, he’d given up just 15 hits and six walks while striking out 46.

If Giles had one unresolved wart, though, it was that, on occasion, his pitches could be too nasty for his own good. Like this one:

Instead of becoming the second out of the inning, Rougned Odor took first on the wild pitch. Odor then stole second, but Mitch Moreland struck out, and the Astros were an out away from victory. That is, until Elvis Andrus tripled:

On the very next pitch, Jurickson Profar singled, and just like that, the Rangers were in front. Giles proceeded to uncork another wild one, his second of the inning and 12th of the season, setting the stage for a near-calamitous error by rookie Alex Bregman, who recovered to throw Profar out at the plate and end the inning:

Now, the Rangers were up one, and for their save opportunity, Jeff Banister turned to Tanner Scheppers, making just his fourth appearance of the season and looking for his first save since August 6th, 2013. He got it, retiring George Springer, Bregman, and Altuve in order to lock down the 3-2 win.

With that heartbreaker, the Astros fell to 3-15 against the Rangers. They’re 72-55 against everyone else. When A.J. Hinch’s club plays anyone but its Lone Star State rivals, it’s on a 92-win pace. But those 19 all-Texas battles do count. And with them included, Houston drops to 4 ½ back with just 17 left to play.

There’s never a bad time for one’s first career home run. But an undrafted, 27-year-old rookie breaking out the big bat in a tie game in extra innings, in the midst of a tight wild-card race? That’s a special moment indeed:

T.J. Rivera’s 10th-inning solo shot, the first given up by Mark Melancon in a Nationals uniform, helped Mets fans quickly forget the ninth-inning ground attack that led to Jeurys Familia’s blown save.

And as terrific a feel-good moment as Rivera’s game-winning homer was, the Mets have to feel equally good about the work of Noah Syndergaard. Thor crossed 200 strikeouts for the season on Tuesday, and kept on K’ing the Nationals, racking up 10 in seven innings before his night was over. It was Syndergaard’s first double-digit-strikeout start since June 15th against Pittsburgh, and with just one walk on the night, he showed renewed command of his power arsenal after battling his control in Cincinnati six days earlier.

The Mets snuck to within a half-game of the Giants—who blew a three-run lead in the ninth and fell to the Padres—for the race to host the National League’s one-game playoff.

It’s hardly a secret, at this point, that the Dodgers offense frequently stumbles when faced with a southpaw starter. Dave Roberts’ squad came into play Tuesday 63-43 when taking on a right-handed pitcher, compared to just 18-19 against lefties. The Yankees threw a lefty in the middle match in the Bronx. And now, the Dodgers are 18-20.

That lefty was CC Sabathia, who, outside of serving up far too many taters, had really been quite good over the past month and a half. Sabathia carried a 4.70 ERA over his previous nine starts, but that came with a 54-to-18 K:BB ratio in 53 2/3 innings. The problem was the 13 homers that accompanied his otherwise good work.

On Tuesday, Sabathia didn’t allow a homer. What he did do, was strike out seven and walk only one in 6 1/3 innings while picking up 10 more outs on the ground.

The only trouble for Sabathia was that the Yankees’ starting nine proved no more effective against Julio Urias and company than the Dodgers had against him. Then, Aaron Judge left the game with an oblique injury, and Jacoby Ellsbury did his best Judge impression by crushing a loopy Ross Stripling breaking ball into the second deck:

Up next was pinch-hitter Didi Gregorius, and he launched one, too,

making Ellsbury and Gregorius the first Yankees to come off the bench and go back-to-back since 1957.

Gary Sanchez slugged his 14th bomb of the year in the eighth inning, and that was all she wrote. Yankees 3, Dodgers 0.

The Mariners took the field on Tuesday with the longest active winning streak in the majors at six games. Nelson Cruz wasted no time in putting Seattle well on its way to making it seven:

That moonshot gave the road team a 2-0 lead, and that was all they’d need.

Taijuan Walker, equipped with a new set of mechanics, was nearly perfect. In fact, for 5 2/3 innings, he was perfect. His only blemish in the sixth was a throwing error by his shortstop, Ketel Marte. He lost his no-hitter to Kole Calhoun, leading off the top of the seventh.

But while this outing won’t be etched into the history books, if it’s a sign that the right-hander is growing comfortable with a refined delivery, the Mariners will gladly take it. Walker went the distance, holding the Halos to three singles while striking out 11 without issuing a free pass.

The 24-year-old worked off of a mid-90s fastball, largely up in the zone, complemented with a curveball and splitter that both flashed hard bite down low. The split was particularly vicious, picking up 19 strikes—all swinging—in 26 deliveries, with 10 of the 19 cuts missing all together.

Nori Aoki and Seth Smith went yard in support of Walker, the latter clubbing a grand slam, and the Mariners romped, 8-0, to extend their league-best streak.

This 5-6-4 force at second went just how the Marlins drew it up:

As the Blue Jays look to maintain their hold on an American League wild-card berth, they’d be thrilled to see Marco Estrada—a key cog in their rotation during the first four months of the season—return to his pre-August form. Since August 9th, a span of four starts, Estrada’s been torched for 39 hits, seven of them homers, in 28 1/3 innings, yielding a bloated 6.99 ERA and .943 opponents’ OPS over that stretch. Jeff Zimmerman of Fangraphs pointed to a possible culprit behind the right-hander’s rut, noting that the spin rate on his fastball has plunged during the past five-plus weeks. Beyond making the hard stuff more hittable, or as hittable as your standard 89-mph offering, a dip in spin rate could indicate the onset of an arm injury, though the only known health concern with Estrada was lower-back pain earlier this summer.

Aside from the worrisome spin-rate data, Estrada has also shown a change in pitch selection, 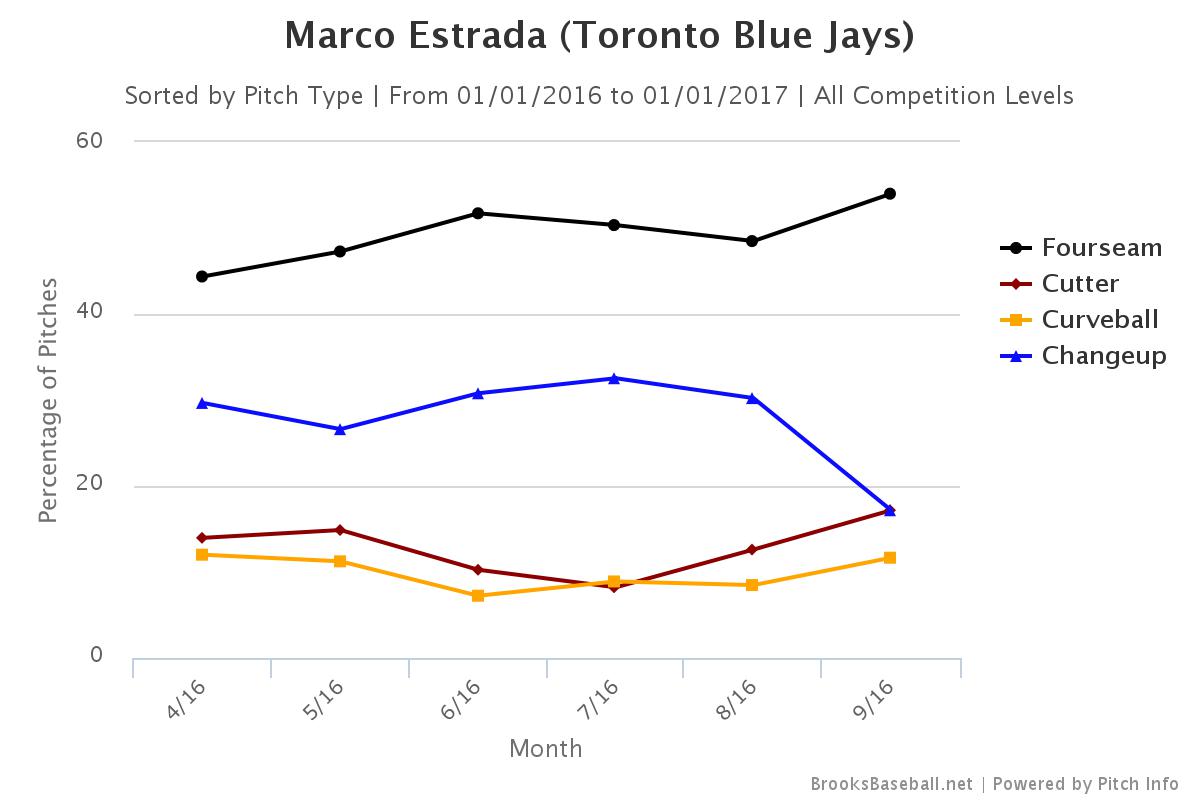 trading many of his changeups for four-seamers and cutters. He’s thrown the cambio about 17 percent of the time in two starts this month, down from 30 percent in August, and his cutter (17 percent) and fastball (54 percent) usage rates are both at monthly highs for the season. The trouble with that shift is that batters have been tattooing both the four-seamer and cutter since Estrada’s ongoing woes began in early August. They’re hitting .364 against the former and are 7-for-11 (.636) with a double and two homers in 11 at-bats culminating with the latter.

Estrada will be the first pitcher to toe the rubber in the majors this afternoon, with the Jays hosting Alex Cobb and the Rays in a series-closing matinee at Rogers Centre. Keep an eye on his pitch selection and the sort of contact batters generate against his fastball for clues on whether the 33-year-old is moving toward a return to form (12:37 p.m. ET).

You need to be logged in to comment. Login or Subscribe
mshopoff
Why has Rob Manfred done nothing regarding the blatant conflict of interest around the Rangers owning the Astros?
Reply to mshopoff