The Wednesday Takeaway
A’s prospect Jharel Cotton made his big-league debut yesterday afternoon against the Angels, and, naturally, the rookie experienced some nerves before making the start. In fact, the nerves were noticeable enough that his teammates—namely, Stephen Vogt—were concerned about the situation before the game even started.

Jharel Cotton had some nerves during his bullpen session before the game and wasn't throwing well. Vogt confirms. "It was not good."

However, the best way to get over jitters is to get off to a good start. Indeed, Cotton retired the first two batters he faced with just five pitches, and then managed to win a seven-pitch duel with C.J. Cron to get out of the inning without giving up a hit. As a matter of fact, Cotton ended up making it through the first three innings of his first career start without giving up a hit.

Andrelton Simmons put an end to any premature thoughts of a debut no-hitter by stroking a liner up the middle for a single leading off the fourth inning However, this didn’t faze Cotton—he continued to casually make his way through the Angels’ lineup, and by the time he made it to the seventh inning, the hit that Andrelton Simmons had in the fourth inning still stood lonely on the scoreboard.

That changed immediately in the seventh inning. C.J. Cron had popped out in his first two at-bats but finally got the best of Cotton, hitting the ninth pitch of this at-bat over the fence in center field for a solo homer.

Cotton’s 102nd pitch of the day ended with Jefry Marte hitting a pop fly into foul territory for the first out of the seventh inning, and that would end up being the rookie's last pitch of the day. His final line: 6.1 innings pitched with three strikeouts, two walks, two hits allowed, and only one earned run allowed. 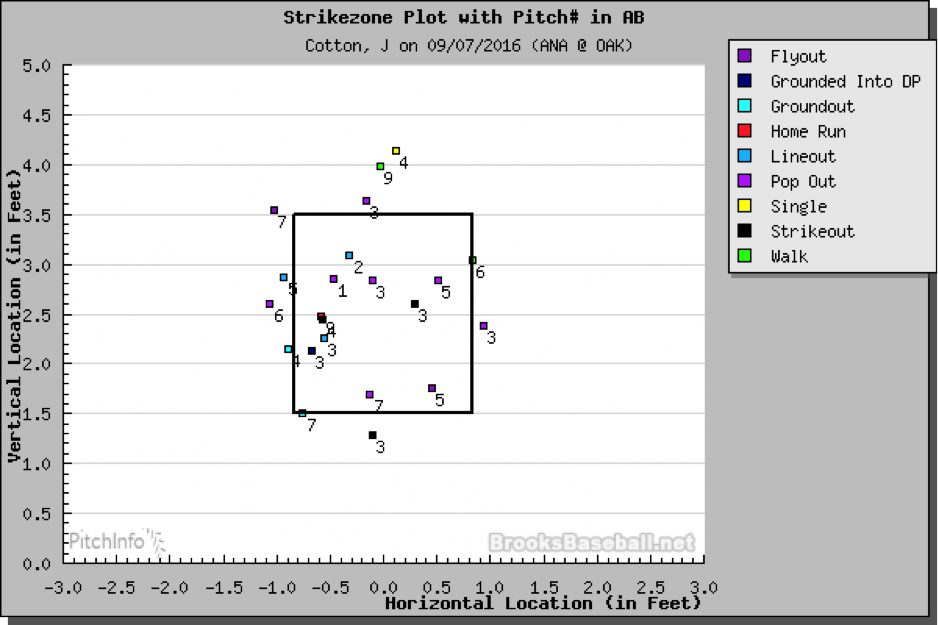 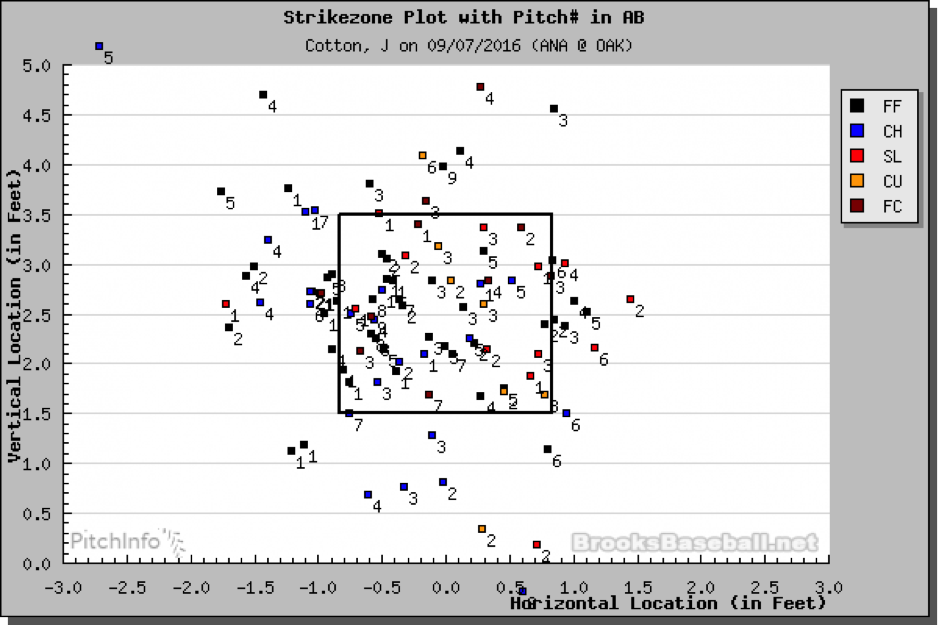 Oakland eventually won the game 4-1, and Cotton's debut turned out to be, by franchise standards, historical:

.@JharelCotton is the first #Athletics pitcher with more than 6.0 ip and 2 hits or fewer in his ML debut since Porter Vaughan on 6/16/40

If you’re an Oakland Athletic and you’re being mentioned in the same breath as a Philadelphia Athletic, then you’ve done something really good. That’s the case for Jharel Cotton, who ended up having a lovely major league debut—and will undoubtedly be less nervous before his next start.

Quick Hits
For most of this summer, the AL East’s brutal cage match of a pennant race has been a triple threat match. All of a sudden, the New York Yankees have made a run-in with a steel chair and we could end up having a four-way dance on our hands. The Baby Bombers continued their post-deadline surge by completing a three-game sweep of the Toronto Blue Jays. Starlin Castro’s dinger off of Marcus Stroman was the deciding factor in the 2-0 win.

The Yankees are now four games behind in the AL East, and they’re only two-and-half games back in the Wild Card. Which is all amazing when you consider that it was widely assumed that they punted on this season at the deadline. So much for that theory!

The Yankees opened the day within 4 1/2 games of first place in the AL East. Last time they were that close? April 28.

Meanwhile, the team on the orange side of New York is making a surge of its own. The Mets picked up a 6-3 victory over the Reds on Wednesday afternoon, and now sit in a tie with the Cardinals for the second Wild Card spot in the National League. They did this with Noah Syndergaard managing to get through five scoreless innings while clearly not being at his best. 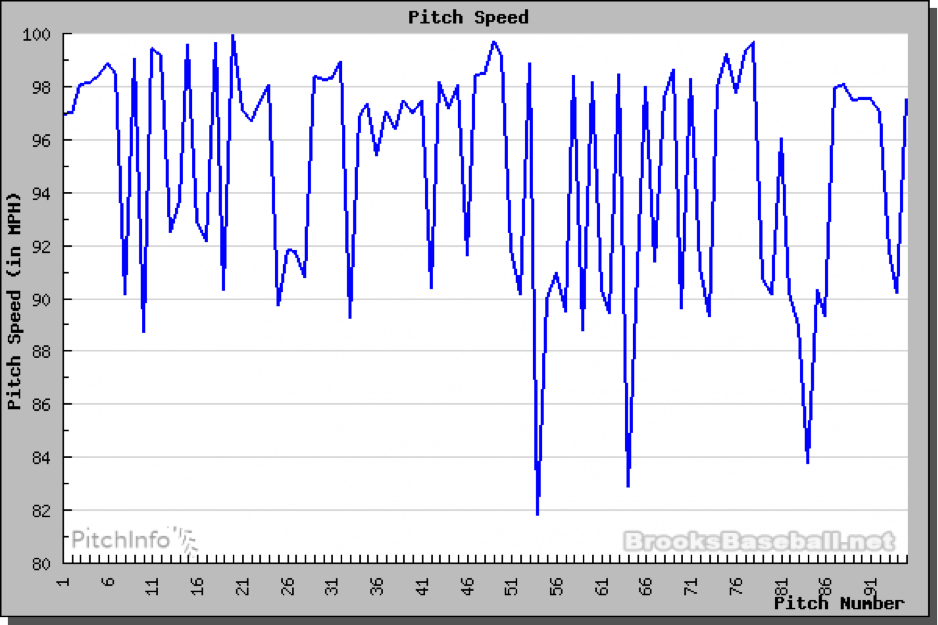 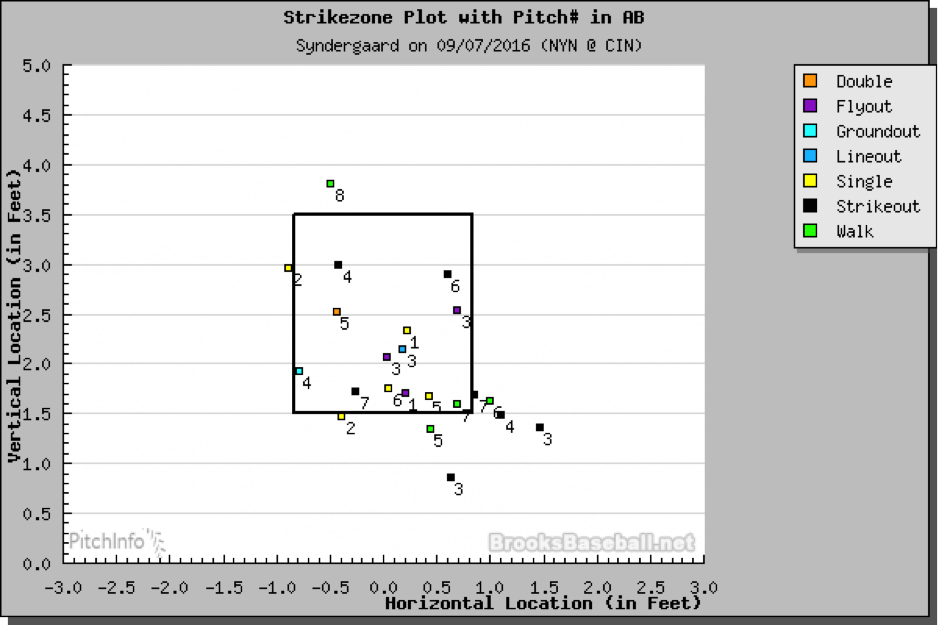 Syndergaard did get a couple of runs of support from his friends with the bats, so he left the game with the Mets up 2-0. Curtis Granderson added to that lead with a solo homer in the sixth inning, and Wilmer Flores broke the game open with a pinch-hit dinger of the two-run variety that basically put the game out of reach.

The Mets were able to move into a tie with the Cardinals thanks to Pittsburgh. The Pirates have been on a big-time skid as of late (as Emma pointed out yesterday) and it’s cost them—they went into Wednesday with a meager 1.5 percent chance of making the postseason—but they’ve still got a much better chance of throwing a monkey wrench into another team’s playoff hopes. Jung-ho Kang has been doing his level best to make sure this happens. He hit two homers for the Bucs on Tuesday, and he added another on Wednesday night—and this one ended up being the decisive blow in finally ending Pittsburgh’s tough run of form.

Anthony Rizzo and the Cubs came very close to extending the game against the Brewers to at least the bottom of the ninth inning. Instead, Keon Broxton literally snatched that chance away with an amazing jumping catch at the fence. The Brewers won the game as a result of this catch, and hordes of Cubs fans at Miller Park probably left the stadium in disbelief after witnessing it.

What to Watch on Thursday
At this time last week, there were only four games on the schedule for the day so your choices were very limited. Today, there are seven games to choose from, and the matinee game should actually be a pretty good one. The Astros went into Wednesday’s action with a 25.2 percent chance of making the playoffs, so they’ve still got plenty to play for in this final stretch of the season. They also have a chance at taking three out of four games against the AL Central-leading Cleveland Indians. Cleveland will be sending Trevor Bauer to the mound, while David Paulino will be making his major-league debut for the Astros. Maybe he’ll be looking at Jharel Cotton’s debut for inspiration?

Speaking of rookie pitchers, Jeff Hoffman will be making his fourth career start on Thursday as the Rockies take on the Padres in San Diego. Colorado’s prized pitching prospect has gotten progressively better over each of his three starts, though the fact that he only has five strikeouts through those three starts is a little bit concerning. Still, the Rockies are hoping to see further flashes of potential, and Hoffman has a prime opportunity to show some of that potential against a Padres team that is currently sitting on a .254 TAv as a unit, which is tied for 29th in all of baseball.

You need to be logged in to comment. Login or Subscribe
onegameref
I thought a good title for the A's pitcher section would have been a homage to a fine 70's classic, "Cotton Comes to Oakland."
Reply to onegameref