The Tuesday Takeaway
The last week and a half has seen the Pirates slip from the heart of the Wild Card race to its outermost edges, dragged down by a struggling pitching staff and the seven-game losing streak that has followed in turn. The first inning of Tuesday’s match-up against the Cardinals offered nothing to counter this trend:

A Yadier Molina grand slam, putting Pittsburgh in a 4-0 hole before they’d even had a chance at the plate. A Matt Adams solo shot in the third did not help matters. But the Pirates then began pushing back—cutting their deficit from five to four and then, in the fifth inning, to nothing at all, taking a one-run lead on a Jordy Mercer double.

A few innings later, the Pirates stood just one out away from finalizing that 6-5 score, one out away from ending their drought and chipping away a bit at the Cardinals’ Wild Card lead in the process. Closer Tony Watson had gotten two quick outs to start the ninth, and a pinch-hitting Matt Carpenter was now all that stood between him and the Pittsburgh victory. And on an 0-2 count…

Pirates lead gone. But the game was still tied, still just one out to go to give Pittsburgh a chance to reclaim the game—and then a Yadier Molina double was followed by a first pitch right down the middle to Randal Grichuk.

And right after that, a similar pitch to Jhonny Peralta that received similar treatment (albeit to right field instead of left, variety being the spice of blown saves):

Quick Hits
Brian Dozier is kind of insane right now, as Daniel Rathman detailed here yesterday and Aaron Gleeman did two weeks ago. He added a little more to his catalogue of late summer slugging with a lead-off home run to open Tuesday’s game against Kansas City—making five straight games with dingers for him, part of a power streak that includes 20 home runs since August 1 with an .805 slugging percentage in that time. Not enough for a Twins victory, as the Royals came away with a 10-3 win, but enough to put Dozier’s season home run total at 39.

After trailing for much of the night in a close game against the Blue Jays, the Yankees managed to pull ahead with a four-run eighth inning. Even with the heart of Toronto’s order due up, taking a 7-4 lead into the ninth with Dellin Betances on the mound would seem a fairly safe way to secure a victory—but Betances, pitching for the third straight day, had other plans. 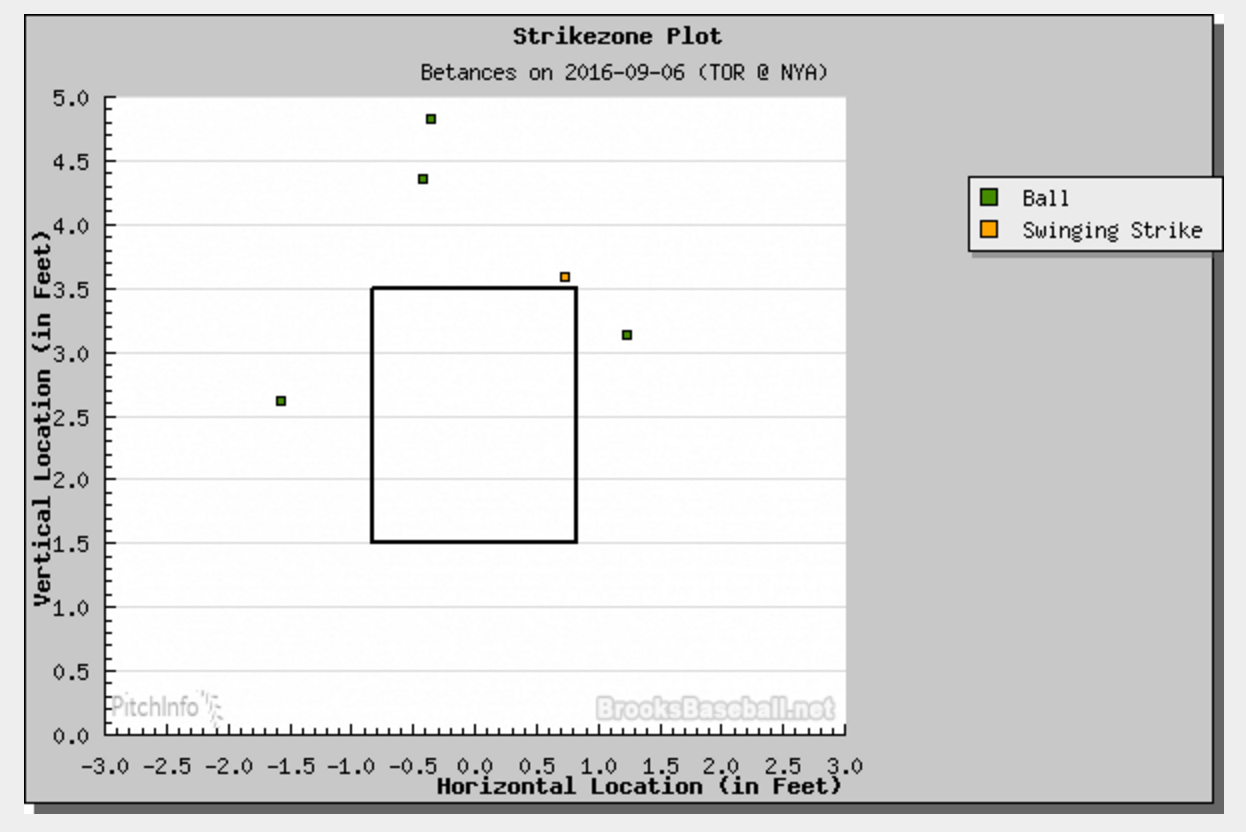 The struggle with his command continued as Edwin Encarnacion came to the plate with two on and none out, which is really not too great of a setting to struggle with your command. This battle resulted in a wild pitch that moved the runners over—and then an Encarnacion single that drove in a run.

With the Yankees still up by two, Betances was given space to salvage the situation. For one plate appearance, it looked as if he had, with Russell Martin called out looking—but then came yet another walk, and then a single to drive in another run, and then Betances’ night was over with two men left in scoring position. But Blake Parker, his replacement, got out of the jam with an assist from a leaping Brett Gardner, and the Yankees came away with the 7-6 victory.

After being sidelined for more than three weeks with a groin injury, Giancarlo Stanton made his return on Tuesday. Activated just a few hours before game time and only for use as a pinch-hitter, Stanton singled in his one plate appearance—but the Marlins went on to fall to the Phillies 4-3, dropping their fifth straight.

Dansby Swanson’s first career home run came in dramatic, inside-the-park fashion. Though it put the Braves up 3-0 over the Nationals, Atlanta couldn’t hold their lead in a back-and-forth game and ultimately fell 9-7.

Defensive Play of the Day
Yoenis Cespedes suggests you don’t try to run on him, as part of a 4-3 Mets win that put them just one game back of the Wild Card.

What to Watch on Wednesday
In June, Buck Showalter said Dylan Bundy’s innings limit this year would be “60 to 75”; last week, Bundy crossed the 90-inning threshold. In crossing that threshold, however, Bundy had his best start in a month, throwing nearly six scoreless innings with five strikeouts. After struggling through much of August, Bundy last week offered some of the flashes of success he showed earlier this summer. He takes the mound against Drew Smyly and the Rays at 1:10 EST as the Orioles try to retain their grip on the second Wild Card spot.

After spending a little more than two weeks on the disabled list with elbow soreness, Stephen Strasburg will make his return Wednesday. Going against the Braves at 7:05 EST, he’ll look to break from the ugly trends he displayed in his last few starts before exiting with the injury—11.2 innings over three games, with 19 runs and 24 hits.