The Wednesday Takeaway
The Houston Astros are still in with a fighting chance of returning to the postseason, but they'll have to muscle free of an extremely crowded race for the final Wild Card spot. Part of that includes beating up on the teams that have long since lost their playoff hopes, like the Oakland A’s. Those poor Athletics had themselves a doozy of an eighth inning:

The Astros should pay a playoff share to the A's if they make it to October. Quite the 8th inning for Oakland.

Before the awful eighth inning for the A’s, Oakland was in complete control of this game. It had a 3-1 lead going into the eighth, and that was largely due to the efforts of Ross Detwiler on the mound. Detwiler lasted seven innings and had the Astros completely befuddled. 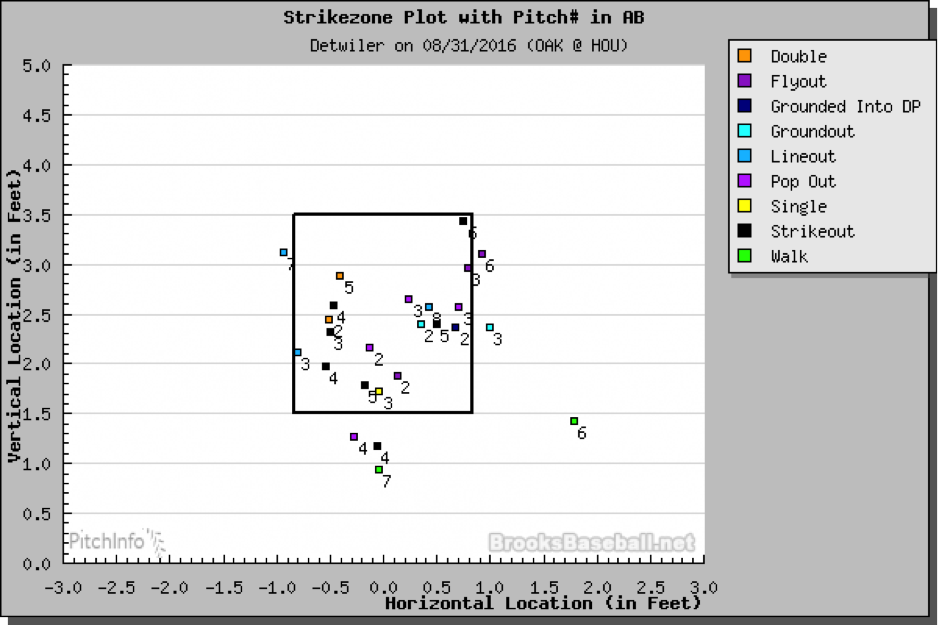 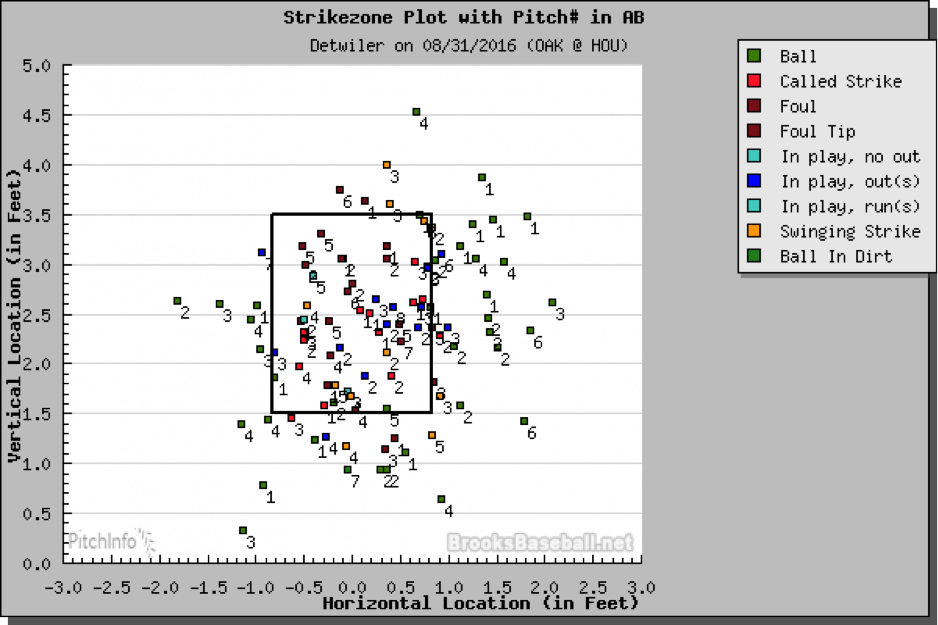 It was all good for Oakland for most of this game, and it even seemed like the soon-to-be disastrous eighth inning was going to be a smooth one for Liam Hendriks and the A’s. That was before George Springer hit a two-out triple that landed near the base of Tal’s Hill in center field.

This was still manageable for the A's, who just needed one out to escape the inning unscathed. Hendriks got Alex Bregman to strike out. However, the third strike went through Bruce Maxwell III’s legs and to the backstop. Springer scored from third, and the Astros were back in business.

Even after gifting a run and an extra out, the A’s were still close to escaping with the lead. But escape is hard when Jose Altuve is up, and Altuve hit an opposite-field gapper for a triple. Bregman scored, and Oakland’s lead had completely evaporated after the painful sequence of a triple, a wild pitch, and another triple.

After the A’s put Carlos Correa on first with an intentional walk, it was time for Evan Gattis to see if he could exacerbate Oakland’s pain. Gattis wasted no time and looped the first pitch he saw into left field. Altuve scored, and the A’s had successfully snatched defeat from the jaws of victory.

Sometimes in sports, it comes down to good teams biding their time until the bad team does something to live up to its billing of being a bad team. For the Astros, they just needed to wade in the water until the Athletics decided to flail about in the same water.

Quick Hits
Speaking of good teams taking advantage of bad teams faltering late in the game, the Dodgers did just that against the Rockies at Coors Field. They went into the top of the ninth inning trailing Colorado by three runs. They exited the ninth inning with a two-run lead, and it included a go-ahead grand slam from the legendary Andrew Toles off of Adam Ottavino.

Andrew Toles, who was out of organized baseball for nearly 6 months last season, puts Dodgers ahead with 9th-inning grand slam. Incredible.

On Tuesday, the Rangers improved to an almost unfeasible record of 30-8 in one-run games. Their game against the Mariners on Wednesday was much less dramatic, as they ended up walloping Seattle by 13 runs. The man who blew the game open for Texas was Carlos Gomez, of all people. The former Astro now has seven dingers this season, with two of them coming since joining the Rangers on August 25th.

Meanwhile, this ended up being Felix Hernandez’s worst start since an ill-fated start against the A’s back in May. This was the fifth time in 18 starts this season that Hernandez walked four or more batters. To put that in comparison, he only had four games like that over 31 starts last season. Needless to say, this is looking like it’s going to end up being a forgettable year for King Felix. 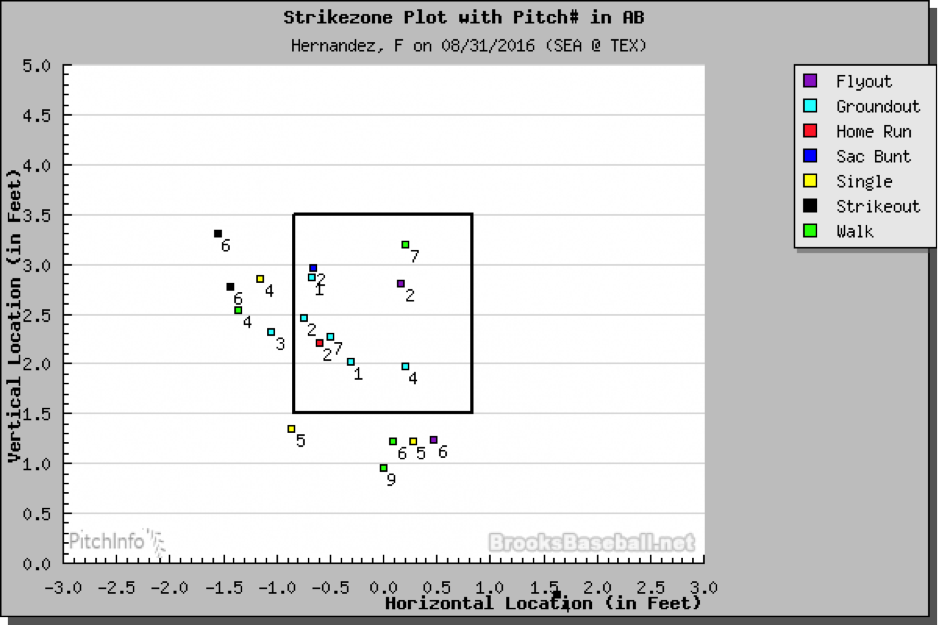 On the flipside of things as far as pitching is concerned, Justin Verlander has been reaching back to his prime with his past few performances. The Tigers pulled out a 3-2 victory over the White Sox, and a big factor in the win was the fact that Verlander went seven innings, struck out nine, and gave up only three hits. Granted, two of those hits ended up being solo home runs for the White Sox, but that didn’t diminish from what was a great performance for Verlander. 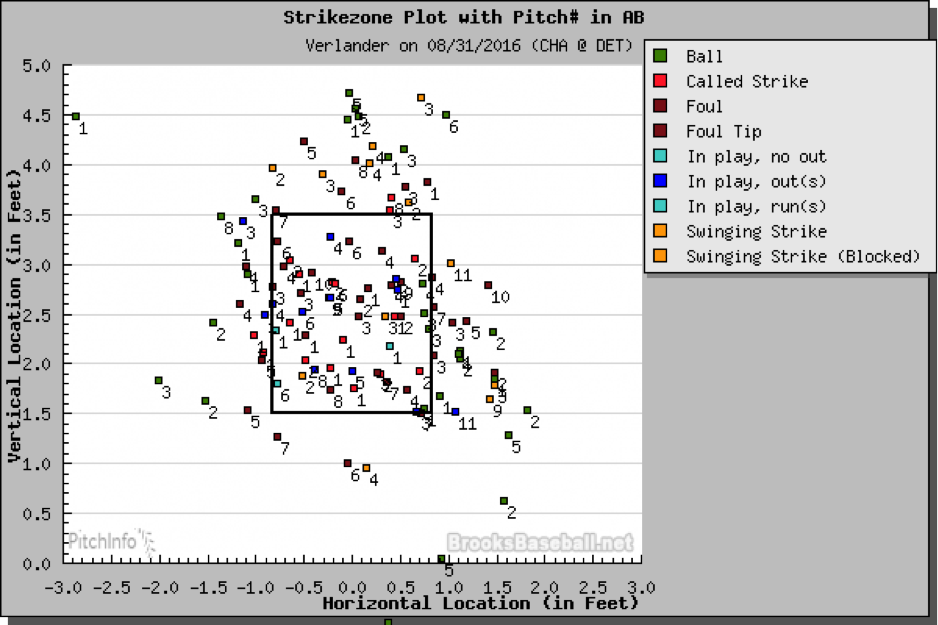 The veteran has played a major role in Detroit’s post All-Star break resurgence, and if they make it into October, his performances will be part of the reason why they were able to get into the tournament.

The Cardinals lost to the Brewers on Wednesday night, and this home run by Yadier Molina was the only highlight for St. Louis on the evening.

Despite the generally uninspiring defeat, that dinger ended up being a historic one for the Cardinals franchise. This marks 20 straight games in which the Cardinals have homered, and that’s officially the new franchise record. When you consider the fact that this club has been around since the 1880s and also used to employ Mark McGwire and Albert Pujols in their respective primes, then you can appreciate just how impressive this feat is for this current St. Louis team.

Defensive Play of the Day
The Yankees and Royals have played 23 innings of baseball against each other, with Tuesday night/Wednesday morning’s game going 10 innings, and last night/this morning’s game going 13 innings. Dellin Betances capped off all of that extra baseball with one of the most absurd defensive plays that you’ll ever see a 6-foot-8 pitcher make. It looks like something you’d see on an And1 basketball mixtape instead of something you’d see on a Major League Baseball diamond.

Dellin Betances with the through-the-legs reverse snag to initiate a crucial double-play in the 13th. #YANKSonYES pic.twitter.com/hm8d0NOHC4

What to Watch on Thursday
There are only four games on the schedule today. If you dare, the Braves and Padres are going to play each other in the matinee game of the day. However, if you’re willing to wait until the evening, then you’ll have a couple of interesting games to keep an eye on. The Mets are still in the NL Wild Card race, and they’ll be sending Jacob deGrom out to the mound to take on the Marlins as they try to keep their postseason hopes alive in the final month of the season.

However, the main event will be happening in Chicago, as the Cubs will be taking on the Giants in what could be a postseason preview. The Cubs are currently sitting on a magic number of 16, so they’re basically playing out the string until October comes. Meanwhile, the Giants have sputtered since the All-Star break, and they find themselves in an intense pennant chase with the Dodgers as a result. Now, San Francisco will be entering a tough series with the Cubs and this could be a series that they end up looking back on as a watershed moment— whether they enter the playoffs as the NL West champions or are forced to put their season on the line in the Wild Card game.

You need to be logged in to comment. Login or Subscribe
tomshipley75
That play by Betances was crazy, but think it should at least share play-of-the-day with Addy Russell's sliding, two-out with the bases loaded, catch.
Reply to tomshipley75
jkaflagg
The Altuve triple was well struck, but a horrible route by Danny Valencia playing right field (!?!) helped....when things are going bad as they are for the A's, the ball will find the infielder you're trying to hide in the outfield to keep his bat in the lineup....

On the other hand....when things are going well, Carlos Gomez will hit a grand slam off Felix Hernandez, even though he's hitting just as poorly in Texas as he did in Houston....
Reply to jkaflagg