Saturday, September 3rd will mark one year since Dodgers rookie shortstop Corey Seager’s major-league debut. Since then, Seager has been the talk of Los Angeles baseball fans for reasons that continue to mount. The preseason favorite for Rookie of the Year has become the presumptive ROY, and he hasn't stopped there: The 22-year old is threatening to do something only two other players have in history have done: He just might win the National League MVP award.

The idea isn’t so crazy. While he might lack a lot of late-game moments of the sort that stick in voters' minds, he added one when he broke up Matt Moore's no-hitter with two outs in the ninth. Meanwhile, Seager is shattering Dodgers records left and right thanks to his prodigious and precocious power.

Seager’s power is remarkable. His isolated power is the best ever for a Dodger 22 or younger, and the third best ever for a shortstop that young. (Both seasons that topped his belonged to Alex Rodriguez.)

But in April of 2016, while his fellow rookie shortstops Aledmys Diaz and Trevor Story were muscling out batting averages over .400 and hitting 10 home runs, respectively, Seager hit just two home runs with a line that read just .250/.311/.396. His ISO was just .146. The questions flew. But in May, Seager suddenly posted a slugging percentage of .540 and hasn’t let the number dip anywhere near .500 since; he's hitting .349./.411/.587 since June 1. When Diaz and Story fell off the board to injuries, Seager took the board over.

So what’s been the key for Seager? Part of it is something the rookies often struggle with. Seager is able to hit breaking pitches, and not just hit them, but hit them with authority. Of Seager’s 23 home runs on the season, 11 of them have come on sliders and curveballs. Check out Seager’s slugging maps on these two pitches: 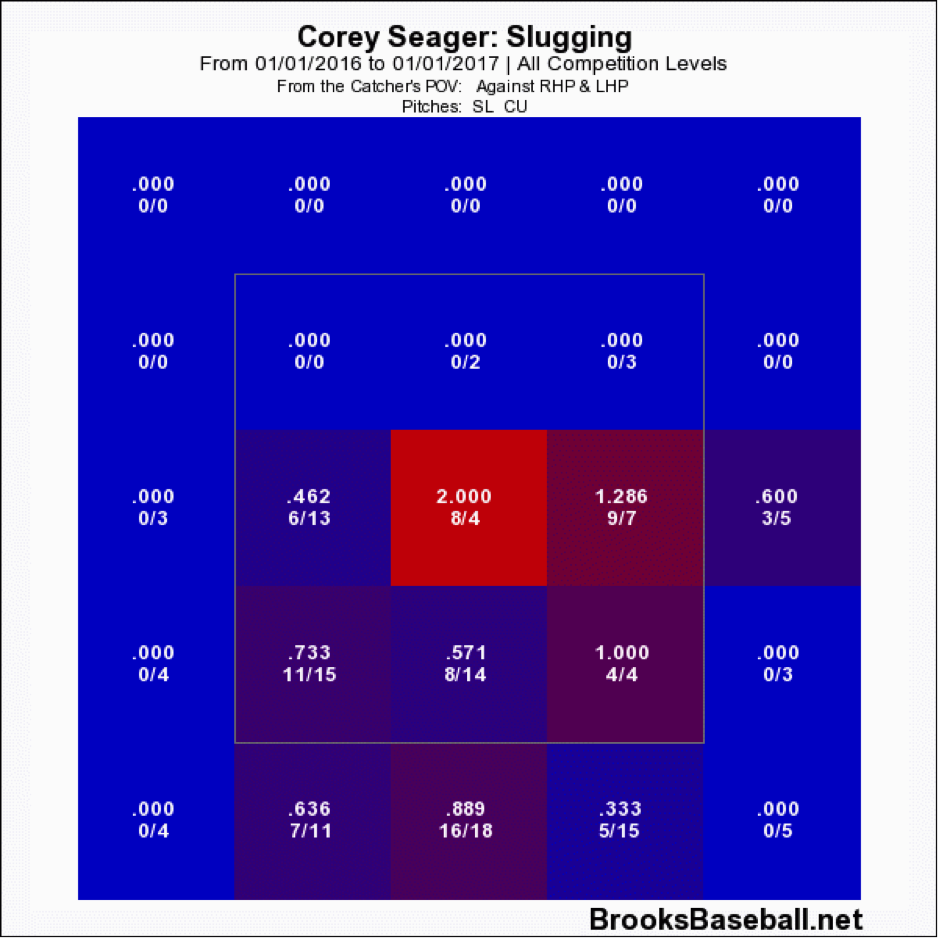 Check out how well he’s hitting for power on the these pitches when they’re not just right down the middle, but low in the zone and even nearly in the dirt — areas that most hitters and especially rookie hitters are prone to whiff.

Of course, Seager does still struggle with these pitches, whiffing on sliders nearly 20 percent of the time and on curveballs 17 percent of the time, but he’s not rolling over on the pitches nearly as much. Seager is hitting groundballs at just around 6 percent on each pitch. Not only does Seager make contact on these pesky breaking pitches, he hits them with authority and he elevates them.

Seager has also quickly picked up an ability to cover the entire plate. That’s a valuable skill that takes most hitters much longer than four months in the big leagues to get down to a science. Take a look at Seager’s slugging map on the left from April 2016, and on the right from May until presently: 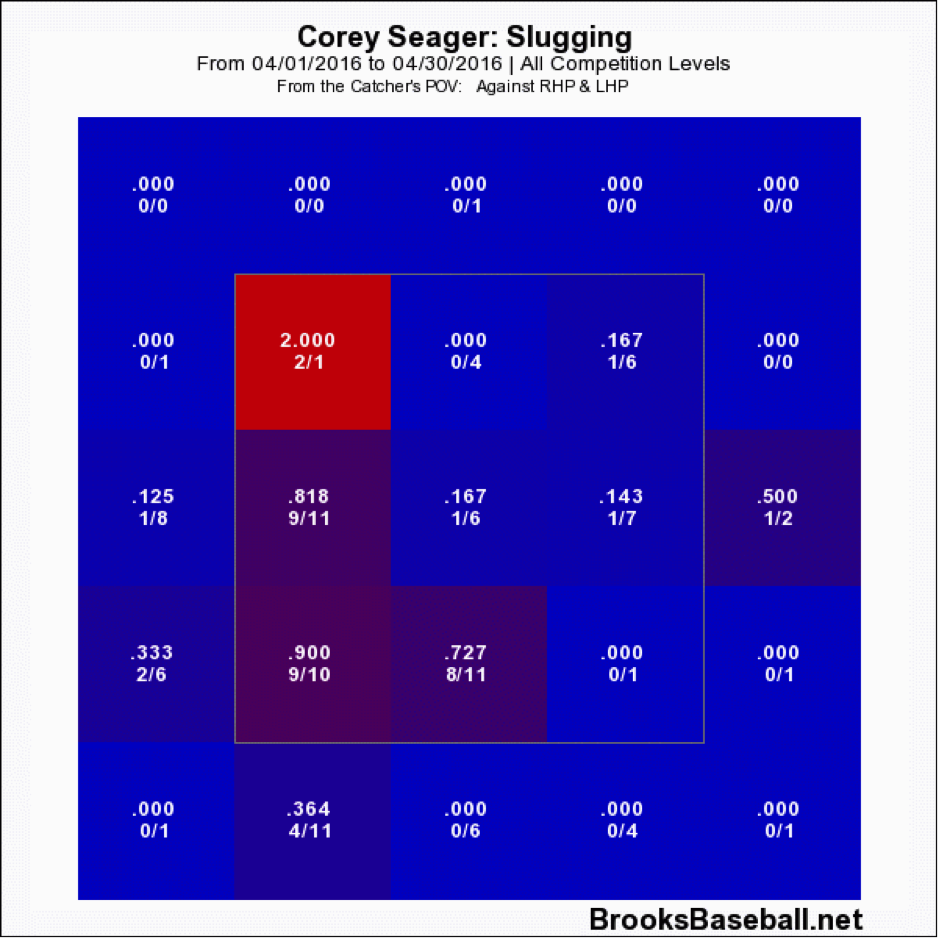 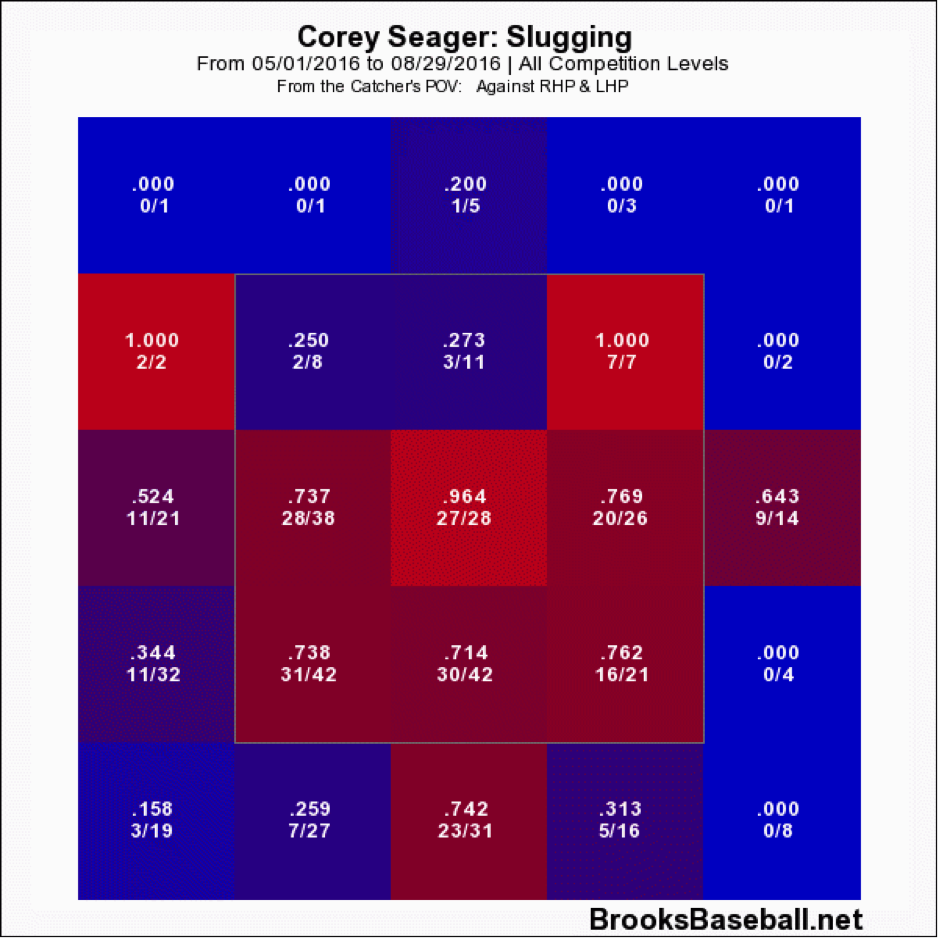 In April, Seager was only covering the outside portion of the plate with his power. Now he’s not only covering the whole plate, but he’s hitting for power off the plate, in on his hands and low and outside the zone. So, virtually everywhere, except for high in the zone—those pesky high fastballs still elude Seager’s grasp. But when you’re hitting nearly every other quadrant of the zone, I’d say it’s fine to struggle with the high fastball, something he can learn to adjust to at a later time.

Seager’s key to success and tapping into his power hasn’t so much been plate approach, as his power strikeout and walk rates have fluctuated from month to month, ranging from a 14.2 percent strikeout rate in April to a nearly 22 percent rate in July. Seager’s walk rate has stayed around league average, inching as far up as 9.1 percent in August and as low as 5.9 percent in July, indicating that much of this improvement is likely due to Seager’s eye at the plate, and his ability to determine which pitches he’s able to hit with authority.

With the Dodgers in the heat of a pennant race, Seager’s strong rookie campaign could potentially have a large impact on the Dodgers run at October. If Seager does in fact help rally the Dodgers deep into the postseason, coupled with the historical records being set and potentially one of the best rookie shortstop campaigns that game has seen in sometime, it’s not too crazy to think that perhaps Seager could become the third player in history to merit the Rookie of the Year and MVP awards, adding to his list of accolades in 2016.

The campaign that Kris Bryant, currently the MVP favorite, is putting together on the North side isn’t to be discounted, nor is his impact on the Cubs' incredible season. Voters often ask for more, though, and they're not always obvious in what they'll like in a given year. If the Dodgers surge through September on the momentum of a run that’s influenced by Seager—isn’t that so often deemed to be the true meaning of the MVP award? If so, the race for this award could come down to Vin Scully's final call.

You need to be logged in to comment. Login or Subscribe
dwhitesell
You state: If Seager does in fact help rally the Dodgers deep into the postseason ... itâ€™s not too crazy to think that perhaps Seager could become the third player in history to merit the Rookie of the Year and MVP awards, adding to his list of accolades in 2016.

Those awards are determined before the playoffs start. So what Seager might do in the postseason is irrelevant to what awards he might garner.
Reply to dwhitesell