The Hubert H. Humphrey Metrodome was a good place to watch a baseball game.

Okay, that might not be “objectively” true, strictly speaking, but having grown up in Minnesota, I had a lot of affection for the Dome. It probably helped that it was the only major-league stadium (and that’s what it was: a stadium, not a ballpark) I’d ever been to, a fact that would remain true until I was 22 years old. Still, its lack of frills did an excellent job of keeping your focus on the game; sight lines were terrific from literally everywhere I ever sat, which was just about everywhere at one point or another; it got incredibly loud (read: incredibly fun) when the team was doing well, though that wasn’t often enough in my prime baseball-game-attending days (the late 90s). It also had its own special touches, as all stadiums/parks do. I was instantly nostalgic about it when Target Field opened in 2010, even while acknowledging Target Field was actually a better place to watch a game (I swear, I’m getting to the point soon).

The Twins carried a few of their Metrodome gimmicks with them to the new park. One in particular was a classic amongst fans, so much so that the (now-defunct) Minnesota Sports-themed apparel company DiamondCentric made a t-shirt out of it: a ghost-like face with a speech bubble saying “WALKS WILL HAUNT!” The Twins might not have been the only team with this sort of graphic, but it fit so well with the ideals the team showed (primarily on the pitching side, but also during the small-ball offensive era of the mid 2000s) that it really stuck with the fans. 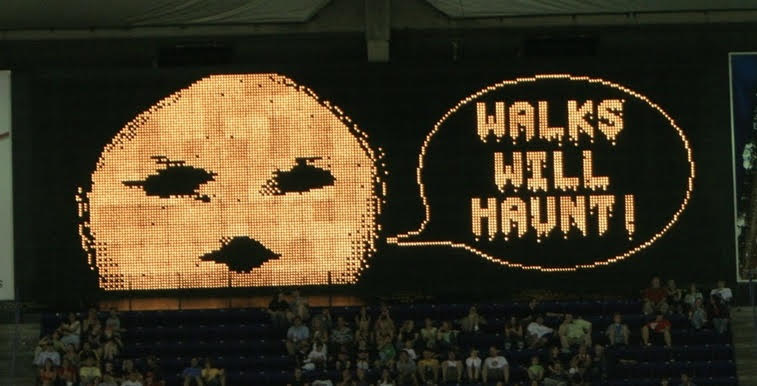 I couldn’t help but think about that when I saw a conversation on Twitter between Matt Goldman and Steve Martano in which they talk about how often intentional walks backfire—that is, how often a run scores after a batter gets walked to load the bases. Having gotten their permission (since it was their idea first), I’m going to look into that here today.

Before I start, I’ll note that (as is so often the case) I’m not the first person to look at this topic; in fact, I’m following up on the work of writers who I greatly admire, which is more than a little intimidating. Grant Brisbee in 2013 started the either Herculean or Sisyphean task, depending on your perspective, of examining every intentional walk to load the bases in 2013 via the box score. He was more interested in the peculiarities of each situation than anything else, though he did conclude “Walk the bases loaded to get to the pitcher. Other than that, c'mon.” He also created an acronym almost-initialism that I’ll be using throughout here, IBBTLTB. Dave Cameron wrote about what happens after an IBB, also in 2013, and although he didn’t focus on IBBTLTBs, which may change the conclusions, he did find that it’s not an absurd strategy (and might even be the right one). Matt Snyder of CBS wrote about it in an article, now only available through the Wayback Machine or Google Cache, after one in particular backfired for the Mariners (again in 2013—there was something about that year I guess), through the lens of run expectancy charts.

There are a bunch of layers to this problem, but let’s start at the very top: In general, and ignoring any possible context, runs will score more often than not after an IBBTLTB. Since 1974, which is the first year for which Retrosheet has complete play-by-play data, there have been 20,559 IBBTLTBs. In 54.06 percent of instances, a run scored after the walk; the average number of runs scored (by the three players subsequently on base) was 1.21.

Compare this to what happens after not issuing an intentional walk in a two-baserunner situation:

That doesn’t tell the whole story, though. The very first bit of context I want to apply is the number of outs when the walk occurs. Unsurprisingly (to me anyway), the majority of IBBTLTBs occur with one out (to set up either a force play at home or a double play). In these situations, though, the frequency of run scoring actually rises; runs score 66.37 percent of the time, and the average number of runs is 1.50. Run scoring is also more frequent when there’s an IBBTLTB with no outs—the rate jumps all the way to 83.10 percent and 1.80 runs/instance. Of course, there’s a drop when looking at two-out situations, but even then this isn’t evidence it’s a worthwhile strategy (without more context).

There’s not a lot of meaning in cross-year run expectancy charts, so it’s hard to compare these multi-year average numbers I’m listing with expected scoring for a specific year, but using just 2016 as an example, in every case but one the team issuing the walk is worse off than before the walk by both overall RE and expectation of scoring at least one run. I’ll show the two-out situations as an example (within the example, I suppose).

It’s also potentially interesting to look at how scoring is affected by which lineup spot was walked. Looking at each lineup spot individually and split by the number of outs, in only one out of 27 situations did the frequency of scoring a run decrease, and that was (maybe you can guess?) when the eight batter gets IBBTLTB’d with two outs. The frequency of scoring drops all the way from 22.52 percent of the time when the batter isn’t walked to 22.28 percent of the time when he intentionally is. Also unsurprising is that the middle of the lineup is the group most often issued an IBBTLTB, except with two outs, in which case the top spot belongs to the eight batter.

Although I think it’d be interesting to further break that chart out by starting base state, at that point I’d need to include 81 rows, and the sample sizes for certain configurations would be so small as to be meaningless. I don’t even feel that confident saying the quarter-percentage-point drop seen with two outs for the eighth batter is meaningful.

This has turned into a bit of a data dump at this point, so the time feels right to return to my original question: How often does an IBBTLTB backfire? The answer appears to be “most of the time." In nearly all situations at least one run is more likely to score, and in general more runs are likely to score, after an intentional walk as compared to letting the batter hit. This is an intuitive result that anyone can see just by looking at the appropriate run expectancy and one-run expectancy tables here at BP, but hopefully you agree it was still worth examining in greater detail.

I’ll close on a mildly uplifting note: the instance of IBBTLTBs have been dropping fairly steadily (from a long-term view) across the entire data set I was working with, and last year, for the first time since 1975, the frequency of scoring after an IBBTLTB dropped below 50 percent, so maybe in another hundred years no one will worry about this at all.

You need to be logged in to comment. Login or Subscribe
Chiefsnark
We went to the Dome during a SABR convention in 1988 and yes, it seemed charmless and plastic...someone once said the worst thing he could imagine in baseball was a night game in a dome, using the designated hitter rule, on artificial turf, with wild car implications.

But my friend remarked that although she was used to Fenway Park and I was a Tiger Stadium habitue, the kids we saw coming into the Dome would decades from then be telling their own kids about how Grandpa took them to the Twins game and what they saw Kirby Puckett do.
Reply to Chiefsnark
JohnChoiniere
There seems to have been some trouble with chart headers that were supposed to span multiple columns... let me know if anything's unclear.
Reply to JohnChoiniere