The Wednesday Takeaway
The Orioles took the first two games of the most recent Battle of the Beltway series with the Nationals, and on two separate occasions during the third game of the series it seemed as if the O’s were well on their way to another comfortable victory and a sweep. Baltimore came out of the gates on a storm by scoring five runs in the first two innings. Manny Machado's monstrous two-run shot provided the first fireworks in what would be a lovely night at the plate Baltimore's star.

However, the Nationals are in first place in the NL East for many reasons. Indeed, Washington was able to scratch and claw its way into cutting the deficit to just two runs after the bottom of the seventh inning. Daniel Murphy’s RBI single made it a 5-3 game heading into the eighth inning, before Baltimore put another crooked number on the scoreboard during the eighth inning.

This was when Manny Machado struck again, as his RBI single was the catalyst for another O's rally. Blake Treinen and the Nationals nearly escaped this inning with just a four-run deficit following Jonathan Schoop’s run-scoring single, but Treinen was unable to get an 86 mph slider past Matt Wieters. Wieters proceeded to send said slider sailing over the center field fence for a three-run homer.

Once again, the Nationals picked themselves up off of the mat and came out of the neutral corner ready to swing. Danny Espinosa started off the bottom of the ninth inning with a single. One single and a walk later, the bases were loaded, and with one out and it was time for Daniel Murphy to make his way to the plate.

Things got even crazier when Zach Britton entered the game. He'd gone 43 appearances without allowing a run, as he chased potential history. Bryce Harper and Anthony Rendon worked together to change that.

Britton had given up a run, and this game at Nationals Park had descended into full-on chaos. It was up to Ryan Zimmerman to somehow extend the chaos into extra innings. As it turned out, all we got was a typical 6-4-3 double play.

Order was restored. The AL East contenders had yet another victory over the NL East leaders, and they’ll do it all over again later this evening. They’ll have a tough task on their hands trying to top this rollercoaster of a game, though.

Quick Hits
Yu Darvish pitched a pretty good game against the Reds on Wednesday night. It’s Yu Darvish, so no big surprise. He also hit his first career home run in this game.

It wasn’t even a cheap one either. A 410-foot blast is an impressive shot to have on your resume. Despite the fact that Yu gave the crowd a ho-hum hat-tip as rounded first base, this might be one of the most miraculous moments of the season so far.

The Angels had a lovely night North of the border. They kicked off the scoring against the Blue Jays with Mike Trout channeling the spirit of Angels legend Vladimir Guerrero by hitting a home run off of a ball that absolutely should not have been hit for a home run. 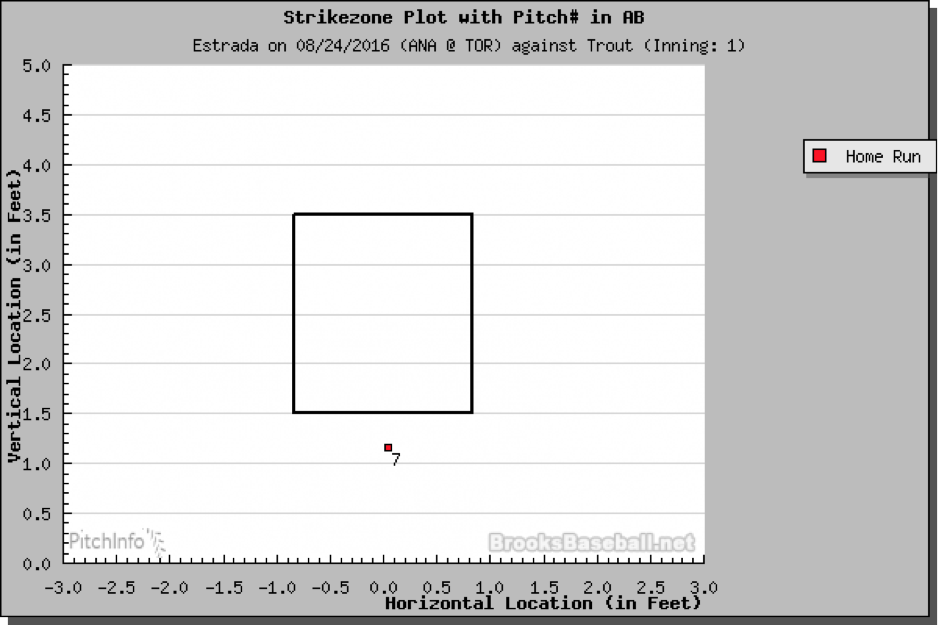 This was immediately followed up by Albert Pujols climbing another rung on the career home run ladder. This was no. 584 for Pujols, and he’s now in the top 10 in baseball history. The Machine’s Hall of Fame algorithm continues to get longer and longer.

Speaking of Hall of Famers, David Ortiz hit another home run last night and that means that we were treated to another one of his regal and leisurely home run trots.

That was Big Papi’s 30th dinger of the season, and he joined an exclusive club: Along with Darrell Evans, he's just the second 40-year-old ever to hit 30 home runs in a season. This is easily one of the loudest retirement tours ever witnessed.

Mike Trout wasn’t the only one who managed to turn an optical illusion into a real-life home run. During Philadelphia’s 5-3 win over the White Sox at the soon-to-be-named Guaranteed Rate Field, Cesar Hernandez hit his seventh career home run. This was his first career opposite field dinger, and it was a weird one because it seemed like it was just a run-of-the mill flyball until it just kept on flying right over the left field fence.

The best part of this is James Shields’ reaction. That is the look of a man who is utterly incredulous with the events that have just unfolded in front of his eyes.

Billy Hamilton made a strong case for winning this honor for a second consecutive night by making another excellent diving catch in the outfield.

However, the nod goes to Adeiny Hechavarria, who made Fernando Rodney and the rest of Marlins Park very happy by laying all the way out to rob Alcides Escobar of a base hit.

What to Watch on Thursday
Hopefully you’ll be in front of a screen of some sort at 8:05 PM ET tonight, since two of the best teams in the American League will be squaring off in Arlington. When these two clubs last met on June 1st, Texas was only 31-22, and Cleveland took the victory and reached the golden land of being a whopping three games over .500 at 27-24.

We’re now a week away from September, and times have changed in a big way. The Rangers are 21 games over .500 now and have new faces Jonathan Lucroy and Carlos Beltran and Carlos Gomez. Meanwhile, Cleveland’s sitting pretty at 19 games over .500, but is shy one Lucroy. Both clubs have relatively comfortable leads in their divisional races, so there’s a decent chance that we’re going to have a possible postseason preview on our hands with this four-game series. The Rangers will have the edge in Thursday’s pitching matchup, with Cole Hamels and Josh Tomlin steering in opposite directions as of late—Hamels is trending positive (3.09 DRA and 85 cFIP this season), while Tomlin is going the other way (4.44 DRA, 105 cFIP).

You need to be logged in to comment. Login or Subscribe
GBSimons
"regal and leisurely" also could be considered "obnoxious and slow"
Reply to GBSimons
seanqueue
"...this might be one of the most miraculous moments of the season so far."

* non Bartolo Colon division
Reply to seanqueue
scylla
Zach Britton's streak of scoreless appearances was at 25, not 43. The 3 runs he allowed on June 21 were unearned, but they still count. (Still having a fantastic season, though.)
Reply to scylla
jfmoguls
Shhsssh. Don't jinx him.

I'm been enjoying the run but always fearful the switch would go off again.

What do his fielding stats suggest about that side of the ball?

I hope he can finish this year in the groove. What a year.

thanks for a great article on an under-appreciated player.
Reply to jfmoguls
jfmoguls
woops wrong article. My apologies.
Reply to jfmoguls
ErikBFlom
I wonder what Zach Britton's double-play percentage is on opportunities. He has like an 80% ground ball rate. That should result in an insane number of double plays when there is a runner on first.
Reply to ErikBFlom