The Tuesday Takeaway
It’s now been three weeks since Jon Niese was traded back to the Mets, and while his return has been lacking on several fronts (namely that of good pitching), it’s at least been interesting. First there were the seven runs allowed in six innings of relief, curious in the ugly way that struggle can often be. Then there was the fact that such a bullpen performance resulted in a promotion to the rotation, even as he was said to be grappling with a sore knee. And Tuesday, there was more frustration to add to the trend.

The Mets jumped out to a 3-0 lead over the Cardinals in the first, courtesy of a three-run Wilmer Flores shot. But that lead quickly disappeared in the bottom of the inning. One walk followed another, with a Brandon Moss single then knocking in the first St. Louis run of the night—and ending Niese’s night after just four batters. The knee was more than sore, and a move to the disabled list would come a few hours later. But first, the Mets had to turn to the bullpen to deal with two Cardinals on with just one out in the first.

Getting the call? Robert Gsellman, brought up from Triple-A the day before, making his major league debut with a runner in scoring position and not too much time to warm up. For his very first pitch….

…a Yadier Molina double that drove in a run. Another would score before the inning was over, allowing the Cardinals to tie the game.

But from there, Gsellman was fairly solid, with three scoreless innings to come (albeit with three walks and a hit-by-pitch). Meanwhile, the Mets continued roughing up Jaime Garcia much in the same way they had in the first inning, and his night ended shortly after a Justin Ruggiano home run in the fourth pushed the score to 6-3.

After Gsellman left at the end of the fourth, the Mets needed to cycle through every member of their bullpen save Hansel Robles to finish out the night. But finish it out they did, despite the shaky start, and the 7-4 victory put the Mets back above .500.

Quick Hits
Niese may have been the only starter pulled in the first inning Tuesday night, but he wasn’t the only one who required early action from the bullpen. Astros rookie Joe Musgrove got his evening started by giving up six consecutive hits to the Pirates—enough for a four-run first inning that had Brad Peacock warming in the pen, though Musgrove was ultimately allowed the chance to get out of the inning. He settled down from there, but it was too late. Ivan Nova was dealing, and the Astros couldn’t do anything to push back on that 4-0 Pirates lead.

It took him just 34 pitches to get through the first four innings. Musgrove, meanwhile, took more than double that to make it through the fourth, and his night was done after that. For some perspective, though—while Musgrove’s night certainly wasn’t good, but it was better than the eight-run, eleven-hit affair that was his last start.

The Pirates’ bats didn’t cool down much for the Astros’ bullpen, including a second homer of the night for Gregory Polanco that put the score at 6-0. And Nova went for the Maddux, getting the complete game (his first since 2013) with just 98 pitches as the Pirates took it, 7-1. 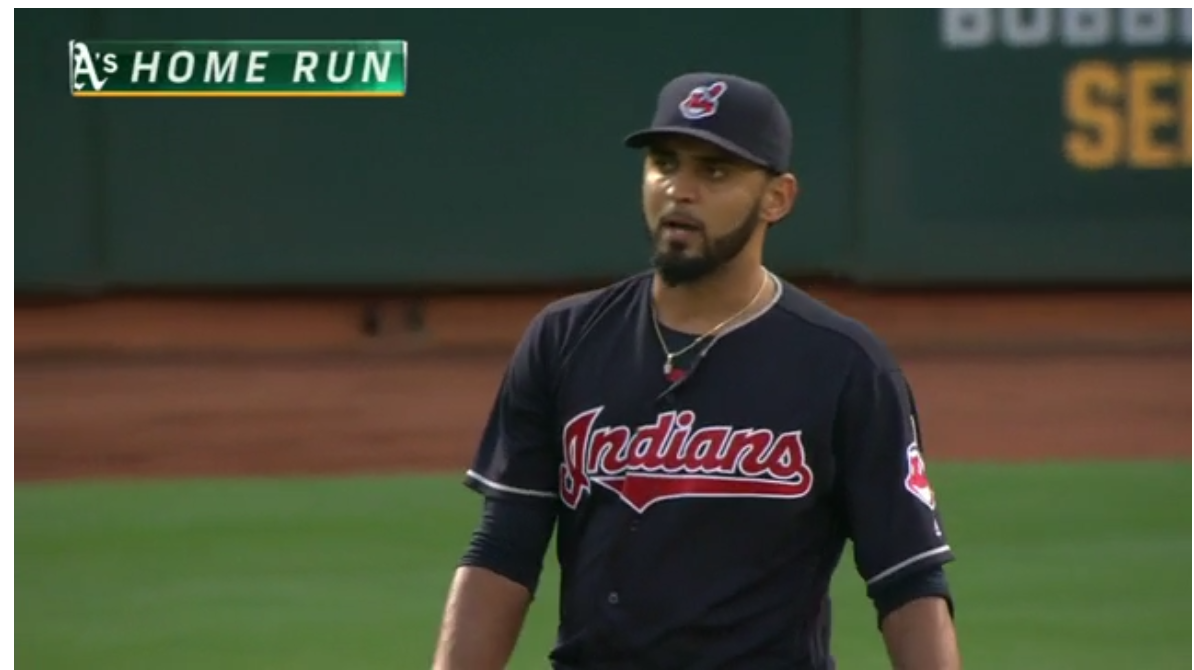 Aghast look above and three Oakland runs courtesy of a Khris Davis blast. Salazar’s night from there was a series of ups and downs. A quick and painless second inning was followed by a third in which his control was totally gone (evidenced by two walks and a wild pitch that led to two more runs), which was followed in turn by another 1-2-3 frame. While he certainly wasn’t back to his sub-3.00 DRA pre-injury self, he showed flashes of that in a way that was wholly absent in his first start off the DL—a small consolation for Cleveland fans in what became a 9-1 Indians loss.

Rookies came up big for the Dodgers—not just the predictably stellar Corey Seager, going 3-for-4, but also Andrew Toles and Rob Segedin, who each chipped in a home run in L.A.’s 9-5 victory over Madison Bumgarner and the Giants.

You know Billy Hamilton is fast. Not just fast, but really fast, unchallenged as baseball’s fastest. You know this. But even with that knowledge, it still doesn’t seem like it should be possible for him to make it clear across center field in time for this sliding catch—but somehow, it is.

And also aware that Billy Hamilton is extremely fast, also in disbelief that this catch really happened: Dan Straily, who shut out the Rangers to give the Reds a 3-0 victory.

What to Watch Wednesday

After being sidelined for weeks by the blister that has nagged him for most of the summer, Rich Hill will finally make his first debut as a Dodger. In his last start, more than a month ago, he was pulled after just five pitches as the blister acted up. The start before that, however, was a textbook example of the Hill we’ve come to marvel at in the last year: one run, one hit, ten strikeouts, crazy curveball. The Dodgers will be hoping that the latter Hill is the one who shows up as they try to extend their division lead over the Giants (10:10 EST).

With nine straight wins making a case not to count them out of the wild card conversation, the Royals will look to stretch their winning streak to double digits—and potentially to overtake Detroit for second place in the A.L. Central. Doing so, however, will require taking down a Marlins team with Jose Fernandez, he of the baseball-best 1.65 DRA, on the mound (7:10 EST).

You need to be logged in to comment. Login or Subscribe
oldbopper
Could it be that the Pitching Whisperer is going to turn another pumpkin into a usable major league starting pitcher. The early results are certainly intriguing.
Reply to oldbopper