There were 15 major-league games played on August 3 and none of them—not even Brewers vs. Padres—featured two teams with less combined playoff hope than the Angels and A’s. According to our playoffs odds from that day, those two teams had just a one percent cumulative chance of sticking around for (non-regular season) October baseball, which means that—barring something crazy—a win or loss would hardly register either way.

Both teams played the game regardless, and the early proceedings went just about as expected. Jered Weaver and Kendall Graveman weren’t fooling anyone, the teams combined for two errors and about five borderline errors through the first seven innings, and even Mike Trout mishandled a playable chance in deep center field. But by the eighth inning, despite the bouts of sloppiness, the scoreboard read 6-4 and the game suddenly adopted that familiar late-and-close feel. Ignore quality of play and plop this game back into a mid-2000s pennant race—back when these clubs were perennial contenders—and it’d fit right in, with similar tension and less Adam Kennedy.

Two bad teams conspiring for an exciting game isn’t exactly newsworthy, of course. What made this game interesting, beyond the score and accompanying big-league drama, was just how much these guys wanted it. We expect baseball players to “try” every night—after all, they’re being paid a lot of money to play a game, blah blah blah, and even if the game isn’t super important, standings-wise, there’s a certain level of professionalism expected with the purchase of a major-league ticket or an MLB.tv subscription package. Then again, this early August affair had a better chance of deciding a protected draft pick than a wild card slot, so for players trying to grind out a 162-game season in one piece, some degree of going through the motions is permitted.

Just don’t tell that to J.C. Ramirez, who entered the game with one out and the bases loaded in the eighth to try to preserve a two-run lead. After walking in a run, Ramirez got Ryon Healy to ground to third for a slow-developing double play, which, according to Dan Hirsch’s and Ben Lindbergh’s revised Championship Win Probability Added, bumped the Angels' championship odds up by all of 0.026 percentage points. Ramirez, who hasn’t earned a positive BP Annual write-up since 2009 and owns a career 5.61 ERA, wasn’t thinking about that as he left the mound.

Still down a run, Coco Crisp led off the top of the ninth by slapping a single into left field. Crisp, now 36, is barely a basestealing threat these days, but he was once so proficient at the craft—he went 120-for-136 from 2010 through 2012 with Oakland—that he garnered features from Jonah Keri (here) and R.J. Anderson (here) in the same offseason. It would be understandable if Crisp played it station-to-station in this situation, having attempted to swipe a bag just 13 times in his past 141 games. But he really wanted to get himself into scoring position.

The pitcher, Cam Bedrosian, was about 1.3 seconds to the plate, with a high leg kick, although he’s allowed just five steals on 10 attempts in 93 major-league innings. The catcher, Carlos Perez, has thrown out a better-than-average 37 percent of would-be base stealers over his two-year career. It wasn’t a perfect situation to run, but with the light-hitting Max Muncy up and the heart of the order to follow, Crisp wanted to get to second with no outs. On his steal attempt, here’s where Crisp makes his first move toward second: 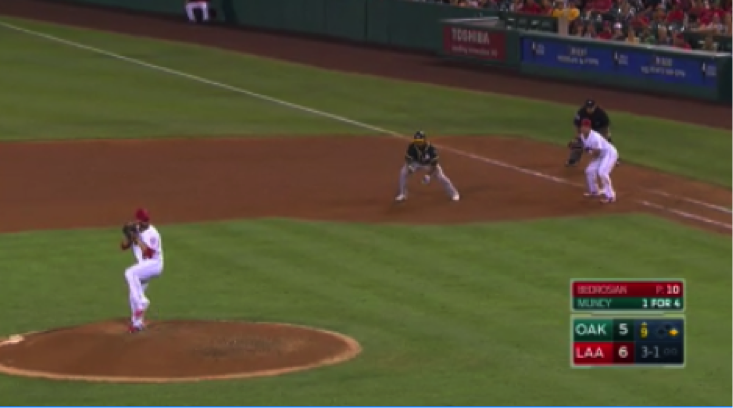 It wasn’t a bad jump, but Crisp definitely wasn’t going on the look, which Anderson tabulated that he did on 35 percent of his steal attempts in 2012. Down a run and with no outs, he couldn’t risk guessing wrong and getting picked off, even if the middle of the A’s order isn’t exactly Murderers Row. The point here? All of the machinations of a pennant race are taking place in a game where the opponents have a combined .448 winning percentage, and the same wheels that were turning for Crisp in 2012—when the steals really mattered—are still turning here, as he desperately tries to time Bedrosian.

In the bottom of the ninth, with the score tied, Trout led off and grounded weakly to third.

There’s still plenty of debate about whether it makes sense to slide headfirst into first base—in a normal situation. With the injury risk considered, it’s probably better (and faster) to just run through the base. But with Healy’s throw pulling Yonder Alonso off the bag, Trout decided, right here, 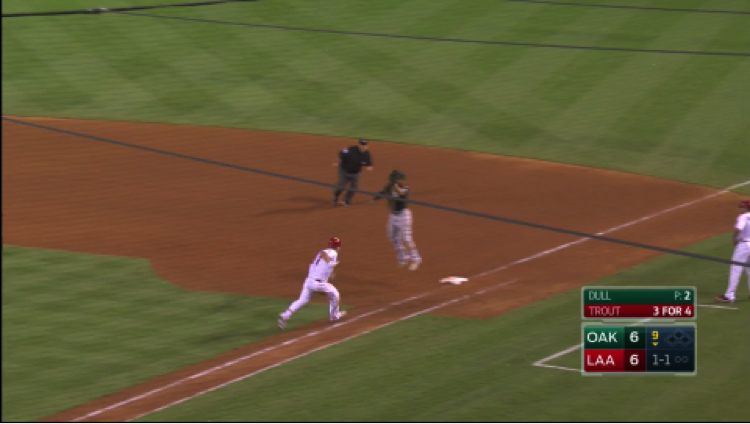 that his only chance to reach was to dive under him toward the outside corner of first. That’s just Baseball 101, with a little Trout magic mixed in . . . but would anybody have hollered during a post-game radio show if Trout just half-heartedly collided with Alonso for the first out of the inning? Probably not, given that he’s the league’s best player on one of the league’s worst teams in one of the league’s least significant games. But Trout wanted to get to first because he wanted to win. So he dove.

Then there was Pujols, who ended things by giving reliever Ryan Dull the Brad Lidge Experience.

After this game, the team’s concluded their series with another extra-innings thriller, then promptly returned to Earth. The A’s headed back home to be swept by the Cubs and the Angels traveled to Seattle for the start of a 10-game road losing skid during which they were outscored 62 to 25. But for a night in August, for a break from miserable seasons and downward franchise trajectories, these two teams met for a game that had playoff feel, at least once the context was stripped away. And the players involved, who are sometimes criticized for treating their job as, well, a job, seemed genuinely concerned with the game’s outcome, from superstar Trout to journeyman reliever Ramirez.

There’s a more cynical point of view here that says that Ramirez wanted that double play because it’ll boost a future arbitration case; that every stolen base helps prolong Crisp’s career by another day; that each additional basehit adds some undetermined amount of money to Trout’s record-breaking free agent contract of 2021; that Pujols has his own legacy to protect. Baseball players operate like most humans, always hyper-aware of their own self-interests. They’re also intensely invested in competition, and at the end of the day—putting individual statistics and contracts aside—most of these guys just want to go home and eat their Wheaties (or study the weather) as winners, at least until tomorrow.