As a die-hard White Sox fan in an era when American League Central baseball was known as nearly royalty, it was frowned upon for me to be as awestruck by the Detroit Tigers as I was. Not even that, it wasn’t okay.

But despite the fact, I was consumed. And at the epicenter of my forbidden fascination was a lanky 6-foot-5 hurler out of Old Dominion University, an up-and-comer with a fastball that grazed 97 mph. I wore my Verlander shirsey proudly around Chicago, and never once regretted it.

In 2006 Verlander was the AL Rookie of the Year. In 2007 he threw the first ever no-hitter in Comerica Park. In 2009, he upped his workload by nearly 40 innings, and subsequently lowered his ERA by nearly a full run, and was well on his on the way to becoming not just a Detroit legend, but a baseball one. Year after year, Verlander climbed the ladder, getting better and better, wearing the badge of “workhorse” with honor, pounding the strike zone night after night, leaving hitters he faced dumbfounded by a fastball that got harder the deeper he pitched into the game.

In 2011, Verlander reached his apex. He won the AL MVP race and swept Jacoby Ellsbury out, while also unanimously winning the AL Cy Young Award. Verlander owned a 2.40 ERA, pitched 251 innings—the most he’s pitched to date, and the most by any AL pitcher since 2003—and struck out 26 percent of batters he faced while walking just 6 percent. The list of Verlander's achievements in 2011 felt endless, including his 100th career win and 1,000th strikeout.

I was 20, and I was the only White Sox fan who considered Justin Verlander her new baseball hero. Verlander was 28, and went on to have a few more impressive, successful seasons, further solidifying that the Hall of Fame talks were merited, until he hit a wall in 2014.

After undergoing core muscle surgery in January 2014, the success he’d known for years prior began to unravel. Injuries led to mechanical issues on the mound, which led baseball to question if Verlander was cooked by 31. That would make him fairly typical in the history of the game, a pitcher who went from dominant to cooked quickly and mercilessly when health woes intervened. Instead, Verlander appears to be the much rarer creature: The pitcher who got injured, looked lost, and almost entirely revived himself. He has the eighth-best DRA in the American League this year, and more innings pitched than all but one of the pitchers ahead of him. He narrowly edges Madison Bumgarner for the 10th best PWARP in all of baseball.

For some perspective, take a look at these numbers that highlight the three versions of Verlander we’ve seen in 2011, 2014, and now with his reemergence in 2016:

Baseball is a game of adjustments, and it's clear that Verlander is not the same as he was in 2011. Nor is he the same as he was in 2014. He's much more of a flyball pitcher now, with a 47 percent FB rate this year that's noticeably higher than his 40 percent career rate. Of those, more flyballs are going for homers, blemishing his otherwise outstanding peripherals.

In 2016, he’s posting a higher swinging strike percentage than 2011, and the second highest of his career, while pitching in the zone nearly 4 percent more, and allowing even less contact while inducing more swings. It sounds like voodoo, but it's not really. Verlander has simply recovered most (if not all) of the velocity he lost on his fastball after all injuries he’s endured. 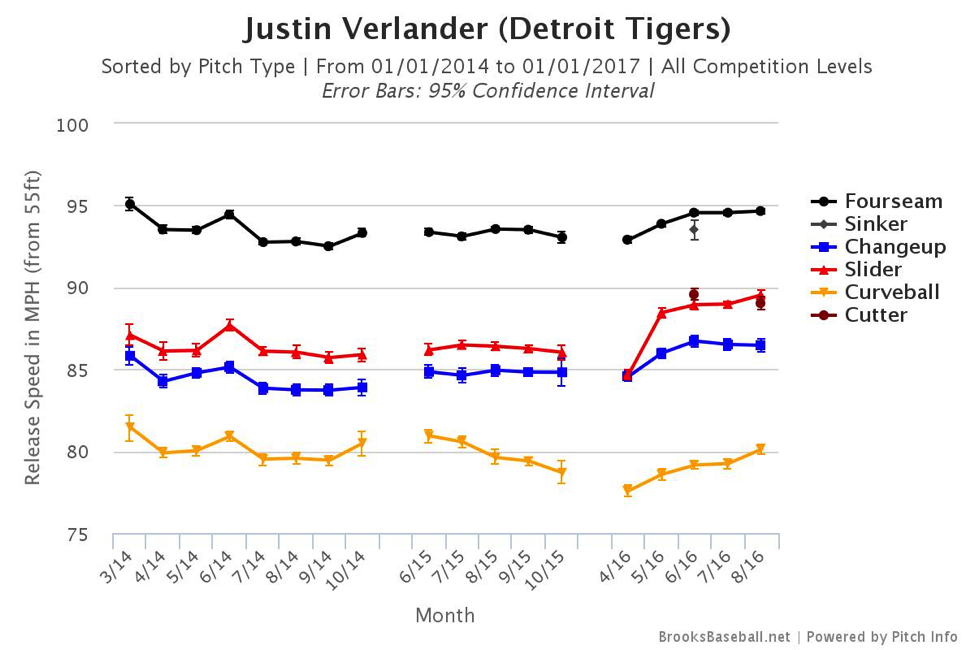 Indeed, Verlander has upped his velocity on all his pitches across the board—especially his slider.

Verlander’s slider has averaged 88 mph this year, and touched 89.5 mph in August. That's up not just from his low-velo years, but from his peak, when the pitch was a slower, 86 mph offering. He is throwing it more often than ever before, and if the extra velocity hasn't shown up in his slider's whiff/swing rate—which, at 26 percent, is nothing special by Verlander standards—it does seem to have made his fastball more effective. Batters are whiffing on that pitch more than they ever have.

(The changeup, which Verlander has decreased usage of in place of the slider, has also seen a quite drastic uptick in velocity, and now sits at nearly 85 mph.)

Verlander is working the strike zone differently, too. He’s throwing his fastballs high, with half of his hard pitchers in the top third of the zone or higher. In 2011, that figure was just 40 percent. Meanwhile, the increased slider usage has allowed him to use the lower part of the zone to get chases. Without much contact on low pitches, the groundball rate has shrunk, but only in exchange for more whiffs. Here's his pitching maps on all pitches, whiffs, and fly balls. 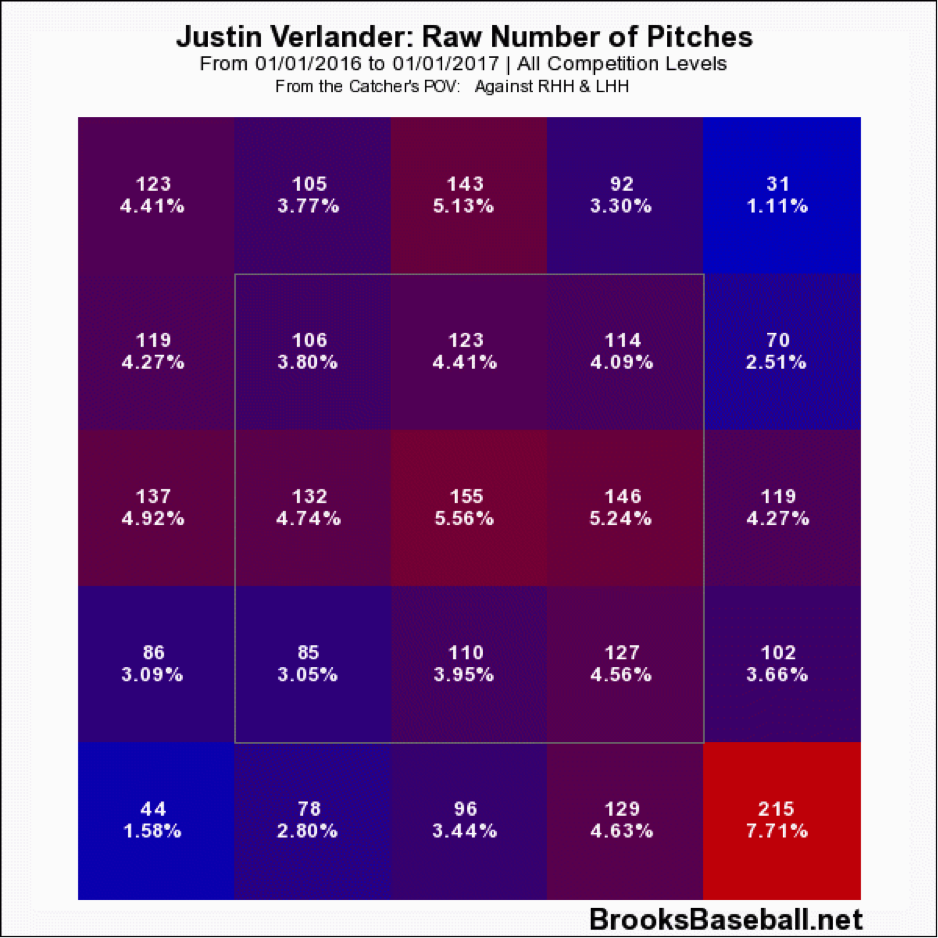 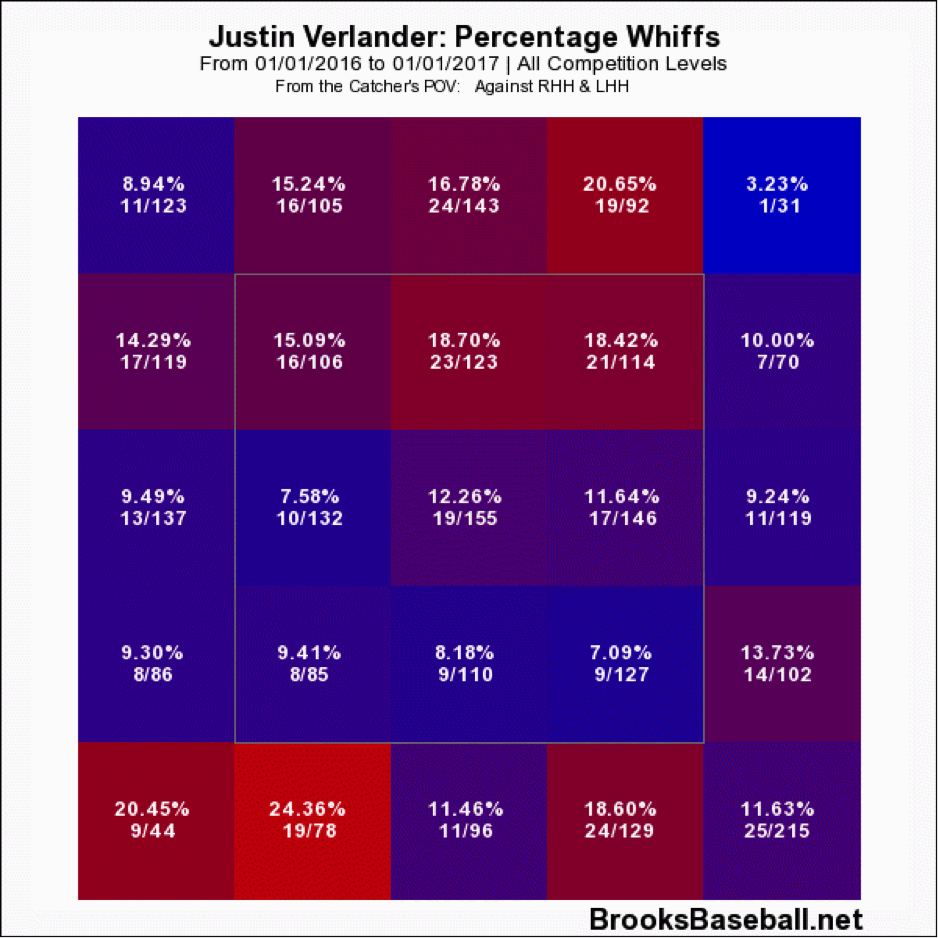 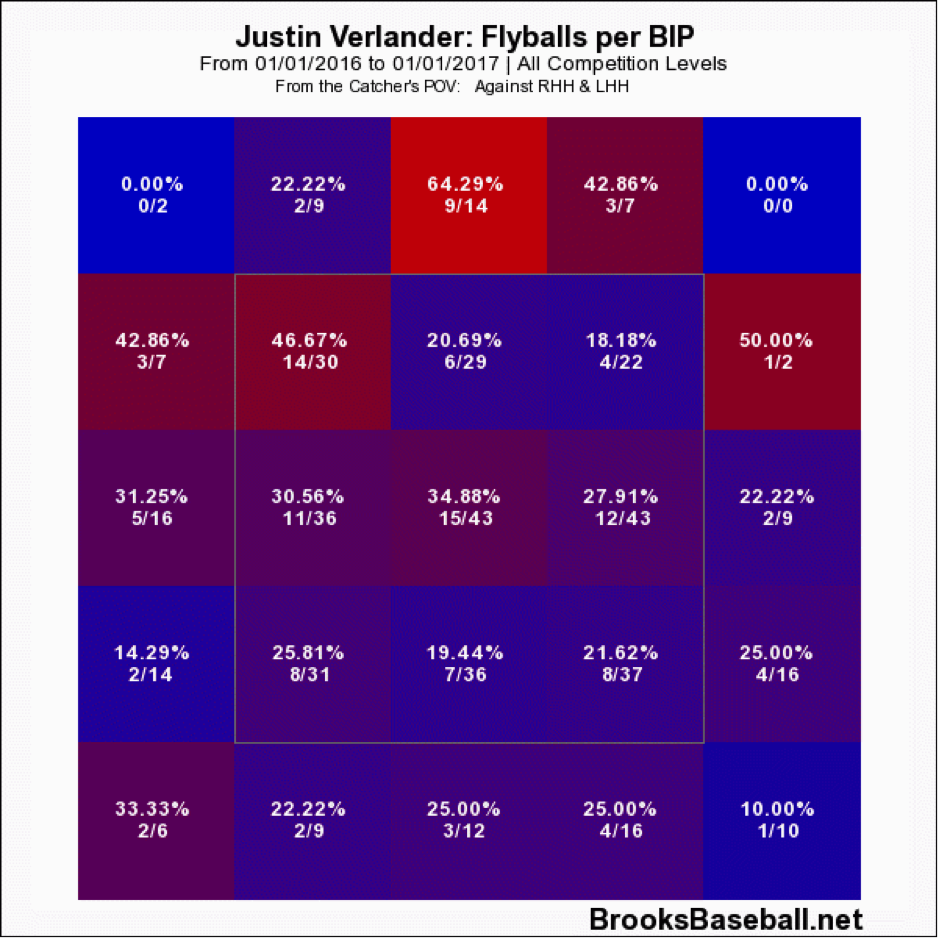 So there you have it. Verlander has come back from what many thought was the baseball dead, kept much of what made him special, but reinvented his approach along the way. Verlander has regained most of his fastball velocity, and found a more effective way to fool hitters, charging up his slider to create a wipeout option that strengthens his whole repertoire.

Three years ago, it was obvious Verlander was bound for the Hall. Two, it looked questionable, and one year ago the proposition was in doubt. Few power pitchers reopen their cases after that trajectory, but Verlander has. He's one of the year's most intriguing aces and comeback stories. Adjustments are everything, and Verlander is proving that nothing can keep him down for too long. That’s the Justin Verlander I was awestruck by. Six years later, I still am.