Two weeks ago, I posted an article about average hitter stat lines and how they’ve changed over time. Furthering my suspicion that I have no idea what’s likely to be popular and what isn’t, it was my most-commented-upon piece yet. Notably, one of the commenters asked if I’d be doing a similar thing for pitchers. At the time, I actually hadn’t intended to—I’m inclined to think the triple slash line lends itself to being mis-remembered/mis-assumed much more than any other stats—but I also appreciate conceptual symmetry, so here we are: How have common, public-knowledge-type stats changed over the years for pitchers?

Picking stats to include here was harder than it was for hitters, and the route I chose was the inclusion of stats that the general baseball audience might have a subconscious feel for, even if they couldn’t name the average line off the top of their heads like they may have been able to for hitters.

Pitchers also presented a categorical (and sample size within category) problem that needed solving, as starters will not have the same summary stats as relievers do. I addressed that by running starters and relievers separately, and by only including pitchers in each respective category if 90 percent or more of their innings happened in the category in question. Within starters, then, I imposed a minimum IP of 100 innings for a season to be included in the sample, while for relievers the cutoff was 35 IP. This created an interesting effect of increasing the sample by 6- to 8-fold in both categories, fairly linearly by visual inspection, over the time course of the data. It’s not clear to me what that means for any conclusions drawn here, but it’s something you should know before looking at what follows. 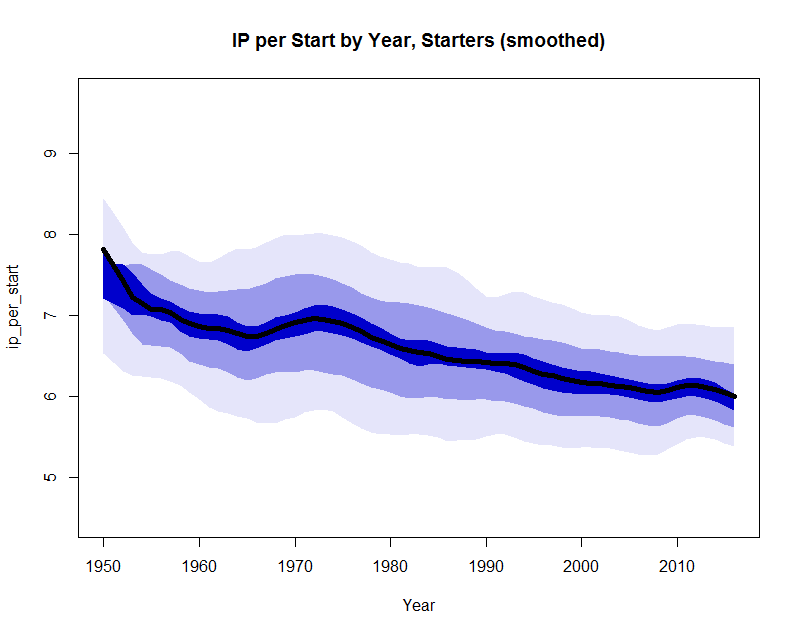 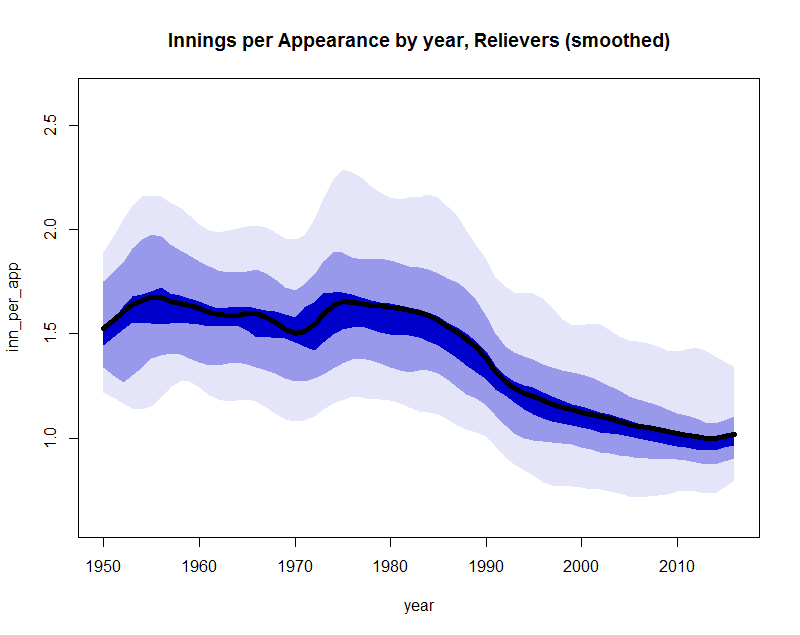 As a reminder (see the prior article for complete detail), the colored bands contain percentiles of seasonal, individual-pitcher data after running it through a LOWESS smoothing process, and the dark band is the league average. What we can see here is that the average innings pitched per categorical appearance (starts for starters, relief appearances for relievers) has declined significantly through the course of the sample. Starters have fallen from an average of almost eight IP/start at the beginning of the data to just over six per start now; relievers have lost about a half-inning in the same time frame, but more proportionally. In each data set there’s a temporary, 70s-oriented increase; starters appear to be continually declining, but relievers might be leveling out a one IP/appearance, which makes sense inasmuch as there are constraints (which some teams are rapidly approaching) on how many relievers are available for any given game. 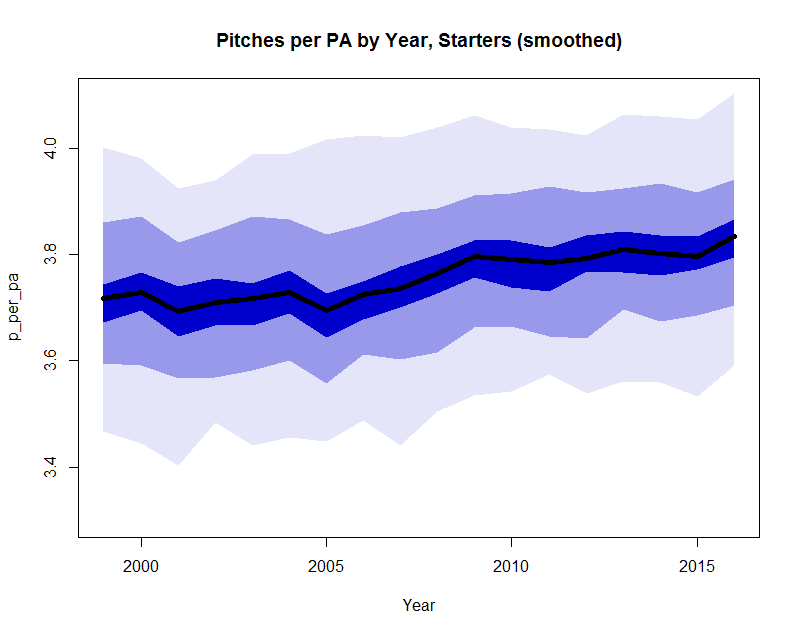 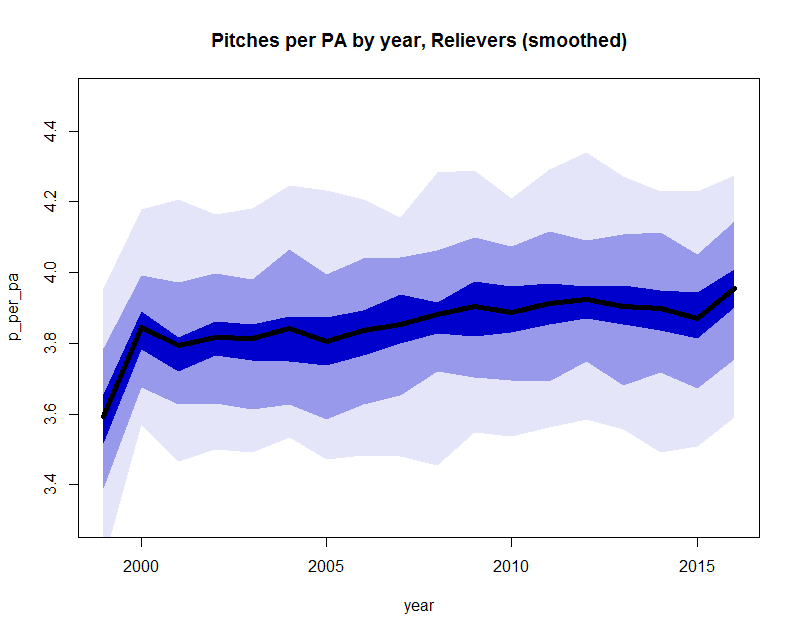 Consistent pitch-count data doesn’t go back nearly as far as most of the rest of what I looked at; it’s really scattershot prior to 1988, but doesn’t appear to really be complete until the 1999 season, and therefore that’s where I started the two graphs you see above. In each case, the distribution stays consistently sized, while the overall level increases by about a tenth (maybe two tenths) of a pitch per PA. That might seem tiny, but that ends up meaning an extra 30,000 pitches or so last year in comparison with the 1999 season, and that might go a long way toward explaining the trend toward larger bullpens—someone has to throw those pitches! It’d be interesting to look into finding the cause of the increase in Pitches/PA, especially whether it’s batter- or pitcher-driven, but that’s beyond the scope of this article. 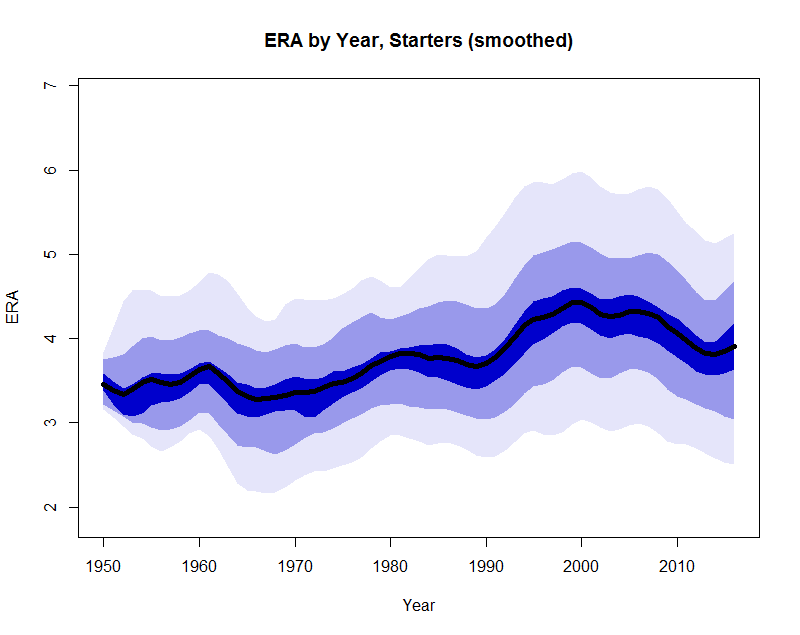 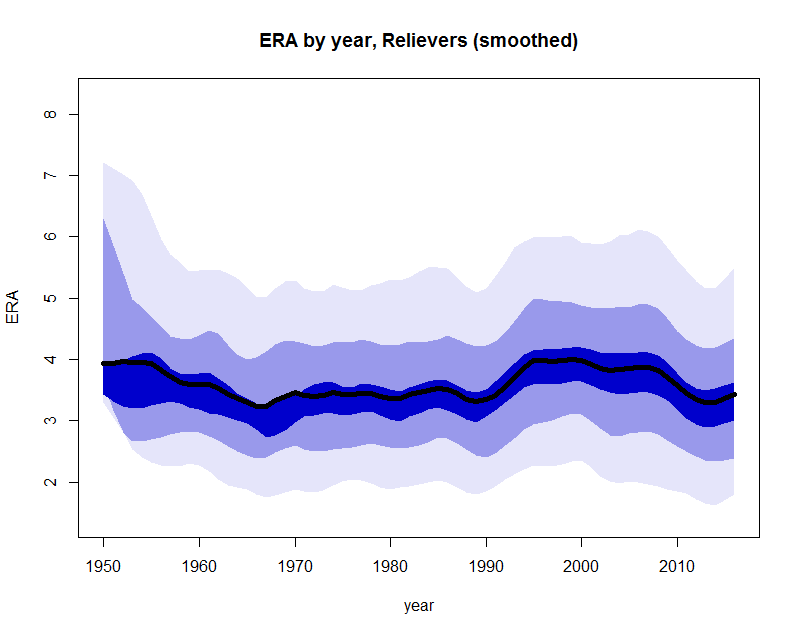 Looking at the ERA graphs emphasizes the necessity of splitting starters and relievers; without the split, the graph would essentially just track runs per game (since reaching on an error isn’t increasing in the course of the data used). By splitting, we can see that the majority of the increase in scoring has come off of starting pitchers, rather than relievers! This makes intuitive sense to me, at least, since increasing reliever specialization favors the pitcher in the batter/pitcher matchup. 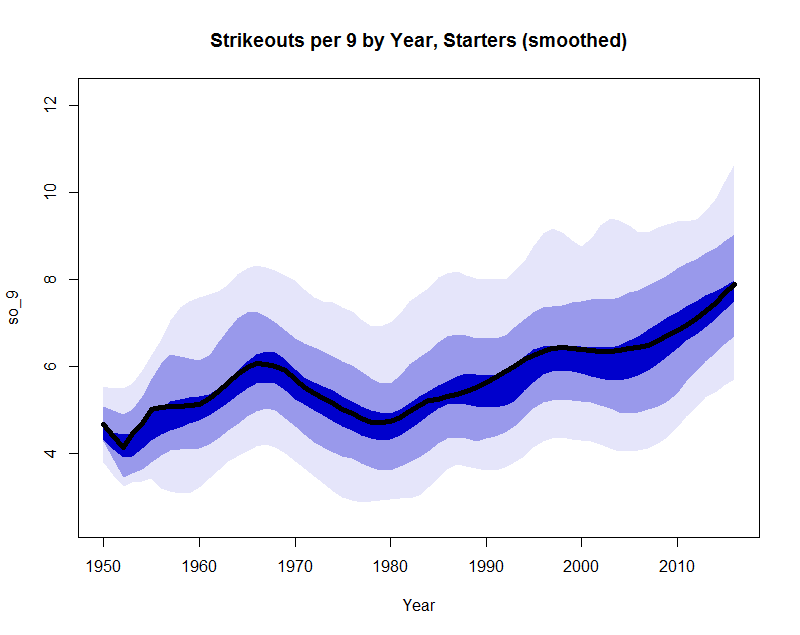 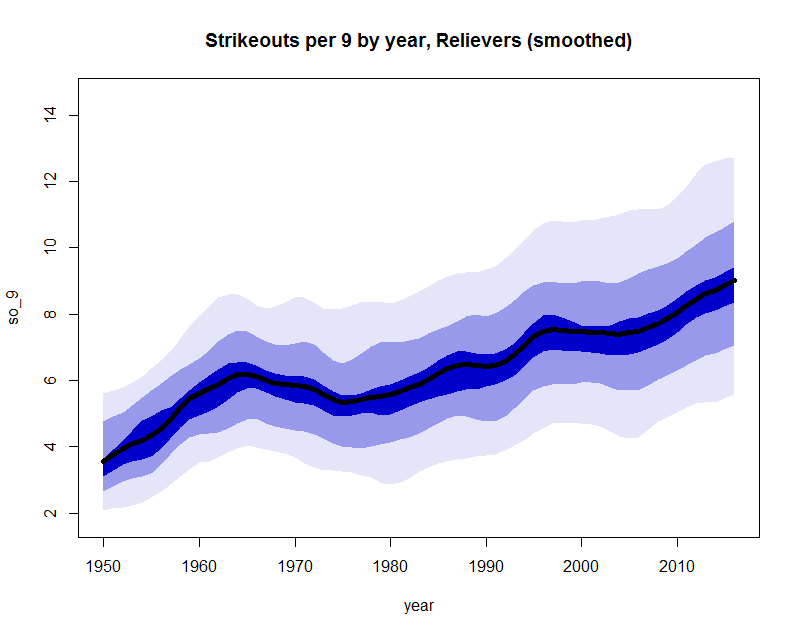 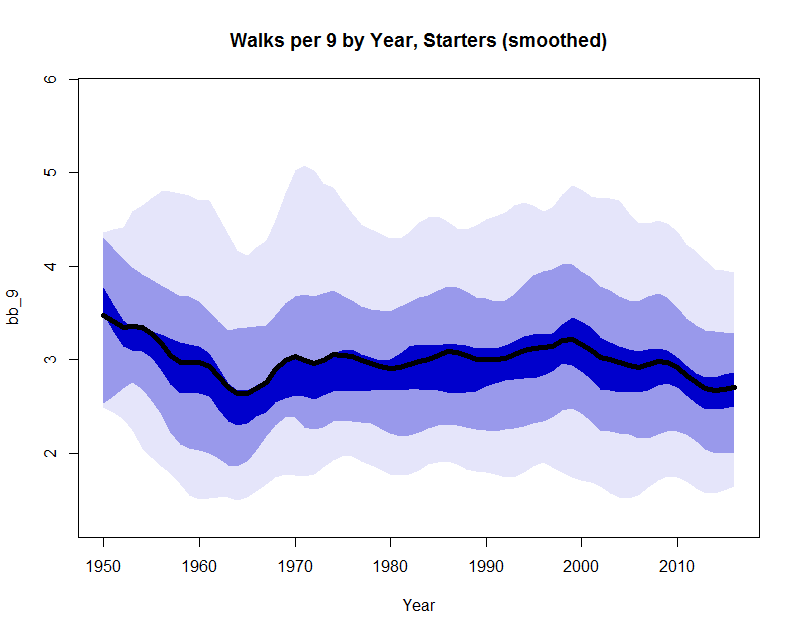 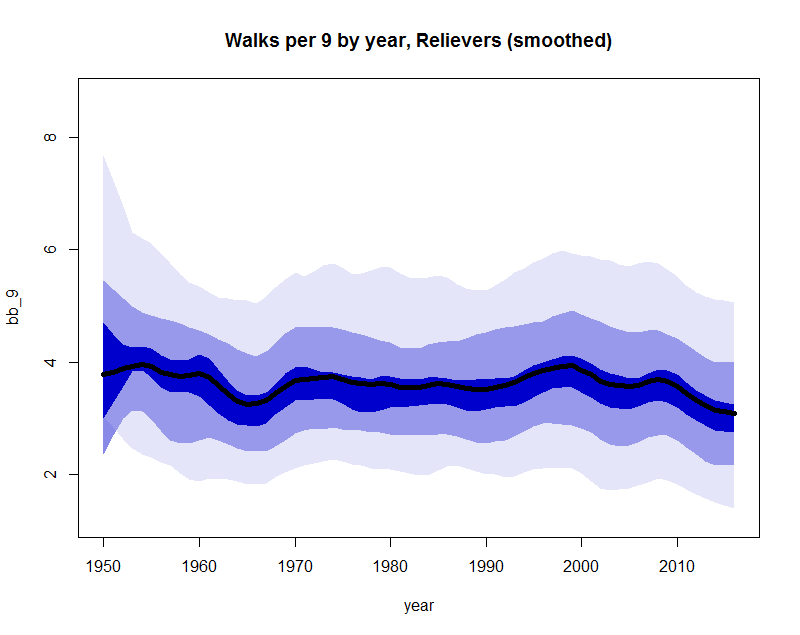 There’s nothing all that surprising in the K per 9 and BB per 9 graphs; as was seen in the batters’ data, strikeouts are dramatically up while walks are flat, and this is true across both pitching categories. An argument could be made that walks had been trending very slightly up since 1968, and that it’s reversed recently, but I think we’ll need to wait for more years of data to say for sure.

This next set, which will be the last one, is included because I had no idea that there was a strong, long-term, league-wide trend, and it really surprised me. That made me think it would be surprising to others, too, but it’s just as likely that I’m showing off a hole in my baseball knowledge. Let’s look at BABIP. 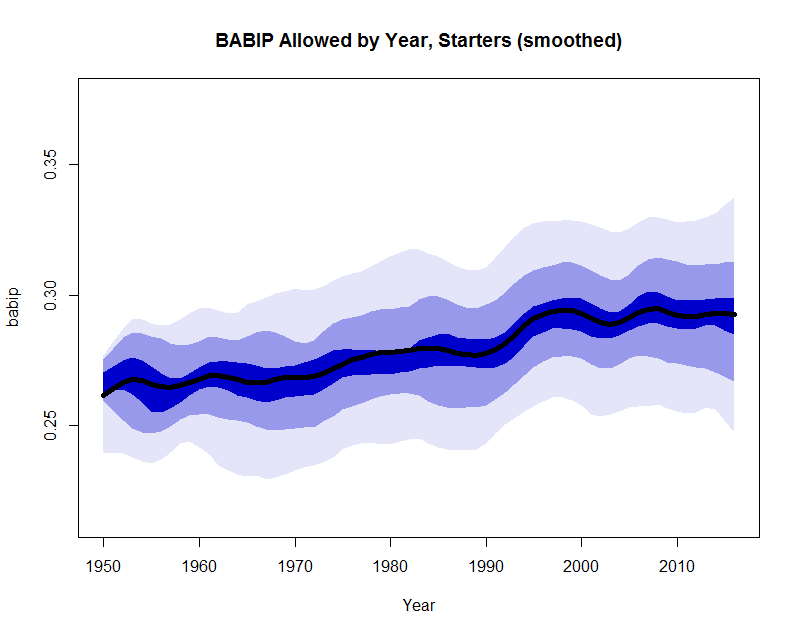 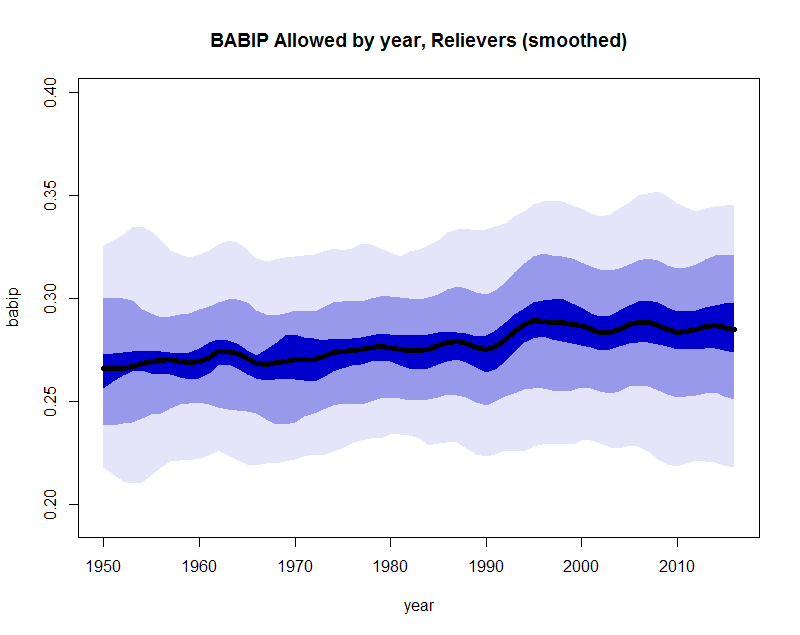 BABIP allowed by starting pitchers is up by about 30 points over the course of the sample, and reliever BABIP is up about 20 points. Particularly with starters, I think there’s a clearly visible long-term and consistent trend upward; the reliever graph looks like it’s leveled off in the last decade or so. It’ll be extremely interesting to see if the increasing use of shifts does anything to reverse the trend.

Okay, so, as with the last article, I’ll conclude by running current player-to-league averages comparisons. Like last time, I included stats not discussed above for the sake of more-accurate comparisons, this time home runs per PA and groundballs per PA. I excluded the “relative error” measure I used last time so as not to make too dense a chart.

You need to be logged in to comment. Login or Subscribe
ErikBFlom
I think it is hilarious that Dickey, a guy who relies heavily on a pitch that is like none other in major league history (the fast knuckleball), is the first column representative from 1994-2008 (with one exception).
Reply to ErikBFlom
JohnChoiniere
A consequence of only using outcomes!
Reply to JohnChoiniere
bisanders
Nice work. Thanks. Regarding the steady BABIP increase over time, I find myself wondering whether this might be at least partly rooted in park construction. Although smaller parks would seem to enhance the ability of the defense to turn batted balls into outs, many of the new parks also reduce foul territory (restricting this ability).

More likely, to me, is that batters generally swing harder. This leads to more homers and more strikeouts, but it should also produce harder-hit grounders and liners.

Another possible cause could be that teams have developed a greater tolerance for poor defensive players, in the continuing quest for more offense.