The Wednesday Takeaway
Back in the halcyon days of 2010, Ryan Howard signed a contract with the Phillies that was meant to keep the big-hitting first baseman as a Philadelphia Phillie for the rest of his productive career. And it did! Since then, Howard has recorded three negative WARP seasons, and he’ll more than likely add a fourth to that tally once the accounting of 2016 is official. That’s a roundabout way of saying that good days have been few and far in between for Ryan Howard since he signed that big contract.

Whenever the good days do come, it’s only fair to take note of them. Wednesday was a good day for Ryan Howard. He pinch-hit during an afternoon game in L.A. and landed the finishing blow in a victory over the Dodgers, turning a game that had been a tough battle into a relatively comfortable Phillies victory.

Jeremy Hellickson had rolled through the Dodgers lineup with relative ease, striking out seven, walking one, retiring 13 consecutive Dodgers—and then his back got tight on him and he disappeared into the visitor’s locker room, not to return. It was a bummer of an ending to what was looking like a real promising start for Hellickson. 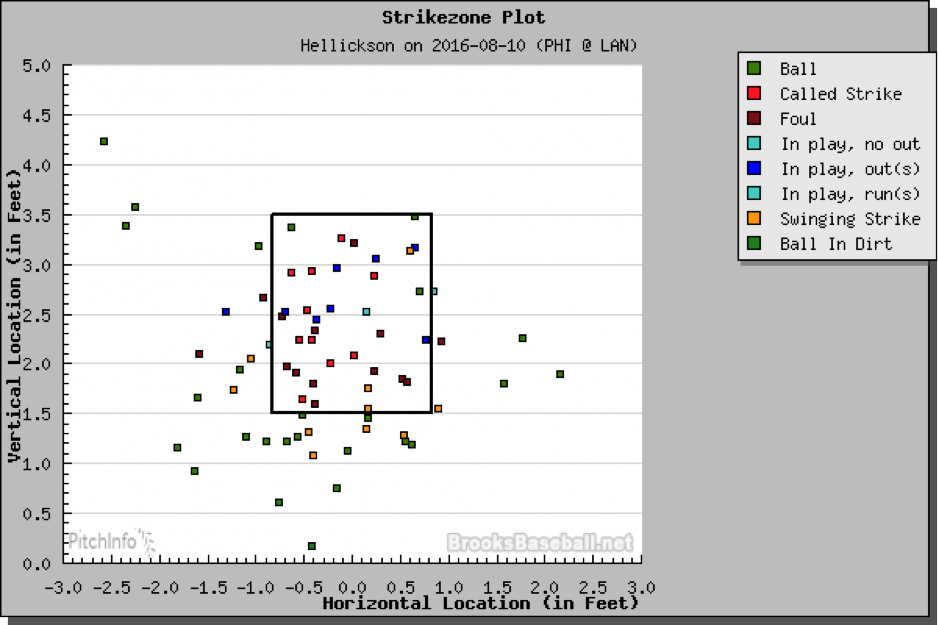 The good news was that he left the game having allowed only one run. The bad news is that for the majority of the game, the Phillies didn’t look like they were a threat to score on the afternoon. But once the seventh rolled around, the Phillies finally got life against Scott Kazmir, putting two men on to start the inning and knocking Kazmir out of the game after his 100th pitch. With Grant Dayton in to relieve, Freddy Galvis kept the line moving and gave the Phillies a lead:

The Dodgers eventually cut that lead down to one, and brought closer Kenley Jansen in to hold the lead to one. Jansen put himself into a bases-loaded jam with one out. That set the table for pinch-hitter Howard:

Again, the good days for Ryan Howard and the Phillies have been pretty rare in recent memory. They might still be rare as we head into the future, but at least for one day and one particular at-bat in Los Angeles, it was like the good old pennant and trophy-winning days for Howard and Philadelphia.

Quick Hits
The Texas Rangers have made a tradition of giving poor Adrian Beltre as much grief as possible by rubbing his head. This even happened at Prince Fielder’s emotional retirement presser, when Fielder partook in the tradition for one final time.

Clearly, Beltre was so thrilled about this that he decided to pay tribute to his recently retired comrade by hitting what amounted to being the game-winning knock in the eighth inning against the Rockies.

For the first time since September of last season, Jeff Samardzija left a game without having given up a run. The Shark didn’t exactly have an extended stay during the afternoon contest in Miami, but it was enough for him to be the pitcher of record, and he kept the Marlins off of the scoreboard during his entire time on the mound. 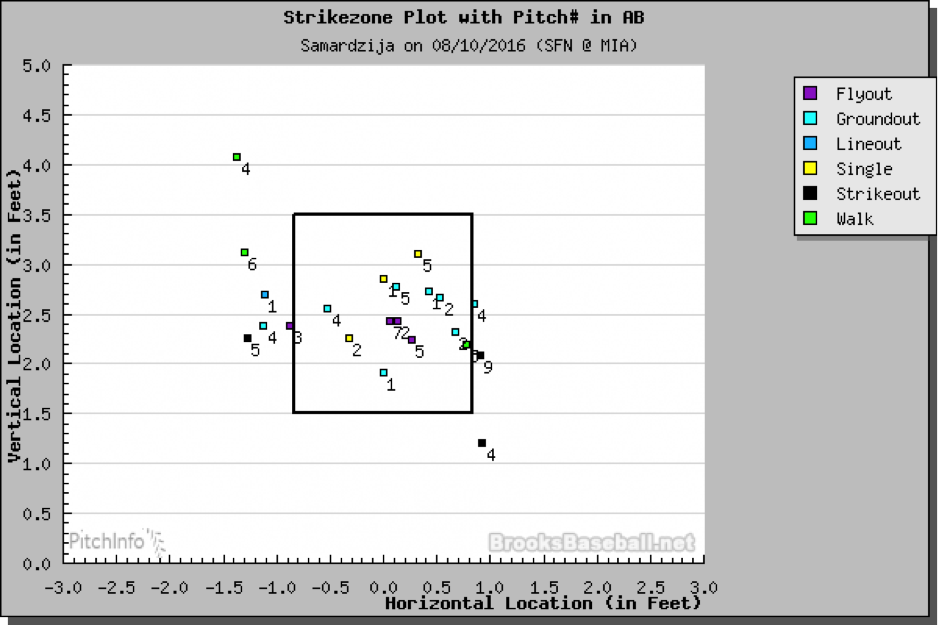 Meanwhile, there was only one run scored on the day, and it came courtesy of Brandon Crawford. His 378-foot dinger ended a 12-inning scoreless streak for the Giants, and was enough to give them their first series win since before the All-Star break.

It was also enough to eventually push frustrations for Miami to the point where Twitter's favorite hitting coach was ejected for arguing balls and strikes.

Earlier this week, Oscar Hernandez was busy honing his craft on the Diamondbacks’ farm with the Mobile BayBears. However, life tends to come at you fast, and Welington Castillo’s trip to the paternity list meant that Hernandez got the call. Hernandez made 36 plate appearances last season and didn’t hit a single homer. This season, it only took him five plate appearances to finally hit the first of his career, and it came at the best possible time for Arizona: During the 12th inning of a tie game against the New York Mets. Obviously, Hernandez was saving his shot for just the right moment.

Defensive Play of the Day
I can’t confirm this, but Nolan Arenado and Javier Baez may have been having a contest to see which one of them could come up with the flashier diving pick at third base. I’ll let you all be the judge as to who made the defensive move look better.

What to Watch on Thursday
Thursday is going to be Getaway Day for 12 teams in baseball, so you’ll have six games to keep an eye on this afternoon. One such matinee affair to keep your eyes on is in Oakland. The Orioles have been sitting at or near the top of AL East for quite some time now, but they’ve got the Toronto Blue Jays breathing down their necks, and they’ve also been having a devil of a time dealing with the Oakland A’s this week. They’ll be looking to avoid dropping a four-game series and potentially dropping down into the Wild Card standings.

As far as tonight is concerned, you can’t go wrong with taking in a Cardinals-Cubs game at Wrigley Field. While things may be close at the top of the AL East, the Cubs are back on fire and have opened up a sizable lead on their rivals from Missouri. Chicago will have Jon Lester going on the mound for them tonight, while St. Louis’ Carlos Martinez will be trying to bounce back from getting battered by the Braves this past weekend. These two teams have been going in completely different paths for the past couple of weeks, and now it’s time to see if they continue going in divergent directions as they meet up at Wrigley for a four-game weekend series.

You need to be logged in to comment. Login or Subscribe
newsense
Baez wins on the nonchalant throw to first!
Reply to newsense
oldbopper
One hop toss doesn't cut it. Arenado wins with good throw.
Reply to oldbopper