The Tuesday Takeaway
Almost everything went right for Max Scherzer against the Indians. The first word of that sentence, however, is really the only one that matters.

He started by sitting down Cleveland’s first three batters with a 10-pitch first inning, seven of which went for strikes, and the next few frames unfolded in more or less the same fashion. After a fourth inning that featured three swinging strikeouts of the top of Cleveland’s order,

it was clear that Scherzer was dealing. With no one yet allowed on base, a reasonable person could start letting his mind wander toward the potential for perfection.

But the Indians weren’t the only ones having trouble scoring. Trevor Bauer wasn’t operating nearly as smoothly as Scherzer, but he was essentially just as effective, and the game headed into the fifth with a scoreless tie. It was time for Jose Ramirez to try taking matters into his own hands with a bunt—and time for Scherzer to make sure it wasn’t happening.

One out later, though, as Scherzer faced Tyler Naquin to try to close out the fifth, the bid for perfection met its end. The rookie took Scherzer’s first—and only—walk of the night. 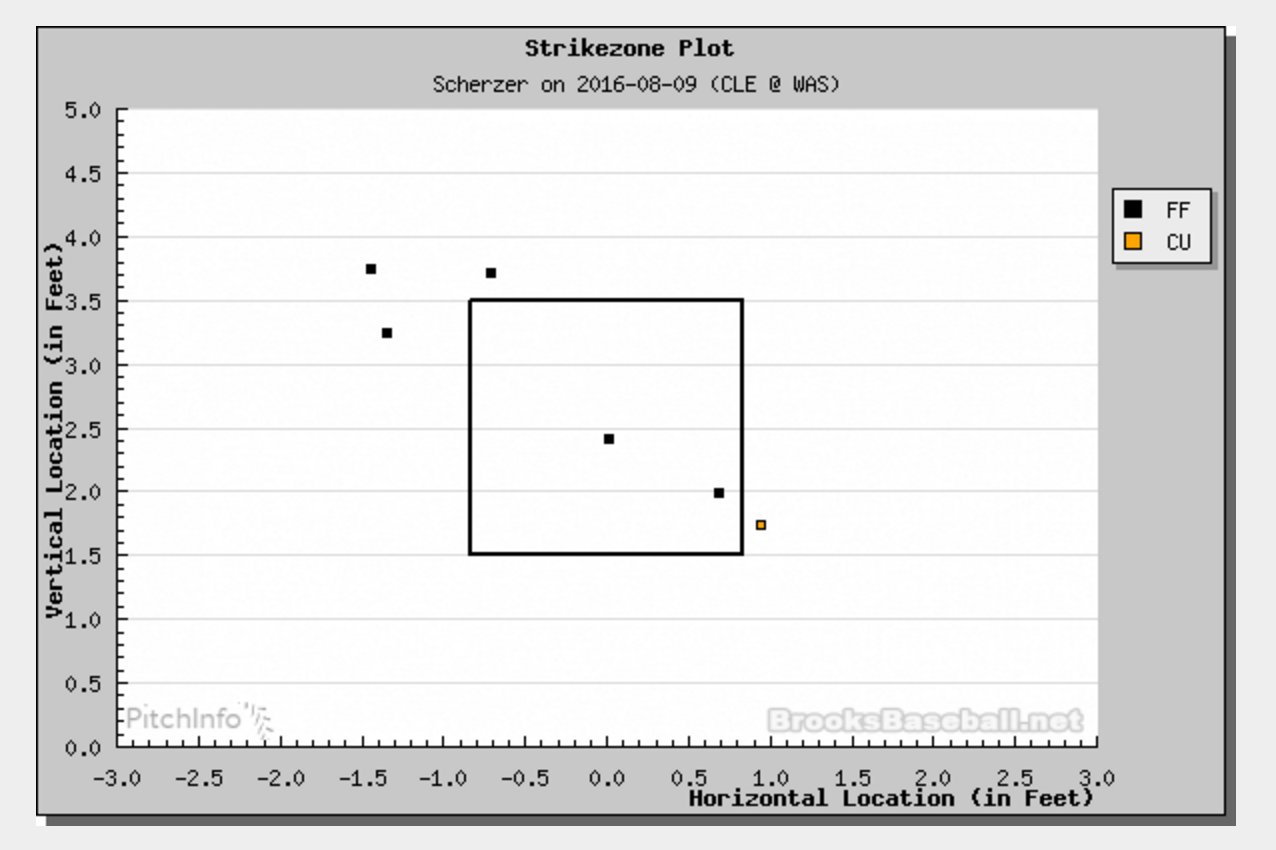 But Cleveland could do nothing with its first man on base, and the game was still scoreless on both sides when Scherzer took his no-hit bid into the seventh (with a special thanks due to Ben Revere, whose leaping catch at the wall kept it alive in the sixth).

The seventh was where it ended, though, and the bid for a no-hitter wasn’t the only thing that unraveled. After Scherzer struck out Jason Kipnis for the first out of the inning, Francisco Lindor took a fastball up in the zone for the first Cleveland hit of the night. And Scherzer’s attempt at rectifying the situation only hurt him more—a botched pickoff attempt meant Lindor advancing to third, before Jose Ramirez drove him in with a double. Cleveland managed to tack another on the board before Scherzer could wrap things up, and the top of the seventh ended with the no-hit bid destroyed and the Nationals in a 2-0 hole.

Which meant that the last person they wanted to see on the mound for Cleveland was Andrew Miller. But after Bauer gave up a double to kick off his part of the inning, the Indians offered more proof that they’re not married to any traditionally set role for their new bullpen arm, and so Miller was tasked with inheriting a man in scoring position to protect a two-run lead in the seventh.

And protect it he did… until he came out for the eighth and offered up a Jayson Werth home run, cutting the Indians’ lead in half. But a Kipnis run in the top of the ninth gave Cody Allen a little more comfort in the closer’s spot, and Cleveland walked away with the 3-1 victory—Scherzer’s six inning gem scuffed by some seventh-inning flaws and, ultimately, all for naught.

Quick Hits
What jumps out about Tyler Chatwood’s stat line is his strikeout-walk ratio, an unseemly 1.43 that’s third-worst in baseball. Judging by that figure, his Tuesday performance was out of the ordinary for him indeed—eight Ks and no walks. Exiting in the seventh with the Rockies up 5-2 over the Rangers, Chatwood had put together one of his best outings of the year, with more strikeouts than he’d posted in a single game since July 2013. But it wasn’t enough to guarantee a Colarado victory, as the Rockies suffered a late-inning collapse for the second straight day.

Compared to Monday’s loss, this one was perhaps a bit easier to swallow, not quite as dramatic, coming in the eighth inning instead of the ninth and starting out with three Rangers singles rather than any flashy displays. But the end result was the same—another Texas comeback, this time with Elvis Andrus driving in the go-ahead run and the Rangers taking it 7-5.

In 14 frames on Monday, the Giants and Marlins gave their best attempt at putting together a seemingly neverending extra inning affair. In 15 frames on Tuesday, the Mariners and Tigers took that model one step further.

A rocky start by Wade LeBlanc put the Mariners in a hole early, but a three-run shot by Kyle Seager in the eighth inning took them into extras. In the 14th, it looked as if the end was near—with the Mariners down to their final relief arm, Tom Wilhemsen, the Tigers loaded the bases with one out. But Wilhemsen worked his way out of the jam, leaving the game tied in the bottom of the 14th, and then the weird extra-inning managerial contortions got under way. Detroit opted to put starter Matt Boyd on the mound, rather than turning to their last remaining bullpen arm in Francisco Rodriguez. The Mariners, fresh out of relievers by the top of the 15th, were forced to make a similar move, putting in Ariel Miranda—who gave up a solo shot to Victor Martinez that put the Tigers ahead. But Seattle answered in the bottom of the inning, and they were not content to simply tie it.

After one inning of work, Boyd was out and K-Rod was in, the Proven Closer preserved until he could enter the game in his natural habitat—and with a walk, two singles, an error and a Mike Zunino sac fly, the Mariners had walked off and the closer had blown his save.

Defensive Play of the Day
Running on Jackie Bradley? Not a great idea, even when he’s misjudged a bounce off the wall. With an arm like that, it’s hard for anything else to matter. The Red Sox went on to beat the Yankees, 5-3, in a game that also featured an anti-climactic bench clearing.

What to Watch Wednesday
With Tuesday holding a Dodgers win and a Giants loss, the two are now tied atop the NL West. Each is wrapping up its series with a matinee on Wednesday—a Jeff Samardzija-David Phelps matchup against the Marlins for the Giants (12:10 EST) and a Jeremy Hellickson-Scott Kazmir one against the Phillies for the Dodgers (3:10 EST).

Facing off against Ricky Nolasco is likely a good recipe for the Cubs to push their eight game winning streak to nine. In his debut with the Angels last week, Nolasco showed that a change of scenery doesn’t have to mean any change in the components of his 4+ DRA, giving up three home runs and letting five runs score. If that’s what he looked like against the As, a match-up against the Cubs and their hot streak doesn’t hold much promise for him (8:05 EST).

Finally, Seattle and Detroit will offer a nighttime battle of the aces, with Justin Verlander going up against Felix Hernandez—two pitchers who offer so much in the way of questions around how we watch our favorites age and what we do when greatness begins to falter and how we ration out our hope when redemption looks possible, but on Wednesday the focus will simply be on whether Seattle can extend their winning streak to six and take over the Tigers’ spot on the outside of the AL wild card race (10:10 EST).