Fill in the blank: Extra-inning games that stretch beyond the five-hour mark are _____.

· D: The stuff counting-stat records are made of

There’s no need to answer that, actually. Monday night’s marathon between the Giants and Marlins was all of the above. Potential storylines emerged throughout the day: Hunter Pence was playing with a black eye, Bruce Bochy was in the hospital, Ichiro Suzuki was returning to Marlins Park for the first time since notching his 3,000th career hit. And plenty more surfaced before the five-hour, 34-minute affair was over.

For one, there were the feckless relief outings of recently acquired lefties Will Smith—who came to the Giants on deadline day—and Hunter Cervenka, who joined the Marlins over the weekend in a waiver deal with the Braves. Both allowed three hits and neither recorded an out.

Then, there was the cat-and-mouse game between Marlins speedster Dee Gordon and Giants catcher Buster Posey. Gordon bested Posey on a delayed steal in the opening frame, despite a Herculean effort by the Giants catcher, who threw around the lefty-hitting Christian Yelich from his knees and made it close enough for Gordon to initially be called out:

Posey, who carried a league-best 47 percent caught-stealing rate into this one, got his revenge on Gordon in the ninth

but is still seeking retribution against the third-base bag, which nearly cost him some teeth on this faceplant:

Despite the best defensive efforts of Stanton and Adeiny Hechavarria, come the 14th-inning stretch, the Giants had 18 hits and 11 walks, which doesn’t often spell good news for the team responsible for letting all those runners reach base. According to the Baseball-Reference Play Index, it was the 76th time since 1913 that a team had amassed 18-plus knocks and 11-plus bases on balls, and those teams were 68-7 before yesterday.

The Giants now own win no. 69, and what’s nicer than that is that a franchise-record seven of those hits came off the bat of Brandon Crawford. Scuffling since the All-Star break with just 15 hits in his previous 75 at-bats, Crawford busted out in a historic way Monday with a double, a triple, and five singles, including the eighth-inning equalizer and the 14th-inning winner:

The single above matched the National League record and made Crawford the first player with seven knocks in a game since Rennie Stennett went 7-for-7 for the Pirates in a 22-0 beating against the Cubs on September 16, 1975. That rout notwithstanding, though, having a player rack up seven or more hits was a coin-flip proposition over the last century and change. Teams that enjoyed that sort of offensive output were just 2-2 before Monday.

With Trevor Story and Aledmys Diaz on the shelf, Corey Seager is primed to run away with the National League’s Rookie of the Year Award. And he’s doing so. Resoundingly.

to put the visitors in an early hole. That deficit ballooned to 6-0 after two innings, and while the Phils climbed to within three runs in the top of the third, they never got any closer. Seager helped make sure of that in the seventh, when Michael Mariot looped a breaking ball and watched the left-handed-batting shortstop curl it inside the right-field pole:

Seager’s second homer of the night and 21st of the season made it 7-3, and the Dodgers went on to win 9-4. They remain a game back of the Giants in the NL West.

After serving as the butt of countless jokes during the first few months of the season, the Reds bullpen came around in July and was on the road back to respectability. That road took a disastrous detour Monday, though, when Bryan Price’s team ventured into St. Louis.

The Reds were on their merry way to victory through eight innings at Busch Stadium, leading 4-0 heading into the home half of the ninth. Rookie southpaw Cody Reed had delivered his best start to date, blanking the Cards for six innings while walking one and striking out four. Cincinnati’s offense had chased Michael Wacha after just five ineffective frames, drawing four walks off the righty while whiffing only a half-dozen times in 86 pitches. And Blake Wood, a big part of the bullpen’s turnaround, had bailed Jumbo Diaz out of a jam while nursing the four-run lead through the eighth.

Then, on came Tony Cingrani, working in a non-save situation for the third time this month after recording his 13th and most-recent save of the season on July 31st. Things were all right, at first, with Yadier Molina’s leadoff single looking harmless after back-to-back fly outs. But then Tommy Pham walked. And then pinch-hitter Kolten Wong was hit by a pitch. And then Matt Carpenter singled in a pair.

Okay, so maybe Cingrani just missed being used as a closer and wanted to create his own save situation, scoring rules be damned. But then Stephen Piscotty singled, and it was 4-3, and if Cingrani merely meant to tease the Redbirds, the joke wasn’t so funny in the visitors’ dugout anymore. When Matt Holliday walked to reload the bases, Price had seen enough.

Ross Ohlendorf was called in to cash in on the save opportunity Cingrani created, but instead, the right-hander picked up where the lefty left off. Brandon Moss was Ohlendorf’s first foe, and he walked,

forcing in the tying run. And now, Molina—who was, a few light-years earlier, standing on first base with two down in this very same inning—was due to bat again. And with Ohlendorf’s help, the Cards catcher finished what he started:

By wearing Ohlendorf’s 1-0 fastball, Molina capped off a five-run rally that took the Reds from the cusp of a 4-0 shutout to the misery of a 5-4 defeat.

Entering play on Monday, the league’s Iron Man streak was among the many accomplishments about which Jose Altuve could boast this year. Houston’s second sacker had appeared in 202 consecutive games, padding the streak past 200 even as manager A.J. Hinch threatened to give him a day off. That rest, wanted or otherwise, finally arrived on Monday,

Jose Altuve has played in 202 consecutive games, but isn't in the lineup today. He could still play, mind you.

when, as it turned out, the Astros could’ve used their best bat in the series opener at Target Field.

Twins starter Tyler Duffey was quite fond of his knuckle curve yesterday, and by night’s end, the guests were thoroughly impressed with it, too:

The breaker was Duffey’s most-used individual pitch in the game, with the righty spinning it 39 times compared to 26 four-seam fastballs and 21 two-seamers, along with a handful of cutters and changeups. Houston leadoff man Tony Kemp got the first look at the hook and came away looking silly:

He wasn’t alone. That low-80s yakker induced 10 whiffs in 19 swings, and just four of the 39 were put into play. As a result, Duffey wound up with eight strikeouts in six innings of one-run ball, outdueling Collin McHugh, who allowed three tallies in seven.

Those three runs weren’t all McHugh’s fault, though. In fact, if position players could be saddled with losses, Carlos Gomez would’ve worn the collar last night. The last of the fifth devolved into a nightmare for Gomez and the Astros, when he misplayed Jorge Polanco’s single into a run-scoring three-bagger:

Then, before Gomez could shake off that miscue, Juan Centeno hit the ball his way and…

…Gomez lost it all together. Centeno then scored from third on a single by Danny Santana, putting the Twins up 3-0. They went on to win 3-1.

Day baseball on a Tuesday is a nice treat—heck, if we had it our way, we’d have a matinee every weekday. Nothing wakes you up from an after-lunch food coma quite like watching a 460-foot dinger, and the Rangers and Rockies both have the sluggers to entertain at Coors Field this afternoon. The only trouble is, Tyler Chatwood has excelled at preventing long flies so far this season, permitting just nine of them in 116 2/3 innings. Chatwood has other warts, a 76-to-53 K:BB ratio being the most prominent one, but he’s outstanding at keeping the ball in the park, and that’s the key to success in Denver. His opponent today, A.J. Griffin, isn’t so adept at avoiding round-trippers. He’s surrendered 13 of them in 73 1/3 innings on the hill, and a whopping 11 in his last 39 2/3, with enemy batters slugging .507 despite a collective .255 BABIP since June 25th. Coors Field is no country for homer-prone men, but Griffin will be asked to overcome the mile-high air before this series moves to Arlington on Wednesday (3:10 p.m. ET).

While some might see hefty breaking-ball usage as an undue injury risk, the Astros don’t seem to mind starting pitchers who junk a lot of their hard stuff in favor of curves and cutters. Collin McHugh and Lance McCullers do precisely that, and now, a fellow member of the Houston rotation might be altering his recipe to match theirs: 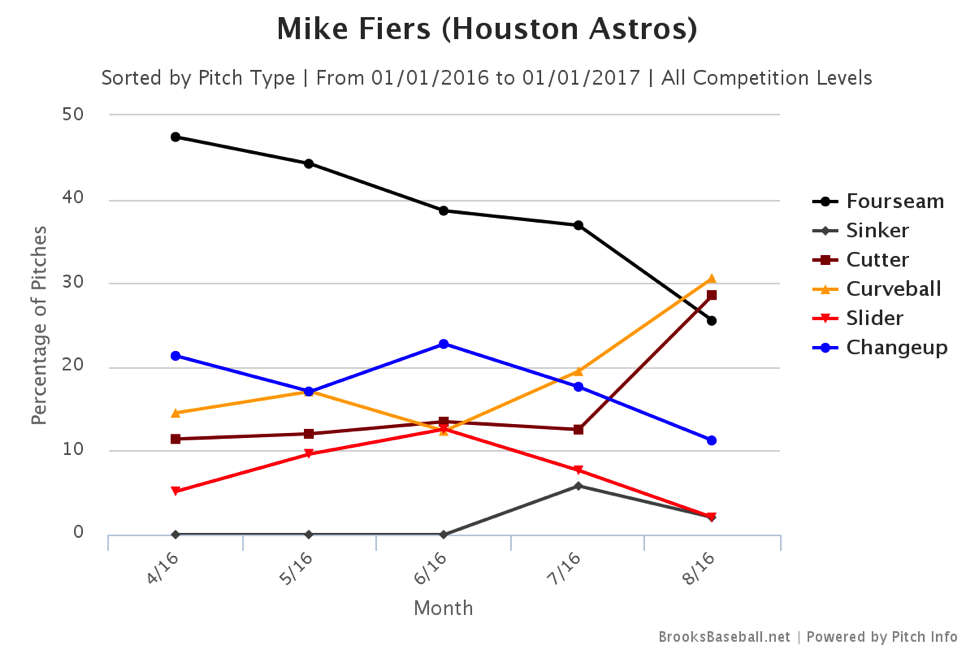 The black line in the chart above, denoting the four-seamer’s share of Fiers’ mix, is plunging like the British pound after Brexit, from 47.4 percent in April all the way down to 25.51 percent this month. The August data point may well be an outlier, since it’s based on a sample of one outing, but considering that the right-hander tamed a powerful Blue Jays lineup on August 4th, there might be more where that came from.

Fiers didn’t walk a batter that day and he matched a season-high with seven strikeouts, two factors that—along with his zero homers allowed—enabled him to hold Toronto to a couple of runs in six innings. Tonight, he faces another quietly dangerous offense in the Twins, who’ve won 20 of their last 32 and had scored 52 runs in August entering yesterday’s game, nine more than the runner-up Rockies. Hector Santiago goes for Minnesota, his first time wearing the home uniform at Target Field (8:10 p.m. ET).

You need to be logged in to comment. Login or Subscribe
oldbopper
Commenting on yet another awful performance by a closer in a non-save situation is NOT beating a dead horse because this horse continues to show up all too regularly. The percentage of poor performances by closers in these situations, by any measuring stick, must be far, far above their records in save situations. Where are the sabermetricians to analyze this obvious fact.
Reply to oldbopper