Every offseason, there’s always one trade during the Winter Meetings—whether it involves your team or not—that you'll remember forever. It’s the hot gossip, the big reset button. And boy, Dave Stewart gave us lonely baseball shut-ins something to sit at our laptops and peck away about on December 9th, when he packaged a deal that sent the reigning no. 1 overall draft pick, Dansby Swanson, with the solid young outfielder Ender Inciarte, and top-50 pitching prospect Aaron Blair to a rebuilding Atlanta Braves team in exchange for starting pitcher Shelby Miller. Minor-league reliever Gabe Speier was also part of the return.

The trade was the source of controversy for weeks, for months, as Arizona’s fanbase waited to see what sort of payoff they'd get when Miller took the mound for the first time.

April 16th. One and two thirds of an inning. Two earned runs. Three walks. Alright, Miller scraped his finger on the mound… a freakish injury that suggested very odd things about Miller's mechanics, and that in no way eased the concern that now sat at the forefront of the minds of Arizona baseball fans.

Fast-forward to the end of May, Miller lands on the DL due to the finger scrape that happened seven weeks prior. It’s time to panic. Minor-league reliever Gabe Speier was… the best part of the return?

Each night, Miller became a person on the mound he did not know. To baseball, he became a stranger. His 7.14 ERA and 5.84 DRA wouldn’t merit even one of the players he was traded for over the winter, much less all of them, much less his first-arb-year salary of $4.4 million.

The All-Star break demotion of Miller to Triple-A Reno was a harsh wakeup call, and—perhaps excepting the recent demotion of Yasiel Puig—the most shocking career breakdown of the 2016 season. Call it the Law of Conservation of Good Baseball Stories: For every amazing career turnaround, for every Rich Hill or Jackie Bradley that we can celebrate, there's a Shelby Miller flying off the rails, reminding us how fragile the most established career is. The Diamondbacks had waved the white flag.

What could lead a pitcher such as Miller to this sort of rapid decline?

The 2015 season was a certainly a strong success for Miller. It was a year that perhaps, in comparison to his previous seasons, looked like either an outlier or a breakout season, depending on your perception of Miller as a pitcher. His pedigree and rookie success probably argues for the latter; PECOTA agreed, giving Miller one of the league's highest "breakout" scores, wedged right in between actual 2016 breakouts Julio Teheran and Kyle Hendricks. At just 25 years of age, Miller is still young and still, apparently, healthy. Besides the incident with his finger in San Diego—which seems like more of a reprieve for Miller and the Diamondbacks to gather themselves than an actual injury, and that doesn't correspond with any anomalous downtick in his season—he isn’t showing any decline in health.

For some stark context, let’s take a look at the difference in his numbers in 2016 and 2015, but to be fair, let’s also hold both against his career numbers:

Park factors are always a concern, seeing as Miller has played in three very different ballparks over the course of his career, ranging from a pitcher’s park in St. Louis, where the majority of his career was spent, to a pitcher's park with one of baseball’s worst defenses behind him in Atlanta, to an extreme hitter's park in Arizona. However, with the slight progression there, the jump in all of his peripheral stats across the board this season make park factors a relative drop in the bucket. There are other things at play here, and there are certain things that have little no nothing to do with where Miller plays.

Rather, it's mostly about where Miller throws. Rule of thumb: A pitcher can succeed by throwing a lot of pitches in the strike zone; or by throwing a lot out of the zone, but getting hitters to chase; and, when those hitters chase, getting them to whiff or hit the ball poorly. But Miller is suffering because all three clauses have eluded him this year. He's throwing the fewest pitches of his career in the zone, leading to increased walk rates; he's getting the fewest chases on those pitches, leading to decreased whiff rates; and, when batters do swing at those pitches, they're actually hitting them hard, leading to one of the league's worst lines when he's ahead in the count.

On pitches outside the zone, batters are slugging .410 against him this year. That's 100 points higher than last year. The NL as a group is slugging .410 overall. 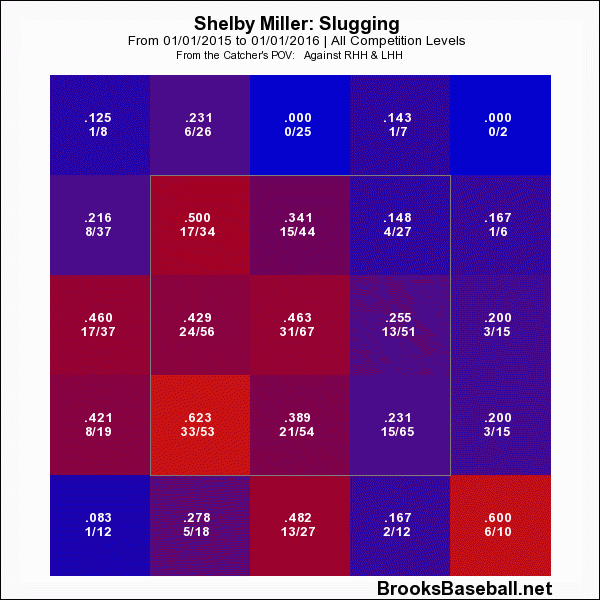 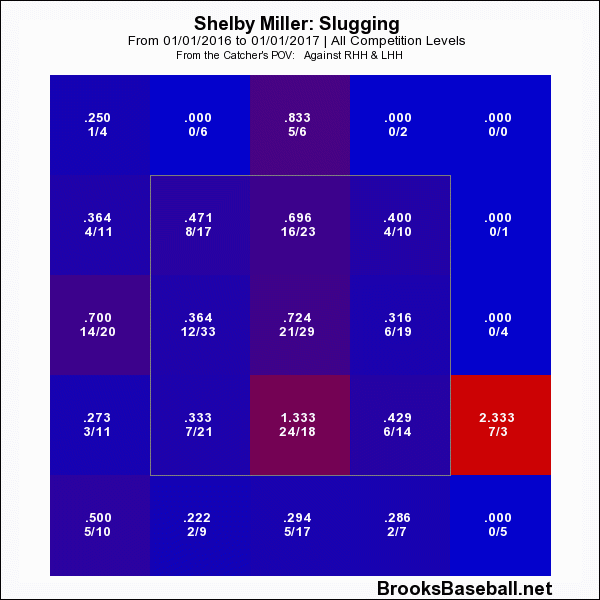 Simply: When Miller doesn't make his pitch, he is, like all pitches, at the mercy of the batter. But when he does make his pitch, batters are simply taking it for a ball or obliterating it. His unadjusted exit velocity allowed is, at 92.9 mph, the seventh-highest in baseball. His pitch velocity, while similar to years before 2015, is also down a bit more than one tick relative to last year.

Mechanics. The age old foundation of good pitching. Mechanics are what destroyed Jake Arrieta in Baltimore and also what made him the 2015 Cy Young award winner he became in Chicago. Numbers tell you many things, but those numbers are a result of a pitcher’s ability and health being built on good strong mechanics that help him maximize and sharpen the tools he already possesses. Without good mechanics, we see Shelby Miller circa 2015 become Shelby Miller circa 2016.

“I’ve had a merry-go-round with these different mechanics which made my mind wander. I kind of got away from who I knew I was. It’s about getting back to the basics and getting my fastball back to where I know it can and touch up on my off-speed pitches.” Miller told the media after his first start at Triple-A Reno on July 20th.

Perhaps Miller just didn’t click with the crew in Arizona. Perhaps he went down the rabbit hole of trying to fix what wasn’t broken. But what baseball knows is that Miller is not this version of himself. Miller may not be a top-of-the-rotation starter, but he’s certainly not someone who should own an ERA north of seven.

This seems like it should be fixable. Maybe Miller just needs a new pitching coach, or maybe a release from the burden of struggling with a new club. Maybe he needs to be somewhere that didn't trade the reigning no. 1 overall pick, a solid young outfielder, and a top-50 pitching prospect for him. At the trade deadline this week, Miller was generating "a ton" of interest, according to reports. Even now, with the deadline passed, he's a player who could be appealing to any number of teams that have early waiver-claim priorities this month, who might see in Miller the type of upside that won't be available on this year's thin free agent market. The Diamondbacks would have to accept a far, far smaller return than they traded just eight months, but if anybody has ever been a change-of-scenery candidate, it's this guy.

You need to be logged in to comment. Login or Subscribe
earpbartman
Could pitch selection have played a part in it too? If I remember right, he was having a rough 2014 until later in the year when Masterson was traded to the Cardinals and taught him a 2-seamer. He picked it up and finished that year well. It was his most-used pitch in 2015 and he acknowledged how much he liked it. Now this year he almost completely abandoned it. Could that be due to organizational philosophy? Messed up mechanics not letting him execute it well enough to use?
Reply to earpbartman