This monthly award is named in honor of Ryan Vogelsong who, in 2011:

The Vogelsong Award goes to the best player and pitcher who were given little or no attention in the Annual. There are two types of Vogelsong Awards. Full Vogelsongs are awarded to players who aren’t mentioned in the Annual at all. Lineout Vogelsongs go to players whose Annual entry is limited to a short Lineout description given to less prominent players. Prior winners (see list below) and foreign players who signed after the Annual’s deadline (sorry, Kenta Maeda) are ineligible for the award.

Enough suspense. Here are the winners.

JULY FULL VOGELSONG PLAYER OF THE MONTH: Jett Bandy, Los Angeles Angels. This was a tight contest. There were several players not in the Annual who surpassed Bandy’s .286/.379/.459 slash line in July, but they didn’t approach Bandy’s 59 plate appearances, not to mention his name. (Jett is his real first name.) While his batting numbers don’t come close to the 2.500 OPS he accumulated in limited play last season, limited play in his case consisted of only two plate appearances and, of course, no mention in the 2016 Annual. He’s exhibited good plate discipline, with a 17 percent strikeout rate and 10 percent walk rate in July, and he’s contributed 1.2 Framing Runs behind the plate so far this year.

[Annual Editor's note: Bandy was on a preliminary list of 81 Angels who would get comments, but was one of the players trimmed to get to the more conventional 65-70 players per team.]

JULY FULL VOGELSONG PITCHER OF THE MONTH: Brandon Kintzler, Minnesota. Kintzler, who turned 32 on August 1, had a streak of five straight Annual appearances snapped after he pitched only seven big-league innings with Milwaukee last year. After 10 appearances at Triple-A Rochester, he joined the Twins in May and moved into the closer role the following month, after erstwhile closer Kevin Jepsen’s ERA topped 6.00 and he was shipped to Tampa Bay. In July, he compiled a 1.50 ERA in 12 innings and got five saves. He was one of only nine pitchers (minimum 10 innings pitched) to enter games with an average Leverage Index in excess of 1.80. His 0.86 WPA was the eighth best among relievers in July. He struck out only six batters in 12 innings but walked only one, didn’t allow a homer, induced groundballs at a rate approaching 60 percent, and did it all while allowing a very mortal .357 BABIP. His chief competition was from Braves (now Rangers) starter Lucas Harrell, who had a 3.57 ERA and a similarly low whiff rate (15.5 percent compared to Kintzler’s 12.2 percent), but he walked more, had a lower groundball rate, and benefitted from an unsustainable .250 BABIP.

JULY LINEOUT VOGELSONG PLAYER OF THE MONTH: Ryan Schimpf, San Diego. Your National League home run leader in July. He bats left, and so far this year, Petco Park has an 82 home run park factor for lefties, the second lowest in the majors. So he’s not a creation of his home field, where he hit only two of his nine bombs. The Padres’ second baseman ranked tenth in the league with a 14 percent walk rate in July while slashing .269/.387/.705, enough to overlook his fourth-highest 31 percent whiff rate. And he’s added 1.5 FRAA and 1.5 BRR to his offensive production. He didn’t make his first start at second until June 17, after the Padres had tried Cory Spangenberg, Alexi Amarista, Jemile Weeks, Adam Rosales, Jose Pirela, and Yangervis Solarte at the position. His Lineout in the 2016 Annual: “In April, Ryan Schimpf homered off Luis Severino, which will make for a great bonding moment with the four Blue Jays who accomplished the same feat in 2015, when they meet 30 years in the future to sip coffee and compare their lives.”

JULY LINEOUT VOGELSONG PITCHER OF THE MONTH: Junior Guerra, Milwaukee. This is what my life’s come to: Spending Friday night at home, watching the Brewers host the Pirates on MLB.tv, cheering for Junior Guerra to wrap up the July Lineout Vogelsong award. You probably know his backstory, but if you don’t: The Venezuelan was drafted by the Braves as a catcher when he was 17 and hit so well (.213/.245/.355 over four seasons) that they moved him to the mound. He was lit up to the tune of a 6.91 28 2/3 innings in 2006, didn’t play in 2007, and pitched for four Mets affiliates sandwiched between winter ball in Hawaii and Venezuela in 2008. The following spring, though, the Mets released him after a positive PED test, beginning an odyssey through Venezuela, Mexico, Spain, Italy, and the independent American Association in 2009-2014. That earned him a free agent contract last year with the White Sox, for whom he compiled a 3.13 ERA while striking out 105 in 80 1/3 innings divided between Double- and Triple-A in 2015. He also pitched four innings in June for the big-league club. The Brewers got him off waivers in October, and after four starts in Colorado Springs, he was called up to the Brewers in May. All he’s done since is rank eighth in the majors in ERA (2.70), 29th in DRA (3.70), and 39th in cFIP (96). And he’s a 31-year-old rookie whose Annual comment was, “Junior Guerra pitched in 12 different leagues, in five time zones, over nine years, before finally reaching the big leagues in 2015. One can only imagine how he felt after giving up singles to the first three batters.”

J.P. Breen’s Buyers Guide last month is a nice review of Guerra’s performance. He’s 40th among ERA qualifiers with a 48% ground ball rate, a consequence of his down-in-the-zone pitch location: 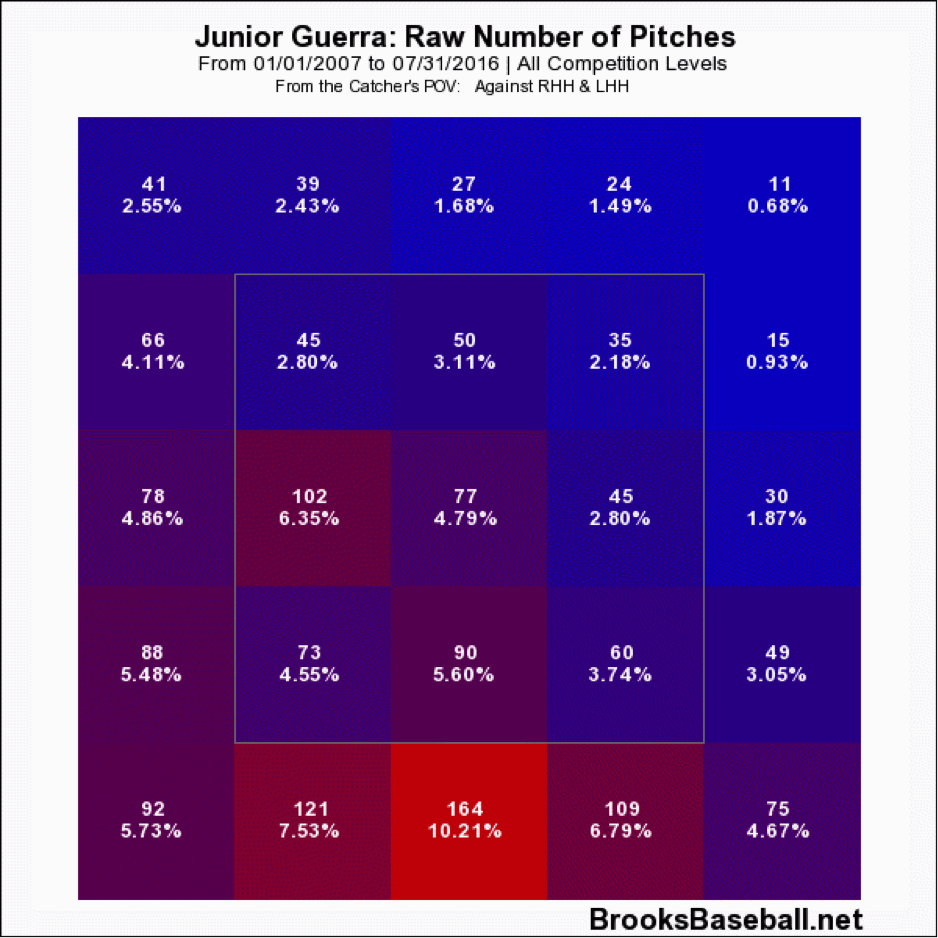 Anyway, in July, Guerra had a 1.59 ERA, trailing only Max Scherzer’s 1.32 in the National League, and his groundball rate rose, just as it did from May to June. He was aided by a .204 BABIP, and is K/BB was only 1.92, but hey, he was good enough for the Vogelsong.

[Annual Editor's note: One editor actually argued to cut Guerra entirely, even from the lineouts. "Junior Guerra could probably justify a cut as a 30yo reliever who just debuted, but indie baller who made the majors and pitched well in Triple-A." The other two editors ignored the suggestion, and Guerra survived.]

Congratulations to our winners! They can preorder next year’s Annual, in which they are virtually certain to be mentioned, after the season ends.

You need to be logged in to comment. Login or Subscribe
jonjacoby
Maybe the hitter award should be named for David Peralta? He was the first "successful" hitter that I remember BP making a "big deal" about not including in the Annual.

I will say it's one of my favorite fun features.
Reply to jonjacoby