…right from the start. Four strikeouts in the first two frames, and he rolled from there, allowing more than a single baserunner only once in his seven scoreless innings of work.

The Mets’ offense, meanwhile, had given him little reason to get comfortable. After scoring once in the third courtesy of a Rene Rivera double, they couldn’t manage to put anything else on the board. Loading the bases with no outs in the seventh seemed an apt opportunity (with Steven Matz pinch-running, thanks to a short bench), but a frustrating trio of forceout, strikeout and flyout quickly handled that.

Then it was time for the eighth and… Addison Reed, the closer’s role he’d been promised the night before notwithstanding. With the Mets clinging to their one-run lead, it looked like Familia could be available for the ninth after all. And after a 1-2-3 inning by Reed, he was. Familia wasn’t going to close, until he was.

Though Familia has by and large gotten the job done this year, he hasn’t done so nearly as effectively as he did in last year’s breakout season—a 3.61 DRA compared to last year’s 2.82, and shakier control as seen in a BB/9 that’s gone from 2.2 to 3.7. And, after Thursday’s outing, back-to-back blown saves.

He started by allowing a single to Trevor Story, who went ahead and stole second. Then came a walk to David Dahl, 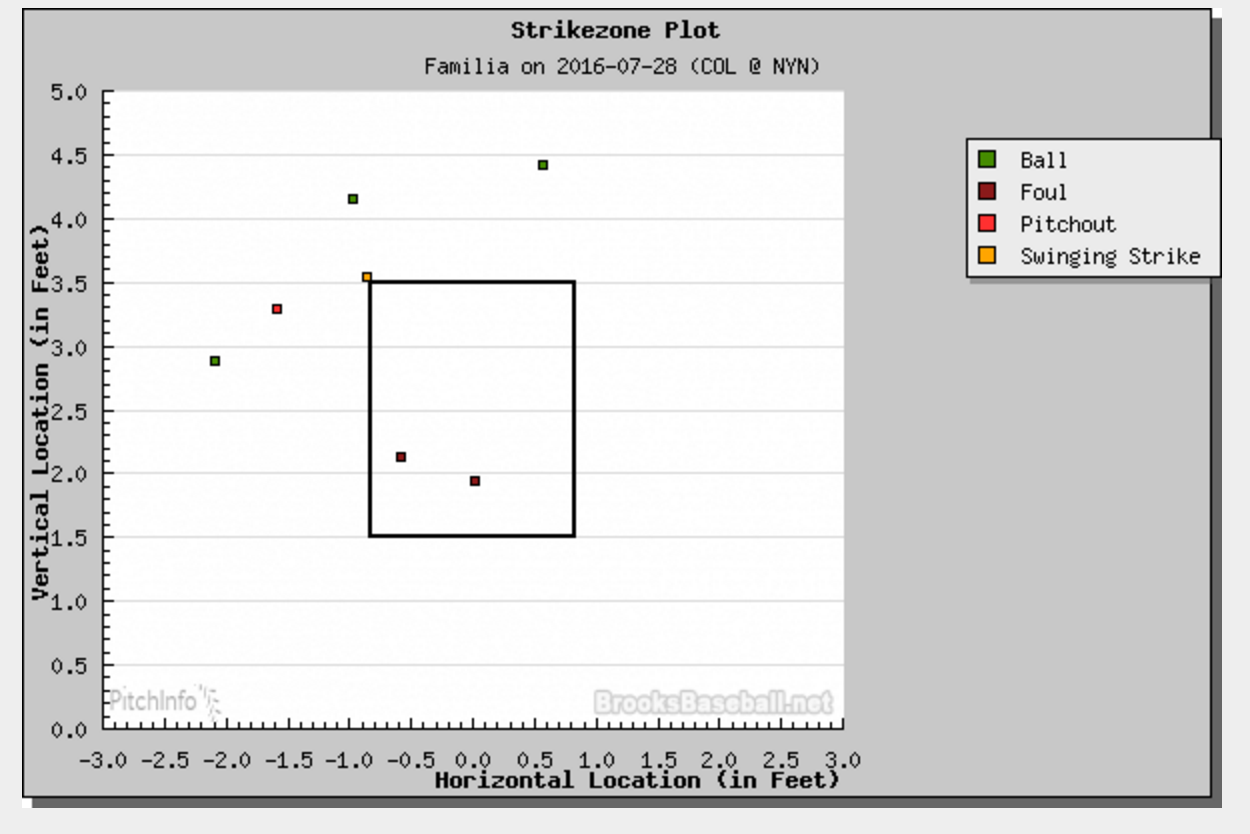 and then a Daniel Descalso bunt to load the bases with no outs. But unlike the Mets two innings earlier, the Rockies were able to do something with the situation. For a moment, it looked as if Familia might be able to hold it together, striking out Tony Wolters to record his first out. But then James Loney struggled to field a broken-bat grounder from Christian Adames, and the game was tied—and with Charlie Blackmon up next, Familia unraveled a bit more.

After intentionally walking Blackmon, he was done, and though Hansel Robles wrapped up the inning without incident, the damage was done as the Rockies took it 2-1. Familia wasn’t going to close—and he didn’t.

Quick Hits
Even on a bad day, Jose Fernandez is still Jose Fernandez. On Thursday—which was, for Fernandez, a bad day—this meant nine strikeouts mixed in his five innings of two-dinger, five-run work. The Cardinals came to life in the third with an Aledmys Diaz homer, followed shortly by another from Matt Holliday, and after tacking three more on the board in the fifth, they’d ended Fernandez’s day in what was his shortest outing since early May. Included in the loss for the Marlins? The return of Dee Gordon from an 80-game PED suspension, with a videotaped apology that played before his 0-for-4 performance (an apology for using PEDs, not going 0-for-4). And Ichiro drew one step closer to number 3,000, with a double in the seventh to put him at 2,998.

Also returning from a suspension, albeit one much briefer and cut from a different cloth, was Chris Sale. With the White Sox wrapping up the series with their crosstown rivals, Sale faced off against John Lackey. Both teams got on the board quickly, scoring one apiece in the first, but Lackey shut the White Sox down from there, while Sale and the pen that followed him could not quite do the same in reverse. With a 3-1 lead and one out to go in the eighth, the Cubs turned to Aroldis Chapman for his first save in his new uniform. He delivered, dipping below triple-digits just a few times in his spotless four-out performance, as the Cubs took the victory. 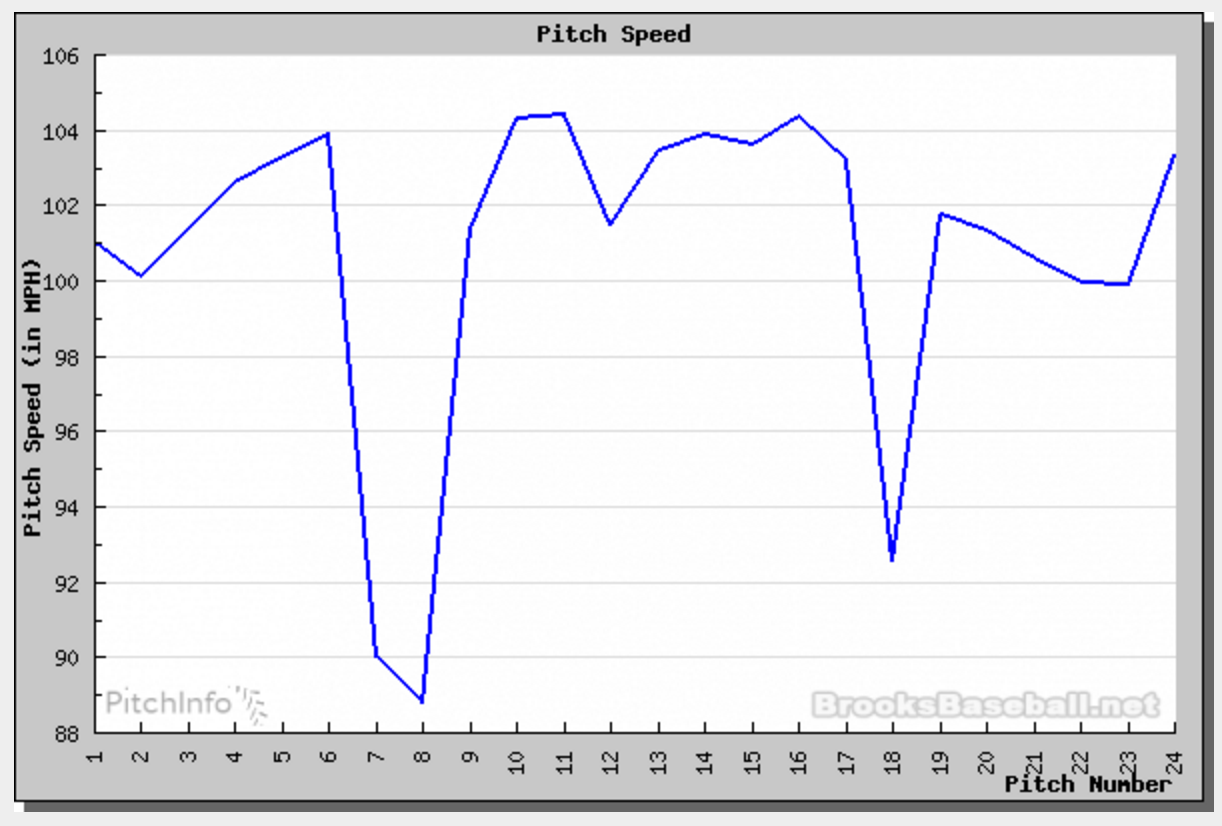 Hanley Ramirez’s outfield defense is associated with nothing good—unease, panic, a vague sense of existential dread, maybe. By comparison, his first base defense typically looks okay. It did not look okay Thursday. Bottom of the ninth, Red Sox up 1-0, bases loaded for the Angels and…

Angels walk off, 2-1, as the Red Sox drop their fourth straight.

Defensive Play of the Day
Bryce Harper took a break from providing offensive highlights to offer up some replay material from the outfield with this diving catch on the run. Nationals went on to best the Giants, 4-2.

What to Watch Friday
The Orioles have dropped three straight, putting their division lead over the Blue Jays at a game and a half. They’ll try to stretch that lead on the road in a weekend series in Toronto, starting Friday with Kevin Gausman on the mound, coming off one of his best outings of the year and going up against Marco Estrada (7:05 EST).

While the Giants are tasked with battling the second best team in baseball in the Nationals, the Dodgers have a bit of an easier task as they try to make up ground on San Francisco’s two-game division lead— taking on the Diamondbacks. They kick off the series with Kenta Maeda versus Zack Godley (10:10 EST).