On June 21st, having collected saves on three consecutive days, Brad Ziegler got the night off and the ninth inning belonged to Daniel Hudson. There are varying degrees to which the transfer of power in a bullpen is “real”—if the Diamondbacks had lost by 13 to Toronto that night, Hudson would have been like the Vice President who technically takes over as President while the real LOTFW undergoes dental surgery. But the game was close, and Hudson was brought into it, and he got three easy outs. He collected his first save and lowered his ERA to 1.55 on the season, and to 3.12 since the start of 2015, when Hudson’s status as One Of The Best Stories In Baseball took hold.

Two weeks later, Ziegler was traded, and this is when the VP would be sworn in for real, except by that point—just two weeks later—Hudson had allowed 13 runs in three innings across six outings, and in the Diamondbacks’ first game after the Ziegler trade Hudson was summoned into the seventh inning, not the ninth. He allowed two runs. Then four runs in his next appearance, then, after one scoreless outing, four in the one after that, and then three without recording an out on Friday. Entering play Sunday, Hudson had allowed 28 runs in his last eight innings. Imagine a starting pitcher making four starts in a row, not making it into the third in any of them, and allowing seven runs per. Daniel Hudson.

This is heartbreaking, especially because Hudson is, by virtue of a starring role in Jeff Passan’s excellent book The Arm, our latest reminder that ballplayers have rich internal lives that suffer as acutely from disappointment as those of you and your mom and your best friend. I mean, just try to get through this:

At the lowest moments of his rehabilitation, Daniel Hudson would log into his email account and search for a message hidden in the depths of his in-box. When it popped up, Hudson knew he shouldn’t click on it. He did anyway. He scrolled down and saw the memo from Billy Ryan, the assistant general manager of Hudson’s team, the Arizona Diamondbacks. It was a contract offer.

An offer that Hudson had turned down just after establishing himself as a no. 2 major-league starter, and just before he underwent the first of two Tommy John surgeries that would first threaten, then permanently alter, his career. Hudson turned it down because all he needed to do was avoid catastrophe, and he’d eventually hit arbitration and then free agency and make far, far more than this extension would give him. When he couldn’t avoid catastrophe, he pulled himself back until he again walked onto a major-league mound, throwing 3 mph harder as a reliever than he had as a starter before the surgery. Free agency was coming. He wouldn’t get nine figures, like no. 2 major-league starters get, but now he was so, so close to becoming a closer. All he needed to do was avoid catastrophe.

But now Daniel Hudson hits free agency in three months, and he’s got a 6.81 ERA.

This is, no matter how you look at it, more terrible luck in a career that has had some terrible luck. But, the dozen or so contenders who are in need of relief pitching must’ve asked themselves over the past week, which kind of terrible luck?

Let’s consider the three levels of pitcher performance: On a per-pitch level, on a peripherals level, and on a results/batted ball level. (All numbers through July 28.)

On a per-pitch level, you would never notice a problem. He’s throwing as hard as he did when things were working, and at the most basic level he is as effective getting strikes and swinging strikes.

Peripherals
Here it gets bad, but, then, you knew when the guy’s ERA went from 1.55 to 25.88 there were going to be bad outcomes, peripherally and otherwise.

That is not the profile of a good pitcher, over the course of 55 plate appearances. We don’t generally judge pitchers based on 55 plate appearances, though, and the difference between that and his established, successful peripherals—about five missing strikeouts, about one extra homer, about one extra walk—are not nearly enough to explain an extra 22 or so runs. What is? Obvs,

Percussion
When the ball has been struck, it has tended to land safely. Imagine what you think I’m going to say his BABIP has been over this last month. It’s higher than that.

It's actually .610 now, after the weekend. Ten of the 55 batters he’s faced have hit for extra-bases. Take out those 10, just turn them all into outs, even the homers, and batters would still be hitting .326 against him since June 23rd. With two strikes, batters have put 17 balls in play and collected hits on 14 of them. It’s on every pitch he throws,

and—forgive the ridiculously small number of pitches in each zone here, and embrace the sentiment—it’s no matter where he throws it: 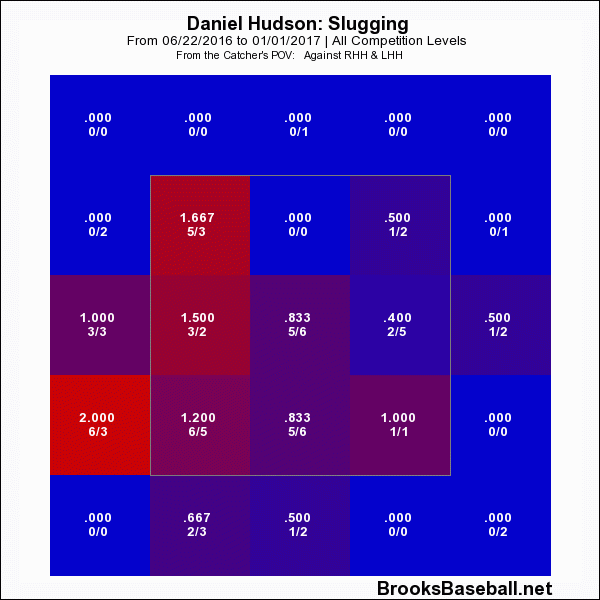 It's also somehow no matter that, by unadjusted exit velocities, these pitches are not even being hit harder, 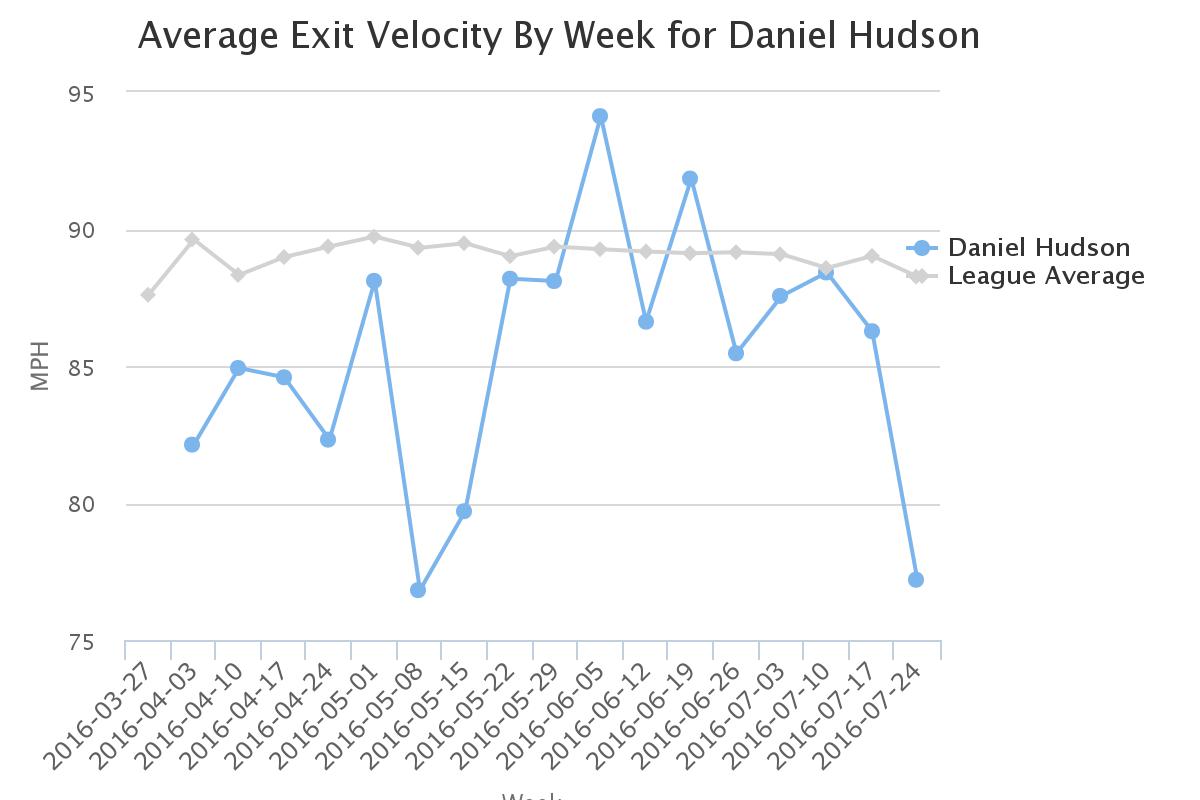 though a line drive's a line drive, and a 75 mph line drive is going to be hit a lot more often than an 85 mph groundball, so.

It all adds up to this: The dozen contenders in need of relief help probably didn't know what they're getting from Hudson, and neither do we. The totality of it suggests that Hudson has missed with a few more pitches than usual—he has; I omitted those charts, but he has—but, beyond that, and for no obvious reason, batters have hit line drives on a much higher percentage of his pitches—the good ones and the bad ones—than usual. An underappreciated aspect of luck in baseball is that the other guy might just be on that day, or he might just be off; batters pop up in BP, and they hit your best pitch for a double; there's no way to defend against the other guy having a balanced breakfast. Hudson might have just run into an incredibly bad run of guys having the best seconds of their lives.

Look at what Ryan Madson got last offseason ($22 million), and then look at what Fernando Rodney did ($2 million, with a cruel $1 million club option tacked on). Those are, more or less, the two stories Hudson could have taken into this offseason; he almost had the first, now he might get stuck with the second. It's a difference of quite possibly $15 million or so, in a career that might not add up to $15 million at all now. After a couple more months of this, we'll find out that he broke, which will be heartbreaking, because he knows more than anybody how hard it is to come back from a break. Or after a couple months in which he rights himself but enters free agency with an ERA in the mid-5s, we're going to suspect that he actually never broke at all, the cruel, random timing of which will be just as heartbreaking. Or, at least, it'll be heartbreaking until the day Hudson does, finally, get the big free agent payout that allows him to quit opening that email from Billy Ryan.

If there's any salvation here, it was going to come this weekend, when Hudson was going to get traded. Almost happened on Thursday afternoon,

which inspired most of these words. Somehow, through it all, the Diamondbacks still seemed to have found a contender to take Hudson and put him into a playoff race. His season could still have ended in a dogpile, and if he did get right again, it was quite possible he'd do it on the biggest stage in front of the biggest audience. Praise the baseball gods, it seemed, for always planting a good story in front of us.

Then the tide changed.

Dave Stewart said Dbacks have been close to making a deal in recent days. "I thought I was close," he said. "I did. Then the tide changed."

Daniel Hudson has allowed 23 ER in 8 innings since June 23. The #Dbacks would move him, but they're getting little to no interest.

On Sunday, Hudson came on to pitch in a blowout against the Dodgers. He faced two batters and struck out two. He threw a 98 mph sinker past Justin Turner, then slipped an 86 mph changeup by Scott Van Slyke. This is a good pitcher. The Diamondbacks have a few hours left to find the team that believes it.

You need to be logged in to comment. Login or Subscribe
jfranco77
Well luckily he can depend on Dave Stewart's excellent decision making capabilities to get him into the best situation.
Reply to jfranco77