Last month, Sam Miller argued in favor of changing the minimum innings qualification for the ERA title from 162 to 130 innings pitched. The reason is that starting pitchers today make fewer starts and pitch fewer innings per start than their counterparts decades ago. In 1969, the first year of divisional play, there were 79 pitchers who qualified for the ERA title, or 3.3 per team. Last year, the number of ERA qualifiers was almost identical, 78, but with 30 teams, the number of qualifiers per team was just 2.6. Sam’s proposal would have given us 3.5 per team.

This being Baseball Prospectus, Sam’s column did not elicit howls of outraged commenters complaining that modern starting pitchers are soft, pitching ever-fewer innings and relying on their bullpen to bail them out. There are two reasons we don’t see much of that here. First, I think most of us agree with Sam when he wrote: 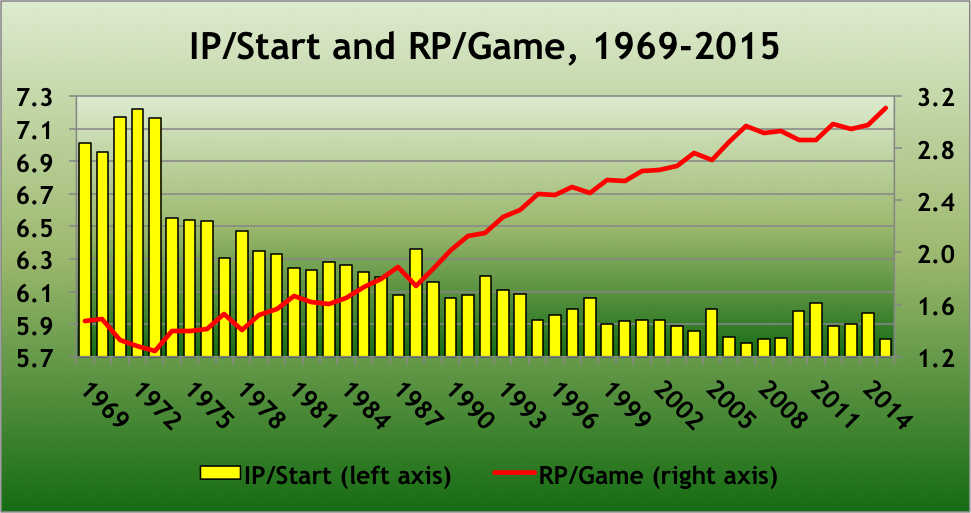 It’s bounced around some, but since 1995, innings pitched per start has hovered in a narrow band, between 5.79 and 6.06 innings per start. That’s a difference of less than an out per game. So to say that starters are pitching less and less just isn’t true; they’ve pitched at the same level for years. During the years since 1995, though, relievers per game have risen from 2.45 to 3.11. That’s a difference of nearly a reliever per game. And that’s per team-game; it means that for every three baseball games in 2015, on average, there were four more relievers appearing than in 1995.

Let me display that more explicitly. Here’s starters’ innings per game and number of relievers per game for just the 1998-2015 30-team era:

See what I mean? If you drew a trendline for starters’ innings, it’d be pretty flat. If you throw out the first year, 1998, it would be virtually flat. The change in pitcher usage has been more relievers, not shorter outings by starters.

Now I’ve been a little disingenuous in this analysis, because I’ve looked at just the years through last year. The reason is that something’s going on this year that’s different. Here’s what it is:

Two things are going on, to be precise. First, starting pitchers are going less deep into games than they ever have. As you can see by the yellow bars, this isn’t a hundredth-of-an-inning technical call. We’ve never seen starters average fewer than five and three-quarters innings per start; they’re on pace to do so this year. Similarly, we’re on pace for the biggest decline in reliever usage since 1988, a year during which runs per game tumbled 12.3 percent, from 4.72 in 1987 to 4.14 in 1988, easing pressure on pitching staffs. By contrast, scoring is up considerably this year.

Ah, but those words on pace. So far in 2016 we’re seeing fewer innings pitched by starters and fewer appearances by relievers, but are those trends likely to continue through the dog days of August, roster expansion in September, pitcher fatigue, and pennant races?

To check, I looked at innings pitched per starter and relievers per game for March-July, August, and September/October for 2011-2015 to see if there’s a pattern. It turns out that there is:

August looks a lot like the prior months, but things change in September. So that downward blip in relief-pitcher usage to date could turn around in the last month of the season, when we can reasonably expect each team to use about 0.5 more relievers per game. But innings pitched per starter? There’s a reasonable chance that the already-record-low level of 5.746 innings per start could fall further given normal September seasonality.

So why are starters going fewer innings? One possibility is that we’re seeing that numbers skewed by some really, really short outings. Edinson Volquez rather famously allowed 12 runs, 11 of them earned, in just one inning of work on June 24, but his was only one of 16 starts so far this year of one or fewer innings. Several of them involve injuries, but most are reflections of ineffectiveness; there are seven Game Scores of 22 or less in that group.

Here’s a graph of the percentage of games in which the starting pitcher goes one or fewer, two or fewer, three or fewer, or four or fewer innings. 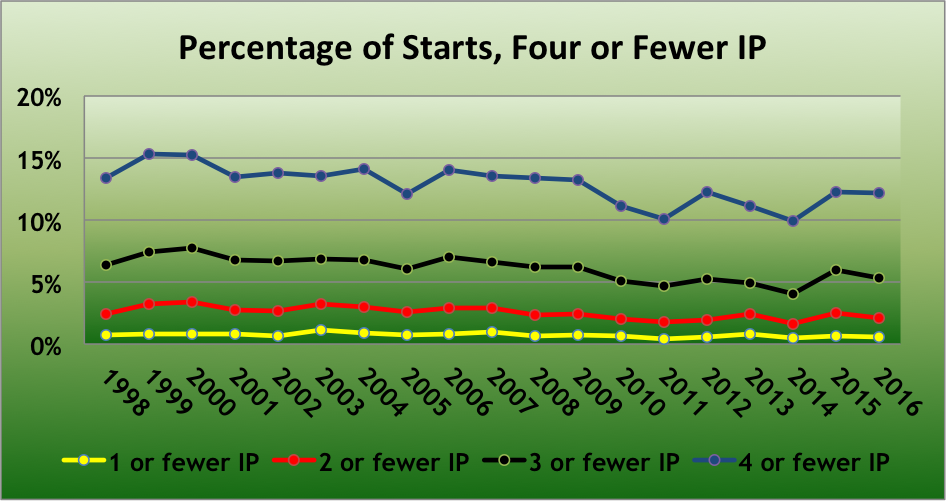 So let’s look at the next tranche, starters with five or fewer, six or fewer, seven or fewer, or eight or fewer innings pitched. 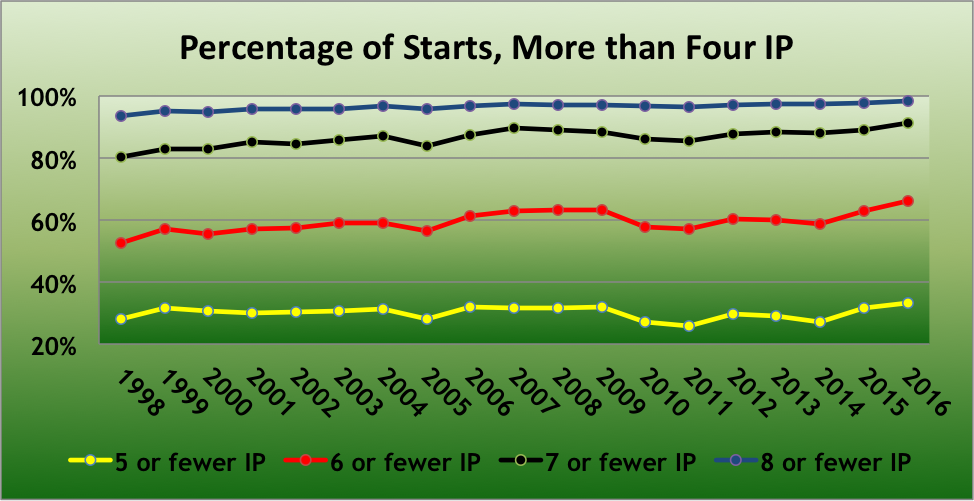 I think we’ve found the issue. Since 1998, there hasn’t been a full season in which 32 percent of all pitcher starts lasted five or fewer innings. This year, we’re on track for almost a third. The prior high for starts of six or fewer innings was 63.4 percent in 2008; we’re pushing two-thirds in 2016. There hasn’t been a year in which 89 percent of starters lasted seven or fewer innings; we’re on track for over 91 percent. Starters are averaging fewer innings pitched because they’re getting pulled prior to starting the sixth, seventh, eighth and ninth innings as never before.

More specifically, look at this: 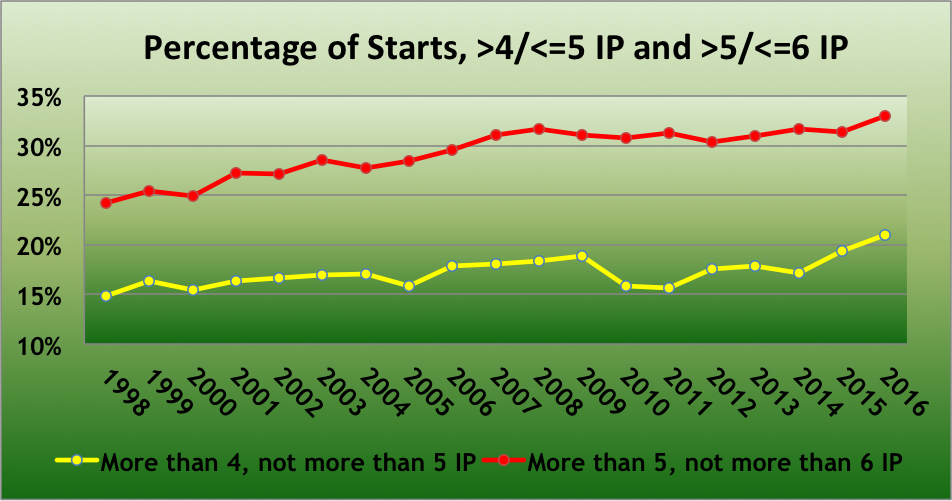 Again, we’re talking about numbers through late July. Things could change over the rest of the season. But, as shown above, given the seasonal pattern of starters leaving games earlier in September—whether call-ups getting their first taste of the majors or postseason-bound starters easing off as the tune up for October—we’re likely to see even shorter average appearances by starters as the season winds down. If nothing else, this adds urgency to Sam’s proposal to reduce the number of innings required to qualify for the ERA title. Because given 2016’s trend to date, starters are going to have a harder time than ever reaching 162 innings.

You need to be logged in to comment. Login or Subscribe
ErikBFlom
You gave us 1969-1973 because they were divisional play. What caused the cliff-like drop in start length? The mound was lowered in 1968, so an adjustment should have happened then if it was cliff-like or have been more gradual.
Reply to ErikBFlom
bhalpern
Maybe the DH in the AL?
Reply to bhalpern
mainsr
bhalpern, per my comment to ChicagoOriole, I need to check my data source on those years, but IIRC, AL starter IP initially rose after the DH was implemented. You had pitchers who used to get pinch-hit for in the seventh inning of a tie game who stayed in the game. I'll verify that.
Reply to mainsr
mainsr
Hey ChicagoOriole, thanks for that comment. There may be a problem with my data for the first five years; looking into it. I'll post something here when I get a resolution. Thanks for noticing that (I should've).
Reply to mainsr
ajbeisheim
The value ranges on these graphs make them so deceptive, start them at 0! A drop of 1/3 of an inning for starters shouldn't look like start length fell off a cliff.

Definitely an interesting topic though!
Reply to ajbeisheim
mainsr
I should've drawn more attention to the scale, fair point. With a, say, 0-8 scale, the last 20 years really would be a pretty flat line. I had to compress the scale in order to point out what's happening this year--a small but significant decline.
Reply to mainsr
penski
Anecdotally, I hear announcers talking about the times-through-the-order penalty more than they used to. I'd be curious to see how the data look for batters faced per start. Are starters being pulled more quickly after facing 18 batters?
Reply to penski
mainsr
Off the top of my head (always a dangerous source), I'd say that's a significant factor. The TTO penalty has seeped into the public discourse. I don't think pitchers are being pulled after two times through but the leash is really short during the third time.
Reply to mainsr
mainsr
OK, ChicagoOriole, you're right--my numbers for 1969-73 were wrong. The correct numbers are:
1969: 6.44 IP/start, 1.60 RP/G
1970: 6.40 IP/start, 1.66 RP/G
1971: 6.64 IP/start, 1.49 RP/G
1972: 6.66 IP/start, 1.45 RP/G
1973: 6.56 IP/start, 1.37 RP/G
1972 was strike-shortened, 1973 was the first DH season.

Sorry for the error. My data source, it turns out, isn't good before 1974. Doesn't change the overall story, of course.
Reply to mainsr