In the playoffs last year, I was obsessed with Luke Gregerson. It wasn’t the usual things that got me, like Gregerson’s trend-bucking track record of health and consistency (for a reliever, anyway) or his near-50 percent slider usage. No, I was obsessed with Gregerson because, with a critical runner standing at third base, he took forever (or, like, 4.2 seconds) to deliver his pitches. He was so slow to the plate that I wondered if Rob Manfred would banish him to the bush leagues on grounds of obstructing reasonable pace of play.

I also wondered why the Royals—who, at one point, had baserunning extraordinaire Jarrod Dyson leading off third—didn’t try to swipe home against Gregerson. Of course, the straight steal of home is mostly a dying art (don’t tell Melvin Upton), and managers would rather their players fail the conventional way than risk a game (or postseason series) on such a rarely deployed gambit.

To their credit, the Royals scored anyway, won the game and ultimately the series, and thusly returned Gregerson to his corner of relative baseball anonymity—at least until he beat out Ken Giles as Houston’s closer this spring.

So what’s Gregerson done for an encore? Well, about what you’d expect. He still throws a bunch of sliders, he’s avoided the disabled list, and both his DRA and cFIP are within shouting distance of his career norms (they’re actually both a tick better). He also got unceremoniously dumped as the Astros’ closer in early June, replaced by a committee of one (Will Harris). What about the real question, though? With a man on third has Gregerson sped up his delivery any or scrapped his wind-up altogether, or is he still inviting the entrepreneurial baserunner to swipe home? We saw, with Jon Lester since 2014, how a nationally televised playoff game can alert the entire league to an exploitable advantage. Perhaps the rest of the league, seeing how far off the base Eric Hosmer was dancing, would force Gregerson to speed up or pay.

Not this time. I timed all of Gregerson’s 2016 deliveries (through Sunday) with a man on third, second and third, or bases loaded, and each time he featured his ultra-slow wind-up. He’s averaged 3.78 seconds per delivery, from the time he starts his wind-up until the ball reaches the plate, with times ranging from 3.44 on the low end to 4.37 on the high end.

Does Gregerson adjust based on the situation at all? I clumsily grouped all of his pitches with a man on third into two buckets based on the likelihood of a potential steal of home actually happening—for the most part, thefts of home aren’t occurring in a four-run game.

Okay, the difference is small—especially considering the sample size and the hand-timed results—but at least Gregerson seems to realize that runners are, indeed, allowed to steal home, and that in certain situations they just might try it. He’s increased his tempo ever-so-slightly in those situations this season, and perhaps more importantly, he’s actually paid some attention to the runner at third. Below are two GIFs, with Gregerson from the 2015 ALDS on the left and Gregerson from a May 11th game from this season against the Indians on the right.

Note how Gregerson checks the runner at third, Carlos Santana, twice in the clip from 2016, once when he starts his wind-up and a second time when he’s halfway through—Santana isn’t paid for his speed but he had just legged out a triple. Against the Royals in the ’15 ALDS, on the other hand, Gregerson doesn’t check the runner at all, and he spends about three-quarters of his wind-up preoccupied with something on the dirt. Further, in 2016, everything is sped up just enough to reduce his overall delivery time by over half a second.

Even this slightly modified version of Gregerson provides a fertile breeding ground for a successful steal of home. He’s got the super-long full wind-up, which we’ve discussed, but he also throws a slider 44 percent of the time. With a right-handed hitter at the plate, that slider is generally going to wind up low and away, drawing the catcher further away from the plate and the path of the (potential) oncoming runner. 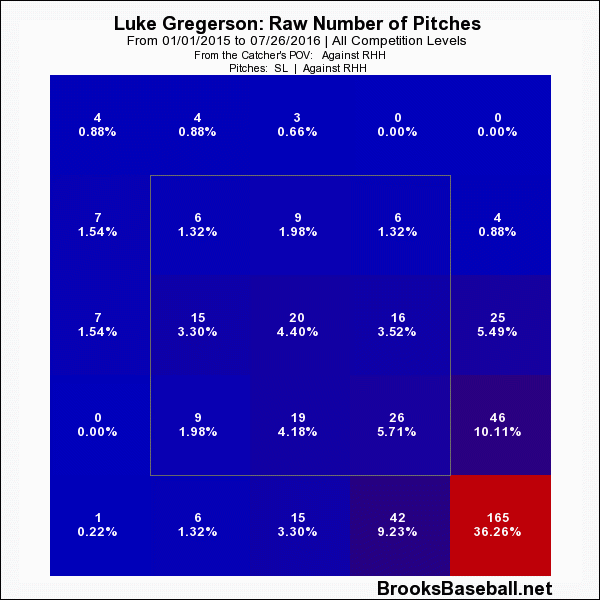 As an added bonus, and primarily thanks to the heavy slider usage, Gregerson bounces about 5 percent of his pitches, which means there’s a better-than-average chance the catcher won’t handle the pitch cleanly anyway. Plus, the Astros are the league’s most shift-happy team, which means there’s a decent chance the third baseman will be positioned further away from the bag than expected, allowing the runner to gain a bigger walking lead. Point is, if you want to steal home against a major-league pitcher, do it against Gregerson.

Relievers like Gregerson don’t really exist. I scoured the MLB highlight logs and found 15 situations from this July where a reliever had a man on third (and no steal of second base possible), and in all 15 of those situations the reliever pitched from the stretch, confirming beliefs that relievers are stretch-throwing animals. They averaged approximately 1.54 seconds to the plate, which is about a tenth of a second faster than Gregeron’s stretch move, but two or two and a half seconds faster than Gregerson from the wind-up.

Dave Anderson, at The New York Times, once wrote about the death of the steal of home, and he quoted then-Mets’ manager Davey Johnson:

When a pitcher throws from the stretch position, there just isn't enough time for even a fast runner to steal home. It takes a fast runner with a good lead off third about 2.5 seconds to get home, but a real slow time on a stretch is 1.8 seconds. It's very difficult for a runner to make it in 1.8 seconds.

Davey Johnson, meet Luke Gregerson. If a fast runner can still make it to home in 2.5 seconds, then Gregerson’s only defense against the steal of home is a mid-delivery speed toggle. Otherwise, even the Carlos Santanas of the world would be easily safe. By the way, that article was published in 1989. Forget a full-blown revival of the steal of home . . . could somebody just challenge Gregerson before the year’s over?

You need to be logged in to comment. Login or Subscribe
LlarryA
Jarrod Dyson. Sam Dyson is a pitcher, and doesn't look like a particularly fast one at that.
Reply to LlarryA
lyricalkiller
Fixed! Abashed! Thanks.
Reply to lyricalkiller