Back in 2004, it seemed like Ichiro could do anything. He hit .372 that year while breaking George Sisler’s 84-year-old single-season hit record, and he was effectively shift-proof before the shift was in vogue. He also stole 36 bases and played a superb right field.

He could do anything except walk, that is. Ichiro drew just 49 free passes in 762 plate appearances in 2004, and even that number was inflated by a league-best 19 intentional walks—try working around a guy who could hit a pitch off the bounce. So he walked just 30 times unintentionally in 2004, good for an unintentional walk rate (UBBr) of just over 4 percent (approximately the combined walk rate of Clayton Kershaw and Madison Bumgarner . . . as hitters).

Ichiro was different and exciting and really good, yet his swing-happy ways kept him a peg away from the league’s elite hitters. He didn’t walk and he didn’t hit for power—even though some would tell you that, if he wanted to, Ichiro could have poked 30 home runs a year in his prime (we’ll leave that debate alone). By the end of the last decade, it was pretty clear that Ichiro wasn’t going to be one of those players to develop patience (or power) late in his career. The year after he set the hit record, he posted a paltry 3.5 UBBr. In 2009, a year after he recorded his best UBBr since his sophomore season in the majors, Ichiro walked unintentionally in just 2.6 percent of his plate appearances—a lower rate than Jeff Francoeur. Major-league pitchers once walked Mario Mendoza more frequently. If you went to the plate 700 times a year without a bat, there’s an outside chance you’d walk more than Ichiro did in 2009.

By 2012 or so, Ichiro’s window to learn how to walk had seemingly passed. By then he was a 38-year-old veteran with 19 full professional seasons under his belt, 12 stateside and seven in Japan. The otherworldly skills he possessed in his earlier years—the hand-eye coordination, the speed, the absurd bat-to-ball contact ability—had mostly deteriorated. If pitchers weren’t going to walk the Ichiro of 2004, they sure as heck weren’t going to walk the Ichiro of 2014. But . . . they did.

Ichiro’s UBBr in 2014 crept within a half percentage point of his career best. Call it a blip, but in 2015—a year in which he posted a career-worst .218 TAv—Ichiro’s unintentional walk rate reached a new career-high of 6.9 percent. Shoot, let’s just get right to the good part: 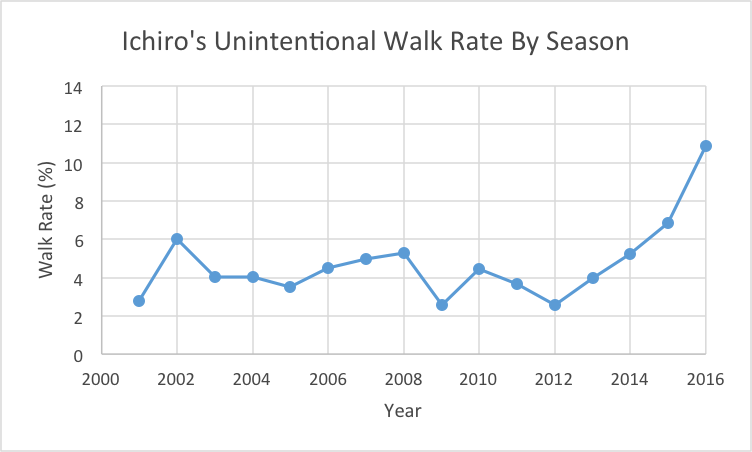 So far this year, Ichiro—the man who once refused to walk his way out of Kerry Park—is walking more than Miguel Cabrera, Andrew McCutchen, and Freddie Freeman. He’s walking as much as Rougned Odor, Kevin Pillar, Matt Kemp, and Alcides Escobar . . . combined. Take away the intentional walks and Ichiro is walking as much as David Ortiz. David Ortiz! How does a 42-year-old player with a long track record of not walking suddenly start drawing free passes at a well above average rate?

The easy answer is that he’s simply swinging the bat less frequently, and our plate discipline stats confirm that is indeed true. Ichiro’s swinging at just 41 percent of the pitches he’s seen this year, which is the lowest mark of his career and six percentage points off his career average (the numbers only go back to 2008). 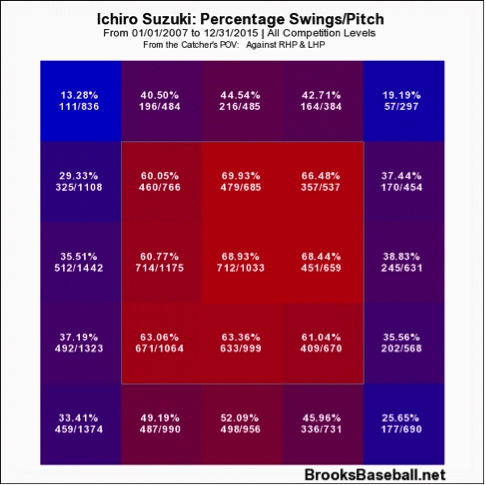 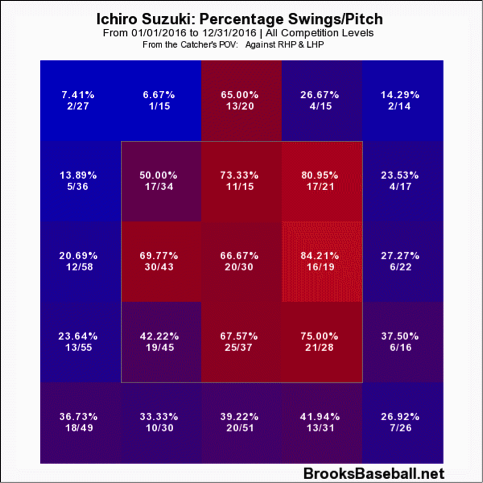 Ichiro is actually swinging at his pitches—everything on the inner-half of the strike zone—more often than he ever has. What he’s been able to simultaneously do, remarkably, is cut down his swing rate on everything else.

A hitter isn’t supposed to be able to make this kind of adjustment—not at 42 years old, anyway, when everything from hand-eye coordination to bat speed to pitch recognition should be in sharp decline. It’s as if Ichiro decided to flip a switch and change his entire plate approach, and it’s working. Not only is he walking more, but he’s hitting everything. He’s batting .335 with a couple mph added to his average exit velocity, he’s striking out at nearly a career-low clip, and his BABiP is back in line with his peak years. Ichiro’s turning back the clock and mastering a new skill.

The plan was to find multiple pairs of pitches, but it turns out that it’s more challenging than expected to find similarities between location, pitch type, count, and pitcher handedness, especially when we’re dealing with a limited sample this year.

Take a closer look at the two clips above, though. Notice Ichiro starts his front leg kick later on the pitch from this year. 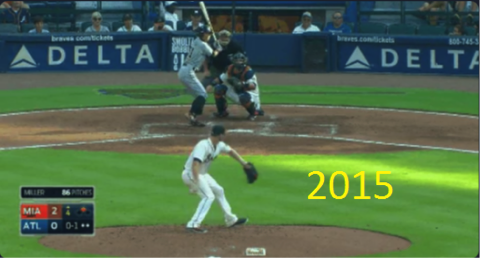 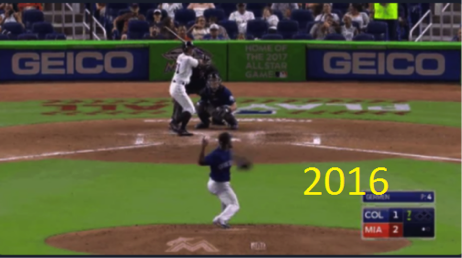 It’s a very slight change and there’s a decent—okay, good—chance it has nothing to do with anything, but it does seem to keep Ichiro more balanced throughout his swing. Maybe it’s helping him stay back and not get too anxious. Maybe.

But is it a consistent change? Often times small mechanical adjustments aren’t really adjustments at all; instead they’re simply the residue of trying to repeat a complicated motion over and over. Inevitably things can get a little out of whack. I viewed a number of other Ichiro at-bats, both from this season and from 2014 and 2015. It seems the change is, indeed, somewhat consistent. 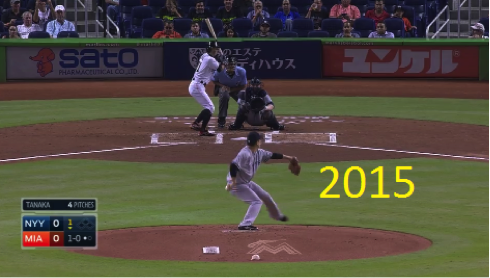 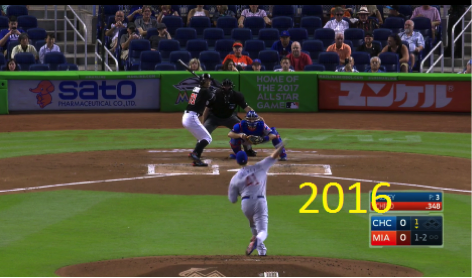 There are pitches from 2014-’15 where Ichiro will start his leg kick later and pitches from 2016 where he’ll start it earlier, but for the most part it appears that he’s gone to the late-starting leg kick more frequently in 2016. Above, Ichiro waits until John Lackey nearly delivers his pitch before starting his leg kick (right image). Below, the comparison is a bit closer, but the leg kick still starts later in 2016. 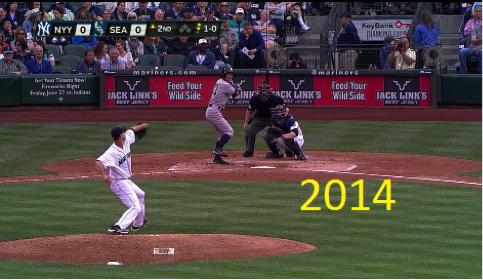 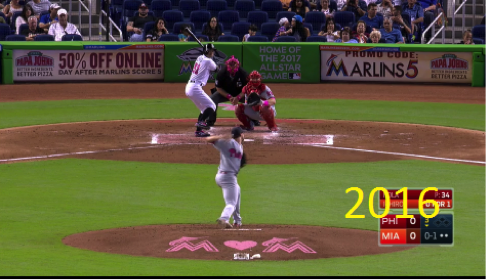 It’s hard enough to conclude whether or not the change is real let alone what kind of effect it would have on Ichiro’s ability to induce more walks. The things we know: he’s swinging less often, he’s making more contact, and he’s drawing significantly more walks in 2016. Despite our above foray into the nebulous field of barely perceptible mechanical adjustments, we don’t know why, exactly, he’s doing those things.

We like to think that, in today’s era, every baseball equation is solvable, that the answer to each question lies somewhere in the PITCHf/x and Statcast data files, or in the advanced statistics, or in the video archives. Someone’s suddenly hitting more home runs? Sure, he’s forcing pitchers to go inside on him while increasing his exit velocity and launch angle on batted balls. A wild pitcher has finally started throwing strikes? He’s getting ahead with fastballs while narrowing the volatility on his release point. An older player is drawing walks after a career of hyper-aggressive hitting? He’s swinging the bat less often while, um, shortening his leg kick.

Sometimes, though, the answers to our questions are best left undefined. Ichiro is walking more, but we can’t quite explain how it’s happening. It’s not supposed to be happening—not at his age, not with his career numbers in front of us. That’s okay. In the end, perhaps it’s better to simply enjoy the wizardry and forget about finding a clean answer. Ichiro’s chasing 3,000 major-league hits on a mediocre team, inching ever closer to retirement with each plate appearance. And now he’s learning how to walk. I’m waving the white flag.

Maybe next year, for an encore, he’ll hit 20 home runs. At this point it’s hard to put anything past him.