Francisco Liriano has been a Pittsburgh Pirates success story. Signed as a free agent for $1 million after compiling a 5.34 ERA, 4.29 FIP, and 4.02 DRA in 156 2/3 innings split between the Twins and White Sox in 2012, he became a hero in Travis Sawchik’s book about the 2013 Pirates and their embrace of analytics, Big Data Baseball. In Liriano’s case, the approach was to junk his four-seam fastball, focus on his sinking two-seam fastball, and generate a lot of groundballs for shifted Pirates infielders to gobble up. The success of this strategy was evident through last year:

He parlayed his success into a three-year, $39 million contract signed before the 2015 season. It looked like a pretty good signing last year. This year, though, he’s hit a wall. He has a 5.34 ERA, 5.45 FIP, 117 cFIP, and 5.56 DRA entering play on July 8. Among National League pitchers with at least 80 innings pitched, he had the fourth-highest ERA, fourth-highest FIP, fifth-highest cFIP, and second-highest DRA. His groundball rate is down, to 51 percent, though that’s still the 17th highest in the league. So what’s going wrong?

Let’s look at the two most logical places to start: Repertoire and velocity. Here’s a list, courtesy of Brooks Baseball, of what Liriano’s thrown as a Pirate:

He’s throwing his two-seamer more than ever before, but I wouldn’t characterize anything there as a radical change. How about velocity:

I could dig through Brooks to get you charts showing movement and location, but I think the answer’s simpler. Here’s a simple table showing Liriano’s Zone Rate (the percentage of his pitches that are in the strike zone) and O-Swing Rate (the percentage of pitches outside the strike zone on which batters have swung). Rank is where Liriano stood among all major-league pitchers (minimum 2,000 pitches 2013-15, 1,000 in 2016) for lowest Zone Rate and highest O-Swing Rate.

See what’s happening? Liriano’s plan has been to get batters to chase on pitches outside the strike zone, hoping for either a whiff or weak contact. From 2013 to 2015, the plan worked: He consistently induced swings on pitches outside the zone. This year, though, opposing batters have been laying off those pitches. That’s had two effects. First, his strikeout rate and walk rates have gone in opposite directions. In 2013 to 2015, Liriano struck out 25.5 percent of the batters he faced while walking 10.0 percent. This year, when he’s not getting swings on pitches outside the zone, his strikeout rate has fallen to 21.0 percent and his walk rate has risen to 13.6 percent. Second, as he’s fallen behind on the count more, he’s been forced to come into the zone more, where he’s gotten tattooed. Batters are hitting .283/.528/.481 when they’re ahead in the count against Liriano this year, not all that different from last year’s .335/.502/.516. The difference is that 40.5 percent of plate appearances against Liriano have ended with batters ahead in the count this year compared to 37.1 percent last year.

Now, I’ve spent 500 words telling you that Francisco Liriano’s having a bad year in large part because batters aren’t chasing pitches outside the strike zone. That’s interesting, but it’s not really my point. It’s not even very original, as August Fagerstrom discussed it in May.

But here’s my point: It’s not just Liriano. 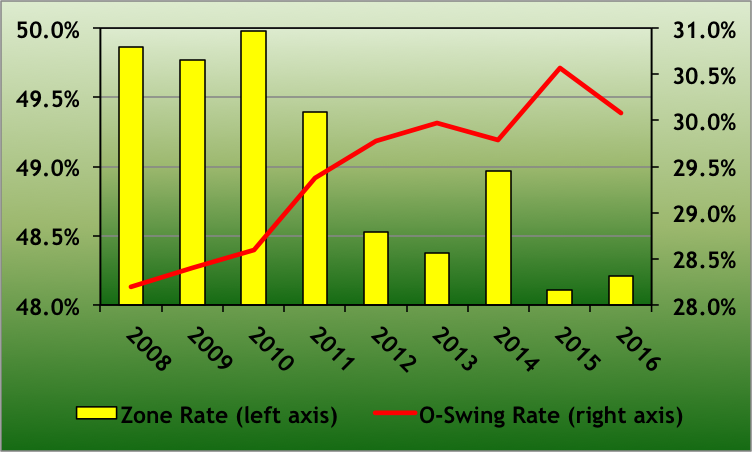 For every 200 pitches outside the strike zone, batters are swinging one fewer time so far this year. Granted, that’s not an enormous difference. But it’s a difference. There has been a fairly steady increase in swings outside the zone every year since 2008. This year could be an inflection point.

The pitchers most affected by this are guys like Liriano, who don’t pitch much in the zone. Here are the 15 pitchers (minimum 2,000 pitches) with the lowest Zone Rate in 2015 who have at least 50 innings pitched in 2016 (Parental Advisory):

That’s 15 pitchers, of whom only five have reduced their ERA and four their DRA and cFIP. Those tallies drop by one each if we exclude the 15th pitcher, Sabathia, in which case the averages rise to a 0.85 increase in ERA, 0.71 increase in DRA, and 10 increase in cFIP. There are, of course, a number of reasons why a pitcher’s performance changes year to year, but a reluctance of batters to chase pitches outside the zone certainly seems to be a factor for the group above.

Team statistics are a little trickier because of personnel changes. When comparing Liriano 2015 to Liriano 2016, we’re looking at the same guy. When comparing his team, the Pirates, from 2015 to 2016, we’re comparing a club with only two holdovers (Liriano and Locke) from the five-man rotation. So these figures are a little less persuasive, but still worthwhile. Here are the 10 teams with the lowest Zone Rate in 2015, and how they’ve done this year:

As I said, these data are less persuasive. DRA and cFIP don’t suggest that there is, in aggregate, a big disadvantage for teams that had a low Zone Rate in 2015. Seven of the teams on this list are among the 10 with the lowest Zone Rate in 2016 as well (all but the White Sox, Rangers, and Mariners), and if we look only at the holdovers, the averages rise a little: a 0.47 increase in ERA and a 0.07 increase in DRA. Every one of the seven has a higher ERA in 2016 in 2015, but major-league ERAs are 4.23 so far this season compared to 3.96 this year, so that’s not all that telling.

But the team at the top of the list is illustrative. The Pirates have been a disappointment this year, largely because they’ve gone from allowing the third fewest runs in the National League last season, 3.68, to the seventh most this year, 4.65, almost a full run per game more. Part of the problem’s been the aforementioned starting rotation, raising probably unrealistic hopes of salvation from the minors. But on a larger level, the Pirates as a team, like Francisco Liriano as an individual, have placed an outsized reliance on a strategy of inducing weak contact on swings outside the zone. During the Big Data Baseball era, it largely worked. In 2012, the last year of the Pirates’s 20-year streak of losing seasons, the team had the highest Zone Rate in the National League. Then, from 2013 to 2015, the Pirates had a Zone Rate of 45.8 percent, the lowest in the majors, and a chase rate of 32.0 percent, the highest in the majors. This year, their 46.7 percent Zone Rate is only fifth lowest and they’ve tumbled all the way to 13th in chase rate, 30.5 percent. The two are linked, of course; pitches outside the zone that aren’t chased are balls, creating hitters’ counts that force the pitcher to throw strikes. Pirate pitchers’ strikeout rate, 20.7 percent in 2013-15, has dropped to 18.2 percent this year, while the walk rate, which was 7.9 percent from 2013 to 2015, has risen to 9.0 percent. People have wondered whether pitcher whisperer Ray Searage has lost his magic. It’s more like The Masked Magician revealed Searage’s secret, and the reveal consists of two words: Don’t swing.

The moral? Batters are swinging less at pitches outside the zone. This has most adversely affected pitchers, and teams, whose game is centered on getting batters to chase. For pitchers like Liriano, who’s already reinvented himself once, another reinvention may be in order.

You need to be logged in to comment. Login or Subscribe
leites
Fascinating - thanks!
Reply to leites
mainsr
Thanks for reading it!
Reply to mainsr
Pirata21
The reason why batters are not swinging at pitches out of the zone on Lirano, is his inability to throw strikes. Lirano (58 BB in 92inn) leads the league in walks and the Pirates are in the top 5 in the NL for walks allowed. Reds, Padres, Dbacks, Marlins and Pirates. If teams are reluctant to swing at any of his offerings then they are less likely to chase pitches out of the zone.

Reply to Pirata21
mainsr
But Pirata21, he's never thrown strikes as a Pirate. As the fourth table shows, he had the second-lowest rate of pitches in the strike zone in 2013 and the lowest in 2014-16. This year he's actually throwing more in the zone than in the other three years. Until this year, he could count on batters chasing. Now they're not, and you're right, it's resulting in a mountain of walks. And it's writ large for the team as a whole.
Reply to mainsr
Oleoay
Perhaps weak contact out of the zone was more likely to hit be pulled into a shift? Perhaps hitters are adjusting to that by just taking those pitches the other way instead of trying to pull?
Reply to Oleoay
mainsr
Hey Richard, good hearing from you! In Liriano's case, at least, it's not that they're going the other way on the out-of-zone pitches as much as they're just not swinging at them at all. That 5%-plus reduction in his O-Swing rate is, IIRC, the steepest in the majors.
Reply to mainsr
Oleoay
Hi again Rob :) (And hope to see you at Saber Seminar)