As of the morning of July 4th, every team had played at least 81 games. So we’re officially halfway through the season. It’s easy to make extrapolations based on that—I can multiply by two in my head!—but a lot of them are silly. Any stretch of games is going to be a mix of hot and cold, healthy and hurt, lucky and unlucky. And some players have had more of one than the other so far. So yes, it’s possible that Mark Trumbo, who had 24 home runs through the Orioles’ first 81 games, will hit 48 this year. And Edwin Encarnacion could finish the year with 140 RBI, and Jeurys Familia might have 56 saves, and Max Scherzer has a shot at 296 whiffs. All of those figures are double the player’s total at the 81-game mark. For that matter, Jake Lamb could finish with a .592 slugging percentage, and David Ortiz with a 1.110 OPS, just as Andrew McCutchen might bat .239, and both Matt Harvey and Chris Archer could lose 20 games. But you don’t count on that, right? A player who’s been unusually good or bad for the part of the season probably regresses in the second half. Probably.

The same is true of teams. We’ve already seen that with the Cubs, who’ve fallen off the 116-win pace they had earlier in the season. The Rangers are a fine club, but do they really seem likely to win 104, double their 81-game win total of 52? For that matter, does it seem likely that the Twins and the Braves and the Reds will all lose 100-plus? Again, probably not.

But league-wide trends…they could hold. Across 30 teams, hot and cold, healthy and hurt, lucky and unlucky are more likely to even out. Call it the law of large numbers, call it minimized variance over large samples, call it whatever, the characteristics of the last 1,215 games of the season aren’t going to be a lot different from those of the first 1,215. Yes, there are different players, and the players’ contributions will vary, but there won’t be sharp variations. Through June 30, 2014, the season was 50.9 percent done. Up to that point, there were 7.73 strikeouts per nine innings. There were 7.72 thereafter. There were 3.01 walks and 0.89 homers per nine innings through June 30, 2014. They dropped, just a little, to 2.76 walks and 0.83 homers after that. As a result, the ERA was a touch lower, 3.79 through June 30 and 3.69 afterwards. None of those differences is large.

That’s pretty normal. Thirty teams playing 81 games give you a robust sample size, and one that’s not likely to spike one way or the other over the second half. But, as BP alums Rob Arthur and Ben Lindbergh pointed out in March, homers rose in the second half of 2015, a lot:

A friend recently remarked that there seem to have been a lot of hitters with multiple homer games this year. I checked, and through the end of June, there had been 165 multi-homer games, through 2,370 games played. (Note: Unless noted otherwise, all references to games will be to team games, e.g., Detroit playing Kansas City is two team games.) That works out to a multi-homer game in 6.96 percent of games played. That’s a lot—below only 1999 (7.45 percent of games played), 2001 (7.02 percent), and 1996 (6.99 percent) since divisional play started in 1969.

But that’s just percentages. In terms of raw numbers, through June 30, there were 340 homers hit in those 165 multi-homer games (155 with two homers, 10 with three) among 2,717 home runs in total. What does that portend for the full season?

This isn’t a case of “just multiply by two.”As the chart below illustrates, there are some months that are better for home runs—largely because of weather—than others. (April includes March games, and October includes September games.) 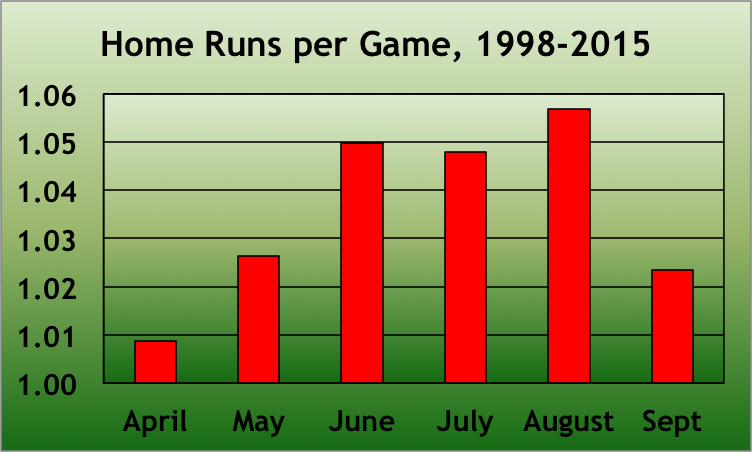 Let me anticipate the objections. Those rates are averages, and there’s variance. In 2013, for example, the rate of home runs per game in July-August was 9.1 percent lower than in April-June. It was 7.4 percent lower in 2014. So if 2016 follows the pattern of 2013-14 rather than 2011 and 2015 (12 percent higher in both years), we won’t see any records being challenged. Further, to do a more complete analysis, I should probably be looking at where the remaining games will be played, to see how many will be in home run-friendly parks. And long-term weather patterns will have an impact, but nobody knows how to predict them. That’s all okay. Predictions like this always have broad error bars. I’m just saying that going by the home run patterns of the past 18 years, the 2016 home run pace—already the second-highest of all time—doesn’t look like a fluke.

Two conclusions. First, Rob and Ben were right last year. The rise in home runs at the end of 2015 was a harbinger. It may diminish, but through June 30th, at least, the near-record home run pace at the end of 2015 has continued in 2016. Second, regarding multi-homer games—which sent me on this trail in the first place—using the same math as above yields a projection of 340 multi-homer games, just behind 2001’s 341 and short of the all-time record of 362 in 1999. So while we’re not on a record pace at the halfway mark, we’re seeing home runs at a rate not seen in 15 years (and, before that era, ever).

[1] Those are means differences over the 18 seasons, 1998-2015. I didn’t sum all homers and all games over all seasons, because doing so would give extra weight to seasons with more games. That’s not what I wanted. I wanted the average annual ratio, weighting all seasons equally.

You need to be logged in to comment. Login or Subscribe
a-nathan
I commented on Ben/Rob's 538 article just after it came out and wrote up a brief article for my web site: https://t.co/4DNVkX9pNJ. I concluded that the increase in HR/contact was completely consistent with a small (~1 mph) increase in average exit speed. I have been meaning to extend the analysis into the 2016 season but haven't completed it yet.
Reply to a-nathan
mainsr
Thanks Alan. To what would you attribute the higher exit velocity--batter or ball?
Reply to mainsr