It’s been a rough few days for some of the National League’s frontline starters, beginning with a weekend that saw both Clayton Kershaw and Madison Bumgarner suffer rare defeats. Jake Arrieta might’ve followed in their losing footsteps Monday. But Kris Bryant wouldn’t let him.

In the first inning, Bryant roped an RBI double and took third on the throw home,

part of a two-run rally in which he then scored on Miguel Montero’s sacrifice fly. Arrieta gave those two back in the home half of the first, so in his next at-bat, Bryant got him one more:

By the top of the fourth, that edge was gone, too. But Arrieta tried to support his own cause with a single, and Bryant made sure that effort wouldn’t go unrequited either:

His second homer of the game, a three-run job, made it 7-3 Cubs. And yet, even those runs wouldn’t decide this one. Neither would this:

The pitcher’s solo shot helped cover up his shoddy work on the bump, where he stuffed the box score with fives and fours. Five innings, four hits, five walks, four strikeouts—and, worst of all, five runs, all of them earned. Whatever the “easy fix” for his recent scuffles is, Arrieta didn’t find it Monday. So it’s a good thing he found his power stroke.

And an even better thing that Bryant is on his team. With the score 8-5 in the top of the sixth, Bryant led off the frame with a double but was stranded at third. Undeterred, he drove himself in again two innings later:

It was that solo shot, the first in a back-to-back set with Anthony Rizzo, that accounted for the decisive tally in the 11-8 barnburner at Great American Ball Park.

For Bryant, it capped a historic night: 5-for-5 with three homers and two doubles. He’s the youngest Cub ever to leave the yard thrice in one day. He’s the new Cubs record-holder for total bases in a game with 16. And he’s the first player on any team to pack a trio of jacks and a couple of two-baggers into one box score since at least 1913.

Noah Syndergaard didn’t have Kris Bryant on his side Monday. What he reportedly did have, as we learned after the fact, is a bone spur. And that might explain why Thor didn’t have Thor’s typical command in the series opener against the Nationals.

After a visit to Dr. David Altchek after his last start turned out to be a false alarm, Syndergaard took the mound Monday bumping 100 with his fastball and the low-90s with his slider. In other words, from a velocity standpoint, Thor seemed to be Thor.

What wasn’t so Thor-like were the back-to-back walks Syndergaard issued in the first inning, matching his season high for a start. And while Syndergaard came out of that bases-loaded, no-out jam unscathed, he wouldn’t be so fortunate in the third.

That frame began much like the first, with a single by Ben Revere, a stolen base by Revere, and subsequently, a walk drawn by Jayson Werth. But this time, instead of walking, Bryce Harper singled, scoring Revere and moving Werth to third. Three more singles, two more steals, and a wild pitch later, the Nats had erased a 4-0 deficit and gone up 5-4.

While Arrieta packed the box with fours and fives, Syndergaard loaded up on threes and fives. Three innings, five runs, three walks, five strikeouts, and—to top it off—five stolen bases, running his total allowed for the season to a league-leading 28. The latter part of his game was Thor-like, actually, as the right-hander has struggled more than any other starter in baseball to control the opposition’s baserunners. It’s just that he’s typically excellent at limiting them all together.

On Monday, he wasn’t, and there were plenty of signs that, despite Altchek giving Syndergaard’s elbow a clean bill of health, something was amiss.

was evident from the get-go, and by the end of his short night, there were far more meaty heaters and easy takes than triple-digit paint on the corners. Then there’s the velocity chart,

which is more troubling upon closer examination than at a glance. The valleys here are at least as notable as the peaks, because while Syndergaard’s fastball lit up 99s on the gun deep into his night, the speed of his breaking balls varied a bit more than usual, with the slider dipping into the high-80s, and he ran out of steam amid a 35-pitch third.

For his part, Syndergaard denied that a barking elbow was behind his rough outing and refuted the notion that he, like teammate Steven Matz, is dealing with a bone spur:

Syndergaard denies he has a bone spur. #Mets

It’s clear, though, that something wasn’t right with the Mets ace Monday, when the Nationals took advantage of his wandering command to take their second straight after a seven-game skid with an 11-4 romp. And if, contrary to reports, the issue is mechanical and not medical, he’s got four days to sort it out before Bryant and the Cubs put that to the test.

Here’s something you don't often see:

That’s a chart of the 75 pitches Eduardo Rodriguez threw yesterday. And it doesn’t contain a single one that might be described as “over but low.” Even pitchers who live up in the zone go below the knees from time to time, if only to change sightlines. But Rodriguez isn’t that sort of pitcher. He likes getting batters to chase down: 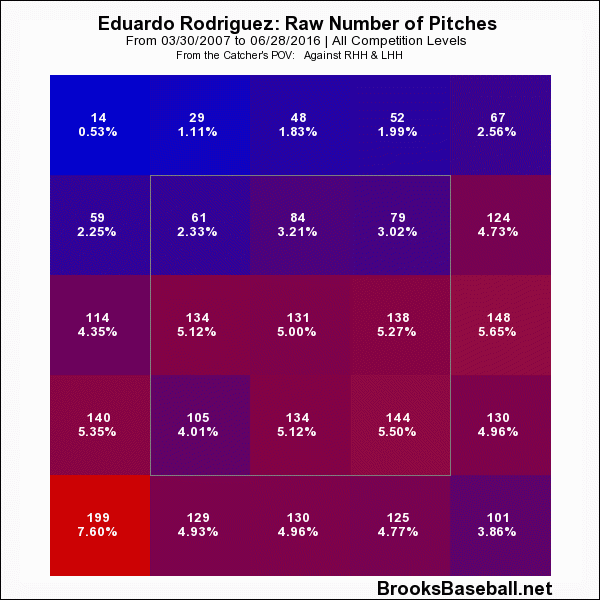 On Monday, that wasn’t happening. What was happening was a pounding: 11 hits, five of them for extra bases, in 2 2/3 innings. John Farrell stuck with Rodriguez through a five-run first, but spared him further indignity after Logan Forsythe’s two-run blast landed beyond the stands in the third:

The Red Sox offense came to play, scoring seven times, four of them in 5 1/3 shaky innings for rookie southpaw Blake Snell. But the 9-0 hole Rodriguez dug was far too deep, and Boston fell to Tampa Bay, 13-7.

Before yesterday, it had been about 21 months since a left-handed batter last drove an Andrew Miller fastball over the fence. The last man to do it was Brian McCann, back when Miller was with the Orioles. Now, Miller’s a Yankee, and McCann was in the squat catching him when Rougned Odor put an end to that drought:

Miller missed McCann’s outside-corner target badly, leaving the 96-mph offering up and in, and Odor clobbered it into the right-field stands.

That dinger infused some additional drama into the late stages of a game that was delayed by rain before first pitch and again in the ninth. An erratic Aroldis Chapman entered with the score at 6-5 and imperiled that lead by walking Robinson Chirinos and falling behind Shin-Soo Choo 3-1 to start the frame. That’s when the umpires deemed the conditions in the Bronx too wet for the game to continue. 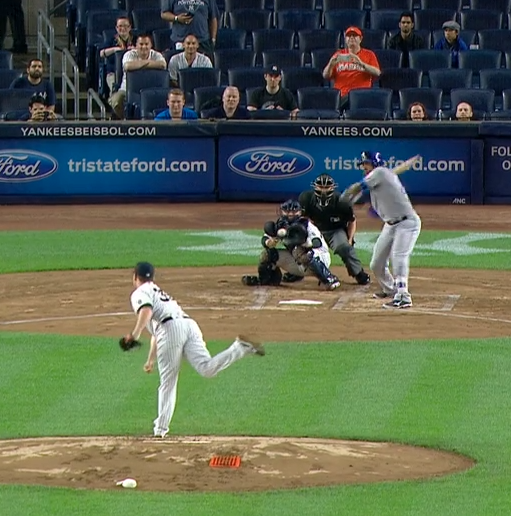 In lieu of Chapman, Joe Girardi called upon Kirby Yates to try to finish off the Rangers. And Yates started off well, coming back to strike out Choo. But then he hit Ian Desmond. And then he hit Nomar Mazara. And so a couple of two-strike counts turned into a bases-loaded, one-out mess.

Adrian Beltre plated a pair with a single, flipping the one-run deficit into a one-run edge. Then Yates reloaded the bases by plunking Prince Fielder, and two batters later, Elvis Andrus singled in two more. So, Yates blew the chance to collect his second career save, and along the way he became the second Yankees reliever since at least 1913 to bean three batters while recording three or fewer outs.

Sam Dyson pitched through traffic in the last of the ninth, allowing two at-bats with the tying run at the plate, but he successfully wrapped up the 9-6 win at 2:45 a.m.

Unfortunately, Andrelton Andreltonning isn’t such good news at the plate, where Simmons, batting .226/.258/.284, found himself with the bases loaded and one out in the ninth inning of a 4-2 game. There, Simmons hit a comebacker to Astros closer Will Harris, who went to home for one, and on to first for the game-sealing, 1-2-3 double play.

The moment Nationals fans have long awaited has arrived: Lucas Giolito is coming up from the minors, and his major-league debut will come in a high-stakes contest. Washington will send its top pitching prospect to the hill in the middle match of a three-game series against the Mets, who’ll hand the ball to Matt Harvey in Giolito’s first assignment. The right-hander, who turns 22 on July 14th, leaves a 3.17 ERA and 72-to-34 K:BB ratio in 71 innings behind at Double-A Harrisburg. For more on his minor-league accomplishments, scouting traits, and potential fantasy impact, be sure to check out our Call-Up post from Jarrett Seidler and J.P. Breen.

New York was six back of Washington just nine days ago, but the first-place Nats have since sputtered, with the gap between the clubs now at four after the home team took the series opener. They’ll look to Giolito to clinch a series win (7:05 p.m. ET).

It’s no secret that James Shields has struggled mightily since getting traded from the Padres to the White Sox. Quietly, though, Erik Johnson, who went to San Diego in that barter, hasn’t been much better.

The 26-year-old Johnson has toed the rubber thrice for Andy Green’s club, and he’s served up 25 hits including seven homers in just 14 2/3 innings. Now, to be fair, Johnson had the extreme misfortune of coming to the Friars just in time to make his team debut at Coors Field. And, as if that weren’t enough, two starts later he was thrown into the fire at Camden Yards, against the power-laden Orioles. But, no matter how treacherous the circumstances, seven long flies in 14 2/3 won’t cut it.

To make matters worse, though, those seven home runs came on the heels of the five that Johnson watched soar in 11 2/3 innings with the White Sox back in May. Add those into the equation, and Johnson has given up a dozen dingers in 26 1/3 frames. And he’s spread them out, too, so that each of his five outings has contained at least a pair.

As such, Johnson already holds the record for the most two-plus-gopherball starts to begin a season, having broken it his last time out. He is, however, one shy of the overall mark of six, presently owned by Jason Jennings and Brian Kingman, who’d gladly take a little more company in that particular shame closet. And there’s no better opponent to deliver it than the one coming to Petco Park this evening: the Orioles, who lead the majors with 117 team home runs.

Tune in to see if the Birds can push Johnson into a tie with Jennings and Kingman as he duels Ubaldo Jimenez in game one of a quick two-gamer tonight (10:10 p.m. ET).

You need to be logged in to comment. Login or Subscribe
FlemSnopes
Actually, the Nats are 4.0 games ahead of the Mets. The 3.5 game lead is over the second place Marlins.
Reply to FlemSnopes
statsrath
Fixed, thanks.
Reply to statsrath
newsense
"the Nationals took advantage of his wandering command to snap a seven-game skid"

Sorry, the losing streak ended on Sunday when they beat the Brewers.

"New York was six back of Washington just nine days ago, but the first-place Nats have since sputtered, with the gap now at 3 1/2 after the home team took the series opener"

No, the Mets are 4 back. The Marlins are 3.5 back.
Reply to newsense
statsrath
Fixed, thanks.
Reply to statsrath