One could make the argument that, nearing the halfway mark of the 2016 season, there are only two major (positive) surprise teams in baseball: the Texas Rangers and the Baltimore Orioles. The Rangers aren’t even that surprising; they’re having the kind of breakout season that makes the skepticism difficult to remember. The team is sequencing its runs like a crooked dealer, their touted young players like Nomar Mazara and Jurickson Profar are ready ahead of schedule, and the pitching staff … okay, the pitching staff still doesn’t make any sense. But it wasn’t hard to conceive of a good Texas Rangers team, even if many experts chose not to.

Not so the Orioles. After leaping out of the gate with a seven-game winning streak, the club has since held at an 87-win pace, and enjoys one of the best records in baseball. Despite PECOTA treating them as a sub-.500 team going forward, their banked victories still give them a coin flip’s toss at the playoffs. Real or fake, they can’t be dismissed.

Which is all too easy to do, given that the Orioles are baseball’s most absurd present dynasty. After playing Thug #2 to New York and Boston for more than a decade, Baltimore hasn’t had a losing record since 2011, one of only four teams in baseball to hold such a distinction. Yet few have been impressed. The Orioles were the only team in the AL East that no BP author predicted to win the division, banished by most to the cellar. PECOTA assigned them the worst record in the American League. Their offseason victories mainly centered around overpaying for their own free agent-eligible players, and their top prospect graduated only because he would literally have been able to leave the team if they hadn’t promoted him.

So how do the Orioles find themselves here? Here’s a breakdown of this year’s major producers, categorized by their 2016 performance against their PECOTA percentile projections: 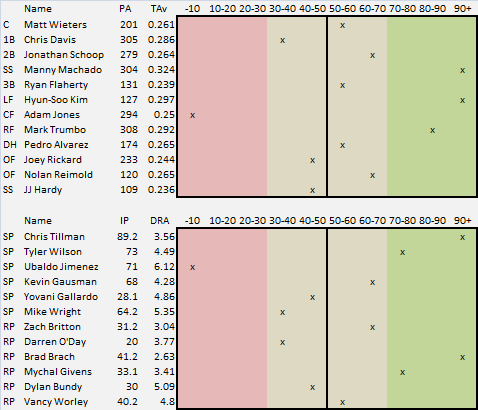 The team has only had two massive disappointments, which happen to be two of their most highly-paid players. Meanwhile, they’ve had seven players dramatically exceed expectations, and two of those (Manny Machado and Hyun-Soo Kim) so wildly that they nearly break the scale. This doesn’t mean that the team is flawless; Mike Wright isn’t a huge disappointment in terms of predictions, because he’s been just slightly worse than the terrible output PECOTA expected of him. There are still plenty of holes on the roster.

But this is true of many contenders: Witness the rotations of Boston, or Texas, or just about every other team in baseball. You can point to the players in green and declare regression, just as you could point to the spots currently held by Ubaldo Jimenez and Yovani Gallardo and declare that there’s a low bar for making improvements. The discussion over whether the Orioles can continue to win is less interesting than the question of why everyone assumes they can’t. What makes this particular team, having just witnessed the 2015 Rangers and Yankees, so difficult to believe in?

The answer could lie in our own bias as professional and amateur analysts, and our desire for narrative, even inside the numbers. It’s not that the Orioles are bad, necessarily: It’s that they don’t make sense.

The distinctive characteristic of team-building in the modern era of baseball is its strategy: The advantage, the loophole, the grand plan that gives a team an advantage over all others. The examples are well worn by now, but we still think of teams in terms of the edges they seek. Moneyball is cliche, but we still have the Dodgers’ health research, Pittsburgh’s pitching philosophy, and the Rangers' international scouting.

As Jonathan Bernhardt detailed in his essay for the 2016 BP Annual, Baltimore lacks any such identity. They don’t draft particularly well, or develop the players they draft. They’re willing to spend, but they can’t rival Boston or Los Angeles. Their president is an old hand, and their owner is meddlesome to the point of self-destruction. They don’t do any one thing, in other words, that a fan or an analyst can pick out and say, “This is the logic. This is why this team wins.”

Their one virtue is their ability to bid; historically, by waiting out the market, they’ve been able to capitalize on some value at the end of free agency, scooping up Nelson Cruz in 2014 for a mere $8 million. But even that strategy fell through this offseason, as the Orioles signed and then unsigned Dexter Fowler for what would have been the bargain of the offseason, and failed to capitalize (along with 28 other teams) on the unwanted Ian Desmond, a seemingly natural Orioles target. Their decision to replace the steadying force of Wei-Yen Chen with questionable in-house options and a bargain-bin Yovani Gallardo appears, to this point, unfortunate.

And yet despite those missed opportunities, and a truly disastrous rotation outside of Chris Tillman and Kevin Gausman, they’ve succeeded, perhaps because they’ve made chaos their strength. The Orioles have again thwarted narrative by putting their resources into high-variance players–like Chris Davis, Tillman and Jimenez–who can go a week or a month or even a year looking lost before becoming engulfed in flames. They give money and time to guys like Lew Ford and Bud Norris and Miguel Gonzalez and get away with it somehow. It’s a credit to the team that they show patience with these players, though the lack of minor-league options perhaps takes away from any virtue.

The Orioles also show the most skill in building the most volatile segment of the roster, the bullpen. It wasn’t mere appreciation that made retaining Darren O’Day the team’s no. 1 offseason priority; keeping a well-stocked relief corps has always been a favorite tactic, and given that the team has gotten fewer innings out of its starters than any other contender besides Kansas City, it’s a wise one. It also explains a degree of their defiance toward Pythagoras.

The team also relies on variance offensively, in the form of the home run. They’ve hit more than any other team in the majors. This would seem like a defensible strategy, and it is, but there is still a quiet bias against the team that relies on power to score its runs; people feel like the home runs will stop at some point. Perhaps it will, but given the talent in the lineup, it can hardly be assumed.

So how do you summarize a team built around its lack of identity? It may as well be this guy:

That smiling, anonymous face belongs to Nolan Reimold, proof that it’s not only the prodigal sons who return. Once a middling prospect, then an injury-ravaged disappointment, Reimold was cut by the team last summer, signed by the Blue Jays and waived again, finishing the year off with the Diamondbacks. It’s the kind of career arc that usually ends in obscurity, that perhaps even should end there. And yet here Reimold is, back on the team that didn’t want him, producing a .267 TAv that is, in all respects, truly average.

You need to be logged in to comment. Login or Subscribe
ErikBFlom
The explanation is "Orioles Magic." You really should pay attention to their marketing department.
Reply to ErikBFlom
Moatsey05
Two words: Buck Showalter. By any measure, he is one of the best managers in the game. One only needs to watch a few of his post-game press conferences to understand why his players respond to him.

As long as Buck is in charge, there will be a winning, disciplined and competitive team at the Yard.
Reply to Moatsey05
GRob78
I completely agree with this. Great leaders can take mediocre talent and accomplish great things. Buck is doing this on a daily basis in Baltimore.
Reply to GRob78
mlsgrad99
I love those "performance vs PECOTA" charts. Would love to see them for other teams.
Reply to mlsgrad99
happyfunmiles
Lest we forget that Dan Duquette turned sub-replacement level backup catcher Steve Clevenger into Mark Trumbo, good for a roughly three win swing.
Reply to happyfunmiles
balticwolf
For the face of Reimold's, you could easily substitute the one that belongs to Ryan Flaherty. He filled in admirably at 3B while Hardy was on the DL (with Machado moving to SS).

Of course getting Trumbo for a backup catcher was highway robbery. And yet another Rule 5 guy--Rickard--is making contributions to the team, continuing in the line of either Rule 5 picks like Flaherty and McFarland.

In the end, I think it's all about Showalter. As one comment above me said, you can watch his press conferences and understand why players respond to him.

It's been that way ever since he arrived in 2010. He has a favorite line he gives the players every spring training: "Your actions speak so loudly, I can't hear a word you're saying." Everybody on the team understands that you better get the fundamentals down, work hard to correct your deficiencies and keep your head in the game. He doesn't play favorites and he nevers says anything negative in public about players---all criticism comes behind closed doors.
Reply to balticwolf
BrettLarter
Absolutely, I'm glad someone brought up Flaherty! This offseason when his salary went substantially up, I'm glad someone (likely Showalter) pushed to keep him around.
Reply to BrettLarter
balticwolf
Oops! Should read (in the second paragraph) "other Rule 5 picks."
Reply to balticwolf
DeltaXi65
There's definitely an esprit de corps in Baltimore's locker room that you don't see everywhere else - like, say, in Washington. I think that matters, too, but like the others, Buck is the real decider. We were floundering for years until he came in and righted the ship. Baltimore has always excelled with good management.
Reply to DeltaXi65