Chris Sale
Sale altered his approach this season, aiming for more efficient at-bats by trimming the strikeouts and gunning for weak contact early in the count. Everything was going swimmingly for the first two months of his new style. Sale posted a 1.58 ERA through his first nine starts with just 39 hits allowed and a modest 62 strikeouts against 10 walks in 68 1/3 innings, while averaging a robust 7.6 innings per turn, including three complete games. He then coughed up six runs in just 3 1/3 frames against the Indians, and though he has exceeded six innings in each of the four starts since, he has also given up three or more runs in each of his last three turns.

The strikeout numbers have been fine the last two starts, but the turn prior he struck out just two Tigers over 6 1/3 innings of work, this from a player who led the majors with 11.8 K/9 last season, a year after leading the AL with 10.8 K/9. The light K count this season was fine so long as he was putting zeroes on the scoreboard, and though the ERA still stands at a solid 2.94 mark for the season, concern is starting to creep in for a pitcher who’s ERA is 6.07 over his past five starts.He gave up five homers over those first five starts of excellence, but he has given up five more bombs over just the last three games. Is it just a bad stretch, or is there something else brewing, and will Sale make a change to the contact-oriented approach in order to turn the tide?

Sale’s velocity is down 1.8 mph this season, which is part of the design, but it’s more troubling that his two outings with the highest velocity this season are also his worst two outings of the year. It’s as if he’s trying to ramp up the velo when trouble strikes, but rather than help him to get out of jams the extra pitch speed has led to big flies and crooked numbers on the scoreboard.

Perhaps a bigger issue than the velocity is the disappearance of his changeup. Sale is tossing el cambio half as often this year as he did each of the last two campaigns, and the pitch has virtually disappeared against left-handers, with just a 2 percent frequency that is way down from the 18 percent rate of last year. He has replaced the lost changeups with extra fastballs, despite the fact that he’s bringing the heat with less juice this season. Perhaps the league is catching on to his simplified approach, or perhaps Sale’s command is just off, because for the last five starts he has been filling up the strike zone. 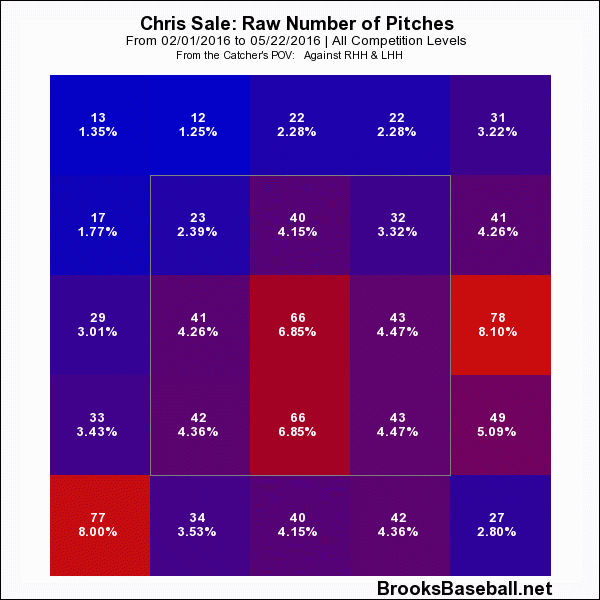 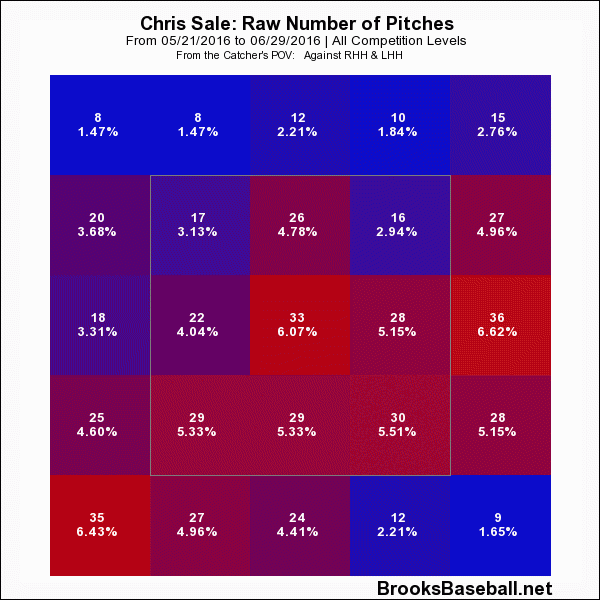 Odds are that his issues stem from a combination of both, in that the word is out on his fastball-heavy approach and diminished heat. Hitters have fewer changeups to worry about swinging over the top of, so those hittable pitches that land in the strike zone are tempting batters who are already sitting dead red. Sale needs to make some adjustments, because right now he is playing right into the hands of opposing hitters.

Matt Shoemaker
Shoemaker’s struggles last season were followed by an atrocious start to 2016, as his ERA on May 16 was an unsightly 8.49 through seven starts. Then, suddenly, he transformed into a strikeout monster, whiffing 23 batters over his next two starts (15 2/3 innings). After failing to exceed five Ks in any of his first seven turns, he has now cleared six or more in five straight.

Three double-digit strikeout games in his past five, just one walk allowed over that stretch, and a 1.88 ERA to show for his handiwork. A 48:1 K:BB ratio in 38 innings might be nearly impossible for any non-Kershaw pitcher to repeat, but there is no doubting the massive transition that Shoemaker has made, going from a pitcher whose hold on a rotation spot was hanging by a thread to the ace of his staff in the span of about a month.

The four runs that he gave up against the Yankees on June 6 were the most that have crossed the plate against Shoemaker during his great run, but he actually blanked the Yanks for the first six frames before a couple of late homers sent him to the showers. He has thrown seven or more innings in each of his last five games, and those two homers were the only two that he has surrendered over that stretch.

Well, he’s throwing a tick harder, upping his weighted average fastball velocity from 91.7 before his start on May 21 to 92.7 mph afterward. The biggest alteration, however, has been his use of the split-finger fastball. Shoemaker used the split 22.8 percent of the time during the brutal stretch where he was being hammered, but that frequency has nearly doubled in his last five starts, shooting up to 43.2 percent and accounting for 27 of his 48 strikeouts. The split has been the key to Shoemaker’s transformation, and what we are seeing is a completely different Matt Shoemaker, as even in his breakout season of 2014 the split frequency was under 22 percent. Here’s hoping that Chris Sale is taking notes.

CC Sabathia
The large lefty is turning back the clock this season, with a shocking 2.20 ERA through 11 starts, following three consecutive season with an ERA over 4.70, and he's doing so in very unorthodox fashion. The walk rate of 9.9 percent would qualify as his highest mark since he was 21 years old if over a full season, and is two full percentage points higher than anything that he has posted since he was 23.

His last two months have been especially effective, as Sabathia hasn’t surrendered more than two earned runs since April and he has a 0.50 ERA over his last three games, covering 18 innings. He has quality starts in eight of his 11 turns this year, and he has given up a half-dozen hits or fewer in his past eight starts.

The K rate of 20.4 percent is a decent approximation of what he has done the last few years, but CC has survived by keeping the ball in the yard. He has allowed just two homers in 65 1/3 innings this season, a 0.7 percent rate that is a full percentage point lower than anything that he has ever posted in the majors. The 35-year-old has also given up just 11 other extra-base hits in his 11 starts this season, giving him a combined rate of just 4.7 percent extra-base hits allowed this season.

He's been doing a great job of keeping the ball low and away this season, and the Renaissance has been a joy to watch, but Sabathia is doomed for regression. The homers will come, and if he doesn't find a way to limit the walks then crooked numbers will follow. The walks and the low homer rate have come together through his general avoidance of the strike zone, but advanced scouting reports are due to catch up to this approach, and when Sabathia starts bringing more baseballs near the strike zone to combat batter patience, there is a good chance that he will meet his comeuppance.