The Thursday Takeaway
Colby Lewis’ day didn’t start out as anything particularly special—a 20-pitch first inning of exactly the sort of unremarkable-but-decently effective stuff you expect from Colby Lewis. It didn’t take long, however, for him to look not simply decently effective but uncommonly so. There was an impressive swinging strikeout courtesy of his slider in the second, then there were three straight flyouts in the third, and from there, he was really dealing. The next few frames zipped by, as Lewis breezed through with eight or fewer pitches per inning through the seventh, including a series of six straight groundouts. True to his typical style, the performance wasn’t flashy—just three strikeouts through seven, with his standard mix of high-80s fastballs and a slider not too far behind—but it was perfect.

However, Lewis wasn’t the only pitcher shutting things down. Though Oakland’s Daniel Mengden wasn’t going for a perfecto (a walk and a single early on had spoiled any chance of that), he was going for a shutout. With the game scoreless heading into the seventh, Lewis’ bid for perfection was growing layered with the standard questions of this situation—when aiming for the win needs to take priority over aiming to stay perfect, whether there’s validity to an unwritten rule of no bunting here (not for the A's, who tried it to no avail in the sixth). But then Ian Desmond led off the seventh with a solo shot, and an error, a single and a fielder’s choice grounder later, the Rangers had given Lewis a 2-0 lead to work with. Mengden’s day came to an end, but after Lewis worked a perfect seventh, the As bullpen allowed even more damage with a two-run Adrian Beltre double in the eighth. For good measure, the Rangers tacked on another run, and Lewis took over a 5-0 lead for Texas in the bottom of the inning.

As far as perfect game narratives go, it had all the ingredients for something great. A tale of reinvention and redemption and journeying to Japan to find yourself, a former first-round draft pick who lost his shine to injuries, now a unexciting-but-dependable innings eater about to grasp perfection for just one day at age 36.

But no. With two outs in the bottom of the eighth, Lewis missed high and away with a fastball to Yonder Alonso—once, twice, again, again. A four-pitch walk, and the perfecto was gone. 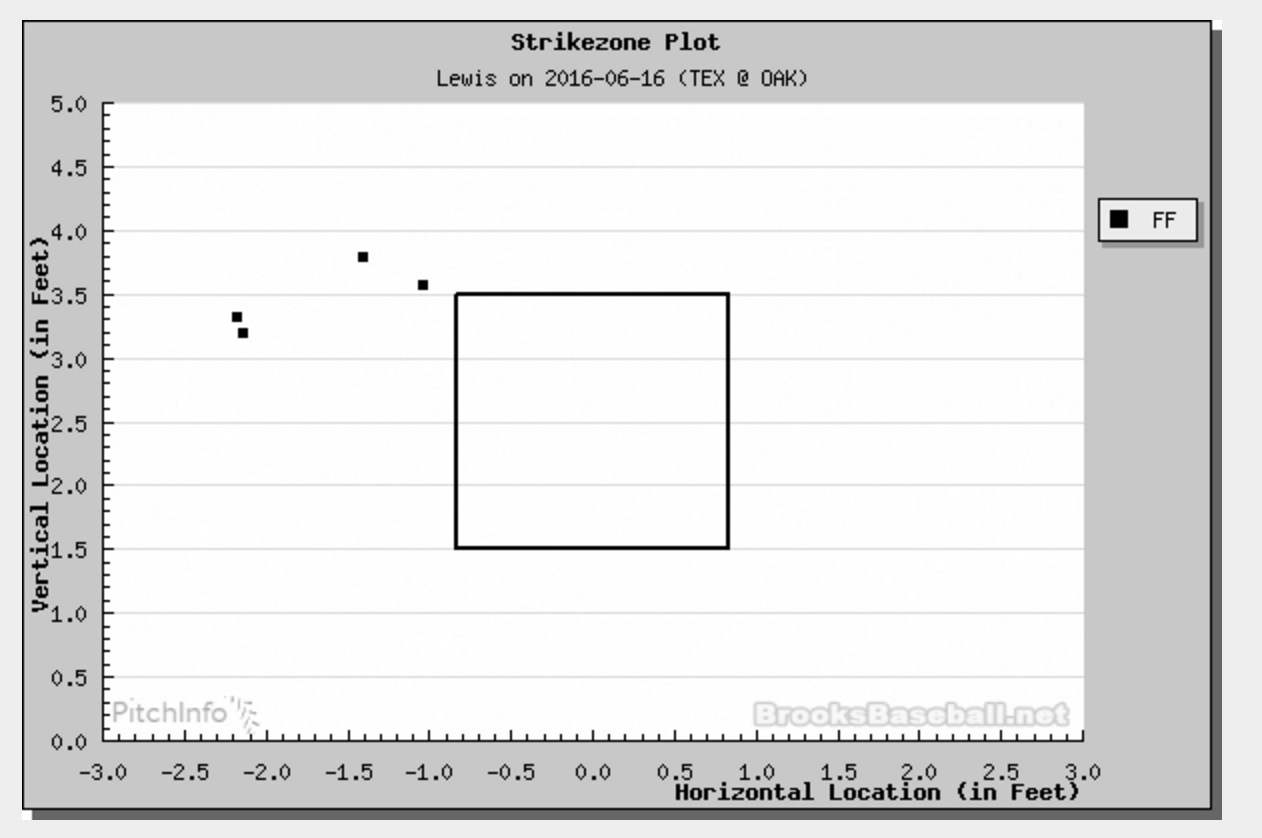 The no-hitter was still on, though, at least if Ryan Rua had anything to say about it. The leftfielder made a leaping catch at the warning track to snare a Marcus Semien liner for the final out of the inning and keep Lewis’ no-hit bid alive into the ninth.

Three outs away, Lewis came on to close out both the 5-0 victory and the no-hitter. Facing the bottom of Oakland’s order, he began the ninth facing off against Max Muncy, who drove a fastball on a 2-2 count over Nomar Mazara’s head in right field. Mazara went back, at the wall, almost there—and not quite. Muncy had a double, the no-hitter had gone the way of the perfect game, Lewis’ chance at a Hollywood arc to perfection was no more.

Gone was the shutout, too, after Lewis allowed Coco Crisp to drive in Muncy with another double. He closed out the game from there, a 5-1 victory for the Rangers, snatched from the jaws of something so much greater.

Quick Hits
You’d be forgiven for thinking we’d hit our limit for Bartolo Colon-related joy at the plate this year. What, after all, did we do to deserve the wonder of Big Sexy’s first career home run earlier this year? But Colon gave us something almost just as good Thursday—a double off Juan Nicasio, meaning we received the joy not only of seeing Bartolo get a hit but also of seeing him make decisions on the basepaths.

A Curtis Granderson single moved him to third, and then came the real gift—watching Bartolo Colon tag up to score on a sacrifice fly from Yoenis Cespedes. Really.

In addition to delighting with his baserunning, Colon did pretty solidly on the mound, striking out eight over 7 2/3 and holding Pittsburgh to two runs. The Mets went on to best the Pirates 6-4.

It was a good day for the Tigers’ long ball. After Detroit fell behind 2-0 to Kansas City early, Victor Martinez kicked things off with a solo shot off Danny Duffy…

…which he followed up with another solo shot off Duffy…

…which he capped off with yet another solo shot, albeit off Chien-Ming Wang this time.

In between, Detroit got additional home runs from Nick Castellanos, James McCann and Miguel Cabrera, sealing a 10-4 victory. The night wasn’t without its bad news, though—V-Mart’s fellow Tiger Martinez, J.D., left the game with a broken elbow after running into the outfield wall. Early reports suggest he could be out at least a month.

Jonathan Villar played the hero as the Brewers beat the Dodgers to snap a three-game losing streak. With the game tied at six entering the ninth, Villar took Pedro Baez deep for a two-run homer that sealed the victory for Milwaukee. The Dodgers tried to mount a comeback in the bottom of the inning, loading the bases with two outs—with none other than Clayton Kershaw representing the tying run after coming in to pinch-run for A.J. Ellis. But a Corey Seager strikeout ended the night, and the Brewers walked away with the win.

Defensive Play of the Day
In the first inning of the Nationals-Padres game, Alexi Amarista showed off his range by darting into shallow left to rob Ben Revere of a hit. Ultimately, though, the Nats came out on top 8-5.

What to Watch on Friday
Jake Arrieta’s winning streak may have come to an end, but he’s probably still worth watching. At any rate, he’s starting in Friday’s only afternoon game, as the Cubs face off against Francisco Liriano and the Pirates at 2:20 EST.

The immediate impact from the Red Sox’s Wade Miley trade was meant to come from Carson Smith. But with Smith undergoing Tommy John at the start of the season, any benefits the Red Sox reap from the trade this year will have to come from Roenis Elias, who debuts in Boston’s rotation Friday. He’ll face off against his former organization, the Mariners, with Hisashi Iwakuma on the hill for Seattle at 7:10 EST.

Finally, Julio Urias will take the mound against the Brewers to try to notch his first career win at 10:10 EST. After struggling in his first two starts, his last two have looked considerably more promising, with seven Ks apiece and two runs or fewer allowed. His current stretch in the big leagues likely won’t last much longer, so though he’ll be back, catch him while you can.