The Wednesday Takeaway
At some point during the 1992 Japanese Pacific League season, an 18-year-old outfielder named Ichiro Suzuki made his professional debut with the Orix Blue Wave and recorded his first career hit. The teenager only made 95 plate appearances that season and picked up 24 hits, but it ended up being the humble start of what would end up being a special career. Nine years later, a 27-year-old Ichiro would arrive stateside as a star after racking up 1,278 hits in Japan. On Opening Day of 2001, the future legend recorded his first career hit in Major League Baseball.

After spending the better part of the next 15 seasons racking up hits at an incredible rate, it all came to a climax on Wednesday afternoon, when Ichiro collected the 4,256th and 4,257th hits of his professional career. The former came via swinging bunt to lead off the game, which is simply vintage Ichiro Suzuki.

The latter came in the ninth inning, which is when Ichiro rolled one into the right field corner for a double and cemented his (somewhat controversial) place in history.

Normally, a baseball player recording his 2,979th career hit doesn’t come with too much fanfare. The standing ovation typically arrives 21 hits later when the player reaches 3,000, and surely there will be plenty of celebration surrounding that particular moment once it comes. But for now, there was still plenty of respect and adulation raining down upon Ichiro for his 4,257th hit across Nippon Professional Baseball and Major League Baseball.

As far as Major League Baseball itself is concerned, the debate around who is the Hit King begins and ends with Pete Rose. He got all 4,256 of his career hits in MLB, and that accomplishment will continue to stand for the foreseeable future. With that being said, what Ichiro just accomplished is incredible in its own right. Ever since starting upon his amazing journey through professional baseball on both sides of the Pacific Ocean, Ichiro has set the single-season hit record at 262 and recorded 10 consecutive 200-hit seasons. He has the second-most hits from age 27 on in history, and he's still going, and he did it without the benefit of being his own manager late in his career. (He's also, if this matters, likeable.)

#Marlins Ichiro has seen 37,125 pitches in his MLB career. Only 25 came while he did not have a lifetime batting average of at least .300.

There’s going to be plenty of debate about whether or not Ichiro’s 4,257 career hits properly match up with Pete Rose’s hits. What isn’t up for debate is the fact that for the past 15 years, baseball fans have truly been lucky to witness a master of the art of hitting practice his craft stateside. Getting 4,257 hits at that level of play is astonishing, and it’ll be a long time before we see someone else approach what Ichiro’s been able to do over a storied career with that masterful swing of his.

Quick Hits
While the talk of the baseball world may have been centered around what was going on at the plate, we were treated to some excellent pitching on Wednesday afternoon. That statement is a given whenever Clayton Kershaw is set to take the mound, and he duly delivered against the Diamondbacks. Arizona had managed to victoriously make it through a two-week murderer’s row of Dallas Keuchel, Jake Arrieta, and Jose Fernandez, but that came to an end once they ran into Kershaw.

Shockingly enough, Kershaw actually gave up a walk. He managed to get over the shock of that rare event by striking out 11 and only giving up two runs and five hits over 7.1 innings. 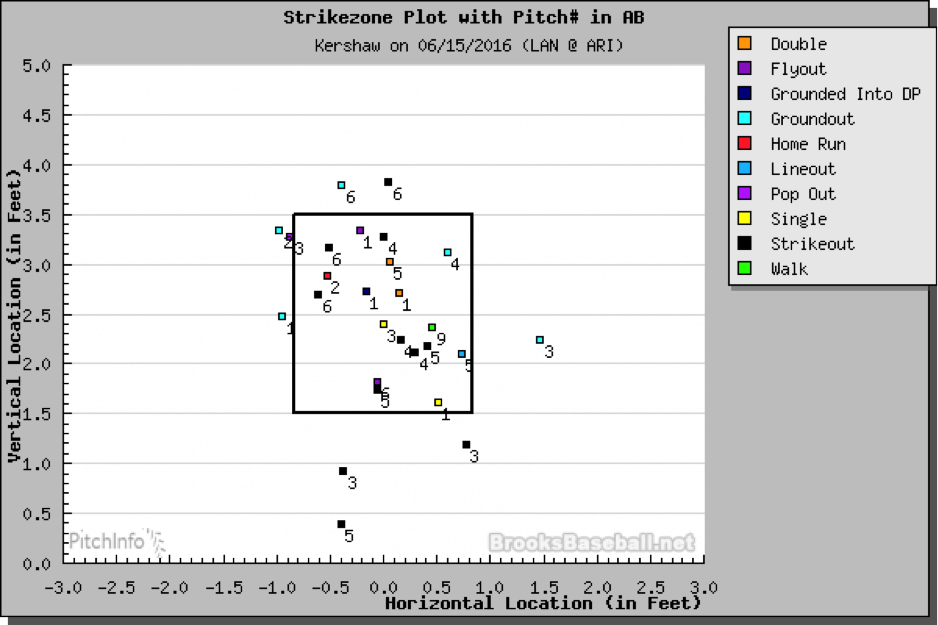 Kershaw wasn’t the only starter who collected 11 strikeouts on Wednesday evening. Noah Syndergaard gave up a hit to start the game against Pittsburgh. Seventeen batters and seven strikeouts later, he finally gave up another hit. Ultimately, Syndergaard gave up five hits on the evening and finished with only one earned run and zero walks. The Pirates felt the hammer of Thor in more ways than one, as Syndergaard completely stymied them on the mound and the Mets bats came alive to the tune of an 11-2 victory. 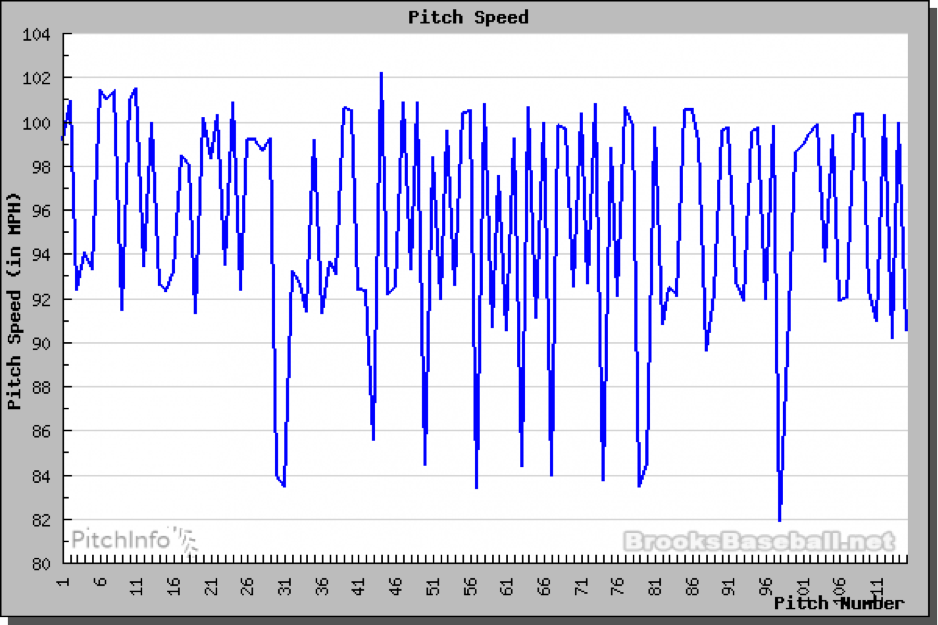 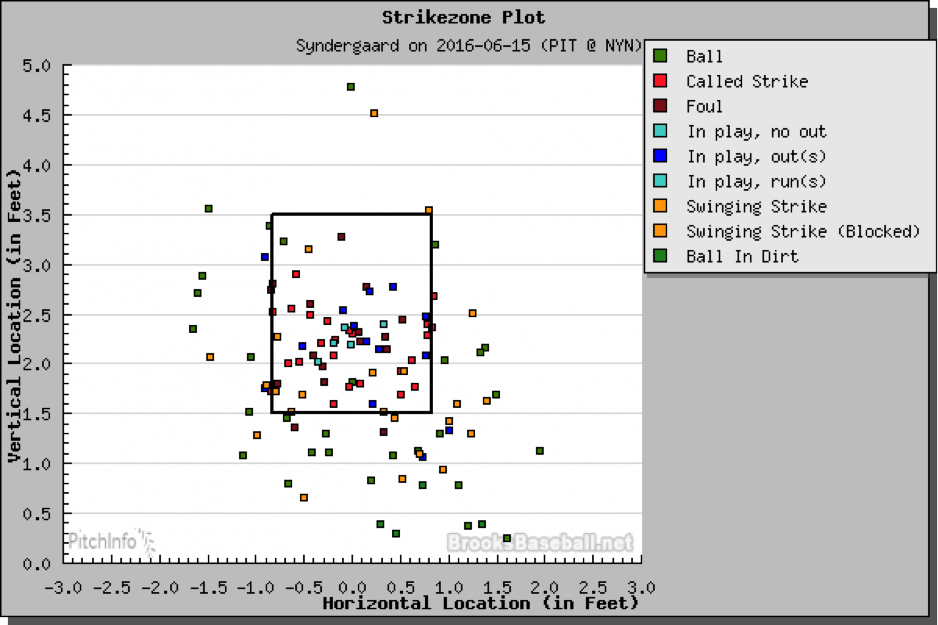 Johnny Cueto’s off to a lovely career with the San Francisco Giants, and he kept things up with another good start, this time against the Brewers. Cueto may not have picked up 11 strikeouts or topped 100+ mph on the radar gun on a regular basis, but surely the Giants will be satisfied with an outing that included nine strikeouts and only one walk over seven innings pitched. They also probably really appreciated the fact that one of those strikeouts came via quick pitch. That’s always nice.

Finally, we’ve got our first cycle of the 2016 season, and it came from the Atlanta Braves. Yes, seriously. From the most obvious candidate possible from that team (Freddie Freeman), but surely nobody could’ve predicted that this achievement would come from the team that’s currently home of the worst offense in the bigs. Baseball is a weird game, but then, cycles are weird achievements.

Defensive Play of the Day
The Astros beat the Cardinals 4-1 yesterday, and the defense of George Springer and Carlos Correa deserves as much credit as the Astros' pitching. First, Correa was able to show off both his impressive range and solid arm strength by robbing Aledmys Diaz of a single in the third inning.

What to Watch on Thursday
The two teams who are currently sitting on top of the AL East have been playing a fun series, as the Orioles and Red Sox have split the first two games. Chris Tillman was able to shut down Boston’s powerful offense on Tuesday, but the Red Sox responded Wednesday with a five-run third inning—including a monster three-run shot from Hanley Ramirez—to win 6-4. Now, the two teams will be heading into the rubber match with identical records of 37-27, but only one team’s going to be leaving the ballpark on Thursday on top of the AL East. It’s only June, but it's also already June. These games are starting to feel big.

You need to be logged in to comment. Login or Subscribe
oldbopper
One very big cheer from this baseball fan for Ichiro but not only for his hitting. It is the defense, and the great arm, that are my most vivid memories. Oh, that great arm!
Reply to oldbopper