Sometimes great players are great for really obvious reasons. Take Mike Trout: He’s just flat-out the best hitter in baseball, and he’s also a good fielder and base runner and [insert baseball skill here]. He’s better than everyone else, but it’s just straightforward smack-you-upside-the-head talent. Take Clayton Kershaw, too: He’s the Trout of pitchers, almost robotic in his efficiency and mastery of the craft, pushing the boundaries of greatness to levels approaching boredom. Even his mistakes are effective.

Other times great players are great for less obvious reasons. Take Johnny Cueto: He’s got solid stuff and excellent command; he gets a lot of groundballs and doesn’t allow many home runs; he pitches to contact and fields his position well; he racks up strikeouts when needed and hits 95 in the eighth inning; he’s death to the running game.

Oh yeah, and he also has like 37 different deliveries. Here are those deliveries.

This is Cueto’s go-to option in 2016. It starts out looking like your normal wind-up, but then, like Sam Miller once wrote, “it’s like Cueto is a film editor and he just decides to snip frames 30 through 64 from the reel.”

Sometimes Cueto will speed up this delivery another notch, almost in an attempt to out-quick his usual quick pitch. Other times he’ll slow things down a bit, seemingly always toying with his tempo. Other times still Cueto will tinker with his quick pitch delivery so thoroughly that it must be documented and re-categorized.

This is where Cueto moves his left foot to start his delivery, then, before finishing things, abruptly stops midway through.

Occasionally he decides to start over.

The “Something”
Approximate Times Attempted: 2

Giants’ play-by-play guy Duane Kuiper said Cueto added a little . . . something to his delivery here, and that’s about the best way it can be described.

This is now Cueto’s secondary look, and he breaks it out whenever the mood strikes. There are variations, of course, but the meat-and-potatoes version looks like this:

Like its cousin, the delayed quick pitch, this offering features Cueto halting mid-delivery.

This is sort of an abbreviated twist, almost like a quick twist. Hence, the hybrid:

This is the gateway to the shimmy, and it often features Cueto suspended in his pitching motion for an uncomfortable amount of time.

The shimmy needs no introduction.

Okay, so Cueto has many deliveries.

The best way to understand Cueto’s multiple deliveries is to think like a hitter. Hitters have various methods to time pitchers—maybe a toe tap or a bat waggle or a leg kick. For the most part, against a conventional pitcher, they’re able to easily time the delivery (the pitch itself might be another story). With Cueto, even getting the delivery down becomes an issue.

In the seventh inning of his most recent start against the Dodgers, Cueto threw the gamut of deliveries at Enrique Hernandez. Hernandez was timing the quick pitch (left image) and conventional twist reasonably well, so Cueto gave him a shimmy (right image). 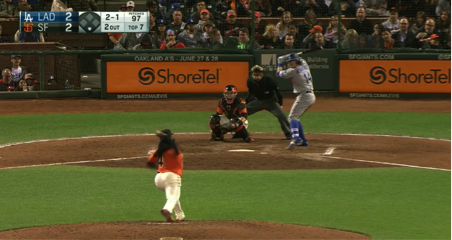 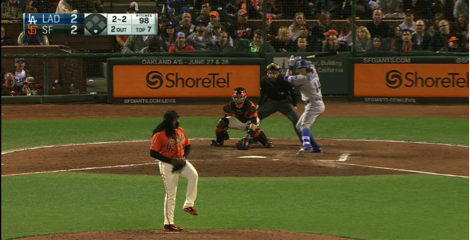 When Hernandez was timing Cueto, he was toe-tapping just before Cueto released the ball. Look what happened when Cueto mixed in the shimmy—Hernandez is well ahead of schedule. The pitch was in the dirt and Hernandez held off, but the whole at-bat looked like a battle between Cueto’s delivery and Hernandez’s front foot. By the time Hernandez actually got around to trying to hit the baseball, it was too late—he struck out on a high fastball seven pitches in.

In an earlier start against LA, Cueto started Justin Turner off with three straight quick pitches. For the fourth pitch, Cueto busted out a hybrid twist (left) and Turner awkwardly took it. Likely noticing that, Cueto mixed things up again for the final pitch of the at-bat (right).

When Cueto follows a quick pitch with a twist (or vice versa), batters are hitting just .234 when they put the ball in play. He’s also induced a 48 percent foul ball percentage on pitches where the batter makes contact. Cueto’s obsessed with trying to keep hitters off balance.

*Based on MLBAM pitch classifications

Here’s an interesting twist—pardon the pun.

Cueto actually uses his fastball significantly more often out of his quick pitch delivery. When he twists, turning his back to the hitter, he’s more likely to go off-speed, particularly with a changeup. It’s almost as if Cueto is trying to sneak the heater past hitters with his quick pitch while lulling them to sleep with off-speed stuff out of the twist. Of course, Cueto doesn’t get so rigid with pitch selection that a hitter is likely to notice, at least not without spending an inordinate amount of time charting the pitcher.

Another oddball point: When Cueto does throw his fastball (ignoring cutters) out of the twist, it travels nearly a half mph faster on average than his quick pitch fastball (93.0 to 92.6). Like we said a few weeks back: Hitting is timing. Cueto is upsetting timing.

Cueto is good for a lot of reasons, and it’s still not clear that his varied deliveries have much to do with his success. If you watch Cueto and simply ignore the twists and the shimmies and the quick pitches, you still see 94 mph fastballs on the black, bundles of weakly hit grounders, a 4.26 strikeout-to-walk ratio, and stretch work that all but eliminates the stolen base.

Then again, even if all of the deliveries are just for show, a sort of placebo effect that makes Cueto feel like he’s doing something—messing with the minds of hitters—he really isn’t, it’s working. At the very least, it’s not not working. And we have some evidence here—scant evidence, mind you—that maybe there is something more going on.

Plus, it’s just fun to watch.

References and Resources
Chris Mosch wrote about Cueto’s many deliveries last year, an article I unfortunately didn’t see until almost finishing this one.