When I was a kid, I loved old magazines. Books were fine too, as far as they went. But there was something surreptitious about reading old magazine articles, reading outdated reviews and glancing at anachronistic advertisements. Something about the transitory nature of them made them feel forbidden, like they were written for a specific moment that I was intruding on. Like the powder blue pullovers and the shaggy hair of the baseball generation just before mine, they made me feel like I was peeking into the wisdom of adulthood.

This tradition lives on in the internet, where everything is forgotten a week after it’s published, and where immortality is easy to achieve, as long as you’re willing to keep paying for the servers. Everyone is familiar with the Space Jam website, but there are a million Angelfire webpages and a million animated construction signs, stick figure Sysiphuses digging in silence for all eternity. A million personal homepages, each a momentary attempt to share, to connect with the rest of the world. All of them frozen, intact, the paths leading to them forever obscured.

I don’t remember how, exactly, I found a path that led to Juan Gonzalez.

I grew up vaguely disliking Juan Gonzalez because he got lots of RBIs. He won the AL MVP award twice over my local shortstop, and other than that I never really thought about him. I’m not alone; after enjoying copious amounts of money and leg problems in his thirties, he lasted two years on the Hall ballot before slipping into relative obscurity.

But there is a place where Juan Gonzalez was (is?) remembered: juangone.com.

Unlike the stereotypical forgotten website, juangone.com is no tile-background, blink-text mess. It’s a simple bulletin board with a few pages above it: a short biography, a collection of photographs, a collection of stats, links to newspaper articles. It’s a humble shrine for a fine baseball player, a man one could easily conceive of '90s kids and their basic HTML skills adoring. The text carries the faint whiff of archaeology, of a place unbound by time: The final article, lifted from the Sun Sentinel in 2008, carries the guarded optimism of spring training, of an athlete valiantly making a last comeback. There are no mentions of Gonzalez being cut that spring, of becoming a real person afterward. This is a place of worship for Juan Gonzalez, Baseball Player; Juan Gonzalez the person does not seem to exist.

There are 87 registered members of the Juan Gonzalez Forum, the most recent of which joined in February. The most recent post on the message board went up four months ago. There are three categories: one for Juan Gonzalez news, one for trading and bartering memorabilia, and one for off-topic discussion. In reality, all three blend into one topic: baseball cards.

It’s been a long time since I thought of card collecting as a social exercise. As a boy I engaged in the usual wheedling and bickering at the back of the school bus, as my friends and I maneuvered for each other’s prized cards. I still have the cards, but they’re not on display, not a topic of conversation with my friends; they go in a corner of the garage, to be glanced at occasionally when I need a story idea.

But at juangone.com, not only did people talk about their collections, their latest finds and their white whales, the users created a database of every Juan Gonzalez card printed, complete with high-res scanned images. One thread reveals envy that a user has managed to obtain a rare variation on a Gonzalez card in a signature-based insert set—one without the signature. Members compiled their entire collections online and compare with each other. They share that single greatest thrill of the card collector: of busting open a pack and finding that rare cardboard bauble inside, a slice of bat or jersey, a scrawled autograph, three liberty bells in a row. They share, and they congratulate each other. 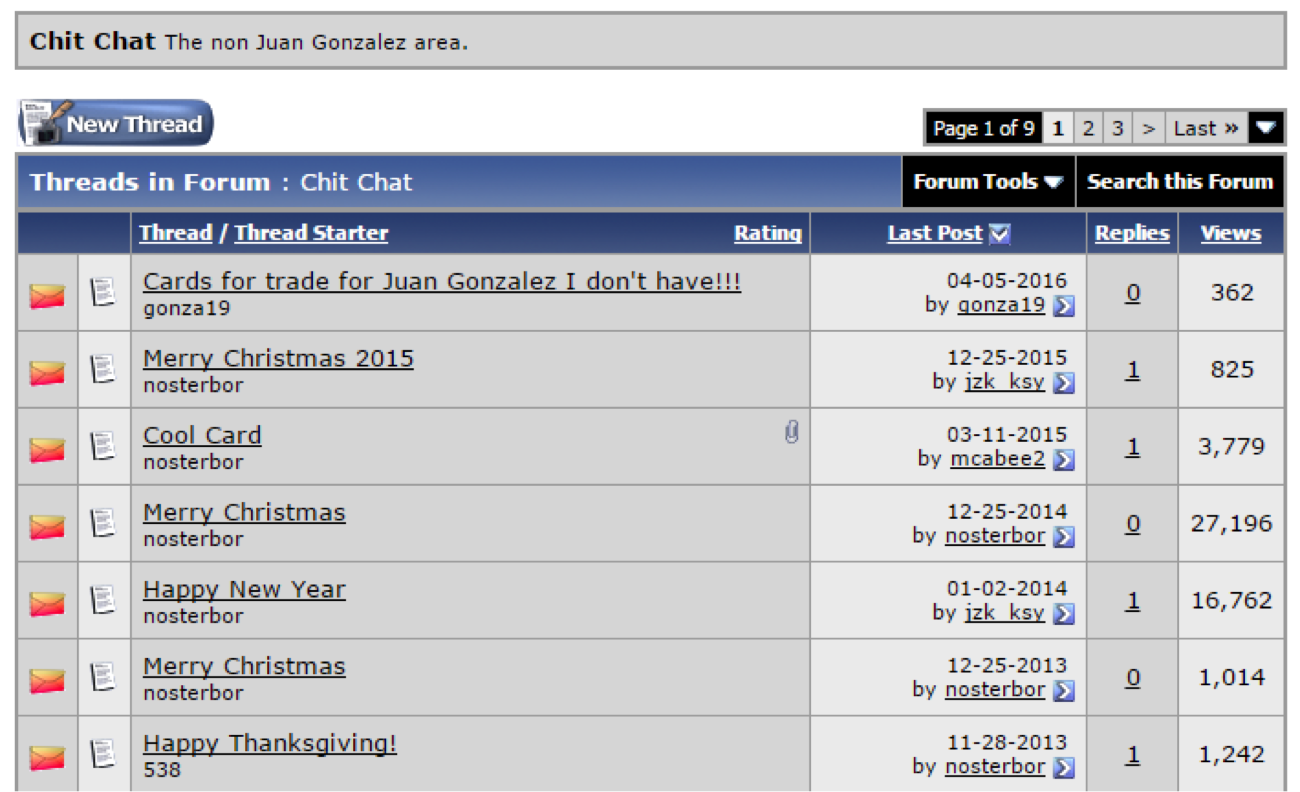 The site isn’t really dead; according to the server, as of writing, 12 people are online (all guests). Maybe it’s just that there’s nothing left to say, no more Juan Gonzalez to experience. One can scarcely imagine what the man himself would do if he were to find the site and post there himself. Does he know? Does he read? Does he wish people would ask him about his life, what he’s done after baseball? Is he even the same person that these people are collecting photographs of?

It seems strange that people in 2016 would be enjoying a very 1991 hobby and concentrating on a very 1991 baseball player; the value of both, culturally and monetarily, have been locked in a twin spiral. But it’s not so strange; people comment that they’re glad Gonzalez isn’t so popular, that the price of cards has seemingly bottomed out. It allows them to afford more, to take more of this undeniable connection to baseball and to their own youths for themselves. It’s as strange as caring about baseball at all, or leaving little blocks of stone where our earthbound remains dwindle. The final post on one collector’s guestbook:

Previously: Can I Interest You In A Juan Gonzalez Hall of Fame Brochure?

You need to be logged in to comment. Login or Subscribe
jhardman
I doubt Igor would access this site or comment on it because he was an athlete who did not do much of anything in English. During his heyday, many players of that era were collecting lots of endorsement money but the two-time MVP was doing all of his endorsements in Spanish and none in English.
Reply to jhardman
ceadie
Wonderful artical.