The Wednesday Takeaway
August 28th, 2012 was a relatively normal day as far as baseball was concerned. One of the results on that day was a 2-0 Braves victory over the Padres at Petco Park. Chipper Jones and Dan Uggla drove in the two runs that helped propel the Braves to victory, while Kris Medlen pitched eight shutout innings and Craig Kimbrel eventually picked up the save for Atlanta. It was the Braves’ 74th victory of the year, and they’d pick up 20 more for the rest of the season on their way to a berth in the NL Wild Card Game. As far as 2012 was concerned, this was just another spoke on the Braves’ wheel. However, that ended up being the last time that the Braves would win in San Diego for nearly four years.

Fast forward to June 8th, 2016, and nearly everything has changed for both teams. The Braves won 94 games in 2012, but they’ll be fortunate to avoid losing 94 (or 104) games in 2016. Craig Kimbrel eventually became a Padre, and then an ex-Padre. Freddie Freeman was the only player from either team’s lineup in that game from 2012 to play in the game on Wednesday. With all of the changes that happened for both teams, one thing remained constant: The Braves just couldn’t win in San Diego, but that finally changed.

It was going to take a great performance from one of the Braves to break this 12-game hex, and Julio Teheran was up for the challenge on Wednesday. Teheran has bounced back from a relatively poor 2015 season and currently has a 3.29 DRA and a 97 cFIP in 2016. He kept the good times rolling by throwing eight shutout innings and striking out eight Padres while only giving up one walk and five hits. 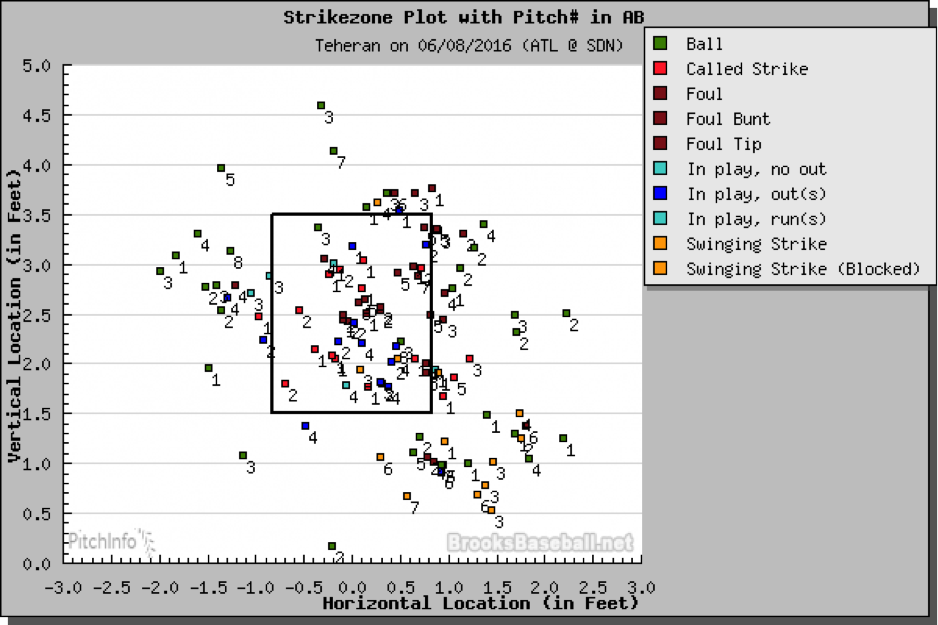 He did make two big mistakes on the day, though, and Wil Myers turned those mistakes into some picturesque dingers at Petco Park.

Other than that, Teheran was great on the afternoon, and he got enough run support from the Braves’ offense to make those two mistakes fade into the background. The Braves offense as currently constructed will never overwhelm the opposition with power, but like any arguably professional team, they can dink-and-dunk you into submission sometimes. Ender Inciarte was a homer away from the cycle. Chase d’Arnaud solidified his status as one of the Braves’ leaders in WARP with a 3-for-5 day at the plate. Julio Teheran even contributed to his own run support by hitting an RBI single, and had a multi-hit day at the plate. Teheran was all over the place in a good way on Wednesday.

This is Teheran's fifth career multi-hit game and first since 9/24/14.

To top it all off, Arodys Vizcaino was able to make up for blowing a save on Tuesday night by nailing one down Wednesday. Simply put, it was a rare good day for the Braves, and an especially good one in that they’ve finally gotten a victory in what’s been a house of horrors for them since 2012.

Helps that the Padres are terrible, too.

Their reward for getting over that hump is a weekend series against the Chicago Cubs. The good times are ever so fleeting.

Quick Hits
Inciarte wasn’t the only player who came close to hitting for the cycle yesterday afternoon. The reigning AL MVP Josh Donaldson put on a fantastic show for the fans in Detroit as he led the Blue Jays to a 7-2 victory over the Tigers. Donaldson went 3-for-4 at the plate with a homer and a triple. On top of that, he also robbed Miguel Cabrera of a hit in the third inning.

James Shields made his White Sox debut last night, and it’s safe to say that he probably wants a mulligan as far as first impressions with his new team are concerned. 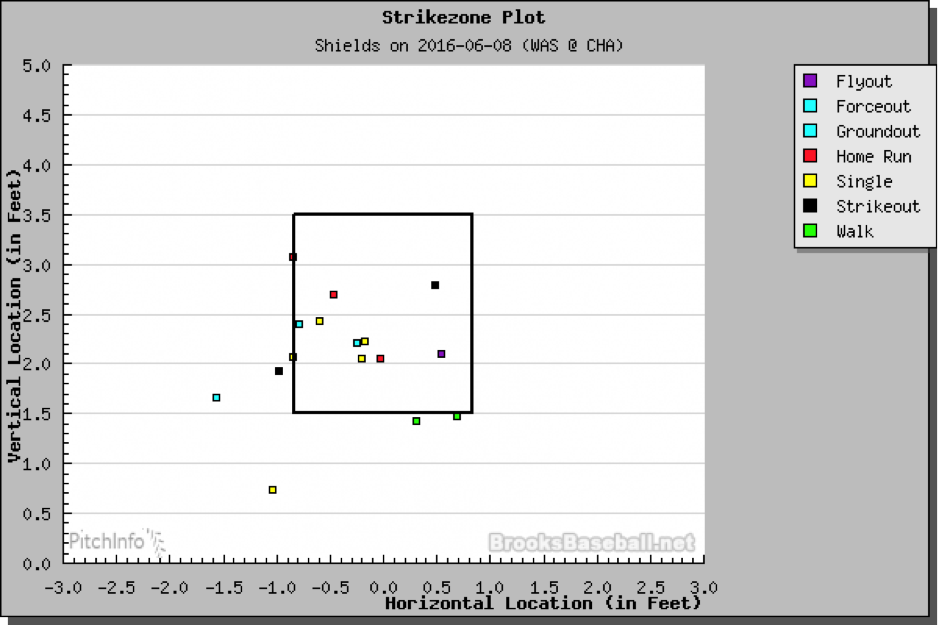 Shields lasted two innings and gave up seven runs on eight hits. Three of those hits were homers, and there was absolutely no doubt about any of them leaving the park.

Jacoby Ellsbury had an interesting day during the Yankees’ 12-6 victory over the Angels. For starters, he hit an absolutely towering homer off of Jered Weaver.

In the very next inning, Ellsbury ended up reaching base on catcher’s interference. That’s already the sixth time that’s happened to him, and he’s only two away from the single-season record. It’s not quite on the same level of Roger Maris chasing the Babe Ruth, but it’ll be interesting to see if and/or when Ellsbury can break this particular record.

That's the 6th catcher's interference for Ellsbury this season. MLB single season record is 8 by Roberto Kelly in 1992.

Defensive Play of the Day
Ian Desmond has made a pretty smooth transition from shortstop to center field, hasn’t he? Jason Castro made the unfortunate mistake of trying to challenge Desmond’s arm, and Desmond let Castro and the Astros know just how bad of an idea that was.

What to Watch on Thursday
The Miami Marlins are on the cusp of falling victim to a pair of dubious sweeps this season. All the way back in April, they were swept at Marlins Park by the Braves, and today they’ll be trying to avoid getting swept by the Twins. It’s one thing to get swept by one team with a win percentage that’s currently in the .280s, but it’s another to get swept in the same season by the two teams who are currently at the bottom of baseball’s table.

If watching a team that’s floating around .500 try to avoid being swept by a team that’s already lost 40 games by early June doesn’t exactly get you excited, then maybe the game between Cleveland and Seattle will be in your wheelhouse. Both of these teams figure to be in the conversation as far as their divisional and Wild Card races are concerned, and the conclusion of this series should be interesting to watch.

Then of course, there’s also the draft. The Phillies earned the no. 1 pick in this year’s draft, and now it’s time to see who they’ll be welcoming into their fold as the top overall pick from 2016. Unless the Phillies swerve everybody, it’ll likely be one of Corey Ray, A.J. Puk, or Kyle Lewis. It’s definitely worth tuning in to see who Philadelphia will be taking the the first pick, and you may as well stick around to see who your team of interest will be taking, as well.

You need to be logged in to comment. Login or Subscribe
rweiler
Also Bruce Bochy made modern baseball history by pulling his 'closer' in the 9th in a save situation and playing L/R matchups instead. Granted, his closer hasn't been very effective but you still have to give Bochy credit for actually trying something different instead of following the herd.
Reply to rweiler