An improbable event is amazing not because it happened but because of all the times before when it didn’t. When a penny falls from your wallet and lands in such a way that it’s balanced precisely on its rim, you’re amazed not only at the fact that you had a penny in your wallet in the first place (which is a pretty rare thing, these days) but also because your brain has been jarred from its stupor: Every other time you dropped a penny, from an infinite past eternity on forward to that auspicious present, it fell flat onto one of its sides or another, or, more drearily, bounced away into some grimy crack or crevasse. In any event, it falling onto its rim was entirely unexpected.

So it is too with Mookie Betts.

If you haven’t heard yet (and please forgive me if you have) Mookie Betts did something rather improbable this week: He homered five times over the course of just seven major-league at-bats. For context, Roger Metzger—the former Cub, Astro, and Giant—took all of 4,676 big-league plate appearances to smack five home runs, which is not only the largest such total for that amount of career home runs but also, I think, at the low end of the number of plate appearances it would take me to do it. Anyway. Point is, Betts hit a lot of home runs this week, and did it over the course of just a two-day period.

There are a lot of possible ways to talk about this, but perhaps the most interesting one—at least to me—is to dodge the question entirely and talk instead about the two plate appearances in which Betts didn’t homer. On the face of it, that’s cheap, but I think it’s defensible. That’s because they’re the ones that established the credulity that he’d later defy. And they both happened on May 31st, when the Red Sox played the Orioles at Camden Yards in Baltimore.

Let’s start in the fourth inning. By this point, Betts had already homered twice (both times off of Kevin Gausman, the Orioles’ starter) and the Sox were up 5-1. There were two outs in the inning, and Gausman was laboring into his 78th pitch of the warm, unhappy night. Betts, presumably, smelled blood. And so the first pitch was, somewhat predictably, a fastball that ended up exactly where Caleb Joseph wanted it: nowhere near Betts. 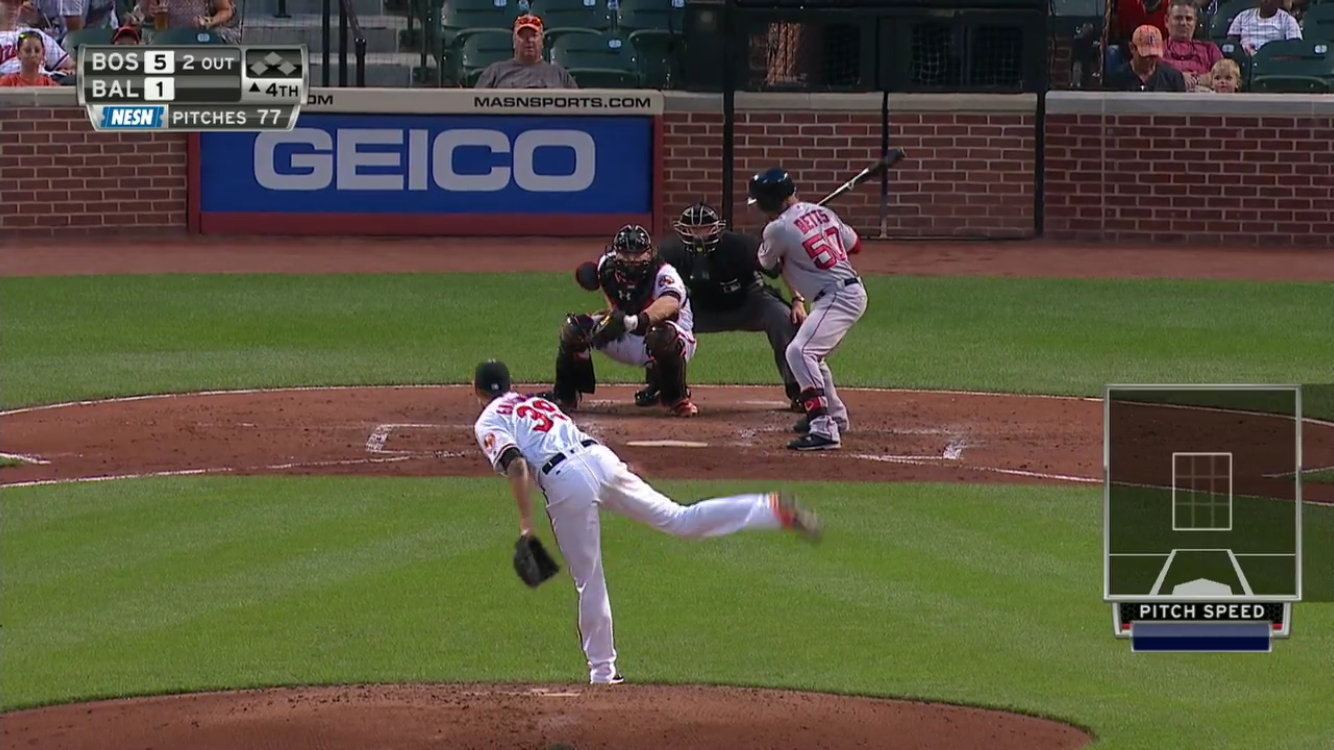 No thanks, said Mookie, and the count went to 1-0. So Gausman decided to be a little bold, and did this: 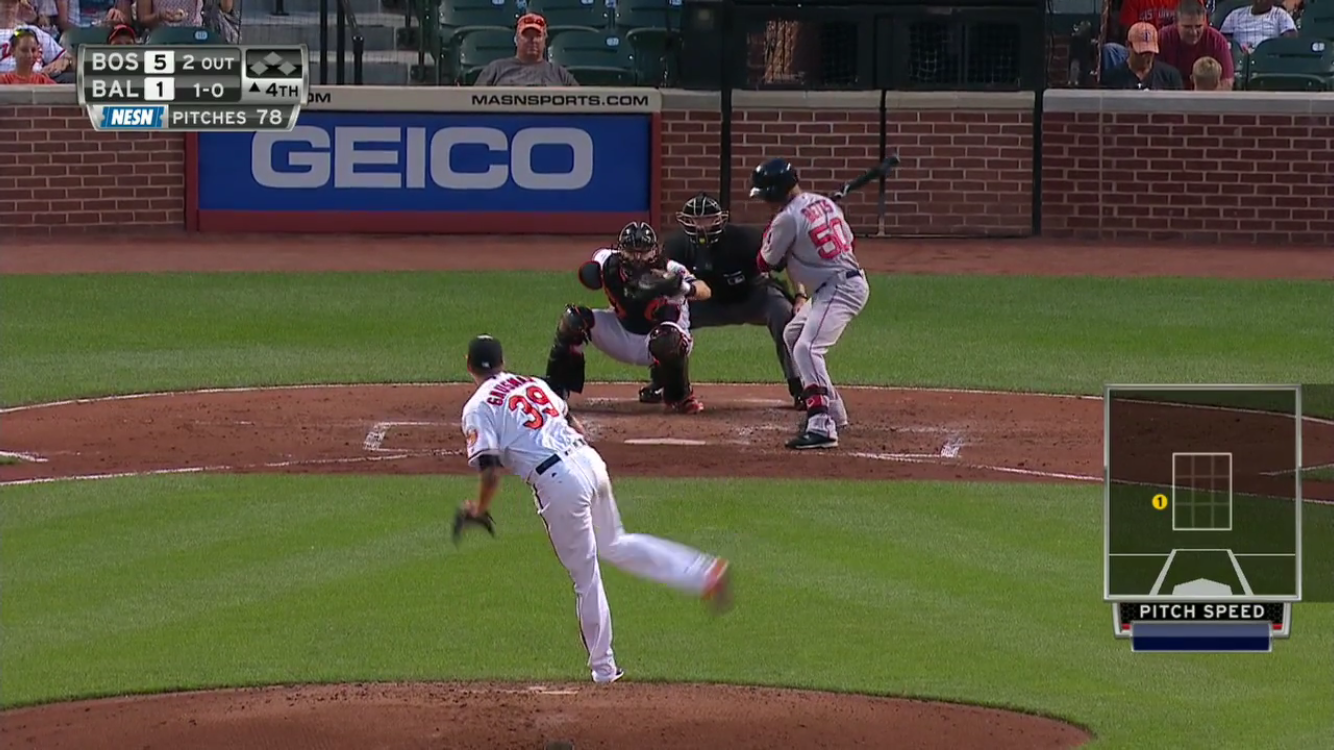 Huh, said Mookie, and the count became 1-1. The next pitch came in to pretty much exactly the same location for strike two, and now Betts was really thinking. One of the things he was thinking, I’m guessing, is “One more of those, and I’m toast.” Gausman, for his part, was thinking too. That’s the beauty of baseball. The next pitch was meant to be a lot lower than it was. Here’s where Joseph set up: 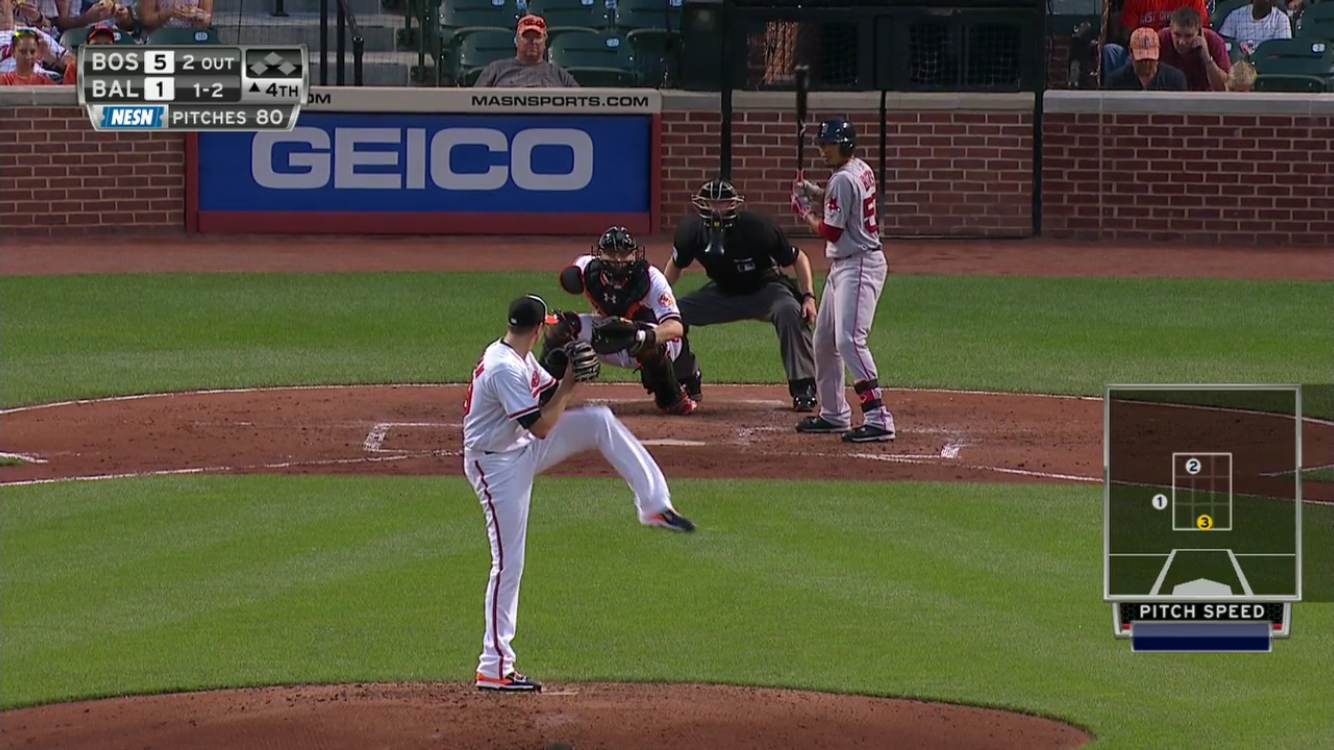 And here’s where the pitch crossed the plate: 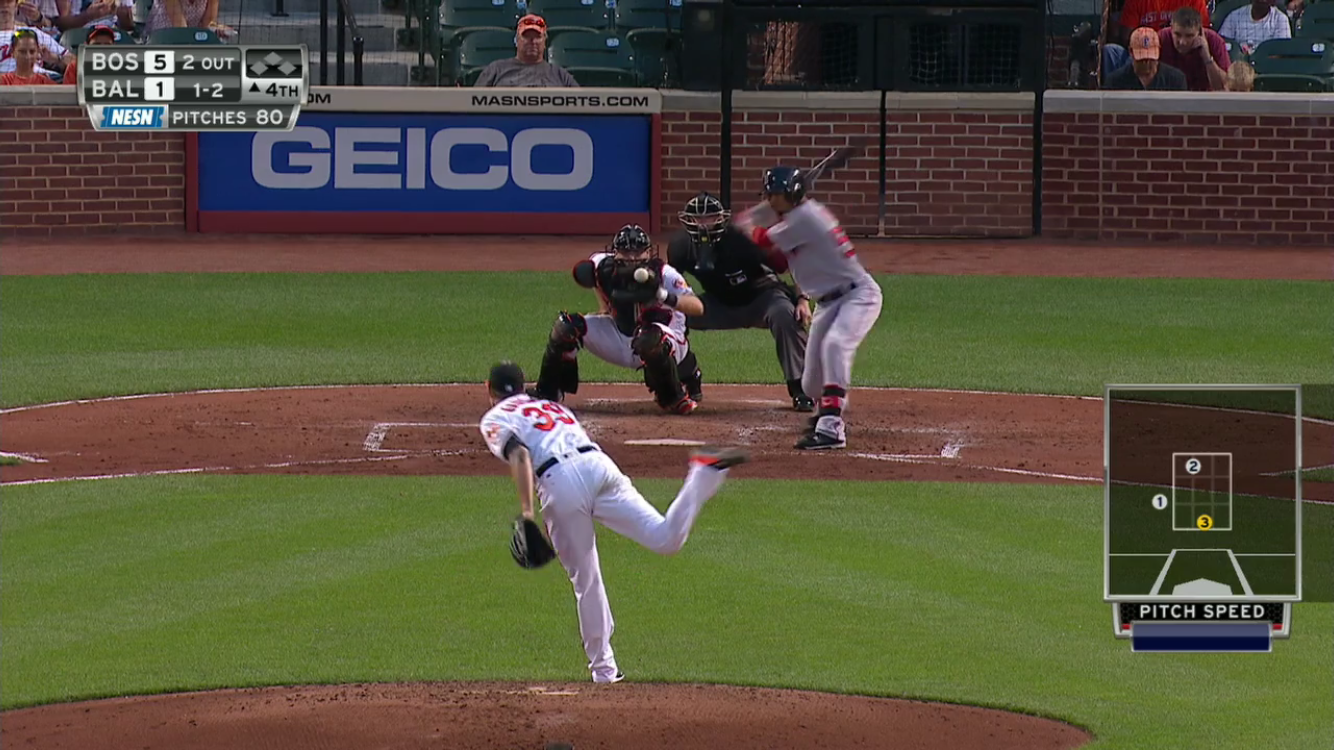 I’m guessing Betts was swinging either way, on anything that appeared close, and in any event he did swing, albeit a little late in the process. It was a reactive swing, when it comes right down to it, and he ended up hitting the ball right at second baseman Jonathan Schoop, who caught it easily and ended the inning.

That’s one plate appearance. We’ll come back to it. The second of Betts’ outs that night came in the ninth inning, against Ashur Tolliver, and after he’d hit yet another home run. Betts didn’t look like he was fully ready for the first pitch of the sequence, which was a chest-high fastball out over the outer third of the plate, and he decided to swing really late in the pitch’s trajectory. 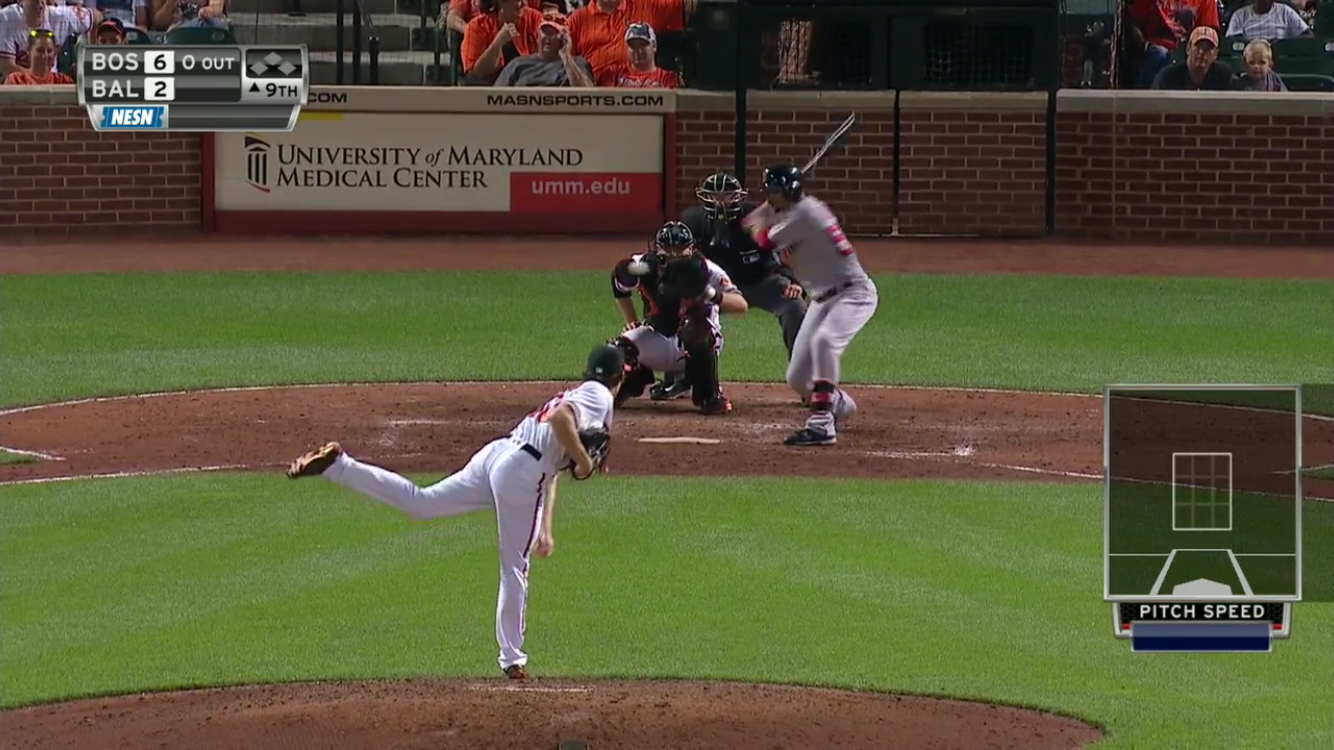 When he did swing, too, he just sort of flicked the ball foul, not harming himself particularly (the pitch would have likely been a strike) but also not doing himself many favors. It wasn’t the kind of foul ball that scares pitchers, even ones with names like Ashur Tolliver. Betts stepped back, adjusted his helmet, and took the next pitch—another fastball, this one down and in—all the way, earning himself an even count in the process. The third pitch, which came hot after the second, was also a ball (a little bit outside), and so Betts found himself in a 2-1 count against a pretty mediocre fastball pitcher. That’s the good kind of count. 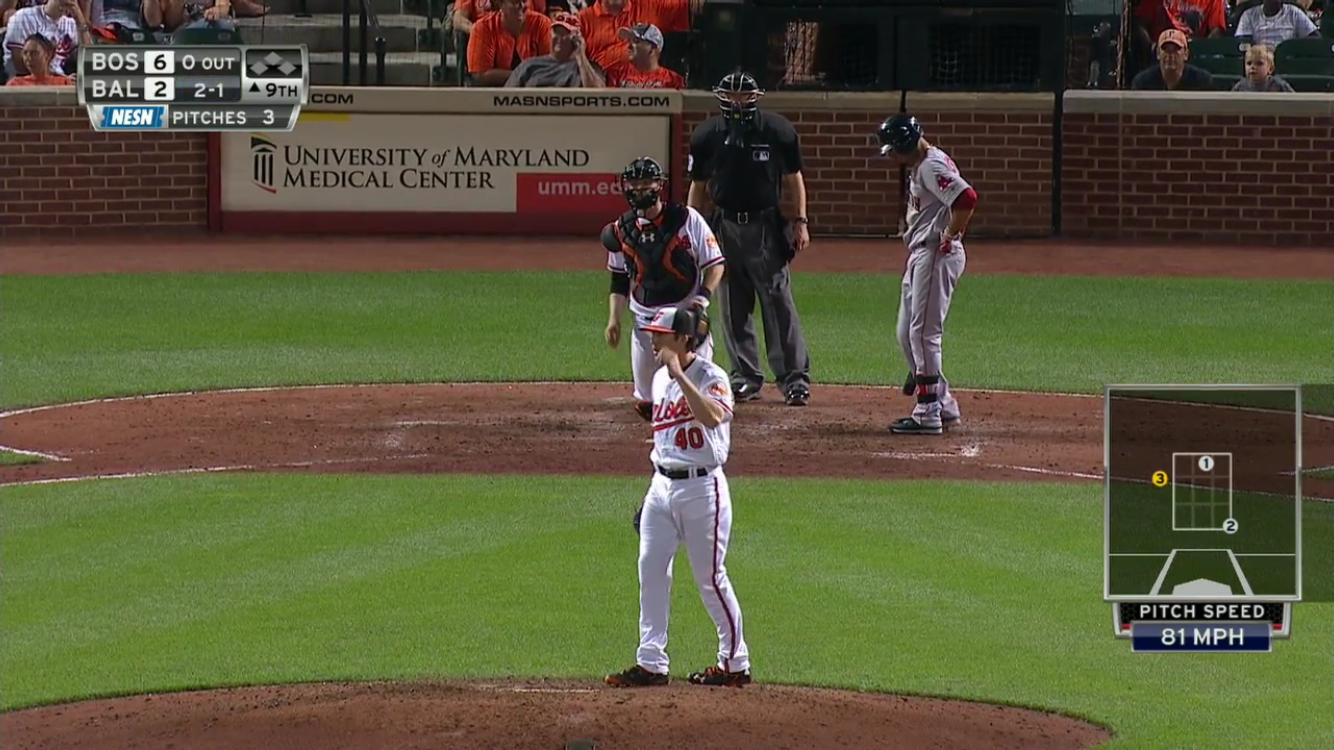 Here he is, hand on his hips after the 2-1 count, thinking about the nasty things he wants to do to the next pitch. At this point, again, he already had three home runs, and a fourth would have set the Red Sox single game record. The fourth pitch was a breaking ball. It wasn’t in the zone, or even particularly close to it, although it did start its life out approximately where the third pitch had ended up. That’s probably what got Betts to stick his arms out and do this: 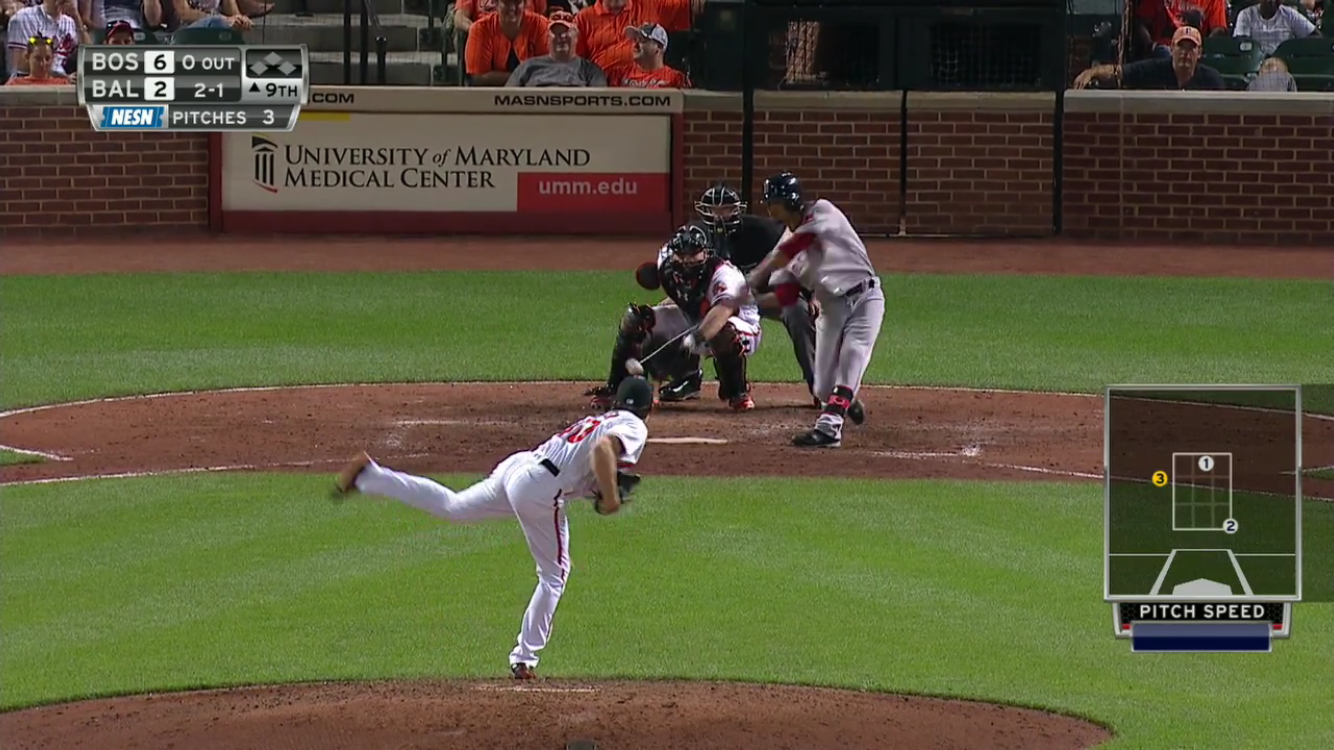 And just like that, he was out. A slow groundball to the right side of the infield, an easy play for Jonathan Schoop (again!), and an out to end the inning. He’d homer twice more the next day, in his first two plate appearances, but to me those are less interesting than the two we just talked about.

They’re interesting because nothing in particular went wrong for Betts in either of them. He swung a little late, sure, on the two pitches he put into play, but the first one was hit hard and the second, at the very least, wasn’t rolled-over on. They were, in short, perfectly fine baseball plays made by a perfectly fine baseball player. They just weren’t home runs, like the five plays that surrounded them. And yet they were the ones that made those home runs special.

In order to hit a home run in the major leagues, even just once, a fantastic number of things have to go right. You have to be able to react to a pitch moving tremendously fast. You have to coordinate your muscle, and nerve, and sinew, to get the thin wooden bat you’re holding to meet that pitch in a mutually agreeable location. You have to imbue that meeting with enormous strength, and angle, and snap. You have to hope that you hit the ball to the right part of the park. You have to do a lot of things, in short, that are wildly improbable in isolation and even more unbelievable in concert.

Most of the time, it doesn’t work. Most of the time, you hit a groundball to the second baseman.Sometimes, some very rare times, it all goes right and you hit a home run. For Mookie Betts this week, it all went right five times in seven tries, which is ludicrous on a level that’s hard to fully appreciate. But don’t look for understanding on the side of the penny. Look for it in your memory and you’ll see there, every time, the penny falling as normal, to lie flat on the the ground.

Reply to bhacking
ErikBFlom
Were they E6-E9-E3-E2 home runs like I used to get?
Reply to ErikBFlom
bhacking
Yes, the other key was to hit it to the outfielder that was busy picking dandelions.
Reply to bhacking