A good Johnny Cueto start can be segmented off into stages. Allow Cueto to maneuver unencumbered through too many of them—maybe five or six—and, as the opposing team, you suddenly find yourself sitting in the clubhouse after a 2-1 loss answering questions about the opposing pitcher’s quirks.

Here are the nine stages of a good Johnny Cueto start, which also happen to correspond to the innings he threw against the Padres recently.

Stage 1: The Shake
It’s the first pitch of the game. Presumably Johnny Cueto and his catcher, Buster Posey, have had all afternoon to decide what they want to throw Travis Jankowski to start things off. Naturally, instead of delivering the pitch without a sign, Cueto shakes off Posey—not once, not twice . . . three times. It’s the first pitch of the game, and if you weren’t already aware, you now know that Johnny Cueto is pitching tonight.

There’s a chance that Cueto and Posey simply weren’t on the same page. There’s a better chance, however, that this was just Cueto’s way of marking his territory.

Stage 2: The Slider
Cueto threw 42 sliders this outing, which, according to Brooks Baseball, is the most he’s thrown in a game since 2010. Not surprisingly, his slider can hardly be classified as a single pitch.

Both tagged sliders, both different—yet both effective. Cueto got 10 called strikes on his slider, five whiffs, and 12 of 13 outs when it was put into play.

Stage 3: The Delivery
Ignoring pitches from the stretch, Cueto offered two basic deliveries for most of the night. One, a conventional wind-up with an abbreviated finish, looked something like this:

The other, Cueto’s patented twist, is showcased here:

Cueto varied his deliveries all night without a discernable pattern, going with his “conventional” offering 62 times while twisting and turning 24 times. He started off the game flipping between both styles for the first six pitches before settling into a steady diet of conventional deliveries with twists sprinkled in without warning.

Then, in the seventh inning, he introduced a wrinkle . . . the pause.

Stage 4: The Stretch
If you’re ever in doubt about the impact pitchers have on the running game, check out Cueto’s numbers. In his nine-year career, he’s posted stolen bases against stats that would flatter an oft-injured LOOGY, surrendering just 28 steals in 70 attempts. In 2012 he allowed a single successful steal in 10 tries. Last year only five base runners ran on Cueto in 212 innings, and that wasn’t even his career-best in attempted stolen base stinginess (4, 2013).

In the 4th inning, a Melvin Upton single put a baserunner on board against Cueto, forcing him to dust off his stretch move for four pitches.

Buster Posey owns a career caught stealing rate of 33 percent, so he doesn’t need any help—shoot, even a hapless thrower like Hank Conger would probably look like a reasonable Johnny Bench knock-off with Cueto as his batterymate. It was clear at this point that if the Padres did get any more runners on, those runners were going to remain tethered to their respective base until a batted ball or walk allowed them to proceed safely.

Stage 5: The Economy
Cueto threw just 11 pitches in the fifth, a frame that was sandwiched between two other 11-pitch innings. He threw eight pitches in the first, 11 in the second, 15 apiece in the third, eighth, and ninth, and a game-high 20 in the seventh. Not exactly Maddux-like, sure, but economical nonetheless, particularly in an era when everyone’s racking up high pitch counts in search of more whiffs. Cueto threw strikes on about two-thirds of his pitches, worked to contact while pounding the zone, and ended 15 different at-bats in three pitches or fewer. Oh yeah, he also struck out eight.

Complete games are on the endangered list for numerous reasons, but don’t tell Cueto. He’s thrown eight of them since 2014 after tossing just six in his first six big-league seasons.

Stage 6: The Defense
With two outs in the sixth, Matt Kemp hit a chopper toward third. Here’s what it looked like when Cueto got to it, at which point third baseman Matt Duffy was probably hollering some form of “eat it:” 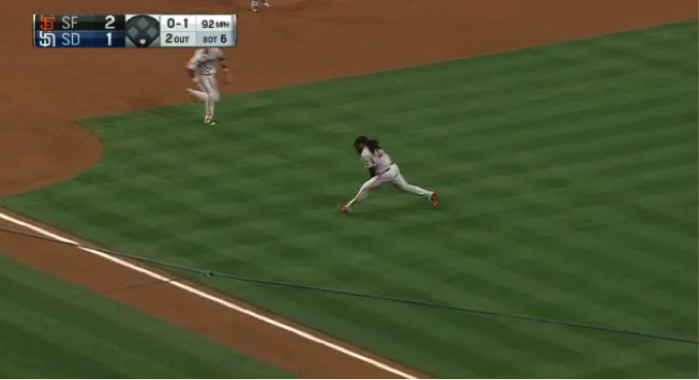 Stage 7: The Shake (part two)
It’s the seventh inning of the game, and if you forgot who was on the mound, you’re reminded that it’s still Johnny Cueto after he shakes off Posey three more times before his catcher even puts down a sign.

Stage 8: The Velocity
If there were any questions about whether Cueto would finish what he started once the eighth began, he answered them with his 13th pitch of the inning—and his 100th pitch of the game.

That 2-2 fastball traveled 95.65 mph, according to Brooks Baseball, and registered as Cueto’s fastest pitch of the night. It was over 4 mph faster than the first four-seamer Cueto threw, way back in the second inning. In fact, his nine fastest pitches all came in the game’s final three innings. That’s all a bit weird, but at this point, it doesn’t feel so weird because weird is kind of Cueto’s thing.

Stage 9: The Shimmy
The Padres survived the first eight stages of Cueto with a fighting chance, trailing 2-1 entering the bottom of the ninth thanks to a solid night from Drew Pomeranz and the bullpen—the not-so-economical Pomeranz lasted just six innings on 107 pitches.

Then Cueto delivered the death knell—his patented shimmy—on pitch No. 113.

The Padres would not survive the ninth.

You need to be logged in to comment. Login or Subscribe
Clemente
Thank you for the fun and interesting article.
Reply to Clemente
dutt22
Thanks, that's much appreciated.
Reply to dutt22