The Monday Takeaway
It’s been rocky sledding for Matt Harvey in recent weeks, especially his last three starts, when opponents hit the right-hander hard and often, to the tune of 27 hits—four of them homers—in 13 1/3 innings. That wouldn’t do on Memorial Day, not with Jose Quintana continuing a breakout season that’s seen him emerge as one of baseball’s elite left-handed starters. And to the great thrill of the fans in attendance at Citi Field, the Matt Harvey they’ve come to know and love returned and proved up to the task.

The task was this: Keep the White Sox off the scoreboard through the seventh-inning stretch, because Quintana would lock down the Mets for the better part of the afternoon. Challenge accepted:

With his fastball averaging 96 and bumping 99, Harvey attacked the zone

and the South Siders were impressed. Thirty-three of Harvey’s 42 four-seamers went for strikes, including a half-dozen swings and misses, the bulk of his 10 total whiffs on the day. Harvey rarely misfired by more a few inches, getting 21 outs on 87 pitches, 61 of them strikes, while permitting just two singles and a walk. He struck out six.

At that point, there was still the small matter of the Mets needing a run against Quintana. Without it, Harvey’s bounce-back effort would all be for naught. Enter Neil Walker:

That solo shot made it 1-0 Mets, before the home nine squandered a chance to add on. Wilmer Flores followed with a double, but Alejandro De Aza popped up the ensuing bunt attempt. Then, after Rene Rivera drew a walk, Ty Kelly flied out, leaving Terry Collins to decide whether to milk another inning out of Harvey or use a pinch-hitter in hopes of expanding the lead. He chose option 2, sending Eric Campbell to the plate, only to watch him pop out to end the inning.

Luckily for the Mets, while Harvey was through, they had another pitcher itching for a rebound in closer Jeurys Familia, who endured a rough weekend at the hands of the Dodgers. After Addison Reed held the line in the eighth, Familia slammed the door in the ninth, picking up his 17th save with a clean, two-strikeout frame.

The story in this one, though, was Harvey, who, at least for one holiday Monday, was back to peak form. Now, as the right-hander said himself, the question is whether he can build on the fine outing his next time out. Harvey will look to answer that Sunday in Miami.

Quick Hits from Monday
The Dodgers and Cubs kicked off a high-profile series at Wrigley Field on Memorial Day, and the story of this one was wood, Jerry, wood:

The winner was Wood and the loser was Wood. And good wood was also what the Dodgers struggled to put on the ball. While Alex Wood started for the Dodgers and struck out seven in five innings of two-run ball, Travis Wood came on in relief for the Cubs, after hamstring cramps forced Jason Hammel out of the game. Hammel left unscored upon, but he did give up a two-out single to Justin Turner in the top of the first. As it turned out, that would be the Dodgers’ only knock of the day.

Wood and three teammates saw to that, but the southpaw’s relief effort was notably impeccable. He faced 12 batters and retired them all, four via the strikeout, on just 43 pitches, only eight of which were balls. According to the Baseball-Reference Play Index, that makes Wood the first Cubs reliever to toss four or more innings of perfect relief since Randy Martz did it on April 18th, 1982, and the ninth pitcher to do it in the organization’s long history.

The Cubs scored twice in the fifth inning, and that would do it for the offense in this tidy, 2-0 affair.

Stop the presses: The Braves have won three of their last four home games!

After entering play Friday with a dismal 2-20 record at Turner Field, the Braves, now managed by interim skipper Brian Snitker, took two of three from the Marlins and grabbed game one of their set from the Giants.

A wobbly Jeff Samardzija gave up five runs to the punchless Atlanta offense in the first three innings, three of them on this bases-clearing triple by Mallex Smith:

Braves starter Mike Foltynewicz said, “Thank you very much, I’ll take things from here.” As our own David Lee pointed out, the key for the 24-year-old right-hander is consistency with his breaking stuff, particularly establishing both his curveball and slider in the same game:

@mlbbowman Commanding multiple pitches in the same game is huge for him. Perhaps his biggest developmental step if he can repeat it.

Throwing 10 of 11 curves and 11 of 14 sliders for strikes Monday qualifies as a highly encouraging sign:

With mid-to-high-90s heat accompanying those two spinners, Foltynewicz limited the visitors to a run on three hits in six innings, the lone blemish a solo shot by Brandon Belt. The Giants rallied late, scoring twice off Arodys Vizcaino in the ninth, but the Braves held on, 5-3.

Dueling perfect games are always fun, and on Monday night, Justin Verlander and Jhoulys Chacin provided it for four-and-a-half innings. Then, after the first 27 batters of the game were retired in order, C.J. Cron spoiled the fun,

punching a hanging curveball from Verlander into right field for a leadoff single. He’d be stranded at third, though, and the Tigers didn’t get a baserunner against Chacin until there were two down in the sixth. Andrew Romine and Ian Kinsler turned in back-to-back singles to snap the perfecto, but they, too, were left aboard.

The scoreless duel held until the last of the eighth, which began single-single-single, the last of those an RBI knock by Cliff Pennington. A sacrifice bunt advanced two runners into scoring position, and then, a terrific stop by Romine turned into a two-run goat rodeo on a disastrous throwing error by James McCann:

Anaheim would end up scoring five times in the inning, rendering the Tigers’ one-run counter in the top of the ninth moot. Chacin went the distance, striking out 10 on 114 pitches of fantastic work to earn his first nine-inning complete game since April 15th, 2011.

Not bad for a pitcher the Halos acquired some three weeks ago for a 23-year-old in A-ball.

Jeff Locke also went nine on Monday, and his complete game was a shutout. A three-hitter, to be exact, in which the Marlins whiffed just six times but struggled mightily to poke holes in the Pittsburgh defense.

Credit Locke and battery-mate Francisco Cervelli for expertly mixing his two-seamer and changeup, the latter of which consistently found the lower half of the strike zone, where the Fish couldn’t do much damage. Locke was tremendously efficient for the first seven frames, completing each of them without exceeding 13 pitches, before needing 31 total to finish the eighth and ninth.

He’s the first Pirates pitcher to notch a shutout with one or fewer strikeouts since Paul Maholm blanked the Astros on July 18th, 2010. A sixth-inning grand slam by Gregory Polanco

It was 3-2 A’s when Joe Mauer stepped to the plate in the top of the seventh with two men in scoring position and two away. It was also 3-2 A’s at the conclusion of their series opener against the Twins. Which makes this snag by Yonder Alonso a game-saver for Oakland in the series opener:

Day baseball on a Tuesday? Hey, we’re not complaining. There are two matinees on the slate today, beginning simultaneously, with the Astros visiting the Diamondbacks and the Padres taking on the Mariners.

We’ll zoom in on the former, and in particular on Houston starter Lance McCullers, who’s developed quite the affinity for spinning curveballs. McCullers has thrown more benders than fastballs in each of his last two starts, but the more noteworthy fact about the curve might be this: 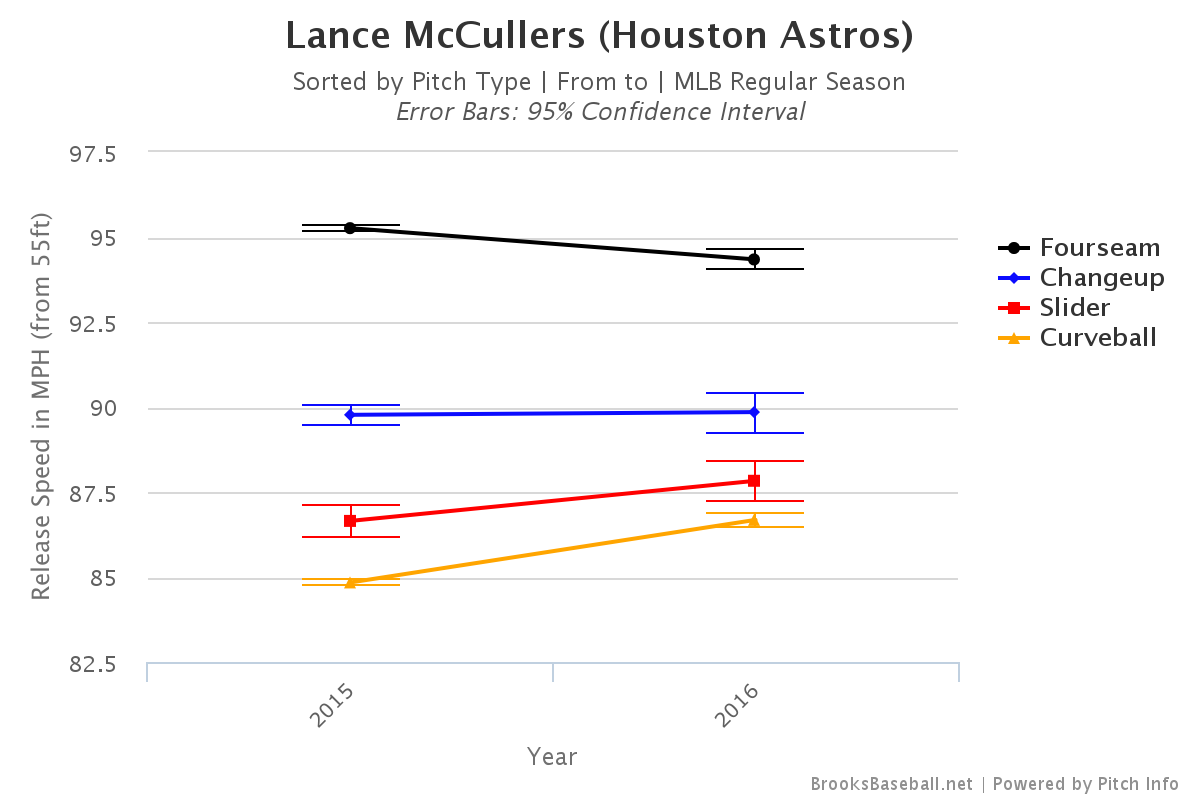 Often, a pitcher’s velocities move in lockstep, with a decline in one offering matching that of another. That’s not the case for the 22-year-old Astro. While McCullers’ average fastball is down about a mile per hour from 2015, his curveball is up nearly two full ticks, from 84.8 mph to 86.7 mph. And, not surprisingly, that hasn’t made it any easier for opponents to hit. They’re just 5-for-36 (.139 average) with 20 strikeouts in at-bats terminating with the curve this year. So, if you’ve got some free time at the office today and a hankering for some nasty hooks, McCullers if your man (3:40 p.m. ET).

And if McCullers doesn’t satisfy your breaking-ball appetite, flip over to the Pirates-Marlins tilt a few hours later, and you’ll find the on-paper duel of the day. It’s Gerrit Cole and Jose Fernandez, the latter of whom has already recorded 62 punchouts with his curveball this year. Fernandez has racked up double-digit Ks in three of his last four starts, and he hasn’t permitted more than one run in any of those outings, holding opponents to a .191/.262/.287 slash line along the way. Cole, meanwhile, has held foes to a run or less in three straight trips to the bump, but he’s still searching for his first 10-plus-strikeout effort since last May 22nd. The Bucs have won six of their last seven behind their ace, while the Fish are unbeaten in Fernandez’s last half-dozen (7:10 p.m. ET).

Finally, when you’re setting up your defense for Brian Dozier’s at-bats, it increasingly appears that having a traditionally positioned second baseman is optional: 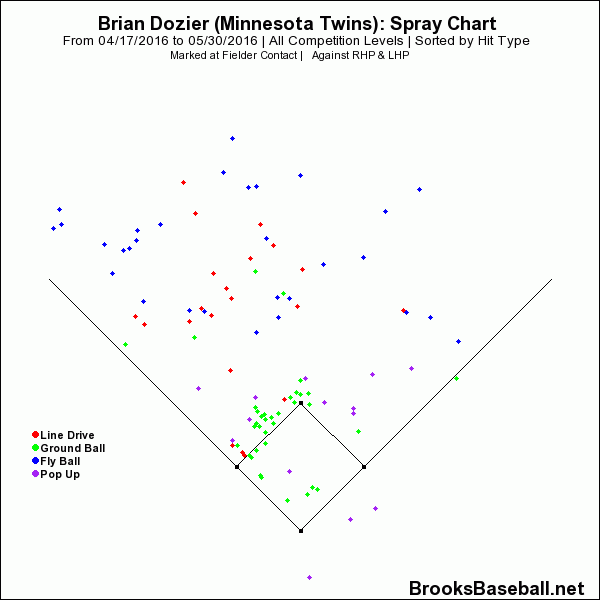 Outside of the occasional popup, Dozier just hasn’t hit the ball into the keystoner’s territory in the last month and a half. The Twins second baseman has the lowest opposite-field batted-ball rate in the majors, at 12.6 percent, and the predictability in his spray chart might be one reason why his BABIP is just .222. He’ll look to poke some holes through the A’s defense this evening, when Tyler Duffey faces Eric Surkamp at the Coliseum (10:05 p.m. ET).

Based on a quick Play Index run, it appears the answer is August 21, 2014. The four starters that day were Dallas Keuchel, Tyson Ross, David Price, and Brandon McCarthy.

Now, the last time four starters so unlikely to throw a CG came together and did it on the same day... I'm sure it's been a while.
Reply to statsrath
oldbopper
Thanks for the answer. I did not expect the answer to be back when I was watching Jack Lamabe pitch for the Red Sox but I am a little surprised it is so recent. It just seems like such a rare occurrence that if it isn't too much trouble could a list be gathered from perhaps 2010 of the times it has occurred?
Reply to oldbopper
statsrath
Sure thing...