Of the dozens of baseball statistics out there, Win Percentage Added might be my favorite. It’s a lovably useless stat: entirely beholden to timing and fortune, it ignores ill-timed greatness and throws favor on the man at the right place at the right time. It has almost no predictive value, and carries a faint whiff of the hero worship of days past, the old men talking of clutch performance. It’s the sophisticated remake of the Game-Winning RBI, a hack writer’s game recap in decimal form. As game stat, WPA isn’t particularly fair; in that sense, it’s the stat most like real life, when we’re measured by moments not of our choosing.

However, from a career standpoint, talent has time to reassert itself. A glance at the leaderboards will provide all the names you’re used to seeing on the top of leaderboards. In this sense it’s more optimistic than anything else: proof that given enough time, heroes will have chances to display their heroism. WPA quantifies that heroism in a pleasant way.

Thirty-five years ago, in the 1981 Baseball Abstract, Bill James established a formula he called his “Favorite Toy.” Using past performance to project future production, modified by the estimated number of years left in a player’s career, it spat out the odds that a player would reach a given milestone one, five, or 10 years down the line. It’s an exceedingly rough estimate, one strikingly similar to the Marcel projection system, and equally infuriating in its relative accuracy.

Milestones don’t quite carry the same weight they did in 1981—we’ve succeeded in shaking at least a little of the hypnotic power of base ten—but there’s an undeniable pleasure in anticipating the achievement of a career-long record or benchmark. It serves as a rare punctuation mark in a sport that often feels like a William Faulkner sentence. And while we currently find ourselves with a relative dearth of lifelong accomplishment on the horizon, it’s still fun to count down to greatness. As with Christmas and Star Wars movies, the waiting is generally the best part.

MPA (milestone percentage added) is my simple re-working of the Favorite Toy, incorporating the incremental adjustments of a Win Percentage Added chart. PECOTA’s playing time and performance projections on a daily basis are run through a binomial calculator, with a number of “successes” based on the milestone being chased, and the odds spat out are our value. The question can be phrased as this: Given that we expect player A to do something B times, based on a normal distribution, how likely is it to expect him to do something at least C times instead? With this formula, we can track each player day by day, to see how a strong or weak performance has affected his odds, just as you would with a game chart or a playoff odds simulator.

First, a chart for MPA for the biggest chase of the summer: Ichiro’s quest to reach 3,000 hits this year. 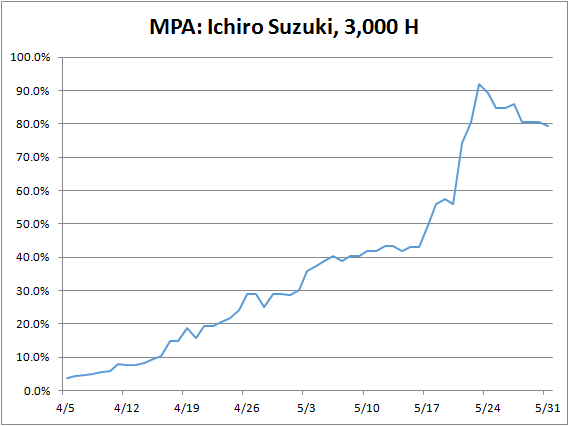 A couple of notes: First, it should be noted that Ichiro’s small-sample rejuvenation, and the nagging injuries of Christian Yelich, have caused PECOTA to alter its preseason prediction of 178 plate appearances to jump up to 228. Those extra plate appearances have been smoothed out over the course of the early season, accounting for some of the slow ascent of his odds. Second, readers might correctly note that these odds are fairly heavily based on conjecture. All things are! But it’s particularly noticeable that we’re missing two contingencies: one, that Ichiro might want to play another year and find someone who lets him, and two, that if Ichiro were to find himself on the edge with the season waning, the team would find a way to get him all the plate appearances he needed.

We’ll have to live with these known unknowns. After all, like its cousin, MPA isn’t necessarily about predicting the future; it’s about appreciating the present, particularly in the case of a 42-year-old fourth outfielder whose chance at 3,000 was, eight weeks ago, considered quite remote. But on the day of that magical 3,000th hit, hopefully an infield single, we’ll also pause and remember the even more magical three days in late May when he went 10-for-14, and shed most of the doubt.

Meanwhile, another player with life goals to achieve, who’s had a slightly harder time: 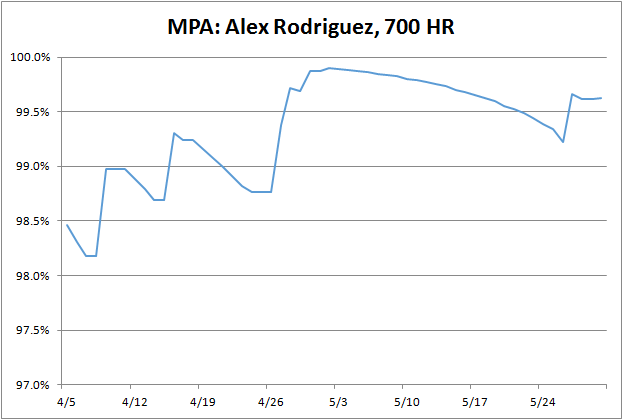 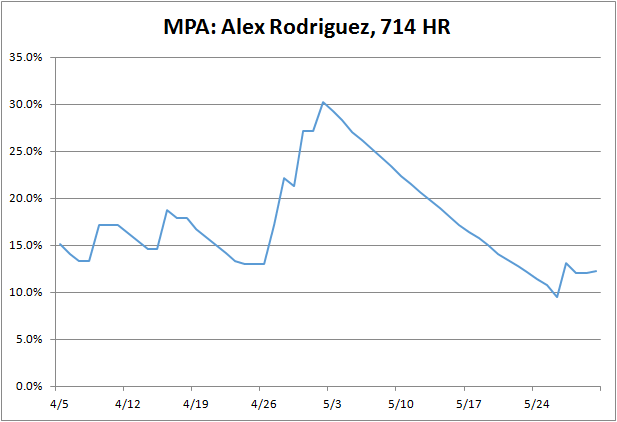 Rodriguez’s lengthy recuperation hardly put a dent in his chase for 700 home runs, because he’s so close that he could run a dizzy bat race before each time up and still reach it. But his hope of catching Ruth in 2016 collapsed, leaving it likely that it’ll be an element in his 2017 retirement tour, such as it is. It’s not impossible; his chances are about the same right now as calling a number and then rolling it on a six-sided die.

If I were somehow bestowed complete omniscience, I would stave off the madness and the boredom by appreciating the odds of the future happening. It’s the ultimate dream of game theory: not to know the future, but to know the exact odds and the exact payoffs that lead to every strategic decision, every rise to unexpected greatness. It’s easy to appreciate the exact moment of achievement: that’s what gives us the classic calls of walk-offs, pitchers with arms raised, tackled by exultant catchers. But while those are great moments, those aren’t the only moments. We should also celebrate not the endings, but the reversals and origins that might prove pivotal on some unknown, future day.