The Thursday Takeaway
With the power-packed but whiff-happy Astros and Orioles squaring off this week, strikeouts were sure to be a-plenty at Minute Maid. Suffice it to say that the Astros’ arms held up their end of the bargain.

After Houston struck out 19 Baltimore batters in the opener and 18 more in the middle match, Lance McCullers took it upon himself to bring his team into record territory. The right-hander was effectively wild Thursday,

making his catcher, Jason Castro, work hard to block a slew of pitches below the zone. Castro was charged with one passed ball, but otherwise performed admirably, as his battery mate chucked 43 fastballs, eight changeups, and a whopping 57 knuckle curves. But hey, when the hook in question is falling off the table like this,

why wouldn’t you go back to it every chance you get?

The O’s came up empty on 16 of their swings against the breaker, as McCullers used 10 strikeouts to overcome six walks by allowing just one hit, a Mark Trumbo homer in the second. Those 10 punchouts gave Houston 47 for the series, matching the major-league record for a three-game set.

But at that point, this game was only in the fifth inning. And before his teammates got back to the record-setting quest, George Springer, who’d already launched one big fly in the game, had some more yard work to do:

And in this case, by yard work, we mean clearing the yard all together on a payoff pitch from Kevin Gausman, who’d served up just three homers in 36 2/3 innings before the Astros doubled his tally tonight.

With the score at 4-1 Houston, A.J. Hinch turned things over to his bullpen, calling upon Michael Feliz, whose 5.00 ERA made him seem an iffy candidate to preserve the lead, but whose 29 strikeouts in 18 innings made him an outstanding choice to enter the Astros into the record books. Feliz took care of business quickly, fanning Jonathan Schoop, the second batter he faced, before racking up three more Ks in his two total frames on the bump. In 15 2/3 innings since a brutal, four-walk, two-homer beatdown on April 6th, Feliz has punched out 29 without issuing a free pass.

Will Harris and Ken Giles wrapped this one up, with the former adding one more punchout to the total while the latter came up empty in that regard. Hence, the Astros totaled 15 strikeouts in the 4-2 series-finale victory. And now it’s time for a little arithmetic: 19 + 18 + 15, carry the 2, that’s … 52 strikeouts, your new major-league record for a three-game series.

The sweep of the Orioles also helped the Astros back to an even .500 record at Minute Maid—where they’re now 13-13—and to 20-28 overall. Hinch’s club, a preseason pick to contend, still has a mountain to climb in the AL West, sitting in a tie for last place and nine back of Seattle. But the Astros have something to build on now, as they hit the road this weekend, with 14 of their next 19 to be played away from home.

Quick Hits from Thursday
Entering their matinee yesterday, the Marlins had only once scored more than seven runs this season, way back on April 11th, when they topped the Mets 10-3. With a left-hander on the mound for the Rays Thursday, manager Don Mattingly sat not only the slumping Giancarlo Stanton but also Justin Bour, slotting Cole Gillespie in the fifth spot and Chris Johnson sixth. So, naturally, the Marlins went out and dropped nine runs on Drew Smyly and their cross-state rivals, taking both road tilts in a home-and-home series that ended 3-1 in Miami’s favor.

As it turned out, two runs would’ve sufficed Thursday, because Jose Fernandez had the Rays on lockdown. The Fish swam ahead 3-0 in the top of the second on a one-out double by Derek Dietrich, an RBI single by Miguel Rojas, and this two-run big fly by Adeiny Hechavarria:

Fernandez took over from there. The right-hander came in with a 60 cFIP, second in the majors behind Clayton Kershaw, and he justified the faith of our predictive metric with a dozen strikeouts in seven innings of one-run ball. Using primarily a two-pitch mix, with 62 fastballs and 40 curveballs in his 111 deliveries, Fernandez amassed 21 swings-and-misses to tie the franchise record with his 13th double-digit-strikeout game. The Rays couldn’t handle the upper-half fastballs or the benders near the lower glove-side corner, 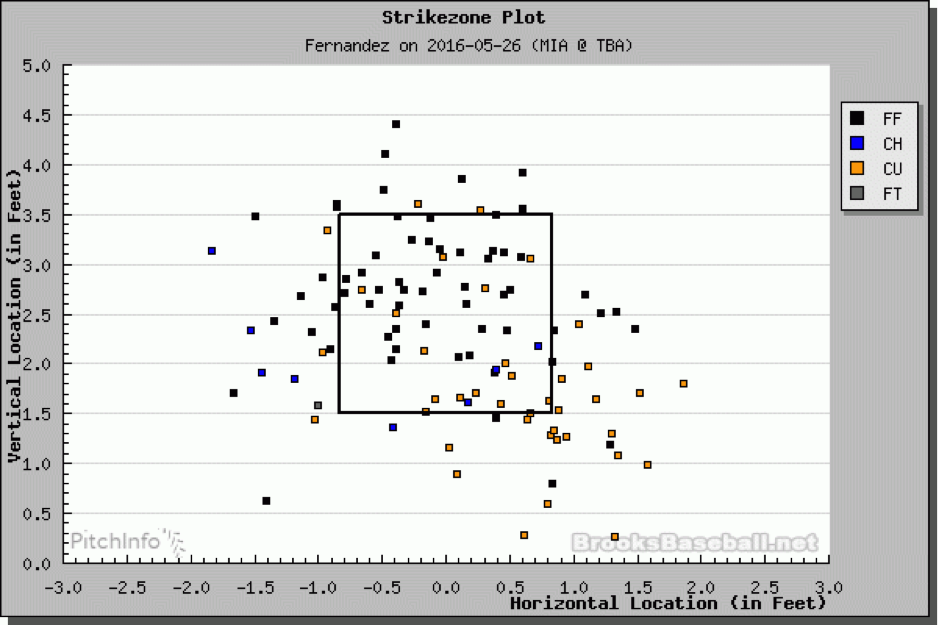 and with Fernandez commanding the ball well enough to keep hitting those spots, it was game over when Hechavarria’s blast cleared the fence. The Marlins went on to win 9-1.

Carlos Beltran had four at-bats in yesterday’s game against the Blue Jays, and all of them ended the same way…

…with a whiff. That’s 0-for-4 with four strikeouts, a plight better known as the golden sombrero. And that’s not a hat that Beltran has often worn. In fact, out of 2,352 career major-league games, this was just the third in which the outfielder went down swinging or looking four times. The previous two both came against the Yankees, on September 6, 2000, and June 28, 2008.

This time, the Yankees had to overcome Beltran’s rough day at the plate, and that, they could not do. CC Sabathia did his part, tossing seven brilliant innings, but a Didi Gregorius error led to two unearned runs in the third, and the Yankees never recovered.

J.A. Happ went seven, too, giving up just one run, a solo homer by Starlin Castro. Gavin Floyd and Roberto Osuna finished off the 3-1 win for the Jays.

Jackie Bradley Jr. also had four at-bats Thursday, and all of his also ended the same way: with not-hits. That means his hitting streak is over at 29 games. It ended with Bradley standing in the on-deck circle, waiting for his fifth turn, when Jake McGee retired Mookie Betts to make the Rockies 8-2 winners.

Before that, it was two-run-homer derby at Fenway Park. The Red Sox hit the first one, off the bat of David Ortiz, no. 12 for Big Papi, whose slugging percentage was .706 at night’s end. Unfortunately for the home team, though, their guests would slug the next three.

After cruising through his first nine outs on 29 pitches, Clay Buchholz watched Carlos Gonzalez go down and fetch a low curveball to draw the Rockies even at 2-2:

Given the pitch location, that long ball was, perhaps, forgivable. This one by Trevor Story…

…on a 2-2 pitch that stayed up and over the plate, not so much. And this one, by Dustin Garneau, on a fastball to the wrong side of the dish…

…yeah, that wasn’t good at all. And so, between the gopher balls and the snapped hit streak, what started as a promising night for Buchholz and the Red Sox ended in disappointment across the board. It’s not yet clear whether Buchholz will be given another chance to start.

It’s been this kind of year for Aledmys Diaz:

Batting .329/.359/.570 in place of Jhonny Peralta, with his seventh homer of the year Thursday, even when Diaz makes what would be an unsightly miscue, Yadier Molina is there to pick him up.

Alas, Diaz’s jack accounted for the Cards’ only run off Nationals starter Joe Ross, and ultimately their only run in the game. The Nats clubbed two big flies, one by Danny Espinosa and this upper-decker by Bryce Harper:

The former was the game-winner, the latter Harper’s first dinger in two weeks, as the outfielder struggles to find pitches to hit. Together, they delivered a 2-1 win for the Nats.

What to Watch This Weekend

Michael Fulmer’s first four major-league starts were fairly nondescript, amounting to a 6.52 ERA, with 22 strikeouts in 19 1/3 innings serving as the redeeming factor for the young righty. All four of those outings came on the road, however, and when the Comerica Park faithful finally got to see Fulmer—their team’s return in the Yoenis Cespedes trade with the Mets—live, he put on a dazzling, 11-strikeout show. What changed? 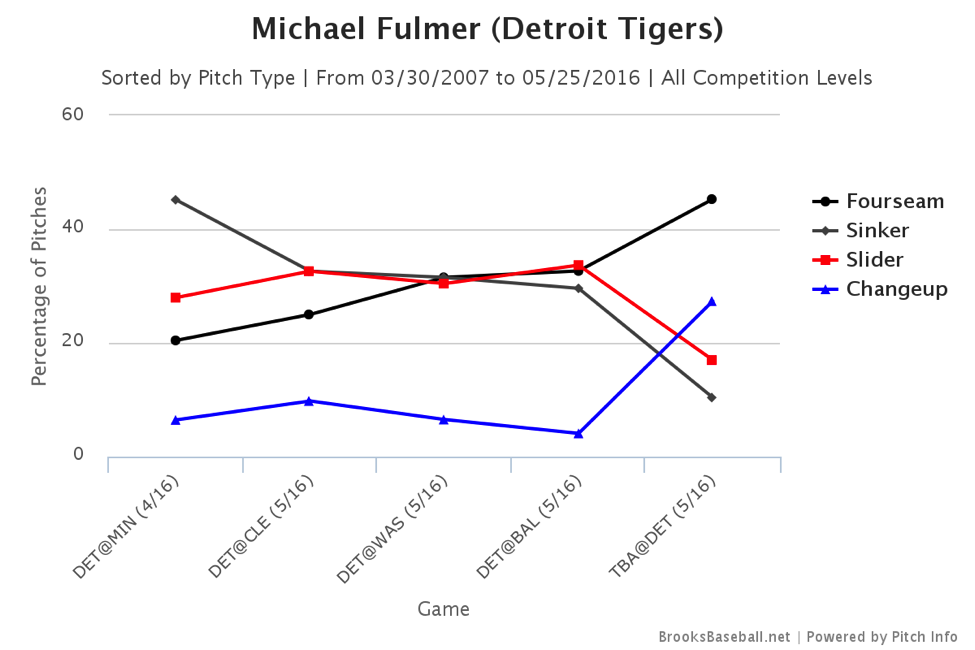 For one thing, Fulmer traded a bunch of sliders for changeups, a move that worked wonderfully, as the Rays whiffed nine times on the 29 occasions that the 23-year-old pulled the string. That’s noteworthy, because coming into the year, Fulmer’s change graded out as “fringe-average,” and our own Christopher Crawford called it “the weak link in his development,” behind a plus fastball and slider. After the game, manager Brad Ausmus said Fulmer’s changeup “was the best that I think he’s probably ever thrown.”

Tonight, Fulmer will take on a fellow blue-chip rookie in A’s lefty Sean Manaea, who came over to Oakland from the Royals in the Ben Zobrist trade last year. The Athletics are down a significant left-handed bat with Josh Reddick on the disabled list, but that might not stop Fulmer from leaning on his newfound cambio: 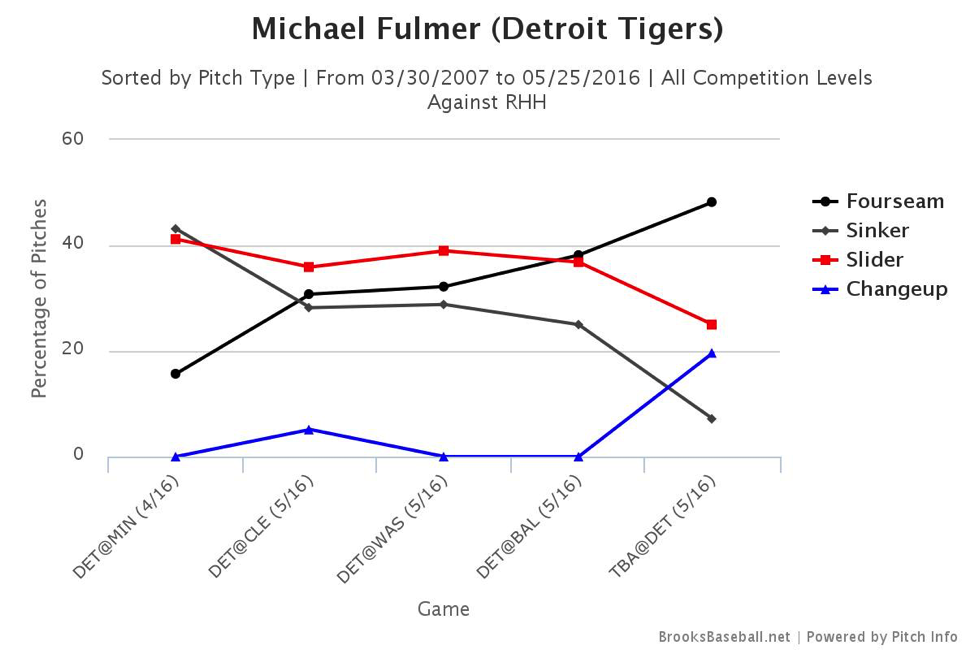 He deployed it about once every five offerings to Rays righties his last time out, chiefly at the expense of his slider, and it’s worth monitoring Fulmer’s pitch usage to see if he has the confidence to do so again tonight (10:05 p.m. ET).

Speaking of young starters, they don’t get much younger than Julio Urias, who—as we learned Thursday morning—is coming up today to face the Mets. At 19 years and 289 days old, Urias will be the most youthful southpaw to toe the rubber for the Dodgers in more than 60 years, going all the way back to Sandy Koufax, before the Mets—the club he’ll face tonight—were founded. For more on Urias, be sure to check out our Call-Up post from Ben Carsley and Wilson Karaman. Then, tune in as he duels Jacob deGrom in the series opener at Citi Field (7:10 p.m. ET).

While we’re on the subject of starters coming up from the minors, the Rangers have one, too, and he’s already accomplished plenty at the major-league level. Yu Darvish has been declared ready to return to big-league action after five rehab starts, and let’s just say that unleashing the 29-year-old on Double-A and Triple-A batters wasn’t exactly a fair fight. Darvish held those lineups to nine hits and six walks in 20 innings while striking out 21, earning his first assignment for the Rangers since August 9th, 2014.The Pirates will have the pleasure of digging in against Darvish on Saturday afternoon at Globe Life Park, where they swept the Rangers on their last visit back in September 2013. Juan Nicasio gets the ball for Pittsburgh (7:15 p.m. ET).

Finally, for fans of left-handed pitching, Sunday will offer a special treat. You get David Price facing the Blue Jays in the early slate (1:07 p.m. ET), Chris Sale taking on the Royals an hour later (2:15 p.m. ET), Rich Hill spinning his slow curve at the Tigers as those contests wind down (4:05 p.m. ET), and, well, after all that, the schedule-makers saved the best for last. It’s Clayton Kershaw on the hill for Sunday Night Baseball (8:00 p.m. ET), completing the set of lefties who rank in the top 10 in DRA to this point in the season. That’s among all starters, righty or lefty, who’ve tossed 50 or more innings, by the way, and the only top-10 southpaw left out of the Sunday slate is Jose Quintana, who’d gladly join in the fun were his teammate, Sale, not standing in his way.

You need to be logged in to comment. Login or Subscribe
jfranco77
No way Harper's bomb was 431 feet. 431 meters, maybe :)
Reply to jfranco77
oldbopper
The Mets hope Sale pitches Sunday but yesterday's rainout may push him to Monday. In which case the Mets get Kershaw as an appetizer on Sunday, Sale on Monday, then Quintana for dessert on Tuesday. Met fans will need to keep the Rol-Aids handy.
Reply to oldbopper
statsrath
Yep, forgot to go back and account for that rainout, but we'll see if the White Sox end up pushing everyone back. Thanks for the heads up.
Reply to statsrath
timber
They have said they are: