The Tuesday Takeaway
In his first nine starts, Chris Sale has been brilliant at best and close to it at worst. In his tenth start, though, he was far from either.

Sale entered Tuesday following back-to-back complete games, with just one run allowed in each and no walks in either. Against the Indians, he was at first business as usual—five strikeouts through his first eight outs, scoreless. But with two outs in the third, he started missing his spots, and Cleveland took full advantage. It began with something Sale hadn’t allowed in his last 26 innings at that point: a walk, thanks to a slider that was a bit all over the place and a Jose Ramirez who refused to fall for it. 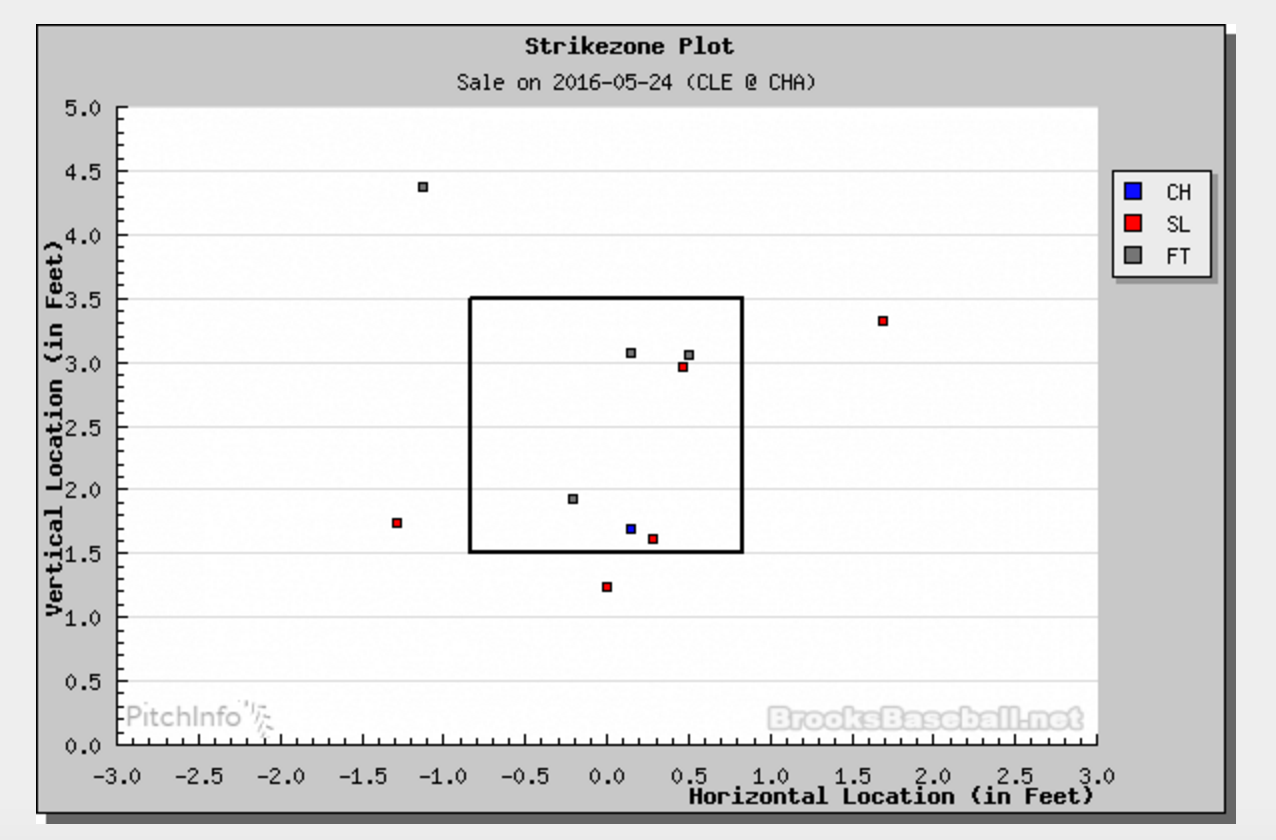 Next came a Francisco Lindor single, and then things really took a turn toward the strange—a Mike Napoli triple, complete with a clumsy head-first slide, that drove in both runners.

And the inning wasn’t over yet. A walk to Carlos Santana was next, followed by an at-bat in which Juan Uribe fouled off six pitches to stay alive before singling over the head of Brett Lawrie and driving in another run. Sale finally got himself out of the jam by striking out Marlon Byrd, but the damage had been done. After getting the inning’s first two outs on just five pitches, he had taken 38 to get the third.

But the troubles didn’t stop with Sale’s no good, very bad third inning. Just two pitches into the fourth, Chris Gimenez took him deep on a high fastball, stretching Cleveland’s lead to 4-1. Then came a walk to Rajai Davis, followed by a wild pitch, another walk and finally, the nail in the coffin for Sale’s night—a Francisco Lindor single that brought Davis home. In his shortest outing of the year, Sale was pulled with two outs to go in the fourth in favor of Zach Putnam, who struggled a bit in his own right and allowed another run to score.

There was little solace to be found in the White Sox bats, as Josh Tomlin had his best outing of the year alongside Sale’s worst. Tomlin held the Sox to two runs over eight innings of work en route to the 6-2 Cleveland win.

Quick Hits
With another ugly outing, Matt Harvey added fuel to the “Harvey is broken” fire Tuesday (if not any indication that he’ll literally burn his belongings in hopes of a symbolic rebirth). Though he managed to keep the Nationals scoreless into the fourth, he didn’t do so in a way that looked particularly promising, and things then started unraveling with a Ryan Zimmerman home run…

…and finally, in the next inning, a Daniel Murphy home run on a fastball right over the heart of the plate. 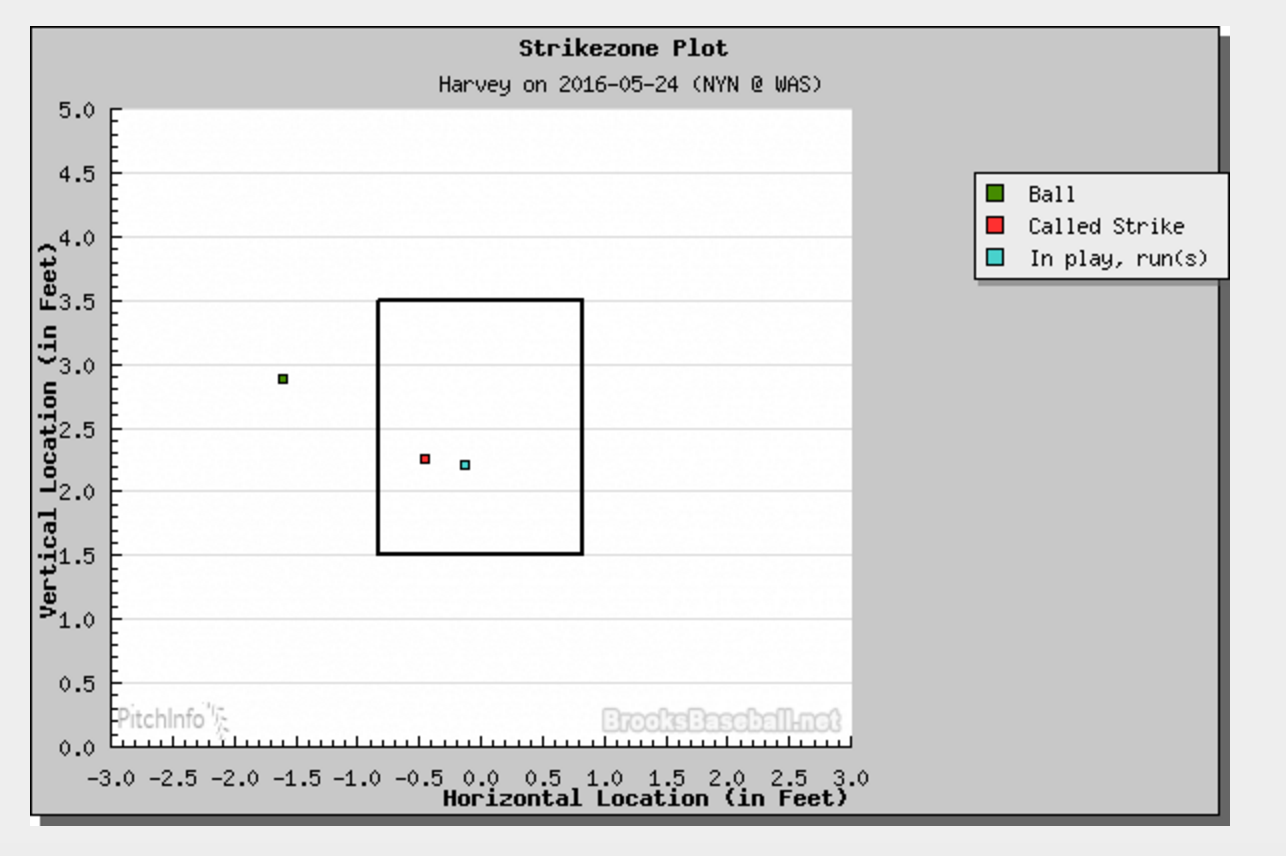 Harvey got out of the fifth without further damage, but he was done for the night after that, leaving with a line of five runs on eight hits and two walks.

Otherwise in Mets’ struggles—after eight years bouncing from one organization to another in the minors, Ty Kelly was finally called up for his first chance at the show. He was welcomed to the big leagues by striking out against Stephen Strasburg—and striking out against Strasburg again—and a third time, for good measure. But like Kelly himself says in this original song he recorded and shared on YouTube two years ago, “Row on/Let the river flow/You can only row.” (Really, it’s him.)

After dropping three straight, the Cubs put an end to any talk of the sky falling for baseball’s best. Dexter Fowler opened up the game with a leadoff double, and Chicago didn’t let up on Michael Wacha until they’d batted around—a six-run first inning, including a bases-loaded walk to Jorge Soler and a Jason Hammel double that drove in two. Wacha went on to give up two more runs in the fifth, and Dean Kiekhefer let the Cubs tack on another four in the ninth for good measure. The Cubs ended the 12-3 win with a hit by nearly every member of the lineup (with Jason Heyward the lone holdout).

With his second straight ten-strikeout game, Justin Verlander continued to look more like his old self than he has in ages. In his best outing of the year so far, he fanned 10 over eight scoreless innings, with three hits and two walks in the 3-1 Tigers win. Verlander has now gone at least seven innings in every one of his last four starts, with eight or more strikeouts and no more than three walks in each—the first time he’s put together such a stretch since 2013. This chapter of the possible Verlander renaissance came at the hands of the Phillies, who look as if their magical start to the season might be starting to wane, as they’ve now lost six of their last nine.

Jackie Bradley, Jr. wasted no time in extending his hit streak, doubling off the wall in the second inning. At 28 games, he’s now halfway to DiMaggio’s record—and just six away from the Red Sox’s franchise record, also held by DiMaggio (Dom, though). The Red Sox went on to beat the Rockies 8-3.

Though the Astros’ season so far has dealt almost exclusively in frustration and disappointment, their last four games had done so to an unusual degree—three painfully close one-run losses, followed by a drubbing. They took a break from the misery Tuesday, with a Carlos Correa walkoff single in the 13th inning to snap the losing streak with a 3-2 win over the Orioles.

Defensive Play of the Day
Yangerveis Solarte showed he’s plenty comfortable with the shift, with this impressive diving stop and quick throw to first far from his regular hot corner territory. The Padres went on to lose to the Giants, 8-2.

What to Watch on Wednesday
It’s a good day to play hooky (or simply to brighten your work day, if you’re not quite so brave) with seven games starting before 4 p.m. EST. Headlining those is Jake Arrieta looking to continue his streak of dominance, this time against Carlos Martinez and the Cardinals, who will be seeking retribution after Tuesday’s trouncing. Not to be outdone by its National League counterpart, the AL Central also has a division match-up led by an ace, with Corey Kluber taking on Jose Quintana as the White Sox now sit just a game and a half in front of the Indians.

If talented young arms are more your thing, the afternoon also features Steven Matz, going head to head with Tanner Roark as the Mets try to close the gap on the Nationals’ NL East top spot, and Aaron Nola, taking on Anibal Sanchez as the Phillies continue interleague play against the Tigers.

You need to be logged in to comment. Login or Subscribe
onegameref
Last season Sale struggled with the Twins. This year he seems to have overcome that problem and flipped it to the Indians. I think it was safe to say the Sox were outperforming for the first month and a half. Now they are seeking their true level and could be in 4th place in the division in short order if they don't find a way to turn it around quick.
Reply to onegameref