In my article here two weeks ago, I introduced the idea of a “swing zone,” complementary to the strike zone, for helping to identify batters’ plate discipline habits in the PITCHf/x era as the strike zone has changed. In doing so, I showed annual trends, the effect of batter handedness, and the effect of the count. I also showed that the swing zone increases by about 40 square inches over the course of the season, despite no corresponding change in strike zone size. I included it almost as an aside at the end of the piece, as a reason to discount the dramatic drop in zone size for 2016. It turns out, though, that I may have buried the lede a bit—that last bit, about the average swing zone increasing from about 725 square inches in April to about 760 in October (all playoff data included, November being lumped in with October) generated by far the most reader questions. Now, I don’t want to get pigeon-holed as just “the guy who writes about this swing zone thing he made up,” so next time out I’ll be branching out to something else, but for now I do think a follow-up is more than warranted.

To remind everyone, in the original research I found that hitters were indeed responding to the increasing size of the strike zone by being willing to swing at pitches in a broader area. The trend was visible when looking across all the data, but got overwhelmed by the effect of the number of strikes in the count. I further found that, much like the expansion of the strike zone, the effect was largely constrained to the area below 19” (i.e., the average bottom of the current rulebook strike zone).

The questions I got can be boiled down to two general families, the first being “Is this real?” and the second being “If it’s real, why is it real?” I’ll do my best to address them, and I think I’ll take them in that order.

So… is it real? The methodology used certainly leaves an avenue open for a way in which it’s not. Calling something a “swing zone” undoubtedly points the reader toward picturing a physical zone in which the batter is likely to swing, and this is indeed what I intended. It follows, then, that saying a swing zone got bigger implies that the zone itself expanded its dimensions. However, using the “summed fractions”-style method I chose leads to multiple potential causes of an observed zone size increase: the area in which pitches are swung at could be getting bigger (the intuitive meaning), or the fraction of pitches swung at within the same original area could be getting bigger (without the zone’s dimensions expanding). Of course, a combination of the two is also a possibility.

Going back to Jon Roegele’s original idea, this is where a threshold may be useful. By looking only at boxes that meet a certain swing percentage level, I might be able to differentiate dimension-increase from intensity-increase. Here are total counts of boxes that meet a specific threshold, separated by month. To allow the lines to appear on the same graph, each threshold’s trace has been normalized to that particular threshold’s maximum value. I’ll also note that for this and all analyses I’m writing about here, I’ve excluded playoff data and lumped October regular-season games in with September. 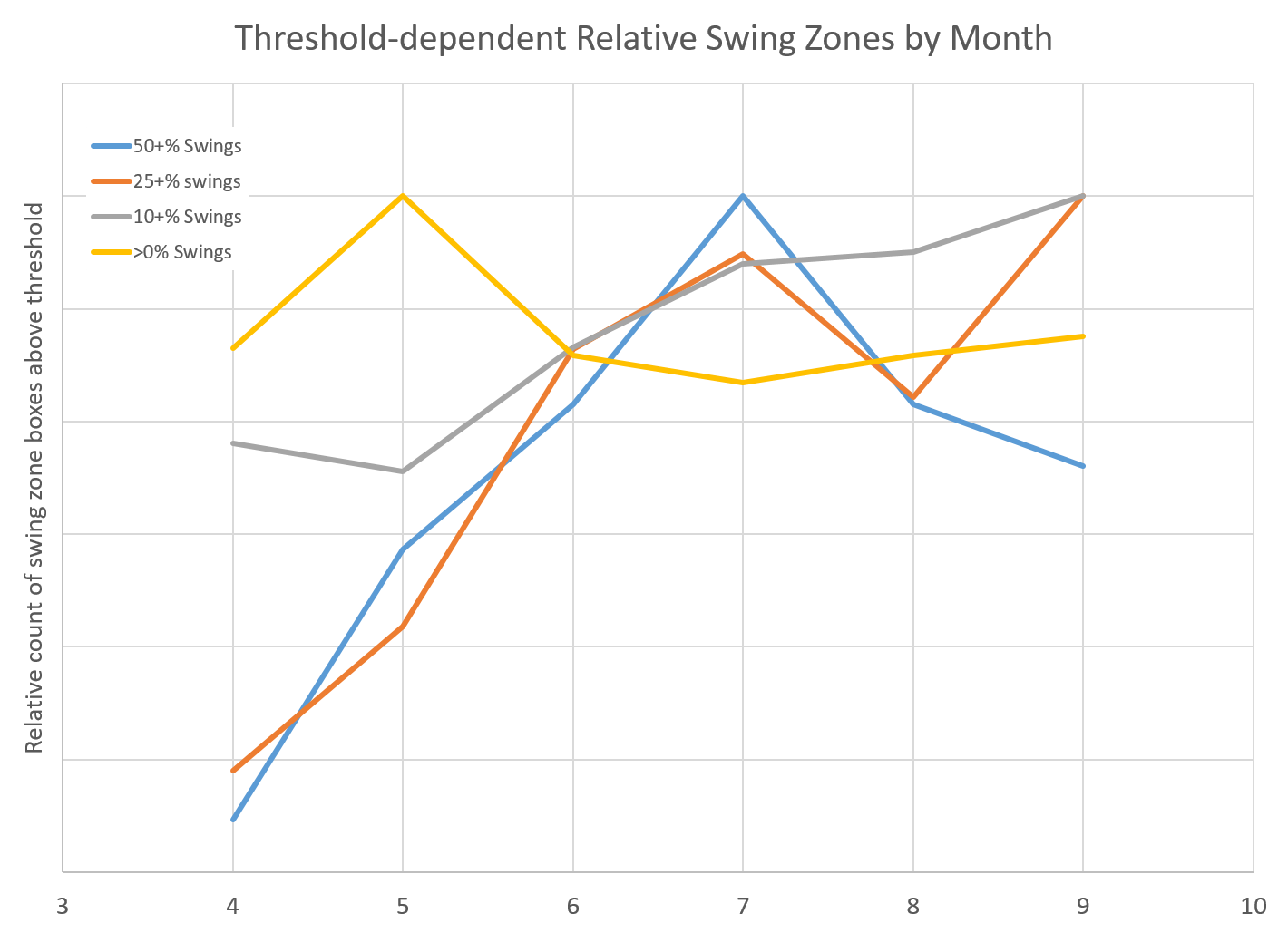 There seems to be some indication here that the “intensity increase” is the right answer, especially seeing the almost entirely flat line for the “>0%” threshold. Looking at the sums of boxes that qualify for each threshold adds more weight to this conclusion. 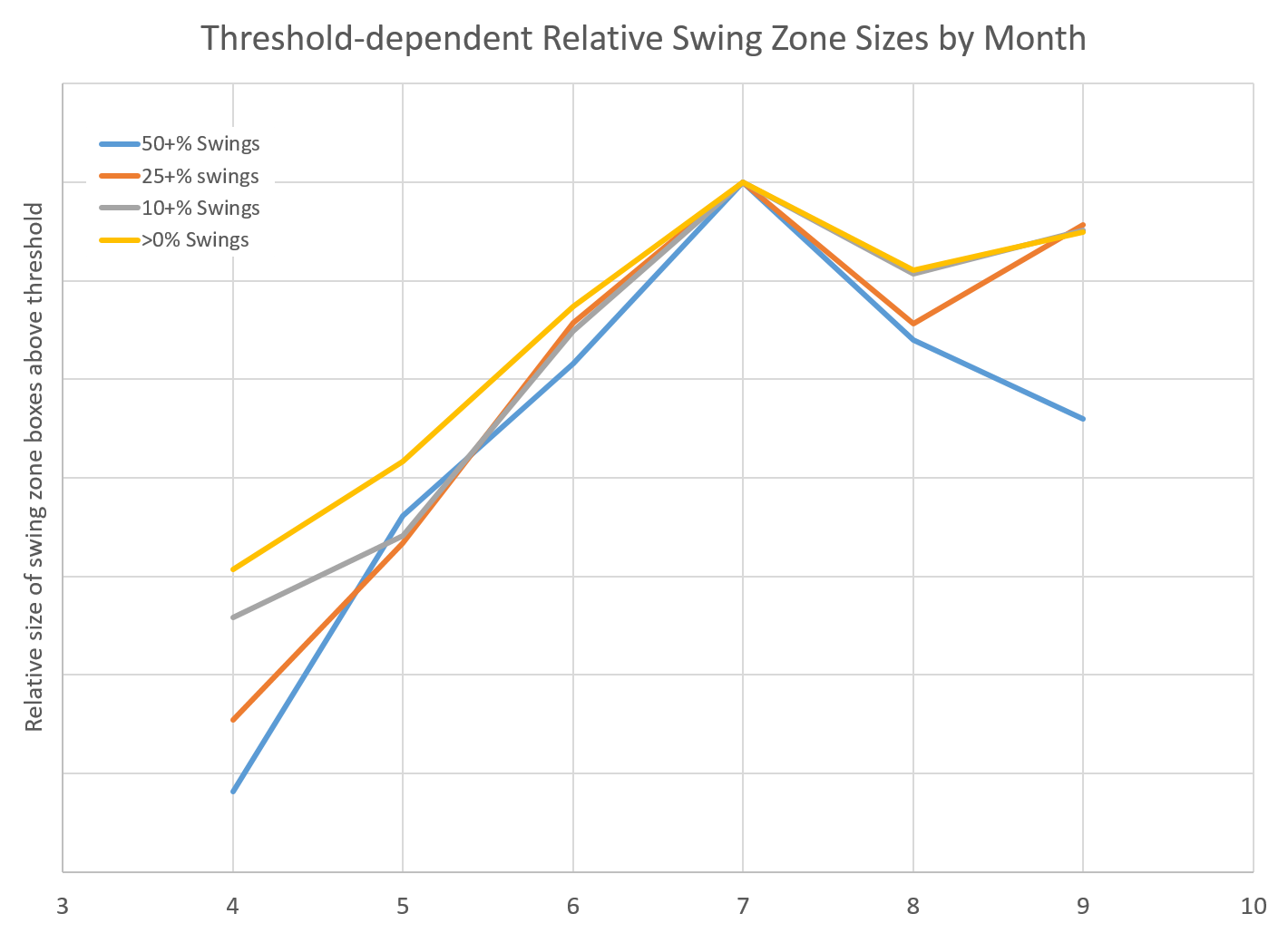 Here you see that the increase in size is highly consistent from one group to the next; since they’re sequentially inclusive (that is, every zone that qualifies for the “25+% Swing” group also qualifies for the “50+%”), this is indicative that most of the intensity change is in the highest-swing-frequency group. This is both more evident and potentially clearer through looking at the same data in non-cumulative fashion. 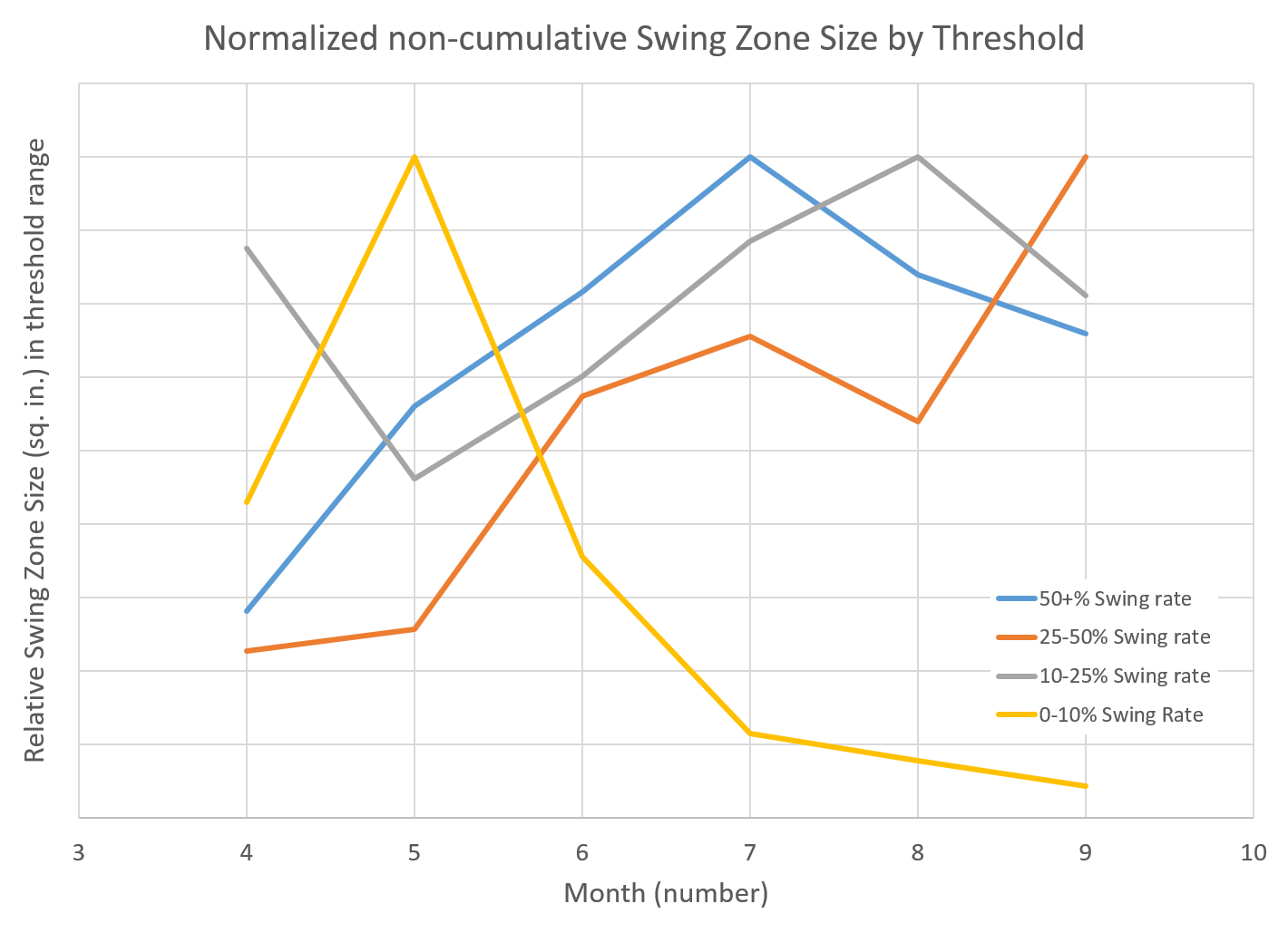 Now, that’s a little messy looking due to the normalization that was needed to put all the traces on the same scale, but if you look closely it’s much, much easier to see that the first two groups (50+% and 25-50%) are responsible for the entirety of the intensity gain, and split it roughly evenly between the two, while the 10-25% and 0-10% groups stay roughly level or drop, start-to-finish. The reasonable conclusion to draw, then, is that the intensity gain hypothesis is the correct one—it’s not that batters are expanding the zone for pitches they swing at over the course of the year, but that they’re more willing to swing at pitches within their current swing zone.

So with that out of the way, I’d like to try to explain some of this behavior (if I can). First stop, as was the case the last time around, is the platoon split. I was hopeful that either righties or lefties could entirely explain these data, but alas, the two sides show fairly similar April-September patterns. 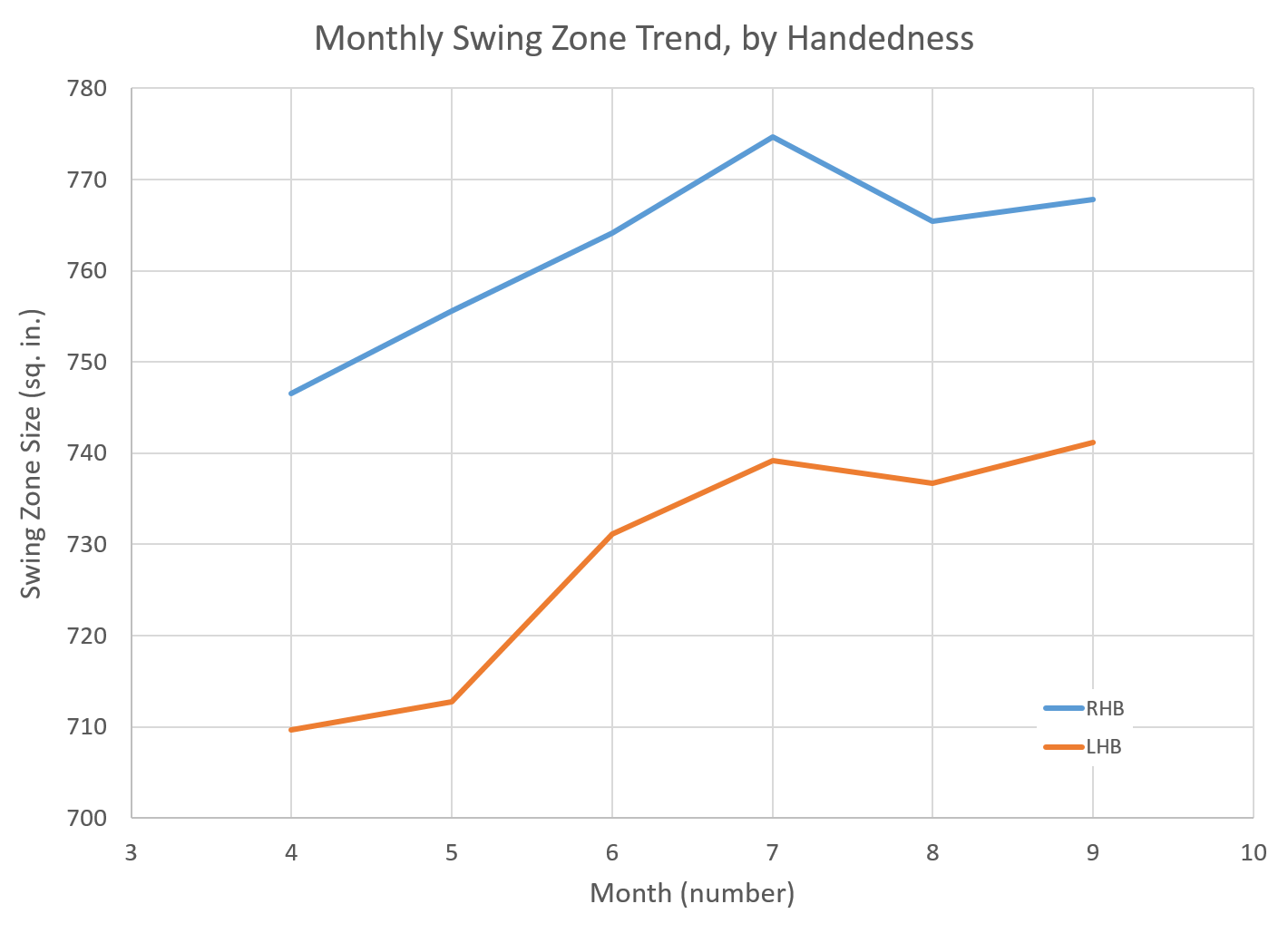 Instead of just looking at handedness, then, maybe the difference can be localized? By comparing each individual box in April and September, would a pattern emerge of a particular pitch location that gets swung at more as the year goes on? Here’s what those images look like, where red indicates a higher swing frequency in September than in April, and blue is the opposite. I split them by batter handedness, and it’s from the catcher’s perspective. 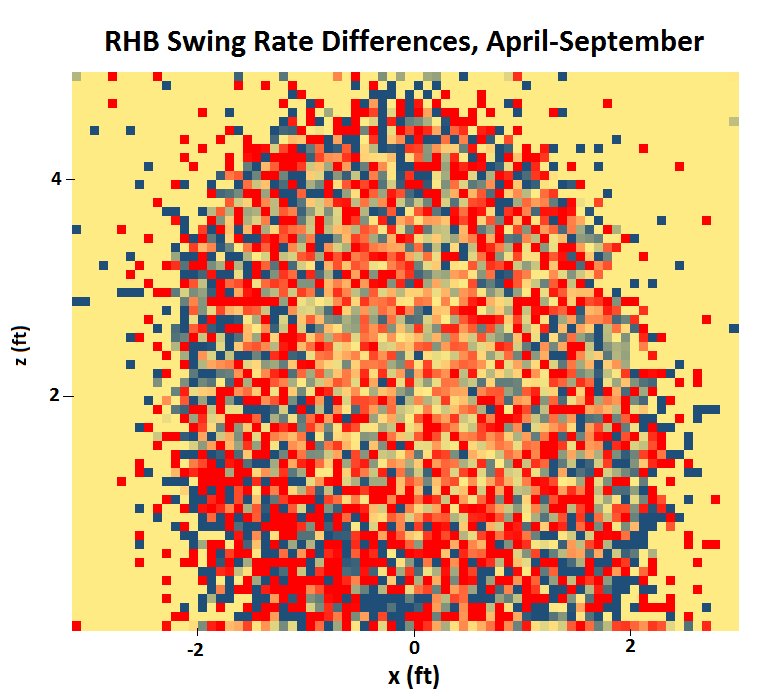 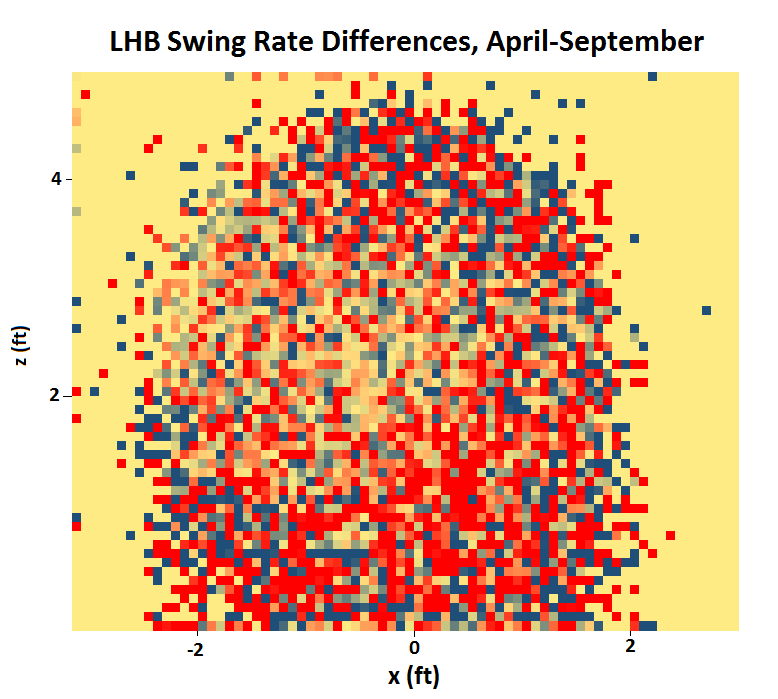 If there’s any pattern at all in those images, there might be a slight trend toward increased swings down and in for both sides of the plate, but that’s probably just a bit of apophenia (the tendency to perceive patterns in random data). However, that may be a case of using too fine a split to really be able to determine anything. Taking a step backward in complexity and grouping all individual boxes into one of nine zones in a 3×3 grid helps illustrate where the April-September differences are strongest. 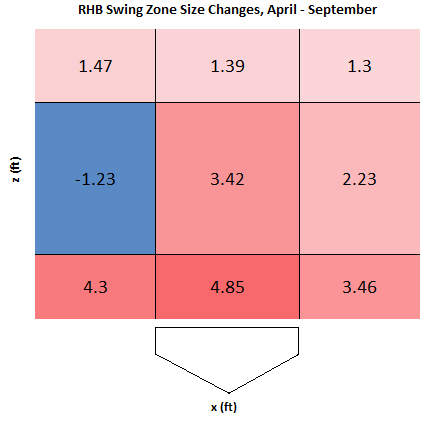 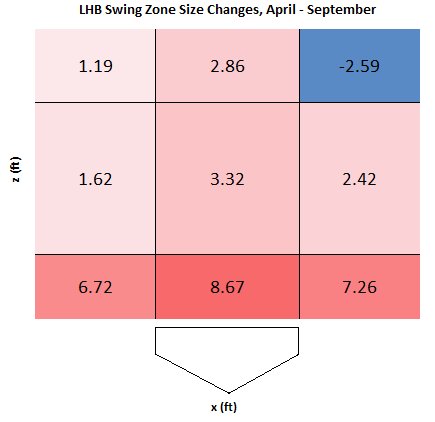 As you can see, for both righties and lefties the biggest jump in swing zone size comes at or below the (rulebook) strike zone and either over the plate or inside. For each batter handedness only a single grid space sees a drop in swing zone size from April to September, and it doesn’t correlate between RHBs and LHBs.

Unfortunately, even if I can identify *where* these extra swings are coming from, it really doesn’t do anything to explain *why* they’re happening at all. In fact, nothing I’ve been able to come up with can go toward answering that question at all. That seems like a question better suited to someone either with substantial playing experience or access to someone with substantial playing experience. What is it about the progression of the season that makes players (on average) swing more at lower pitches? I can’t answer that, but at least I’ve got the question figured out.

You need to be logged in to comment. Login or Subscribe
ddietz2004
Responding to why, I think Russell wrote a piece a couple of years ago which showed players swung more towards the end of a season due to the grind of a season and tiredness. I could be remembering that wrong, and not trying to illicit a comment from Russell. I could search for it, but someone will find it I'm sure.
Reply to ddietz2004
dhorst70
I also wonder if this an effect of cold vs warm weather. I would assume that a swing in April (winding blowing in at Wrigley) is rewarded less than a swing in warmer months.
Reply to dhorst70
JohnChoiniere
Man, I have no idea if players would be cognizant enough of things like that for it to make a difference. That'd be fascinating if it's correct!
Reply to JohnChoiniere
dhorst70
You are correct. A player would not be cognizant of the value of a swing, but other factors could steer behavior: mishitting a ball in cold weather hurts, either getting jammed or fouling a ball off yourself.
Reply to dhorst70
newsense
What about the fact that umpires are calling lower strikes? Could batters be catching up over the season with what the umps are doing?
Reply to newsense
JohnChoiniere
Maybe, but the trend can be seen in every PITCHF/x year, and I'd think that if it's a "catching-up" effect it would've diminished/disappeared by now. Could be wrong, of course.
Reply to JohnChoiniere