Wednesday night, while Max Scherzer was striking out 20 Tigers, the Reds and Pirates were striking each other. There were six hit batters in the game, four Pirates and two Reds. Reds’ reliever Ross Ohlendorf was ejected after the last of them, when he hit David Freese with a runner on second after the Pirates had taken a 5-4 lead.

This is not something new for these teams. Since the start of the 2012 season, there have been 94 players hit in 56 games between the Reds and Pirates. (Across the majors, there are, on average, .66 batters hit per game—.33 per side.) The six hit batters Wednesday represents an apex, but the teams combined for five hit batters on June 2, 2013, four on April 8 this year, and three on seven other occasions. In fairness, some of this is probably personnel-related. When you employ batters for whom getting hit by pitches is part of their on-base toolkit, like Shin-Soo Choo (hit seven times in Reds-Pirates games in 2013 alone) and Starling Marte (hit 14 times in Reds-Pirates games dating back to August 2012), it’s reasonable to expect things to get plunky. And Pirates games, in particular, feature a lot of HBPs in the box score. Since the start of the 2012 season, Pirates batters have been hit 328 times, the most in the majors and 15 percent more than the second-place Cardinals. Pirates pitchers have hit 293 batters, also the most in the majors, and 9 percent more than the second place White Sox. (The Reds are third at hitting batters and 14th at getting hit.) But six in one game is an awful lot, as is 94 since the start of the 2012.

This has led to discussion of what might be done about this sort of thing. A hard ball, thrown at high speeds, can cause damage to the human body. Per Brooks Baseball, the pitches that hit the six batters on Wednesday night were thrown at 91.7 (Alfredo Simon in the fourth), 94.8 (Juan Nicasio in the fourth), 80.9 (Simon in the sixth), 86.4 (Steve Delabar in the seventh), 92.5 (Jared Hughes in the seventh), and 95.0 (Ohlendorf in the ninth) miles per hour. Nobody appeared to get hurt in the game, but of course, batters aren’t always that lucky. So what can be done?

One proposal would be to give umpires more latitude to eject pitchers for retaliation. Baseball has a Book of Exodus hit-batter-for-a-hit-batter ethos. Batters may be hit intentionally for a number of reasons—htting home runs, a slow trot around the bases, using PEDs, being Bryce Harper or Alex Rodriguez—but retaliation for a prior hit by pitch offense, “protecting your teammate” in the parlance of players and announcers, is probably the most oft-cited reason.

As an aside, any suggestion that hit batters should be restrained leads to arguments that virtually always descend into grumbling that batters are coddled, pitchers can’t come inside, the game’s being wussified, etc. Let me say this: That’s nonsense. Here’s a graph of hit batters per plate appearance, from 1901 to the present. I reversed the scale, so when batters are getting hit the most—when there are the fewest plate appearances per hit batter—the line’s at the top of the graph. 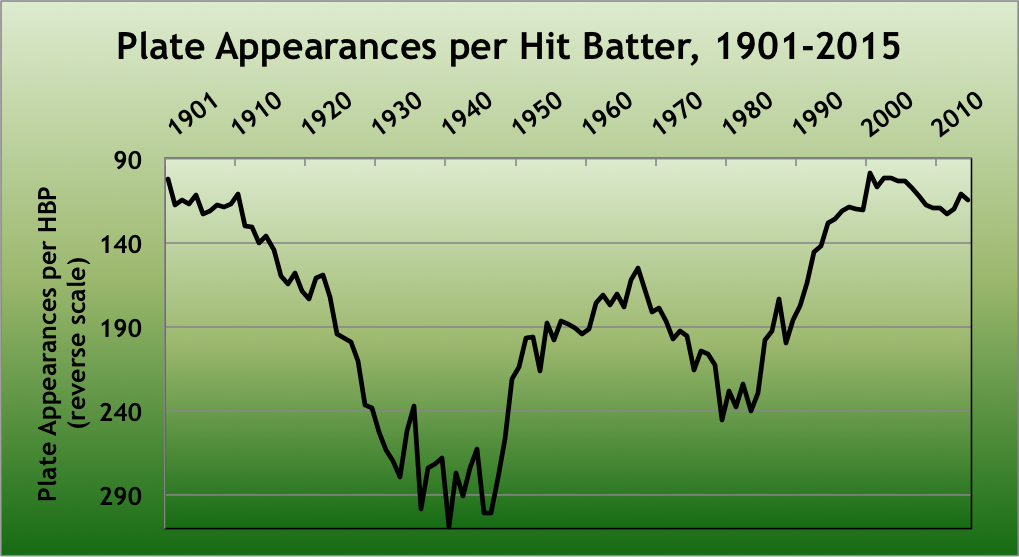 Of the 14 seasons with the highest rate of batters being hit, 10 have occurred since 2001. The rate so far in 2016, one hit batter per 114.9 plate appearances, would slide in next at 15th. Far from hit batters being legislated out of baseball, we are living in the golden age of batters being hit by pitches. (The reason, I contend, is rising strikeout rates, but that’s another discussion.)

Specific to the Reds and Pirates, how much is retaliation a factor in the teams’ rising body count? Wednesday’s game would seem to suggest it’s the casus belli. In the first inning of the teams’ prior game on Monday (Tuesday’s game was rained out), Pittsburgh’s Jonathan Niese hit the Reds’ Joey Votto. In the top of the fourth on Wednesday, Simon hit the Pirates’ Jung-ho Kang. In the bottom of the inning, the Nicasio hit the Reds’ Brandon Phillips. In the top of the sixth, Simon hit Marte. In the top of the seventh, Delabar hit the Pirates’ Sean Rodriguez. In the bottom of the seventh, Jared Hughes hit the Reds’ Adam Duvall. In the top of the ninth, Ohlendorf hit Freese. Of the six hit batters, all but one—Rodriguez got hit after Marte had—could be construed as retaliation for the pitcher’s teammate being hit previously.

I catalogued all 94 hit batters in Reds-Pirates games from the start of 2012. In each instance, I considered the hit batter to be retaliation if it followed a member of the other team getting hit. This is a very liberal definition of retaliation. Hughes hit Brandon Phillips in a game on September 10, 2012. The teams played five more games that year without incident and went through the offseason before Mike Leake hit Marte in the bottom of the second on April 12, 2013. But, since a Pirate was hit following a Red being hit, I counted it as retaliation. Also, as there have been hit batters in 56 games between the two clubs since the start of 2012, there have been 27 games in which nobody got hit. I counted retaliation even if several games passed between the teams with nobody getting hit.

Reds-Pirates hit by pitch trivia: The player hit the most often is Marte, 14, followed by Andrew McCutchen (eight), Choo (seven), and Brandon Phillips (six). The pitcher who hit the most batters is Simon (12 despite pitching for Detroit in 2015), followed by Mike Leake (six) and Hughes, Francisco Liriano, and Charlie Morton (five each). Simon has hit Marte five times,but no other pitcher/batter combination has occurred more than twice. Aroldis Chapman hit three Pirates, which has got to have hurt.

Of 93 opportunities for retaliation (not counting the first time a batter was hit during the span), I counted 46 instances in which it occurred. In other words, retaliation accounts for just under half of all Reds-Pirates hit batters. And if I exclude this season (15 hit batters in eight games—that’s a lot!), I chalk up 36 of 78 hit batters to retaliation.

You've probably figured out that, by this way of determining retaliation, half of HBPs would be called "retaliatory" by random chance alone. And so they are. If bad feelings are driving the extreme aggression in Pittsburgh/Cincinnati games, it's not showing up in the record—though, in fairness, we still can't rule it out, especially in the later stages of this rivalry. HBPs levels are especially high between the teams this year, and 10 of the 14 would meet our broad and liberal definition of "retaliatory."

So what can we conclude? Well, there have been a lot of hit batters in games between Cincinnati and Pittsburgh, at least one in over two-thirds of the games between them since 2012. Reds-Pirates games have accounted for 0.8 percent of National League games played but 2.8 percent of hit batters since the start of the 2012. Is that too much? Yeah, probably. Should something be done about it before somebody gets hurt? Your mileage may vary, and it doesn’t sound unreasonable, but outlawing retaliation won’t do the trick. Because even with a broad definition of retaliation, that doesn’t seem to be what’s driving most of the hit batters here. Rather, we need to probably blame it on Baseball In The Modern Era.

You need to be logged in to comment. Login or Subscribe
GBSimons
FYI, the graph referenced in paragraph five isn't there, just the word "PIC."
Reply to GBSimons
mainsr
Thanks. Will post another comment here when it's fixed.
Reply to mainsr
lyricalkiller
Area Editor Makes A Dumb Mistake: Fixes It Upon Request.

This is corrected.
Reply to lyricalkiller
maphal
I blame the Cardinals.
Reply to maphal
newsense
Crazy suggestion to stop "retaliatory" HBPs:

Every time a player is hit by either side, the HBP penalty goes up by one base. perhaps you could exempt minor HBPs (on the uniform or glancing of the hand or arm)where the ball does not bounce and the catcher can field the ball hitting the dirt.
Reply to newsense
kvamlnk
Doesn't that create an incentive to get the first HBP.
Reply to kvamlnk
kvamlnk
Meaning the SP plunks the first hitter in the first inning so his team will now get two bases if plunked.
Reply to kvamlnk
mainsr
I assume side doesn't matter? So if I hit your leadoff batter, then hit another of your guys later in the game, that batter gets two bases. Doesn't have to be your pitcher hitting one of my guys.
Reply to mainsr
newsense
Yes, that's right.
Reply to newsense
newsense
The "incentive" only works if you're sure the other team is going to hit one of your batters before your pitcher hits another of theirs.If my pitcher hits a batter, if one of my batters is hit next, he gets two bases but if my pitcher hits a second batter before the other team's pitcher does, then it costs him two bases
Reply to newsense
mainsr
I recall a proposal to make HBPs like ground rule doubles: batter gets two bases and all runners advance two bases. The problem is--Pirates example again--you don't want to create an incentive for batters to lean in, e.g. Jose Tabata breaking up Max Scherzer's perfect game last year.
Reply to mainsr
Earbender
I can't see how this article was written without one mention of the great Dock Ellis!