The Thursday Takeaway
Bartolo Colon took the mound Thursday for the first time since the beauty of his historic first home run last week. But any lingering bliss was quick to evaporate, as the Dodgers piled on for a four-run first inning anchored by a Yasmani Grandal home run. It was quickly made clear that Thursday’s spotlight would belong to the game’s other starting pitcher: one Clayton Kershaw.

It took Kershaw just 109 pitches to make it through a complete game shutout, with 13 strikeouts on three hits and one walk. It’s a line that would be impressive by almost any standards—one of the season’s five best outings, according to Game Score—but here, it’s largely impressive only in just how normal it felt for Kershaw. What would have been the best game of the season for all but a handful of pitchers was Kershaw’s best only since last week, when he tossed another complete game shutout, one that featured 14 strikeouts and no walks. Strong as it was, Thursday’s outing actually hurt his strikeout-walk ratio for the season, nudging it down from a league-leading 21.33 to a still-league-leading-by-a-ridiculous-margin 19.25. (And the pitcher in second place for K-BB ratio, with a figure less than half of Kershaw’s? Colon, who entered Thursday at 8.25.)

It marked Kershaw’s fifth consecutive game with 10 strikeouts or more, the longest such streak not just in his career but in Dodgers franchise history. He’s several outings away from the record for a run of double-digit strikeout games (eight, courtesy of both 2015 Chris Sale and prime Pedro Martinez from 1999), but it’s also worth noting that he stands alone in the fact that he’s gone at least seven innings in every game in this streak and has never allowed more than one walk.

Quick Hits
The 2016 edition of Dallas Keuchel has been quite different from the 2015 one, and not in a good way—lower velocity, poorer control, fewer strikeouts. This was all on display Thursday, as the Red Sox walked all over Keuchel to the tune of eight runs off 10 hits and three walks in six innings. He began by giving up a home run to Xander Bogaerts in the first inning, and it only got worse from there, with another home run courtesy of Mookie Betts and two wild pitches also to come. In short, Keuchel was all over the place, and the Red Sox took advantage of it for their fifth straight win. 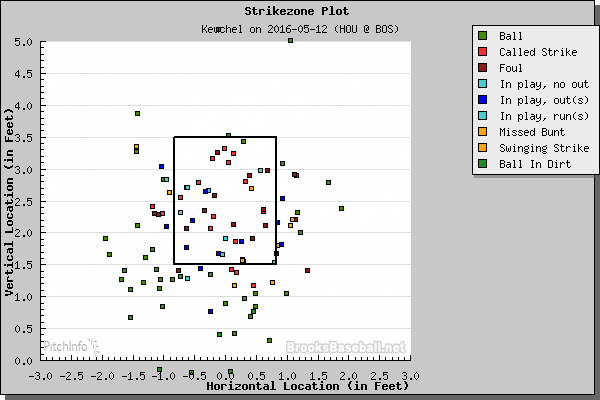 David Price, for his part, was in fine form to match the work done by Boston’s offense. He held the Astros to one run in 6 2/3 innings of work, striking out 12 while walking just one.

To say that Chase Headley’s start to the season has been rough is to put it mildly. Heading into Thursday’s game against the Royals, he had the dismally symmetrical slash line of .178/.265/.178, nary an extra-base hit to be found. But all bad things must come to an end, and Headley ended his dry spell with not just any extra-base hit, but a two-run dinger that put the Yankees on the board. They went on to win 7-3, taking three of four games in the series against Kansas City.

Through six innings Thursday, Vince Velasquez looked sharp. The young pitcher had kept Atlanta scoreless on two hits and one walk, with five strikeouts, while the Phillies’ offense did their part to provide run support—notably Odubel Herrera, who at that point had gotten on base in each of his four plate appearances, scoring once and driving in an additional run. But when Velasquez took the mound for the seventh with a 4-0 lead, things went downhill quickly. The Braves’ anemic offense came to life as Velasquez began missing his spots, and the result wasn’t pretty for Philadelphia: a single, a walk, another single, and finally, a painful last straw in a three-run double from Gordon Beckham, not exactly known for his offensive capability (if anything, rather well known for his distinct lack thereof). Having not recorded a single out in the inning, Velasquez was pulled, his night tarnished. But his work was not wasted, as the Phillies redeemed him in the tenth with Cameron Rupp using a three-run double to play the role of unlikely hero and Jeanmar Gomez closing it out.

Defensive Play of the Day
Starlin Castro showed off a little pirouetting action on the run to beat out Alcides Escobar.

What to Watch on Friday
Lance McCullers will make his season debut after starting the season on the disabled list with shoulder soreness. With two rehab starts under his belt, he’ll look to use his return to jumpstart the struggling Astros (saved from last place only by the unmitigated disaster of the Angels, and even then only barely). McCullers impressed with his rookie campaign last year, putting up a DRA of 3.11 with more than one strikeout-per-nine. He takes the mound against Steven Wright and the Red Sox at 7:10 EST.

From the back of Cleveland’s rotation, Josh Tomlin has quietly been building towards a breakout season of sorts. To be fair, the bar for breaking out is pretty low for someone who has shuffled between the bullpen and rotation after struggling to return from Tommy John and then shoulder surgery, but it’s something nonetheless. Always known for a low walk rate (a career mark of 1.5 BB/9 heading into this year), Tomlin has taken that a step further in 2016, allowing just two walks in his five starts. The issues that have traditionally plagued him—too many fly balls, too many of which go for home runs—haven’t disappeared, but they’ve been less damning this year and the results have been decent, while certainly still not spectacular (the bar for breaking out is low here, remember). Tomlin has won each of his first five starts, and he takes on Ricky Nolasco and the Twins at 7:10 EST.