The Wednesday Takeaway
The Washington Nationals have been the focus of a lot of news this week, and two of their most visible figures were the ones making the news. Stephen Strasburg decided to skip out on free agency and sign a seven-year contract extension worth $175 million. Bryce Harper got ejected from a game and, after the Nats picked up the victory in walk-off fashion, Harper let the ump who ejected him know exactly how he felt about the entire ordeal. Bryce Harper may forgive, but he does not forget.

On Wednesday night, however, the spotlight was firmly on Max Scherzer and the masterful performance that he delivered against his former team. Scherzer faced the Tigers for the first time since leaving Detroit for Washington via free agency, and the 31-year-old righty pitched like he had something to prove against his old team. By the time Scherzer left the mound, not only had he gotten the best of his former club, but he’d also ended up making some major history in the process.

Scherzer pitched a complete game, as he gave up six hits and two runs over 119 pitches in Washington’s 3-2 victory over Detroit. However, he also did something that only three other pitchers have done in history: He collected a whopping 20 strikeouts in a single game.

Of the 119 pitches Scherzer threw on the evening, 96 of them were strikes and only 23 of them were balls. Those were nine fewer balls than what Randy Johnson threw during his 20-strikeout game, and just under half of how many Roger Clemens threw during his second 20-strikeout game. He’s only the 30th starter to throw at least 81 percent of his pitches for strikes (minimum 50 pitches) in a game, and only the third to do so while crossing the century mark for total pitches. Plus, look at all of the swinging strikes. Scherzer had the Tigers in a world of befuddlement. 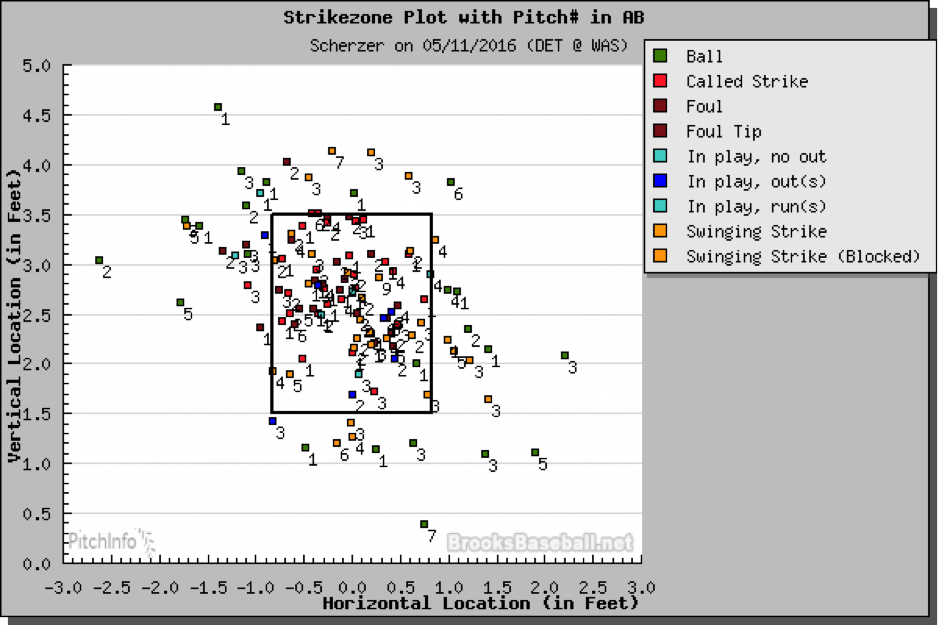 Scherzer’s four-seamer and slider were his two main instruments of destruction on the evening, but they were also the two pitches that could be considered his only major mistakes. Jose Iglesias managed to turn a 93-mph four-seamer on the inside corner into a dinger, and J.D. Martinez sent an 85-mph slider over the center field fence in the ninth, briefly causing drama over whether Dusty Baker would thwart history and bring his closer into the one-run game. Other than that, the four-seam fastball and the slider were the source of a lot of rough at-bats for the Tigers. 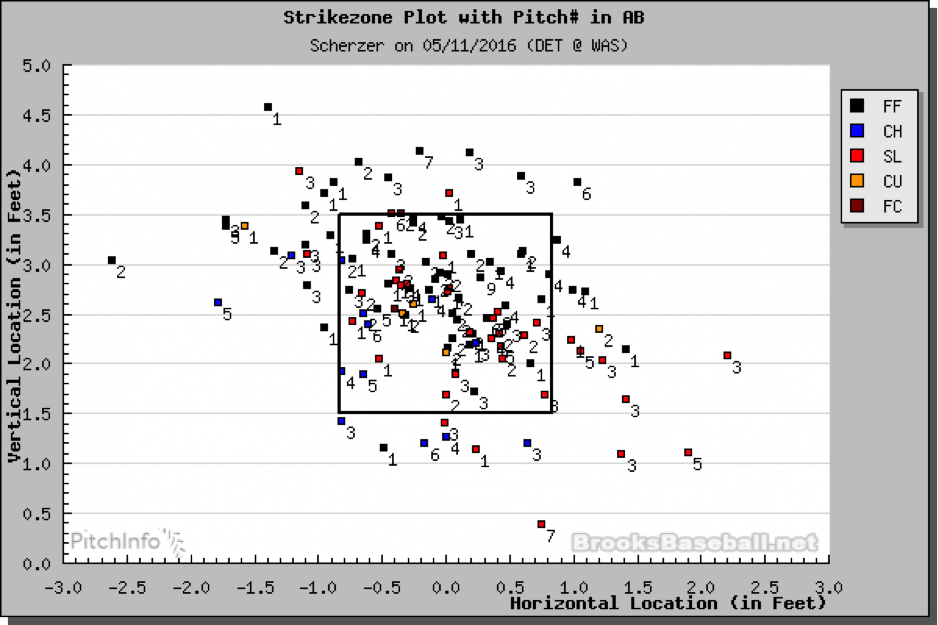 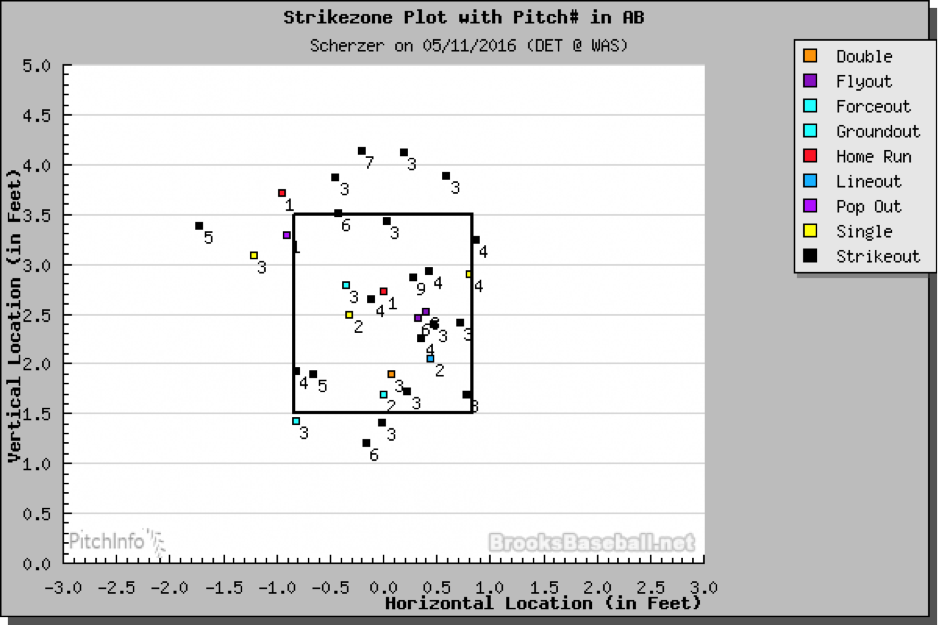 Not only did Scherzer’s dominant performance put him in the elite company of Randy Johnson, Clemens, and Wood, it also put him in an even more exclusive club with Johnson. Scherzer and Johnson are now the only two pitchers in history with a 20-strikeout game and a perfect game on their resume.

Scherzer may not have been the most talked-about National going into Wednesday night’s game, but he’ll definitely be the focal point of conversation until his next start.

Quick Hits
Frustration was the theme of the day at Minute Maid Park. It’s hard not to get frustrated if you’re the Astros and you leave eight runners stranded in the first three innings of the game—including two different situations with the bases loaded. It’s even more frustrating when you go eight innings without picking up a single hit, which is what the Astros managed to achieve from the seventh inning until the 16th inning.

At one point during the hitless streak, the Astros managed to get the winning run to third base, but it took sacrificing two at-bats in order to get Colby Rasmus 90 feet away from victory. With the margin of error as slim as it could be, Erik Kratz came up to the plate with a chance to end Houston’s frustration on the day. The 35-year old righty with a career .226 TAv couldn’t get it done.

But the man who finally was able to get it done for Houston was Marwin Gonzalez. After over five hours and 488 pitches, Gonzalez sent the game’s 489th pitch into the mostly empty right field seats and gave Houston the walk-off W. The frustration was over for Houston, and the sweet relief of a Gatorade bath had set in.

Meanwhile in the Pacific Northwest’s outpost of the AL West, the Mariners also had to deal with some frustration of their own. Seattle raced out to a 4-0 lead, but that lead disappeared immediately in the fifth inning thanks to Corey Dickerson picking a lovely time to hit his first career grand slam.

Seattle moved back ahead in the sixth inning, but Tampa Bay refused to go away, and Kevin Kiermaier made sure to add to Seattle’s frustrations by hitting a homer that ended up sending the game to extra innings.

In the end, the Mariners were able to join their AL West rivals from Houston in the May 11th Extra Innings Winners’ Club thanks to a walk-off shot from Chris Iannetta. The Mariners have won eight of their last 10 and are currently sitting pretty atop the AL West, according to both the standings and the playoff odds.

But the May 11th Extra Innings Winners’ Club actually had three members, with the Giants adding their name to the charter after a 13th-inning walk-off victory over the Blue Jays. However, it could be argued that the Blue Jays deserve a pretty hefty referral fee, and Ryan Tepera will be the one receiving the bulk of the fee. 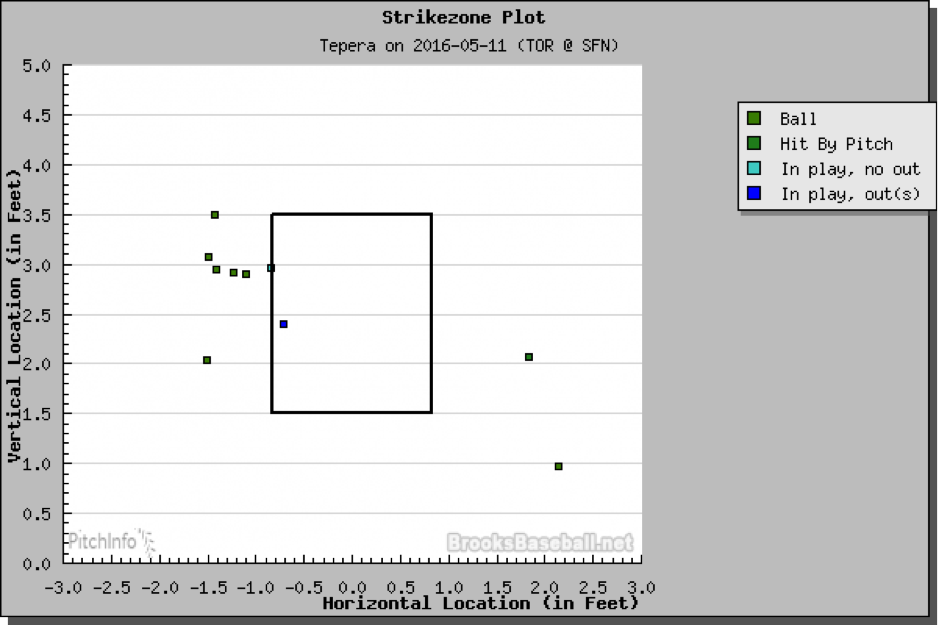 Tepera’s wild outing ended with a four-pitch walk of Buster Posey, and both teams ended the day at .500.

Defensive Play of the Day
Anytime a shortstop manages to throw out a runner at first from shallow left field, it’s spectacular. It happened twice yesterday—both Carlos Correa and Xander Bogaerts managed to pull off the defensive feat.

What to Watch on Thursday
Clayton Kershaw will be taking the mound on Thursday evening, and his starts (combined with Vin Scully’s timeless commentary) have been appointment viewing for quite some time now. However, Kershaw will be facing his biggest challenge in recent memory: What will the three-time NL Cy Young award winner do when he takes on legendary power hitter Bartolo Colon?

Sure, Kershaw is heading into this game with a 1.83 DRA and a cFIP of 49, but Colon has proven that his power stroke at the plate is a force to be reckoned with. One thing is for certain: Kershaw had better not serve up a four-seamer down the middle, or Colon will send it into the seats. Can Kershaw rise up to the test and get the best of the New York Mets’ big bopper?

You need to be logged in to comment. Login or Subscribe
newsense
The Iglesias home run pitch was not on the outside corner - it was up and in and outside the strike zone that h turned on. I don't think Iglesias is capable of pulling an outside pitch into the left field stands just inside the foul pole.
Reply to newsense
oldbopper
The first live game of the year, Yard Goats vs. New Hampshire, on a perfect evening, then home to watch Colon vs. Kershaw. It doesn't get better than that!
Reply to oldbopper
ramtax
Scherzer hasn't pitched a perfect game, thanks to Jose Tabata's elbow. Two no-hitters, but no perfecto.
Reply to ramtax
TGT969
How about the beanball in Cincy vs Pirates. 4 Bucs hit vs 2 Reds. Thats 39 batters hit since 2013. Mostly Pirates. Dusty Baker started it & now he's having fun with the Nats...
Reply to TGT969
seanqueue
I was kinda hoping to see highlights of Noah Syndergaard's double Bartolo from last night too. Heck of a day to be a baseball fan.
Reply to seanqueue
Zennith
Yeah, bizarre that Noah was left out on a night like that.
Reply to Zennith