As far as team-friendly extensions go, this may be as shocking as it gets. Instead of testing the open market in a decidedly dicey post-2016 pitching market, a Scott Boras-represented ace took perhaps a little under market value to stay with the team that drafted him. Now, the Nationals have probably locked in the most expensive starting pitcher–and maybe the most talented–from both the 2015 and the 2017 free agent classes. By inking Strasburg to a seven-year, $175 million deal now, the Nationals have jumped the gun on free agency, and locked in the offseason’s best starting pitcher before he could hit the open market.

The deal makes sense for the Nationals because nearly any deal with Stephen Strasburg makes sense for any ballclub. He’s very good, if not the dominant once-in-a-generation ace that many pegged him as coming out of San Diego State. If Strasburg is Pac-Man, strikeouts are those little pixelated dots–he gobbles them up at rates that seem almost silly. Since 2011, Stras has the second-highest strikeout rate (28.3 percent) among starting pitchers.

To start, perhaps it’s worth it to establish his talent level and performance history. Peripherals aren’t really the problem with Stras–he has the second-highest strikeout rate among starting pitchers with 600 or more innings since 2011, with 28.3 percent punchouts. His control is solid as well … he’s got a career walks-per-nine of 2.2, and it has stayed under 2.0 since 2014. Home runs seem to be a weakness, in that he still gives them up, but he’s regularly given his team between 3.0 and 5.0 WARP over his full seasons. His cFIP–a solid measure of his “true talent level”–historically sells his talent level as close to league-average, and that bears watching, but he’s at least the No. 2 starter on every team in baseball, if not the ace.

In fact, you might even make the argument that he’s the poster child for the 2010s. Think about it: phenom, incredible stuff, strikeouts like whoa, an injury history that includes Tommy John, and there’s even an ERA-FIP gap here; Strasburg’s fielding-independent numbers have undershot his runs allowed in all but one of his seasons. If it weren’t for the pesky Tommy John surgery and the huge velocity and bendy breaking stuff that makes people squirm about his eventually needing another zipper, he’d pretty much profile as exactly the kind of pitcher who should get a David Price- or Max Scherzer-type free agent deal to pick his spot and really cash in.

So why would the only guy set to hit the free agent market with the pedigree of an ace in 2017 (other than Rich Hill, of course) decide to make the safe choice and stick with the devil he knows in Washington? It’s safe to guess that the biggest reason is because he is a walking, talking injury risk. And even among starting pitchers–whom we expect to break down more frequently than an old Geo Metro–Stras’s track record of injuries both big and small throws red flags. Just last season he was limited to just 127.3 innings, and he’s about four years removed from his first Tommy John surgery. Getting paid now reduces his risk of a catastrophic injury before the end of the season that moves his big 2017 contract from nine figures to eight.

There’s also the issue of fit. The Washington Nationals are a good team, and they’ve been pretty darn good throughout most of Strasburg’s MLB career. They employ the best hitter in baseball in Bryce Harper, have good young talent in guys like Lucas Giolito and Trea Turner, and have an owner who is willing to dole out big money to free agents. Also, they play in the National League East, where the only real competition is a Mets team with questionable ownership. Why get up and go? If Strasburg is committed to winning a World Series, he could head to Chicago in the offseason, or maybe sign on with the Dodgers or Yankees, but would the odds get that much better for him? (In Chicago, yeah. Everywhere else, probably nah.)

And though I mentioned that he likely left money on the table by staying in Washington, he did get a “rolling opt out” that appears to kick in after years three and four in the contract, which will allow him to cash in big time if his elbow can hold out for that long. A quick look at Brooks Baseball shows that despite a league-wide dip in velocity among high-performing starters this year, Strasburg is maintaining roughly the same velocity as he always had over his post-TJS career. 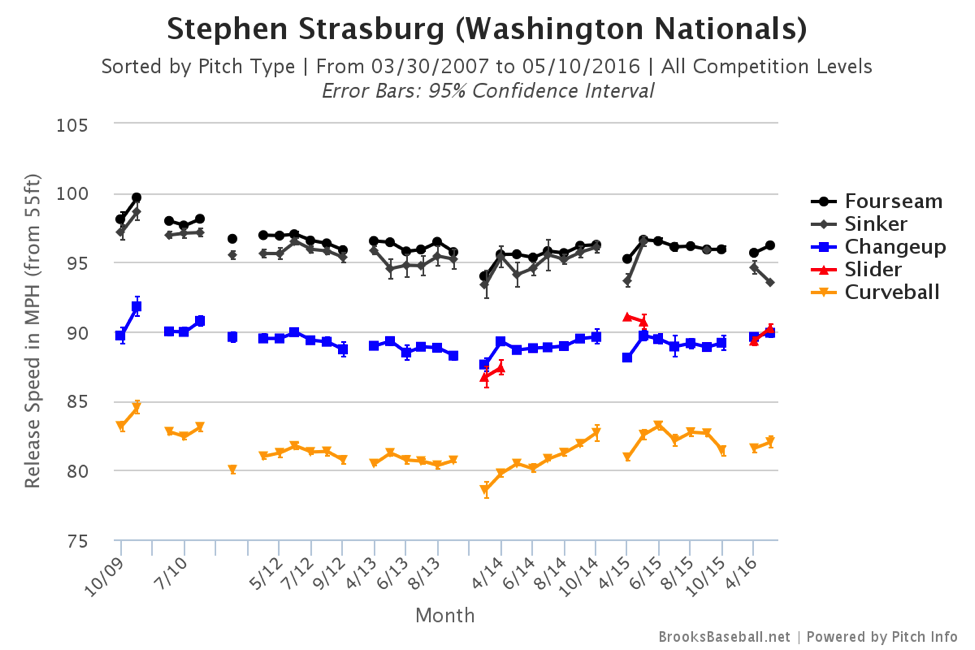 So is this move to retain a good–but perhaps disappointing compared to his hype–starting pitcher with a serious injury risk an excellent deal for the Nationals? I’m inclined to say yes, and we can start with the projections. If Strasburg makes it through the next seven seasons of his extension healthy and whole, PECOTA pegs him to be worth about 21 WARP through his age-34 season. In every following year that he’s healthy, you can expect a baseline of about three wins. Now, I don’t buy seven years of perfect health, so I’d recommend snipping about a year and a half from those seven. That gives the Nats approximately 16 wins above replacement over the life of the contract, a figure that could easily track higher if Stras simply maintains his current abilities or–as he’s flashed in his first six starts of the season–shows signs of mild improvement. A team would be thrilled to get that kind of production at a $25 million per year value out of a starter, even if you pro-rate all those wins over periods of injury. Sure, if Strasburg gets injured soon, he could recover just in time to opt out and leave the Nats holding the bag, but as far as risks go, it seems to be an acceptable one. And other than the mercurial Rich Hill, there’s no one out there in the free agent market that would have been an acceptable replacement for Strasburg if the Nats were to have let him walk–possibly to an NL rival–this offseason.

So this is a good deal for both parties, I think … but I’d quickly like to take a detour into speculative hot-take territory. Is it possible that this Strasburg extension–a deal that appears to be decidedly different than most of Scott Boras’s clients have taken in the past–could be a move by the Nationals to set a precedent for the other superstar on their roster? Bryce Harper’s impending free agency will be a topic of conversation from now until 2035, but given the similarities between him and Strasburg, it’s not hard to see a straight line from this deal to another potential extension. First, it establishes that the Nationals are able and willing to spend big to retain top talent, not just go shopping in free agency. Second, if you see this deal as favorable to Strasburg, it’s hard not to imagine Boras taking from the experience that a rich extension might be a good move for his client, instead of bouncing out to the free agent market at first chance.

Even if this deal was a bit of an overpay or too risky for the Nationals–and personally, I don’t believe that it is, arm risks or no–might it be worth the extra cash or the opt out risk if it moves Harper’s chances of re-signing with the team by five to eight percent? How much is it worth to cast another tie between Boras and the Nats in preparation for the most important contract negotiation in the franchise’s history? Of course it’s possible that Strasburg’s teammate is enough of an iconoclast to spin his own future, free from consideration that he should follow the tall righty’s trail … but a year ago, I’d have told you that there was no way the tandem of Boras and Strasburg would have made this move. It’s too safe. There’s a strong possibility that there were dollars left on the table by making this deal, rolling opt outs and injury risks aside. And Scott Boras isn’t usually in the business of leaving dollars on the table.

Perhaps this simply comes down to Stephen Strasburg putting himself in the best possible position for the next seven years. Not only does he now have financial “stability”–though such a term quickly loses meaning when yearly salaries are in the hefty eight figures–but he’s playing on a contending team in a big market next to the best* player in baseball. Perhaps taking a moderately-higher paycheck to pitch in Los Angeles or the Bronx isn’t as appealing as the idea of staying with the Nationals.

* – But is he? We could probably use another episode of Effectively Wild to help us figure it out.

The move isn’t as exciting as watching Strasburg take a $300 million contract to go to the Dodgers or return to San Diego or don pinstripes. It’s safe, and almost painfully boring–a player chooses security at home over the last few million dollars he can earn. But Nationals fans should be pretty pumped about this deal, as they’ve retained a foundational starter and one of the top pitchers in the game without having to go through the ups and downs of free agency. For such a high-risk, high-reward player, this move feels almost anticlimactic, but I’m sure we’ll all get excited again during Strasburg’s next 12-strikeout start.

You need to be logged in to comment. Login or Subscribe
jrbdmb
Strasburg is not making Kershaw-type money, but he is still comfortably in the Top 10 all-time richest contracts for pitchers.

That said, this makes you wonder if Boras or Strasburg know more about his arm health that the Nats do - or at least looked at the odds and determined that cashing in now made more sense.
Reply to jrbdmb
madjockmcferson
i wonder how much a diagnosis of injury is down to the player saying "it's sore" or not. I'm pretty sure they lie when they want to continue playing and sometimes they get more injured because of it. I wonder if the diagnosis of injury can be made independent of pitchers 'feelings' and how much can be diagnosed via MRIs etc...
Reply to madjockmcferson
JCCfromDC
When you add the fact that $70M are deferred with no interest, the deal looks even better for the Nationals. The present value equivalent lowers to about $22.5M AAV. In a market where Mike Leake gets $14M AAV and Ian Kennedy (with a QO) gets $16M AAV, when Strasburg would have been a much better talent in a tighter market, that's a pretty good rate to get w/o even having to compete
Reply to JCCfromDC