The Wednesday Takeaway
On Monday, the Cubs made their way into Pittsburgh to face off with the Pirates in what figured to be an early-season litmus test for both teams. A playoff rematch! A playoff preview!?! And, more importantly, the first good team either club had faced outside of a single series apiece against St. Louis.

But by Wednesday evening, Pittsburgh was sacked. The Cubs rode off with a three-game sweep, a six-game lead in the NL Central, the biggest buffer of any first-place team, and a run differential–159 to 66–that defies belief. Early-season stats will always tighten, but the Cubs have scored the most runs in baseball, allowed the fewest, and made it clear to Pittsbugh that it's going to take some kind of massive effort to reorient this race.

At first glance, a 6-2 victory figures to be about as ho-hum as it gets, but there were some wobbles. In the fourth inning, trailing by three, the Pirates managed to load the bases with nobody out. Jon Lester not only escaped with the lead intact, but without allowing a run. Strikeouts of Sean Rodriguez and Gregory Polanco were interrupted only by a shallow popup from Josh Harrison. 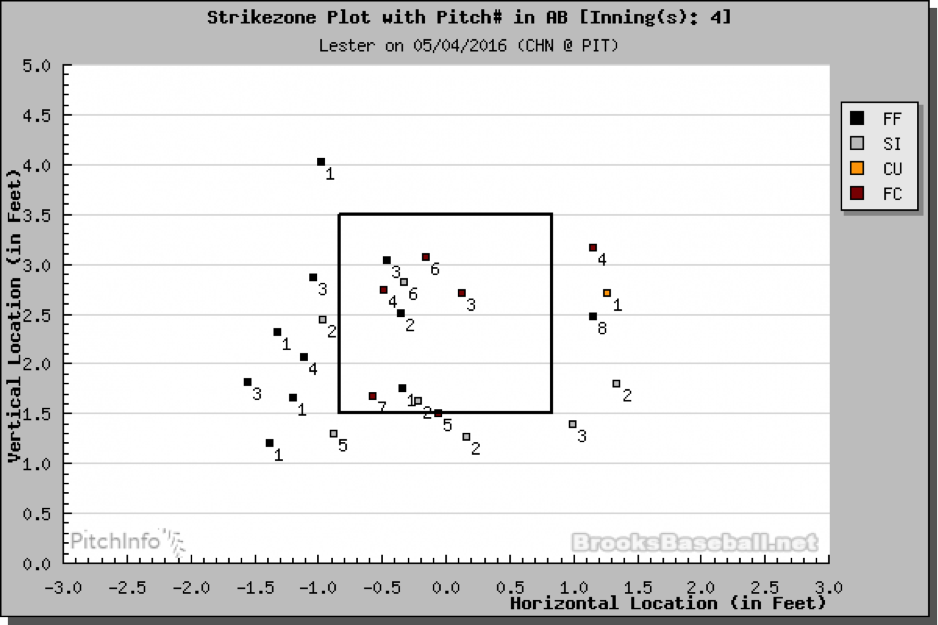 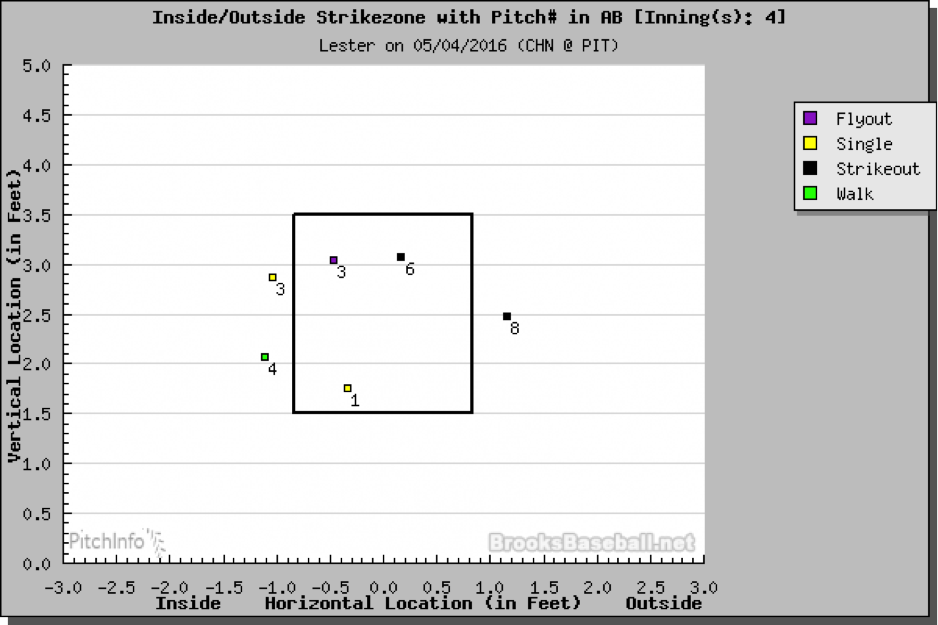 Lester ran into more trouble in the fifth, as the Pirates put two runners on the corners with only one out. This time, he struck out David Freese and Starling Marte. Lester only whiffed five batters in the game, and four were in these two crucial situations.

On top of the magic that he pulled out of his hat in the fourth and fifth inning, he pulled a magic trick with his glove in the second inning. Weirdly enough, this is starting to become a trend for Lester—he pulled this same trick last season.

Lester only went 5 â…” innings, but his navigation through the choppy waters ending up being vital. Those two innings were the closest brushes with serious danger that the Cubs had, especially after Anthony Rizzo homered to extend the lead to 5-0. The Cubs would end up winning 6-2, the closest game in the series, which the Cubs "won" 20-5 by run differential. Meanwhile the team with the second-best run differential in baseball won by 11 on Wednesday; that moved their own positive figure to +50, barely half of the Cubs' cumulative advantage.

Quick Hits
The Cubs weren’t the only team who reaped the benefits of a series sweep on Wednesday. The Mariners completed one of their own as they finished off the A’s 9-8. The game was as exciting as the score would indicate, and it included a wild fifth inning that saw the teams score a combined 10 runs. It also included Nelson Cruz darned near liquefying this baseball:

While the A’s quit scoring after that prolific fifth inning, the Mariners missed the cue and didn’t stop. Dae-Ho Lee would go on to hit two homers from that point—a solo shot in the sixth and then a two-run shot in the next inning to put the current leaders of the AL West in front for good.

While the Blue Jays didn’t join the sweep club this week, they did string together two consecutive walk-off victories. The hero for Wednesday’s win was Russell Martin, who dropped a fly ball onto the right field warning track to bring home the game-winner. Between the past two days and the madness that happened in that stadium back in October, it’s safe to say that the Rangers are sick of the Rogers Centre.

Back on April 23rd, Corey Kluber faced the Tigers and went eight innings. He left that game with 10 strikeouts and only two hits allowed, and his only real blemish was allowing a home run to Jarrod Saltalamacchia. If the Tigers didn’t get enough of Kluber that day in Detroit, they're clearly puking up Kluber bits after Wednesday's game in Cleveland. Kluber pitched a complete game, five-hit shutout with seven strikeouts. So, in his past two starts against the Tigers, he’s pitched 17 innings, struck out 17, and only given up a single run. The good news for Detroit is that it won’t see Cleveland again until late June. Maybe by then they’ll have Kluber figured out. On the other hand, maybe that just means six weeks of sleepless nights and quiet dread.

Defensive Play of the Day
Brandon Drury had himself an adventure on this play. He had to cover a pretty big swath of ground and ended up having to tumble over the fence in foul territory and fell into the first row of seats in order to make the catch. Meanwhile, after watching another man fall onto the cement ground, both fans nearby decided that the best course of action was to take a selfie. We're very much not ones to selfie-shame anybody in 2016, but… you know, we're all in this together, guys.

What to Watch on Thursday
Remember the note at the end of The Wednesday Takeway about how the Cubs and Nationals had the two best run differentials in baseball? Well, guess who’s starting up a four-game series on Thursday? Since we’re still in the early portion of the regular season, it might feel like a stretch to call this a postseason preview, but at 97 percent and 83 percent, the Cubs and the Nationals are, respectively, the most and third-most likely playoff entrants, according to our playoff odds. Furthermore, if the Pirates series was a heat check for the Cubs, this is more like a contested 35-footer. If the Cubs keep winning this weekend, against those Nationals, we might start to have some real serious conversations.