The Monday Takeaway
For those who sought to go out on a limb with their World Series picks this spring, the Rangers represented an alluring dark horse. They were so alluring, in fact, that, at least in this neck of the woods, the horse in question wasn’t dark at all. Five BP’ers, including yours truly, pegged Texas to go all the way in 2016, giving Jeff Banister’s club more backing than any other except the Cubs.

The Rangers had plenty going for them as a tempting pennant pick. They’d have a full season of Cole Hamels. They sported a breakout candidate in Rougned Odor. They’d added a cheap, high-upside bat in Ian Desmond near the end of the offseason. And, beyond all that, the injury-ravaged 2015 outfit had managed to win 88 games and the American League West. But, while I can’t speak for my colleagues, the determining factor behind my preseason vote was the potential for internal reinforcements to greatly bolster the roster midyear.

In that regard, the past two days have provided ample vindication, though of course no rings or trophies are awarded for successful rehab starts and one-run victories in May. On Sunday, Yu Darvish—on the mend from Tommy John surgery—touched 97 and snapped off a hellacious curveball in a 32-pitch outing for Double-A Frisco. He’ll ramp it up to 45 pitches for Triple-A Round Rock later this week and remains on track to return by June.

Meanwhile, top prospect Nomar Mazara’s call to the big club came sooner than expected, on April 10th, when Shin-Soo Choo went on the disabled list. Mazara wouldn’t turn 21 until April 26th, but his polish on both sides of the ball gave him a tremendously high floor, and offered reason to believe that he might contribute meaningfully out of the gate. That he did, with a three-hit major-league debut. And, as Mazara’s tenure in the majors near one month, his carrying tools continue to translate into Rangers wins.

Yesterday was, perhaps, the greatest example of that yet. The Blue Jays and Rangers were tied, 1-1, heading into the eighth, following a baserunning blunder by Delino DeShields that, upon review, cost the visitors a run in the top of the seventh:

Mazara was on deck when the double play ended that frame, and he rendered the mistake moot with a leadoff homer to begin the eighth:

But even that big fly was barely enough to secure the win Monday. How barely? 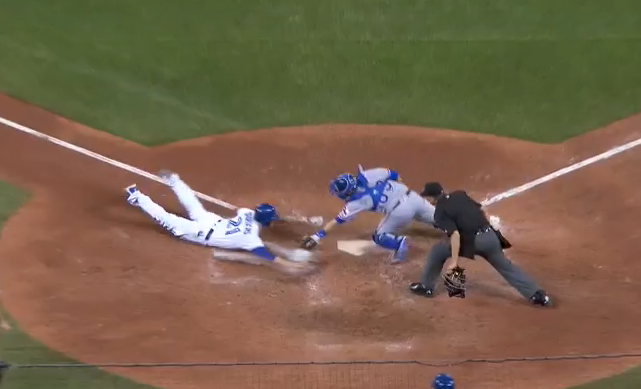 That barely, as it took a near-perfect shot home from Mazara, the right fielder, to gun down Michael Saunders attempting to score on Troy Tulowitzki’s bases-loaded fly:

After replay upheld the call by plate umpire Chris Conroy to end the eighth, Shawn Tolleson nailed down the 2-1 win in the ninth.

And with it, the AL Rookie of the Month for April has the first bullet point on his case to repeat in May.

Quick Hits from Monday
If all hits were created equal, the Braves would have beaten the Mets yesterday, for the visitors had nine knocks to the hosts’ eight. But that’s not how baseball works, and shortly after the Braves squandered a single and a double in a scoreless top half of the first, the Mets gave Mike Foltynewicz a rude welcome back to the majors.

The 24-year-old Foltynewicz knows all too well that serving up long balls is a perilous endeavor. Foltynewicz was taken deep 17 times in just 86 2/3 innings last year, or 1.8 per nine, the second-worst rate among pitchers who logged at least 80 frames, trailing only Kyle Kendrick, who toiled at Coors Field. The right-hander got a late start to his 2016 campaign, beginning the year on the DL while recovering from the life-threatening blood clot that cut short his 2015 season, but he returned Monday and picked up right where he left off.

Two batters into Foltynewicz’s evening, David Wright launched a 3-2 fastball that caught too much of the plate well into the left-field stands:

Two batters after that, Yoenis Cespedes got his own center-cut fastball and didn’t miss it either:

Next up, Lucas Duda took his turn, mashing—you guessed it—a fastball mistake over the plate:

And just like that, the Mets had four runs on three bombs in the opening frame. The Braves, you might’ve heard, have gone yard just five times all season. None of their nine hits cleared a fence Monday, as Bartolo Colon turned in eight shutout innings before Jeurys Familia stumbled in a non-save situation before recovering to secure the 4-1 win.

Also on a dinger binge Monday were the Cardinals, whose yardwork began with pitcher Adam Wainwright wielding the rake:

That three-run second-decker left Wainwright’s bat at 105.4 mph, and it wasn’t even his hardest-hit ball of the night:

The right-hander’s pitching hasn’t been up to par in the first month-and-change of the season, but his bat—marked by an .818 slugging percentage—remains A1. As for the arm, well, Wainwright matched a season low by allowing three runs to the Phillies on five hits and a walk in six innings of work. Three runs plated, three runs permitted is a tradeoff the Cardinals were happy to make, particularly because just moments after Wainwright was through on the hill, Matt Adams punished an elevated curveball from Jeremy Hellickson:

The Cardinals would go back-to-back against in the seventh, with Kolten Wong and Randal Grichuk doing the honors, the latter as a pinch-hitter for Wainwright. Together, those five homers were more than enough to halt the Phillies’ six-game winning streak in a 10-3 romp.

Steve Bedrosian’s son faced six Brewers on Monday and struck out five of them. As ways to make a name for oneself go, becoming the eighth reliever since 1990 to record five Ks in 1 2/3 innings on less than 25 pitches isn’t a bad one. The one batter Cam Bedrosian couldn’t strike out was Ryan Braun…

…who hit the ball about 30 feet. That infield single made it 8-2 Brewers.

With lady luck smiling down on him, just about the only way to retire Braun these days is to pick him off of first—which Jered Weaver did, after Braun singled leading off the fourth. When he came to bat in the fifth, 2-for-2 on the day with a double in the first, Mike Scioscia had an open base and decided to use it, giving the red-hot Braun the four-finger salute. And to that, Jonathan Lucroy said, “Thanks for the extra RBI”:

By the time Bedrosian got around to whiffing everyone besides Braun, it was 7-2 Milwaukee, and after Braun’s RBI infield knock, it was 8-2. The Brewers would go on to win 8-5. 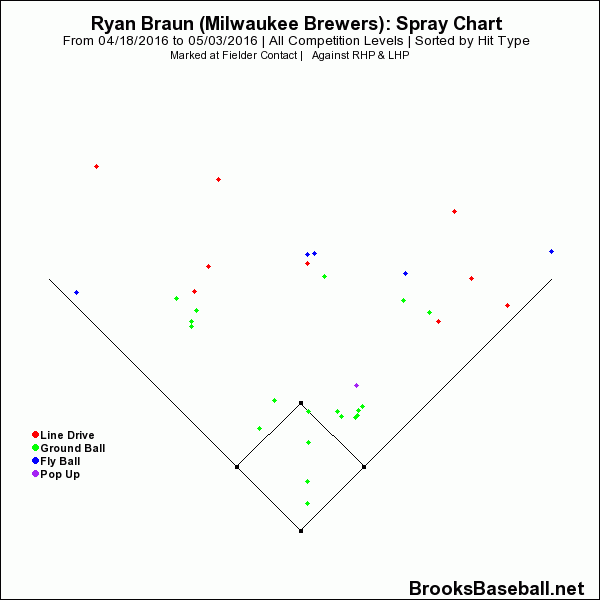 with only a bout of “general soreness” threatening to slow him down:

and Dallas Keuchel is losing games at home:

Dallas Keuchel’s loss tonight vs @Twins is his 1st at home since 8/10/14, snapping a 22-game streak without an L. pic.twitter.com/QiocAuCgM4

Keuchel, who walked five in just 4 1/3 innings Tuesday, was outdueled by rookie Jose Berrios, who also handed out a handful of bases on balls but made up for them with eight punchouts in 5 1/3. The Twins bullpen held the Astros scoreless the rest of the way in the 6-2 decision that left the sides with matching records of 8-18.

The Defensive Non-Play of the Day
Even the best defenders aren’t immune to the occasional embarrassing miscue. This drive to deep center by Daniel Murphy wouldn't have been a routine play for most outfielders, but it should’ve been for Lorenzo Cain:

Cain appeared to misjudge it initially, then sauntered back at something less than his terrific top speed, and eventually had it clank off the edge of his outstretched glove. Ordinary effort it was not, and so the official scorer awarded Murphy his 1,000th career hit. But it was the sort of play we’ve become accustomed to seeing Cain make in his sleep, which made it all the more jarring when he didn't come up with the ball.

Cain was also caught stealing third with two on and two down in the third,

and the center fielder’s tough night became tougher still when the Nats prevailed 2-0.

What to Watch on Tuesday
After a red-hot start to the year, Yasiel Puig’s had a rough go of it at the plate over the last two weeks. The Dodgers outfielder is 5-for-43 in his past 11 games, with just one walk and 12 strikeouts, good for a .116/.136/.233 slash line. His spray chart during that span is as ugly as the numbers: 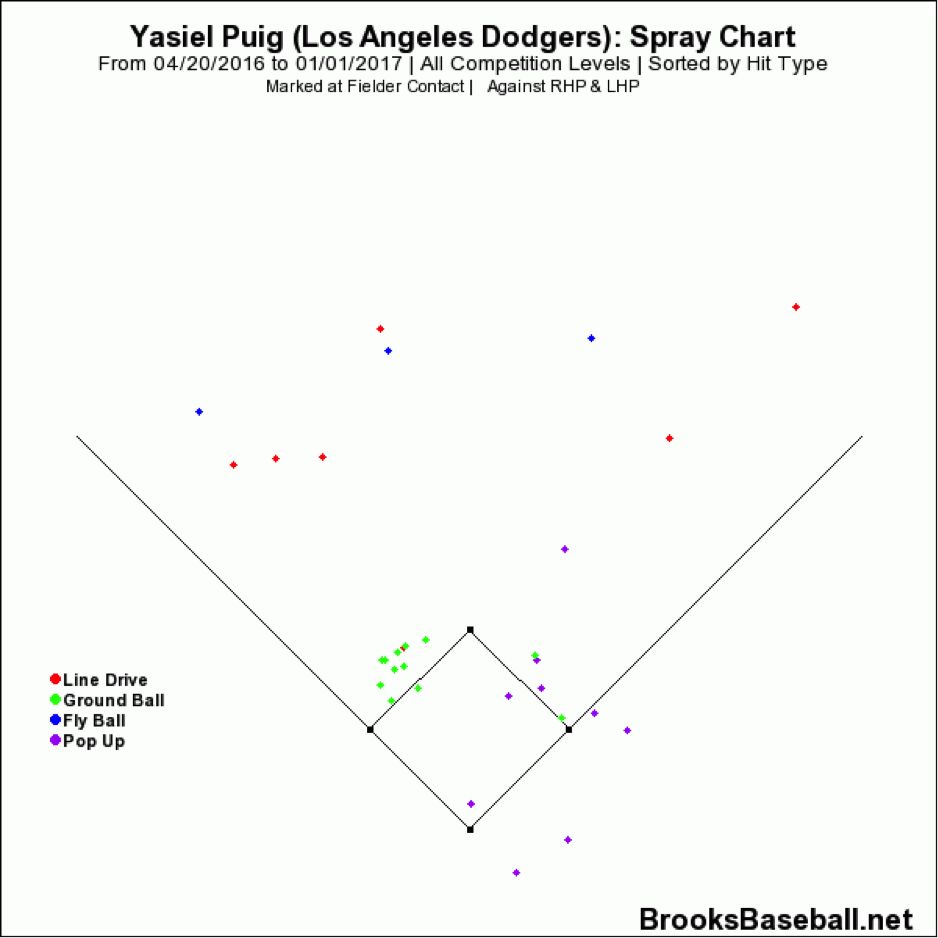 That there is a lot of right-side popups. Back to the numbers: Over the last 14 days, Puig’s infield-flyball rate is a whopping 53.3 percent, 20 percentage points higher than that of the second-place popper-upper, the now-suspended Dee Gordon. And what’s especially troubling about Puig’s recent spate of infield flies is that he’s not popping up anything in particular. He’s popping up pitches in all corners of the zone: 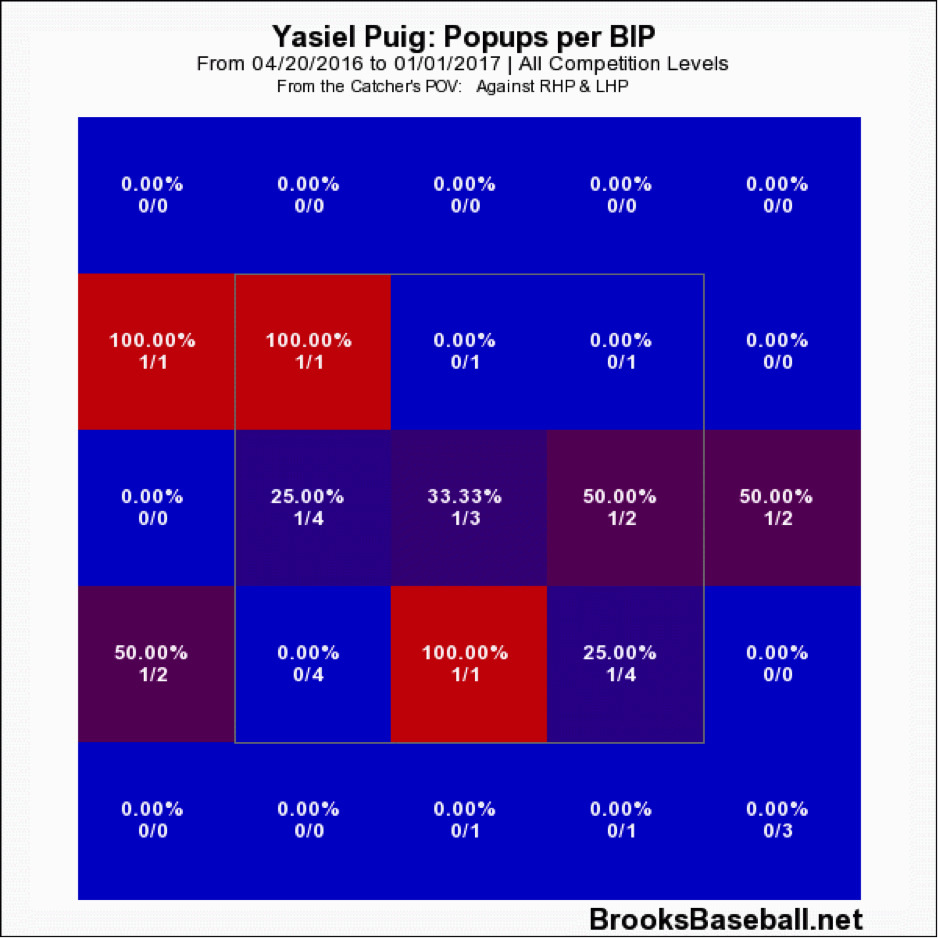 The Dodgers gave Puig the day off on Saturday and they were idle Monday while traveling to Tampa, so he’s now had a couple of days to clear his head. Puig will look to start squaring pitches up again this evening, when former Ray Scott Kazmir takes on current Ray Matt Moore in game one of three at the Trop (7:10 p.m. ET).

Eddie Butler’s first two tours of major-league duty ended poorly, in large part because his strikeout-to-walk ratio was underwater at 47-to-49. The right-hander fixed that in a 2 1/3-inning relief appearance on April 27th, striking out four without issuing a free pass to get his ratio back over 1.0. Now, with Jorge De La Rosa on the disabled list with a groin strain, Butler has an opportunity to reclaim a spot in the Rockies rotation.

The 25-year-old Butler was holding his own in Triple-A Albuquerque when the call to the majors came last week, posting a 14-to-6 K:BB while allowing just one home run in 22 innings over four starts. Since his first big-league start of the year will come at Petco, he’ll be taking on better hitters this evening, but doing so in a friendlier environment than his recent Triple-A home.

Butler’s opposite number will be Andrew Cashner, who got one more out than Butler did on April 27th. The problem is, Cashner did so as a starter, and he needed 89 pitches just to record those eight outs (10:10 p.m. ET).